Accessibility links
Next To The Original, France Replicates Prehistoric Cave Paintings : Parallels The public is barred from the cave paintings in Lascaux in order to preserve them. But a new museum has created an exact replica right next to the cave.

Listen · 4:16 4:16
Next To The Original, France Replicates Prehistoric Cave Paintings 4:16 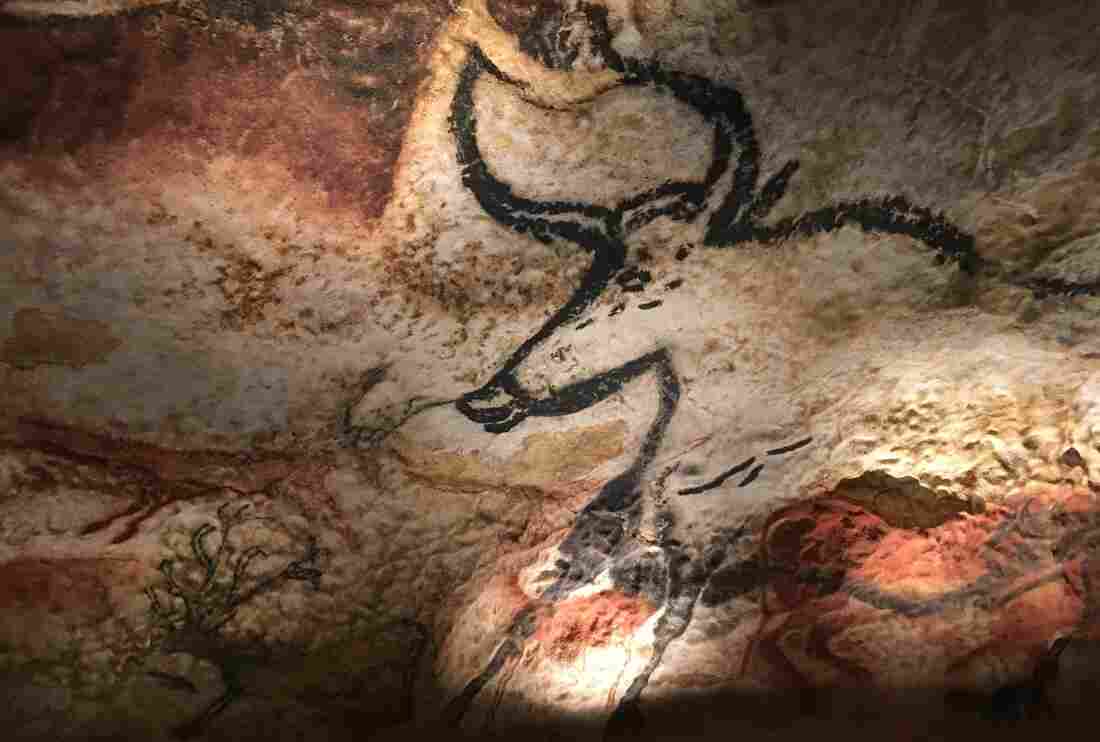 The French government has bulit an exact replica of the prehistoric paintings in Lascaux, next to the originals. This photo was taken in the replicated cave. The originals were painted some 20,000 years ago, but are closed to the public to protect the artwork. Eleanor Beardsley/NPR hide caption 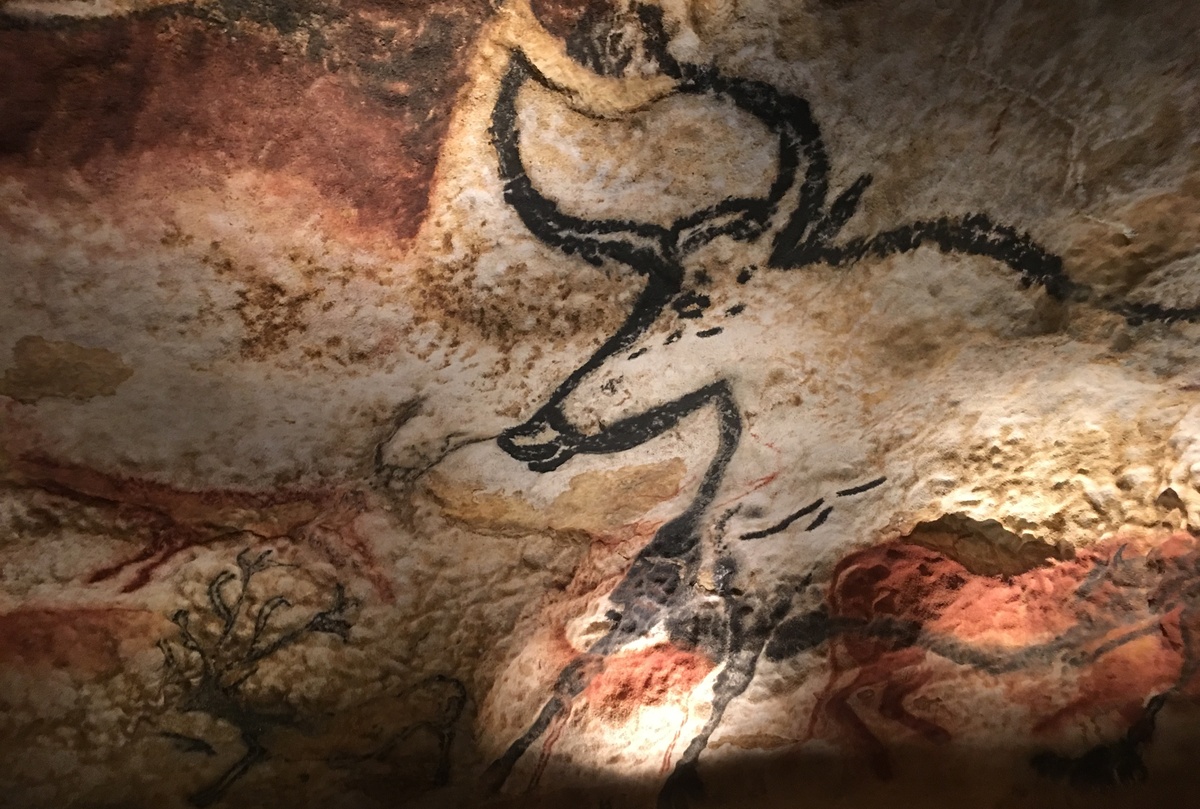 The French government has bulit an exact replica of the prehistoric paintings in Lascaux, next to the originals. This photo was taken in the replicated cave. The originals were painted some 20,000 years ago, but are closed to the public to protect the artwork.

On a September day in 1940 while much of Europe was engulfed in war, four teenagers were walking through a forest in southern France when their dog fell down a hole.

As they called for it they heard an echo. Crawling in to rescue the dog, the boys discovered a cave with hundreds of prehistoric animals painted across its walls and ceiling. It turned out to be one of the world's best examples of prehistoric art.

The Lascaux cave became a popular tourist site after World War II. But it had to be sealed off to the public in 1963 because the breath and sweat of visitors created carbon dioxide and humidity that would damage the paintings.

Now the French government has spent $64 million building a near perfect replica to recreate the original cave — and the emotions of that first discovery.

To see the replica, which is next to the actual cave, you begin outside, at the top of the adjoining museum. Visitors walk slowly down toward the cave entrance. All the while, sounds of the surrounding forest on a summer day are played on speakers. This specific order to the visit, referred to as the museum's sequencing, is important to recreating an authentic experience, says Dina Casson, who was part of the team that worked on the museum's design.

"When you visit the original cave, you're actually walking through the forest with these sounds," says Casson.

Casson says recreating the impression of going underground and coming out again – from light to darkness to light again is also important. One member of her team was allowed into the original cave.

"That was one of the things that he said was so powerful," says Casson. "This sense of being outside, then inside, then outside."

Once inside the replica, the temperature is cool and constant, just like the real cave. As eyes adjust to the darkness there are suddenly animals everywhere.

The more than 600 paintings and a thousand engravings in the actual cave were done 20,000 years ago. Using a laser light to point out details, archeologist Jean-Pierre Chadelle says these early human artists used very advanced techniques.

A museum is built over the replica of the Lascaux cave and its paintings. Eleanor Beardsley/NPR hide caption

A museum is built over the replica of the Lascaux cave and its paintings.

"You can see how they used a magnesium pencil for the black horns of this bull," he says. "And for the softness of the muzzle they used another technique. They blow dried paint made from natural ochre colors through a tool crafted from hollow bird bones."

Chadelle used to give tours in the original cave, which he says eventually became a victim of its own success.

"There were so many visitors that people were passing out inside the cave from all the carbon dioxide."

Chadelle says in the 1950s the hole the boys climbed through was opened up so a giant fan could be installed to help circulate the air.

"That's why this replica is almost more real than the real cave," says Chadelle. "Because it has that original hole the boys climbed through."

Guillaume Colombo is the director of the new cave and museum complex at Lascaux. He says the art was so well preserved for so long because the cave was sealed tight — like a cork in a champagne bottle.

"So the cave wasn't affected by sudden temperature changes," says Colombo. "And another reason it was protected is there's a layer of clay in the soil that waterproofs the cave. That's why Lascaux has no stalactites or stalagmites. It's a dry cave."

Standing in the first big room of the cave replica, known as The Hall of Bulls, prehistorian Jean Clottes says the animals don't really represent what these Cro Magnon humans would have hunted and eaten at the time.

"That would have been mammoth or reindeer," he says.

Clottes says the many bulls and horses were likely animals that played a role in the beliefs and spiritual life of these early humans.

There are many mysteries surrounding the Lascaux cave paintings. For example, experts don't really know how long it took to complete them.

"There was a code and a certain style they all follow, so we are pretty sure they were done by a small group, and in just a few years," says museum director Colombo. "But we don't know if it was a few years within a hundred years or a thousand years." Colombo says the paintings were most likely done by a couple generations of painters who passed down the knowledge. 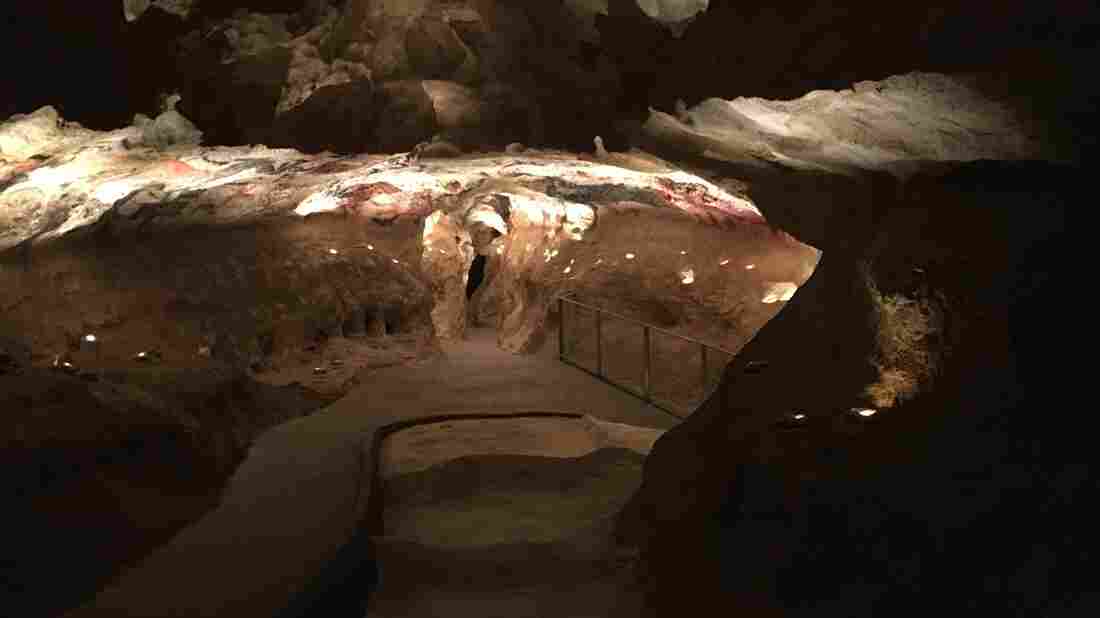 Artists used 3D digital scanning to make an exact replica of the original. The cave was discovered by a group of boys in 1940, but was closed in 1963 because the presence of humans was threatening to damage the paintings. Eleanor Beardsley/NPR hide caption 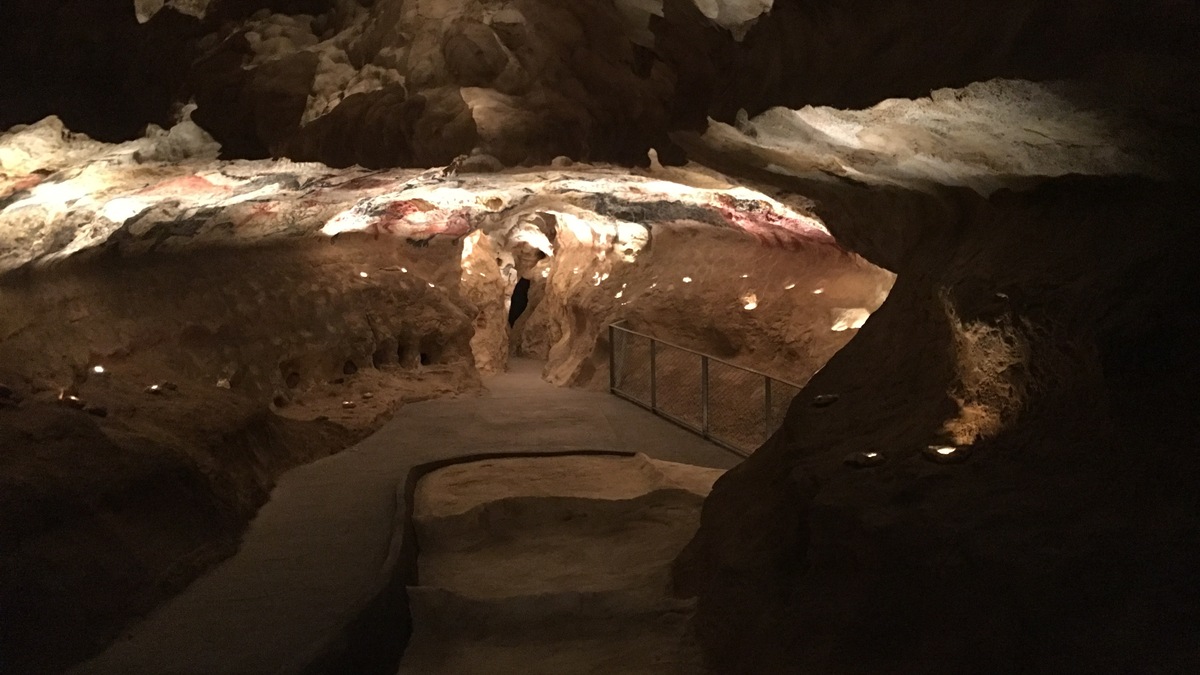 Artists used 3D digital scanning to make an exact replica of the original. The cave was discovered by a group of boys in 1940, but was closed in 1963 because the presence of humans was threatening to damage the paintings.

Such questions can be explored in interactive exhibits in the museum. Each visitor is offered a personalized tablet available in 10 languages. The glass museum looks as if it was slipped into a fault line on the hillside.

Norwegian Thorsen Kjetilis is one of the architects. He calls the museum a link between past and present.

"It is a very contemporary building cut into the landscape and out of the landscape," says Kjetilis. "It's just at the borderline between the vertical forest where the original cave lies behind us, and the horizontally of the farmlands in front."

The whole complex, known as Lascaux IV, is the third and most ambitious attempt to replicate the famous cave. It is precise down to three millimeters thanks to 3D digital scanning of the actual cave. Every nook and cranny is recreated using polysterine and resin, and the latest fiberglass techniques.

Francis Ringenbach led the team of 34 artists who reconstructed the cave walls and ceilings and then copied the paintings onto them. He calls the three-year job "colossal."

Ringenbach says to reproduce the art, high-definition images of the paintings were projected onto the walls and copied pixel by pixel. 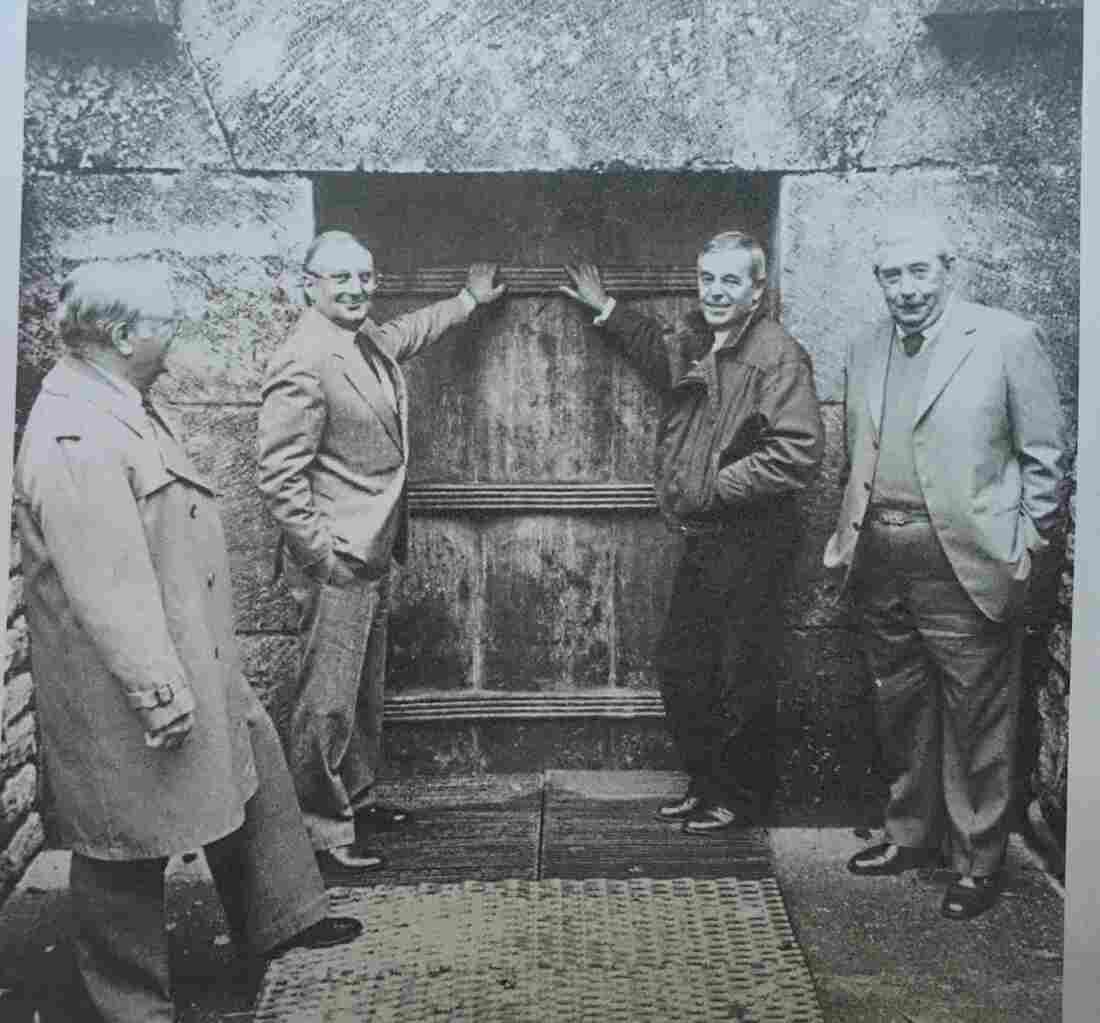 These four men found the Lascaux cave paintings in 1940. They returned to the cave entrance for this 1986 photo. From left to right, they are Georges Agniel, Simon Coencas, Jacques Marsal and Marcel Ravidat. Courtesy Lascaux Museum hide caption 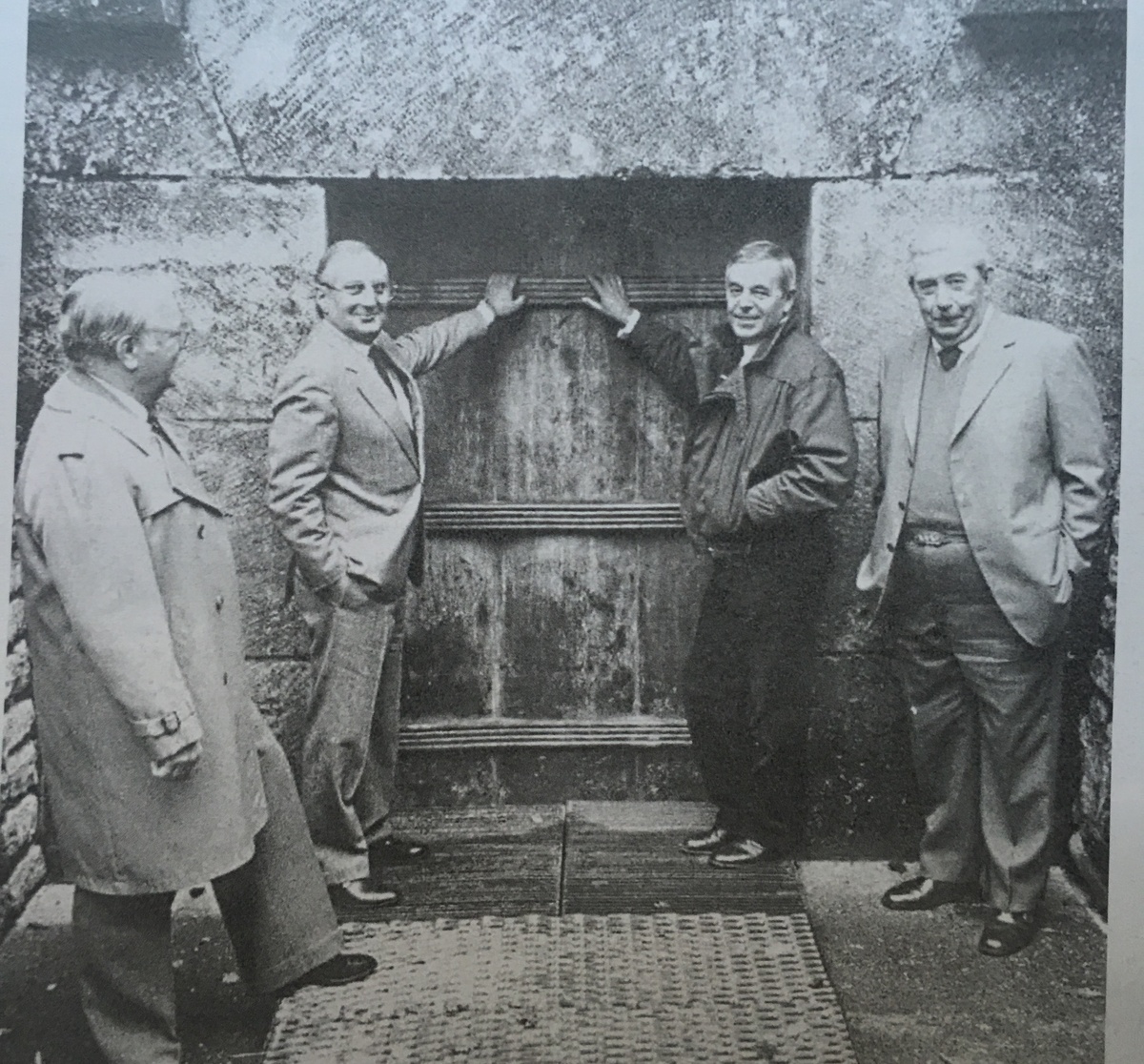 These four men found the Lascaux cave paintings in 1940. They returned to the cave entrance for this 1986 photo. From left to right, they are Georges Agniel, Simon Coencas, Jacques Marsal and Marcel Ravidat.

The painstaking work gave them a real appreciation for the skills of the prehistoric artists. Ringenbach says they had a real level of mastery, and used the surface of the cave.

"These animals are not positioned by chance," he says. "For example, the eye of this bison is not engraved, it's a natural cavity they exploited to make the eye."

Ringenbach says the more his team worked, the more astonished they were.

"Putting ourselves in the context made us realize how difficult the conditions were. They were working in darkness and working from memory to do these compositions."

Ringenbach said the prehistoric painters would also have had scaffolding that was fairly comfortable. "They certainly weren't working on a branch."

At times, he says the copy job became emotional.

"There were moments when I realized that I must be doing the exact gestures and movements of the prehistoric artist. And that's when a little shiver would go down my spine," he says.