Accessibility links
Desmond Tutu At 85 Calls For The Right To An Assisted Death : Parallels Euthanasia is illegal in South Africa, but the Nobel Peace Prize laureate has spoken out recently in support of the option to choose. He has long lived with prostate cancer. 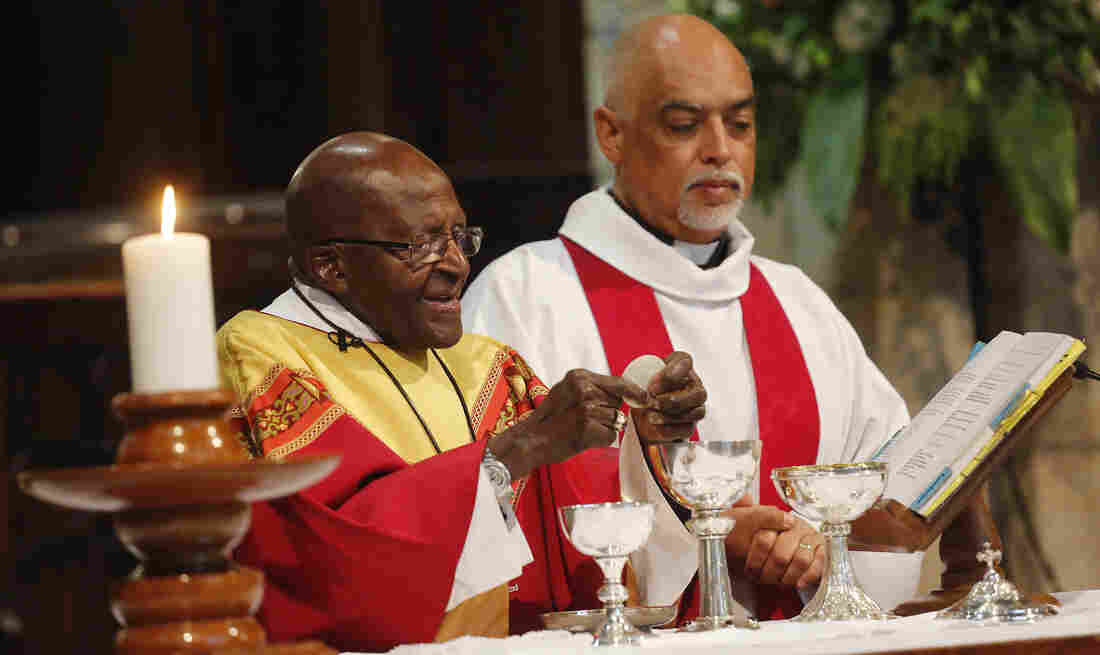 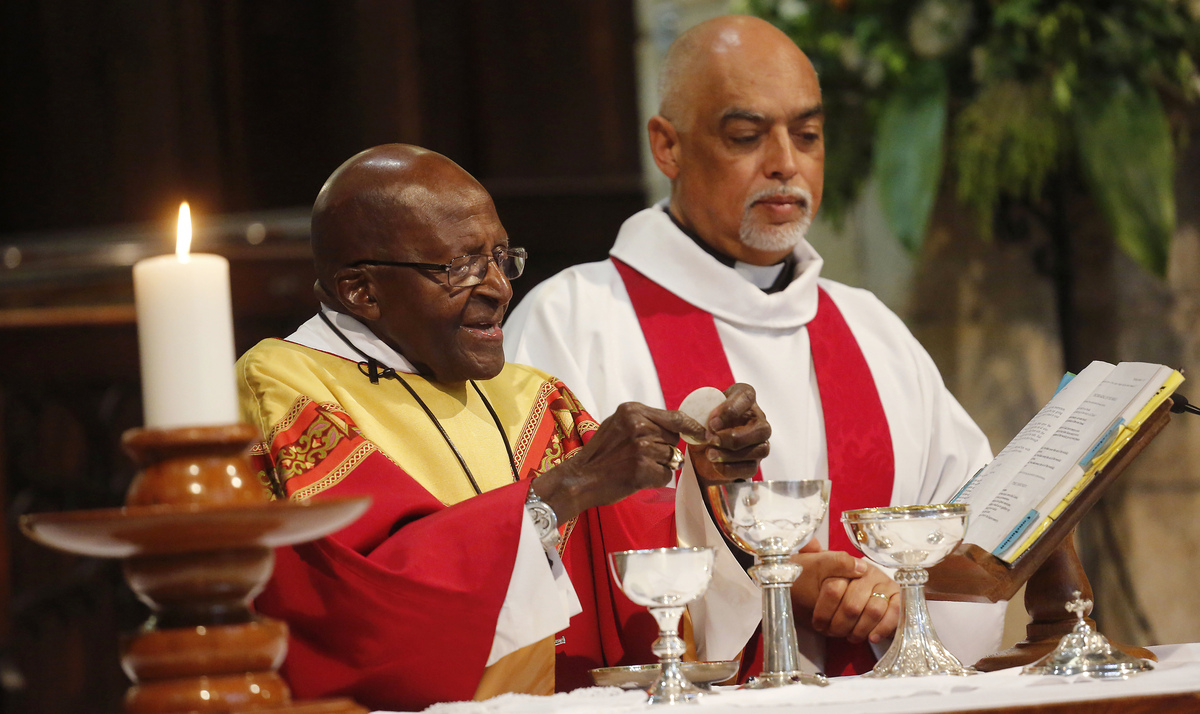 Anglican Archbishop Emeritus Desmond Tutu (left) celebrates Mass on his 85th birthday at St. George's Cathedral in Cape Town, South Africa, on Oct. 7. Tutu has called for the right to assisted death, which is currently illegal in his country.

Desmond Tutu, South Africa's former Anglican archbishop and a Nobel Peace Prize laureate, recently celebrated his 85th birthday with an interesting message: He wants the option of an assisted death.

Tutu has largely retired from public life, but is still considered the moral conscience of South Africa for his leading role in the fight against apartheid. Some were taken aback when Tutu said he wants the option to end his life when he chooses.

"As a Christian, I believe in the sanctity of life, and that death is a part of life," Tutu said in a recent video. "I hope that when the time comes I am treated with compassion and allowed to pass on to the next phase of life's journey in the manner of my choice."

An assisted death is currently illegal in South Africa. The Supreme Court of Appeal reaffirmed that stance in December when it struck down a lower court's ruling that granted an applicant the right to an assisted suicide.

Tutu, who has lived with prostate cancer for decades and has been in and out of the hospital in recent years, says he supports efforts around the globe to legalize the procedure.

"I pray that politicians, lawmakers and religious leaders have the courage to support the choices terminally ill citizens make in departing Mother Earth with dignity and love," he said.

Desmond Tutu, 85, the former Anglican Archbishop of South Africa, says he supports the right to ethanasia.

Tutu made that video for advocacy groups that support so-called death-with-dignity laws.

At the St. Alban's Anglican Cathedral in the capital Pretoria, the organ starts to play as parishioners file into the century-old stone church, which sits among tall government buildings.

Musima Gwangwa, who is attending the service, says Tutu's leadership in ending apartheid, and the stances he has taken on human rights around the world, serve as a model that Anglicans like her should try and emulate.

"He's more than an icon for us," she says, adding that she supports his position.

Not all parishioners agree. For Richard Botha, the archbishop's decision is a confounding one. He calls Tutu a global elder and someone who is willing to call out leaders for poor judgment.

But Tutu's support for assisted death does not comport with Botha's religious beliefs.

But he's been making his feelings known in editorials in which he described as "disgraceful" Nelson Mandela's final days before his death in 2013. He described how Mandela, widely known as Madiba, was used as a political prop in photo ops, despite being unable to communicate.

"It was an affront to Madiba's legacy," Tutu wrote in The Guardian newspaper in 2014.

He went on to argue that South Africa needed to revisit its laws regarding a person's right to die.

South African judges wrote in their recent ruling that they would welcome action by Parliament, meaning the legislature, and not the courts, should determine whether assisted death will be permitted in South Africa.

Advocates for assisted death could take the case to the Constitutional Court.

Whatever the outcome, right-to-die advocates say Tutu's support for the issue can guide conflicted people across the globe.

"It helps to hear a person who has dedicated his life to religion, and about whom there's no question they are deeply religious, say there's no incompatibility in religious faith and medical aid in dying," says Barbara Coombs Lee, who leads Compassion and Choices, a group that lobbies for assisted death in the U.S.