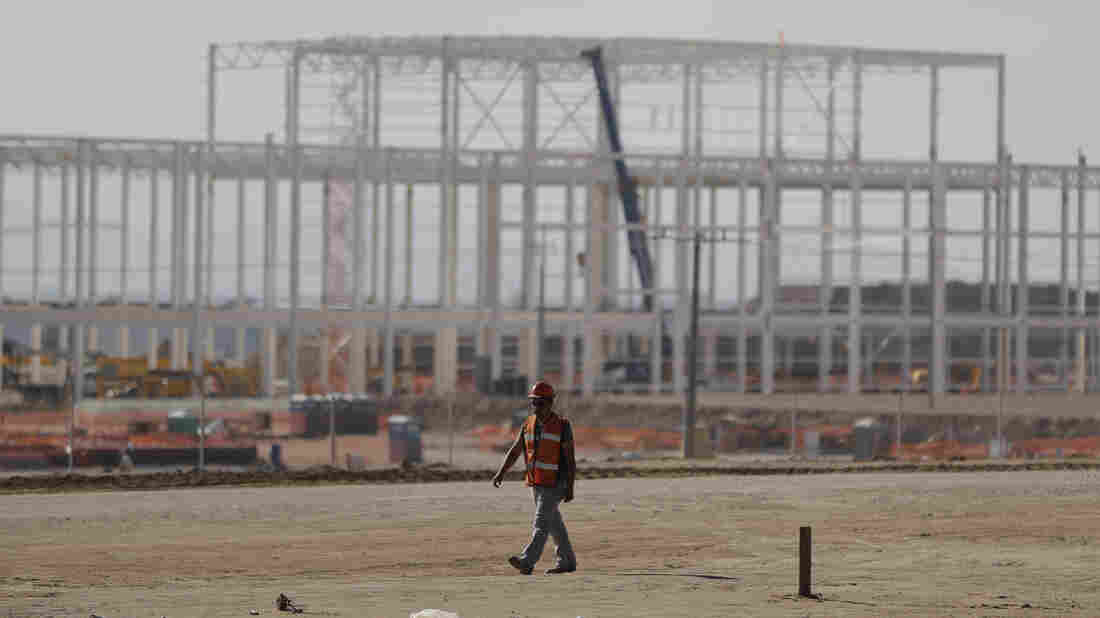 A man walks past a nearly deserted construction site Wednesday in Villa de Reyes, San Luis Potosi, Mexico, as workers shut down operations and remove equipment from the site of a canceled $1.6 billion Ford plant. Ford's cancellation, which costs the region thousands of projected jobs, has sounded alarms in Mexico and sent its currency tumbling. Rebecca Blackwell/AP hide caption 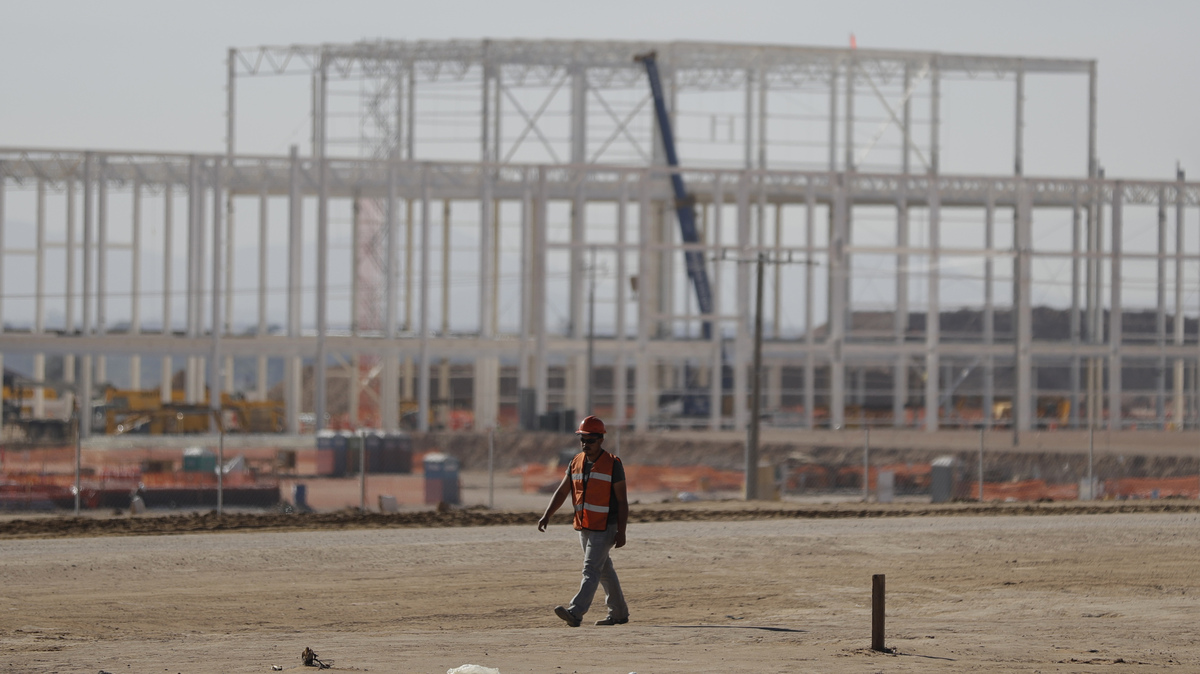 A man walks past a nearly deserted construction site Wednesday in Villa de Reyes, San Luis Potosi, Mexico, as workers shut down operations and remove equipment from the site of a canceled $1.6 billion Ford plant. Ford's cancellation, which costs the region thousands of projected jobs, has sounded alarms in Mexico and sent its currency tumbling.

Ford Motor Co.'s decision this week to cancel construction of an auto plant in Mexico has shocked that country, causing the peso to slump and stirring up outrage toward President-elect Donald Trump. Anger is high toward the incoming U.S. president in the state where the Ford plant was under construction — and was slated to employ nearly 3,000 local workers.

Usually the dusty construction site of the now-shuttered Mexican Ford auto plant is full of activity. Now only one large tractor can be seen grading roads at the 700-acre site, located outside the small town of Villa de Reyes in the central Mexican state of San Luis Potosi.

Guards at the site's entrance say the mood is very tense and that the situation is deeply discouraging.

"We all thought this was a long-term project," says Juan Gonzalez, who had hoped to stay on when the Ford plant opened in three years.

Gustavo Puente Orozco, San Luis Potosi's secretary of economic development, says the news, while not totally unexpected, came as a shock. Donald Trump began putting a lot of pressure on Ford to pull out of Mexico during the campaign, but Puente says Ford officials in Mexico kept assuring him the project was moving forward, and he says construction kept going.

Ford says market forces prompted it to cancel the Mexico plant — small cars, like the Ford Focus that was to be built there, just haven't been selling well, especially with low gas prices.

In Mexico, Why Gas Prices Are Up And The Peso Is Down

In Mexico, Why Gas Prices Are Up And The Peso Is Down

The scrapped project adds to a rough start to 2017 for Mexicans. Gas prices in the country spiked by as much as 20 percent in some parts of the country on Jan. 1, when the government lifted long-imposed subsidies. The peso dropped nearly a full percentage point on the Ford news, and there are fears that inflation is going to rise above 4 percent this year.

Protests have broken out every day since the gas prices spiked, with demonstrators blocking major highways and thoroughfares in states throughout the country.

Near the scuttled Ford plant in the nearby town of Villa De Reyes, residents are directing most of their anger about Mexico's woes at the American president-elect.

As music blares from a food stall in the town's small outdoor market, housewife Maria de Jesus Ramirez Martinez gets visibly angry when asked about the Ford plant closure.

"Trump is blaming us Mexicans for everything ... and it's not right ... it's just not right," she says. Ramirez says the town was counting on those jobs and that without them, more Mexicans will head north to the United States to find work.

San Luis Potosi has been a bright spot in Mexico's otherwise sluggish economy; with so many international companies here, unemployment is officially below 3 percent, and the region has been growing at twice the pace of the country as a whole.

On Villa de Reyes' small town plaza, Salvador Guerra, now retired, says he doesn't want to see the state's gains be undermined by Trump, who's not even president yet.

"Imagine what he's going to do to us once he takes power," says Guerra. And Guerra says he's just as mad at Mexico's leaders, who he says haven't done enough to stand up to Trump. On Wednesday, Mexican President Enrique Pena Nieto announced a shakeup in his Cabinet, appointing a former finance adviser as the new foreign minister, who Pena Nieto says will push for a more constructive relationship.

"It should be a relationship that allows us to strengthen bilateral ties," says Pena Nieto. And, he adds, one that doesn't undermine the sovereignty or the dignity of Mexicans.