Accessibility links
U.S. Troops Arrive In Poland, But Will Trump Keep Them There? : Parallels U.S. tanks have returned to Europe to help defend Poland and Baltic states from possible Russian aggression. The Kremlin sees it as a threat. 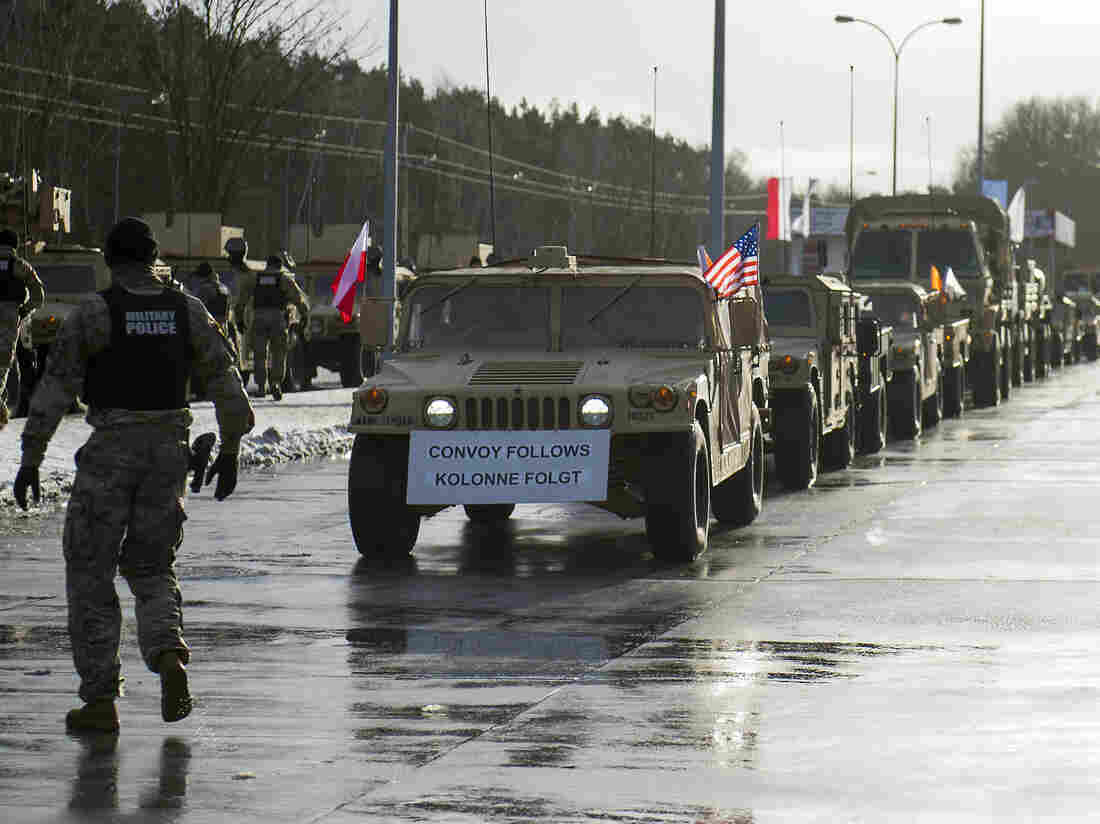 American soldiers are pictured during a welcome ceremony at the Polish-German border in Olszyna, Poland on January 12, 2017. U.S. troops are being deployed in Poland under Operation Atlantic Resolve. The troops will be followed by 87 tanks, 144 Bradley fighting vehicles and 2,500 vehicles being transported by land from Germany. Natalia Dobryszycka/AFP/Getty Images hide caption 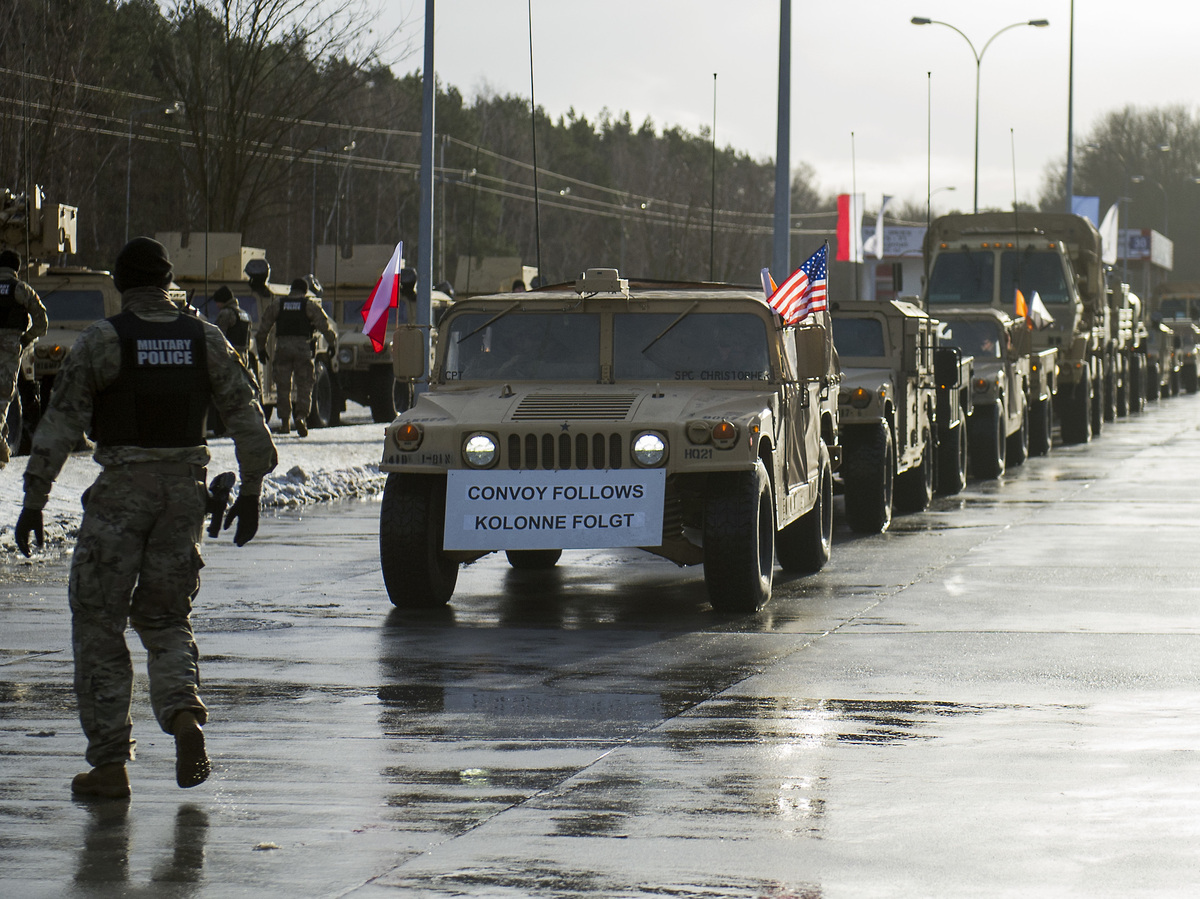 American soldiers are pictured during a welcome ceremony at the Polish-German border in Olszyna, Poland on January 12, 2017. U.S. troops are being deployed in Poland under Operation Atlantic Resolve. The troops will be followed by 87 tanks, 144 Bradley fighting vehicles and 2,500 vehicles being transported by land from Germany.

The 3rd Armored Brigade Combat Team, 4th Infantry Division, from Fort Carson, Colo., has begun moving into Poland as part of the biggest U.S. military deployment in Europe since the end of the Cold War.

It's part of an Obama administration effort to deter perceived growing Russian aggression in Eastern Europe. The Kremlin isn't happy.

"These actions threaten our interests, our security," President Vladimir Putin's spokesman Dmitry Peskov said. "Especially as it concerns a third party building up its military presence near our borders. It's not even a European state."

But for Poles like retired metal worker Andrezej Kozlik, the American presence is something he's come to yearn for since the fall of Communism in 1989. The 62-year-old appeared oblivious to the icy temperatures on Thursday as he patiently waited at a sleepy border crossing 100 miles southeast of Berlin for the U.S. military convoy to arrive.

"We are very happy that the Americans are coming and supporting and protecting us," Kozlik said.

Like many Poles, he's reluctant to name the country he wants protection from.

A former tank man in 1974, in what was then Communist Poland's army, Kozlik said he really wants to see an American tank up close.

But only Humvees and support vehicles were in Thursday's convoy. The brigade's 87 tanks are being moved here gradually on trains and other heavy transport, according to U.S. military spokesmen.

In the nearby town of Zagan — known for notorious POW camps the Nazis set up, including one featured in the 1963 blockbuster The Great Escape – officials and residents waving small American flags celebrated the arrival of what will be a continuous, rotational presence of U.S. and NATO armored brigades in Eastern Europe.

The ramp-up is partly an attempt by President Obama to calm the nerves of NATO's newer members after Moscow annexed Crimea from Ukraine in 2014 and destabilized that country's eastern flank. More recently, the Kremlin deployed nuclear-capable Iskander missiles in Kaliningrad, a sliver of Russian territory between Poland and Lithuania, and conducted military exercises along its borders with former Soviet satellite countries. Russian officials insist the ramp-up is in response to NATO actions.

Polish Army Maj. Gen. Jaroslaw Mika, whose soldiers will be training with some of the U.S. brigade's 3,500 troops, said he's thrilled they are here. He added it's important to "be together, to build our common relationship and to provide more security" — not only for Europe, he said, but the world.

U.S. Army Col. Christopher Norrie, who led Thursday's convoy, was feted by Polish trumpets. He described the new mission as a "cornerstone" to preserving freedom across Europe.

"To arrive at this point so swiftly is proof that when we work as a team ... no challenge is too large to overcome, no distance is too far to cross, when the need arises," Norrie said in Zagan.

But whether President-elect Donald Trump — who is highly critical of NATO — will withdraw the brigade after taking office is a question mark, said Michael Mazarr, associate director of the RAND Arroyo Center's Strategy, Doctrine, and Resources Program.

"I wouldn't see that as likely very quickly, particularly given the likely role of general and secretary of defense nominee [James] Mattis in the process," Mazarr said.

It would be better, he said, "to shoot above that target and go to Russia and say: 'Look, we've had a lot of misunderstandings lately, we recognize that some of what the United States and NATO have done may be perceived by you as provocative. Let's find a way to work this out that might lead to some kind of an agreement where in a year, we're pulling some of those troops back, but we're doing it in concert with Russian withdrawals from the western military districts of Russia.'

"That would seem to me to be the more likely and ultimately more productive kind of response of the new administration to this deployment," Mazarr said.

But in Germany, which is home to the U.S. Army in Europe headquarters, a new populist party with growing support from German voters, wants the American troops gone from Poland.

The co-chair of the Alternative for Germany party, Frauke Petry, argued that antagonizing Vladimir Putin hasn't cut down on violence in Ukraine or Syria.

"NATO sort of surrounding Russia is not going to help," she told NPR. "It's going to deepen the conflict. But I'm hopeful that Trump and Putin are going to end the situation."

Polish Foreign Minister Witold Waszczykowski, on the other hand, has said he hopes any effort to reconcile with Russia "does not happen at our expense."

For now, military officials say the Fort Carson brigade will fan out across Poland and send some of its soldiers to the Baltic States, Romania, Bulgaria and Hungary to train with local troops there.