Accessibility links
Obama Adviser Susan Rice Cites Syrian War As Biggest Disappointment : Parallels Rice has dealt with many crises as President Obama's national security adviser and his United Nations ambassador. As she prepares to depart, she tells NPR that Syria stands out as the most difficult. 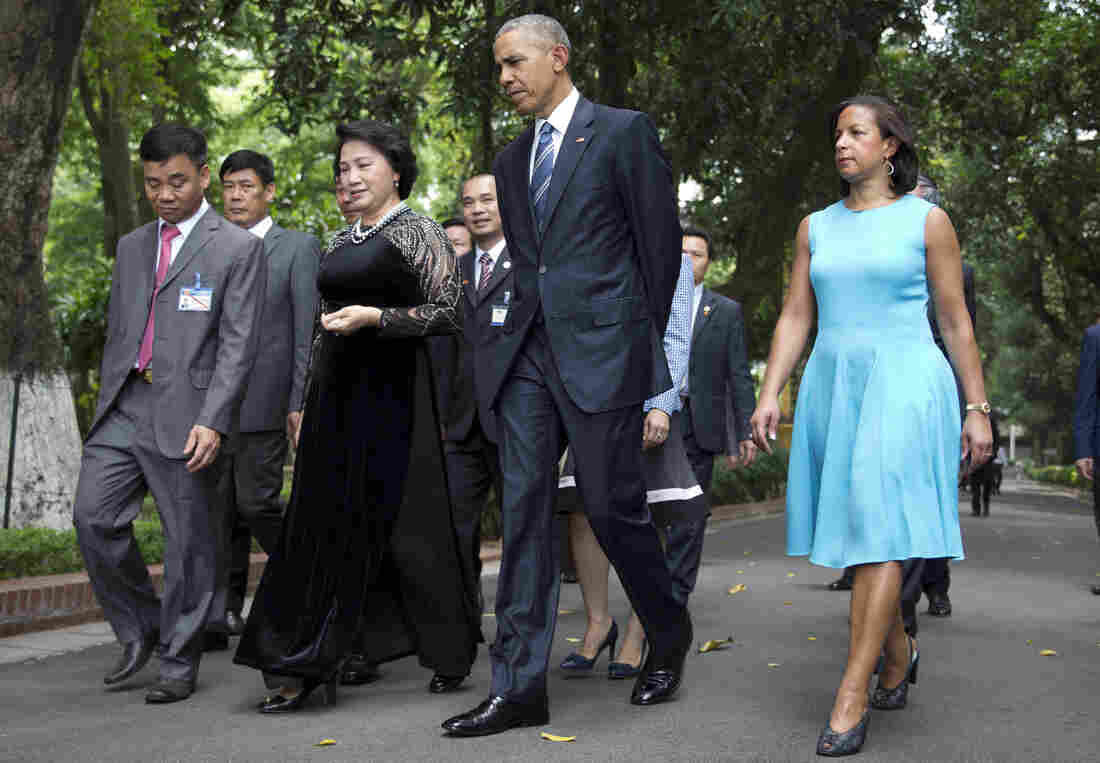 President Obama and his national security adviser, Susan Rice, walk with the chairwoman of Vietnam's National Assembly Nguyen Thi Kim Ngan, third from right, during a visit to the capital Hanoi in May 2016. Carolyn Kaster/AP hide caption 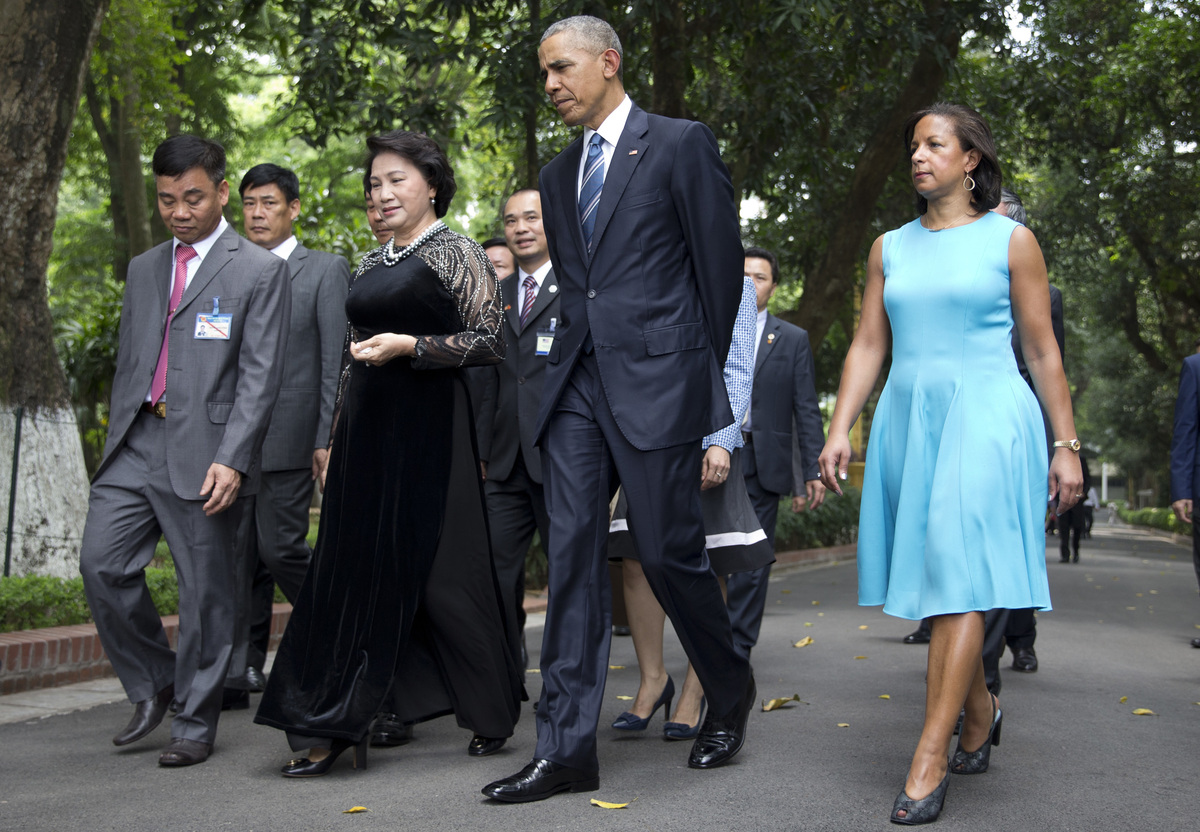 President Obama and his national security adviser, Susan Rice, walk with the chairwoman of Vietnam's National Assembly Nguyen Thi Kim Ngan, third from right, during a visit to the capital Hanoi in May 2016.

As President Obama's national security adviser, Susan Rice has grappled with with multiple crises — wars in Iraq and Afghanistan, the rise of the Islamic State, and cyber attacks blamed on China and Russia.

Rice, who served as Obama's United Nations ambassador during his first term, says there have been many successes over the past eight years. But she says her biggest disappointment has been the failure of the international community to stop Syria's brutal civil war.

"I think all of us have profound regrets about Syria, because of the extraordinary human toll of the conflict, and the fact that the war has had consequences for Syria's neighbors that are quite profound," she said.

As she prepares to leave office, Rice spoke with NPR Morning Edition host Rachel Martin in the West Wing of the White House.

Obama articulated this red line that Syrian President Bashar Assad could not cross, and then he used chemical weapons and the U.S. did not respond.

But the fundamental problem of Syria persists, and that is that there's an enormous human suffering. The conflict still rages and the United States, the international community, the U.N., Russia everybody else has not managed to find a negotiated solution.

The Obama administration recently imposed sanctions against Russia for the cyber attack on our election. But the administration knew about the hack long before Nov 8. Why the delay?

I think this is sort of a misunderstanding. We did what was the most important thing to do — back in October, on Oct. 7th, which was to inform the American people that indeed from the high-confidence judgment of our intelligence community and 17 intelligence agencies, that the Russian government at the highest levels was involved in cyber activity designed to influence the outcome of our election.

So we wanted to the maximum extent possible inform the American people, but not to rush to react until the election had ended and we had plenty of time as we knew we would, depending on what evolved between Oct. 7th and the election itself, to calibrate what we thought was the appropriate response.

I want to ask you about your successor, retired Gen. Michael Flynn.

I'm not going to get into commenting on the views or the comments of my successor. My responsibility is to execute the most responsible, comprehensive, effective transition that we possibly can. That is the direction that President Obama has given and that's what we're doing. We've met for hours to try to share with our successors what we know about the challenges and the opportunities they've faced. We have prepared hundreds of briefing papers for General Flynn and his incoming team.

Those conversations have been candid and constructive. I am not going to characterize what the next administration might do. I will ensure that we continue, up until noon on the 20th of January, to do all we possibly can, which is our sacred duty to the American people, to enable them to pick up the reins and to the greatest extent possible be ready to defend and secure this country on day one.

Have you had conversations with Flynn about climate change?

We've touched a bit on that but not in great depth. I think the incoming administration has said a number of different things on this topic. And I think we need to see where they land. It is manifestly in the interests of the United States to deal with the very real threat that climate change poses. And that's why President Obama has worked so hard to reduce our own admissions and to lead internationally in forging the Paris climate agreement.

And there are more steps that can be taken. We need to do that for our own interests, and I hope very much that as the incoming administration reviews both the domestic and international steps we've taken, that they'll realize as well that it's in our interest to continue with the Paris agreement and to deal with climate change as the real threat it actually is.