Accessibility links
Trump And China: Intentionally Provocative Or Unprepared? : Parallels Trump's campaign comments toward China were extremely strong, and we're likely to learn soon how much was rhetoric and how much will become actual policy. 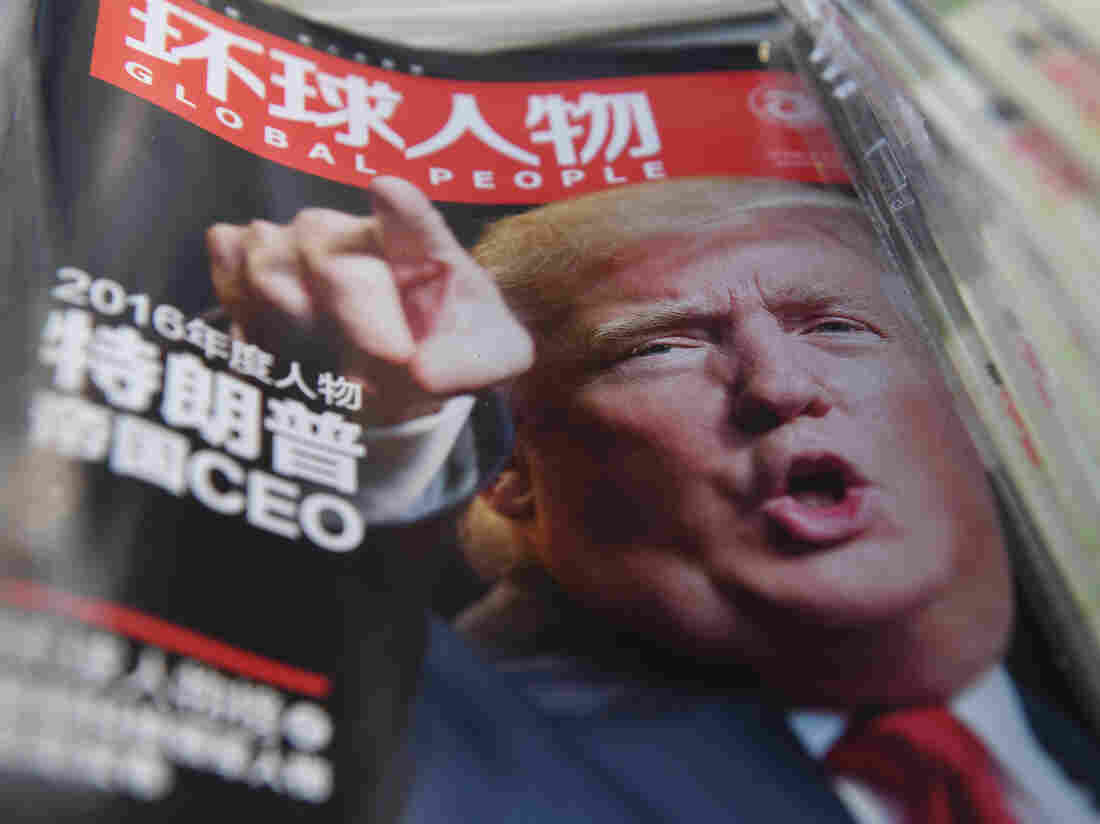 A Chinese magazine naming President-elect Donald Trump as Person of the Year is seen at a Beijing newsstand in December. On the campaign trail, Trump repeatedly vowed to get tough on China. Greg Baker/AFP/Getty Images hide caption 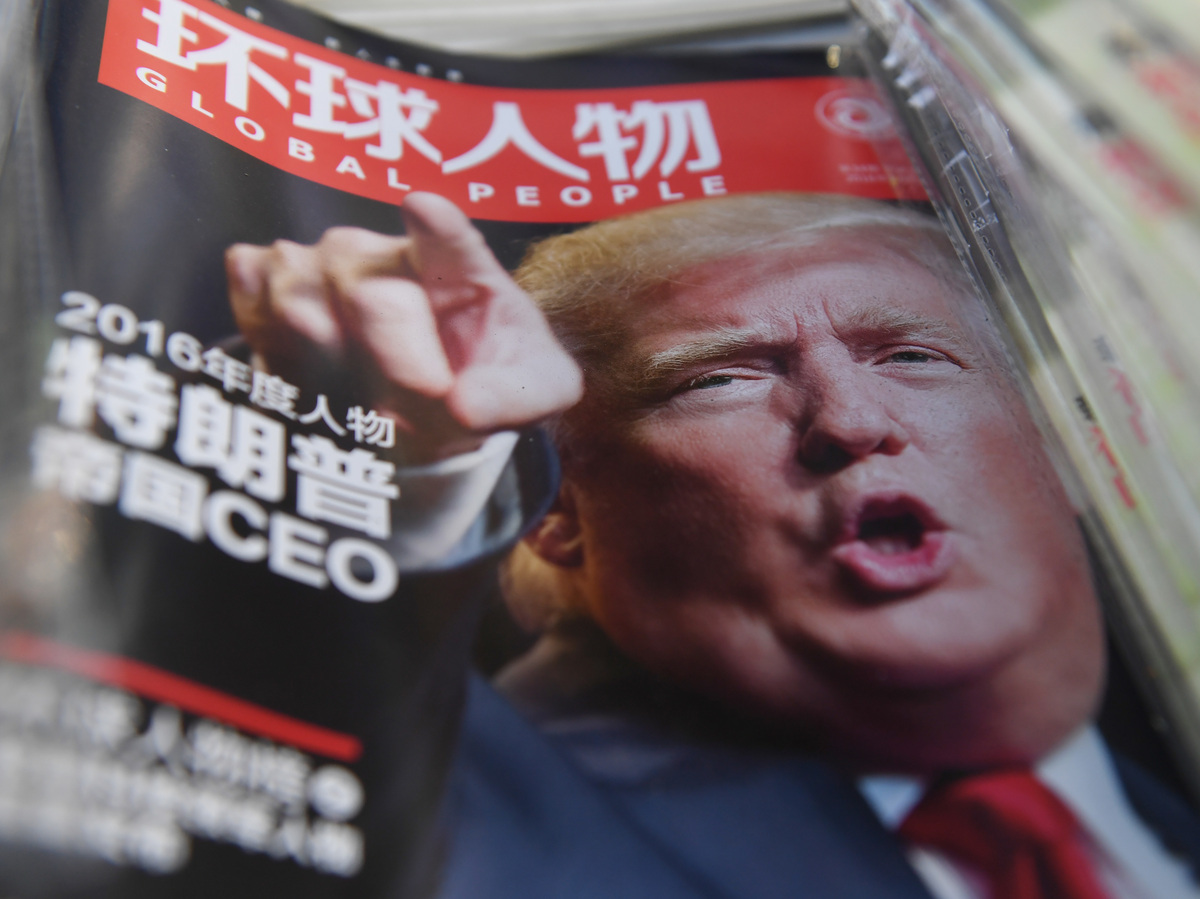 A Chinese magazine naming President-elect Donald Trump as Person of the Year is seen at a Beijing newsstand in December. On the campaign trail, Trump repeatedly vowed to get tough on China.

In a presidential campaign marked by harsh rhetoric, Donald Trump directed some of his strongest words toward China. He called the Chinese government a currency manipulator, threatened to impose tariffs on goods imported from one of America's leading trade partners and repeatedly vowed to get tough on China.

Now, as president-elect, Trump is sounding the same notes. He caused a veritable earthquake in U.S.-China relations just by taking a call from Taiwan's President Tsai Ing-wen. This challenged the bedrock of U.S. relations, the "One China" policy, under which the U.S. officially recognizes only the government in Beijing, though it also conducts business with Taipei.

And at his confirmation hearing last week, Trump's choice for secretary of state, Rex Tillerson, unleashed another salvo. Though it was just one line in a nine-hour hearing, he suggested a Trump administration would be willing to wage a showdown over China's recent island building in the South China Sea.

"We're going to have to send China a clear signal that first, the island building stops," Tillerson told the Senate Foreign Relations Committee. "And second, your access to those islands is also not going to be allowed." 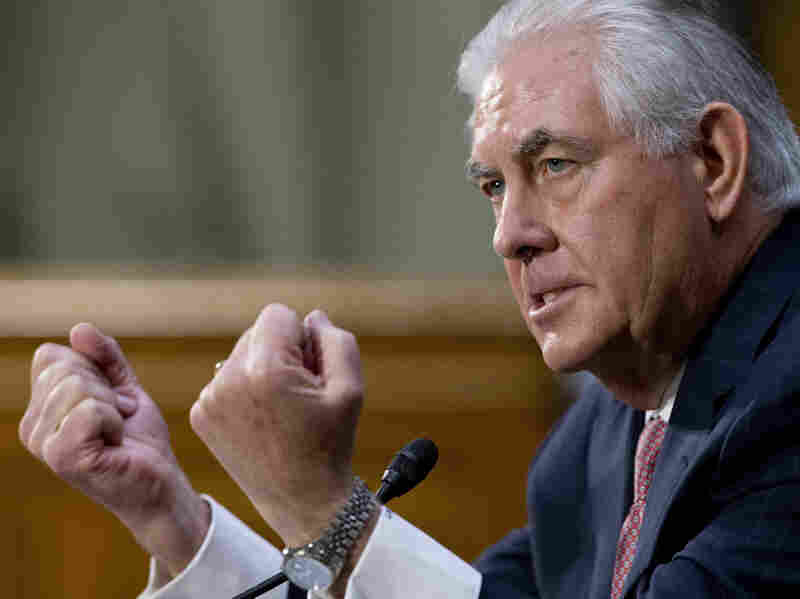 Secretary of State-designate Rex Tillerson suggested at his confirmation hearing that a Trump administration would be willing to wage a showdown over China's recent island building in the South China Sea. Steve Helber/AP hide caption 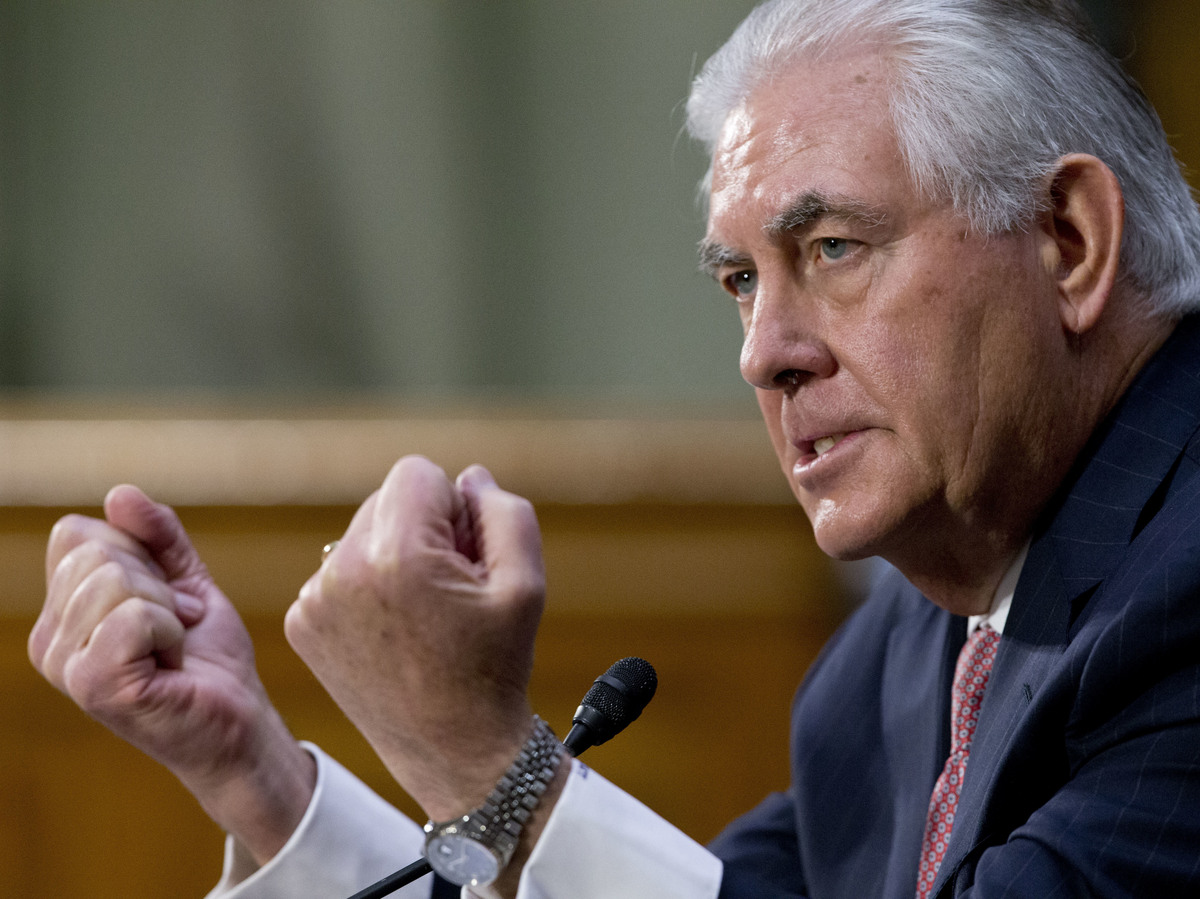 Secretary of State-designate Rex Tillerson suggested at his confirmation hearing that a Trump administration would be willing to wage a showdown over China's recent island building in the South China Sea.

Since Trump is not yet in office, and Tillerson hasn't yet been confirmed, it remains unclear whether Tillerson's statement was a genuine policy position or just get-tough rhetoric as Trump and his team prepare to assume power.

A number of Asia analysts believe Tillerson likely misspoke or overstated the positions a Trump administration will take.

"What I think he meant was that we will not let the Chinese use these new airbases on these reclaimed islands to establish dominance" in the South China Sea, says Michael Green, senior vice president for Asia at the Center for Strategic and International Studies.

Green, a former National Security Council senior director for Asia, says the Trump administration could increase the U.S. Navy's presence in the South China Sea and the frequency of patrols — strategies the Obama administration pursued, but only to a limited degree.

"My guess is that [Tillerson] was referring to options such as that — but not stating that the U.S. would blockade or interdict Chinese ships approaching those islands," says Green.

Green says the lack of clarity may be due to the lack of seasoned policy makers in the Trump transition team and the limited input from the State Department.

"I think the process has been less conducive to a careful and thorough consideration of exact wording than in the past," he says.

The Chinese media was less charitable in its assessment. The China Daily called Tillerson's remarks "a mish-mash of naivety, shortsightedness, worn-out prejudices, and unrealistic political fantasies."

So was David Shambaugh, director of the China Policy Program at George Washington University's Elliott School of International Affairs.

"This is insane and totally unenforceable, not to mention very ill-informed, ill-considered, probably not logistically feasible, and highly provocative and war-risking," he says of Tillerson's comments.

Taken at face value, the remarks call for a Cuban Missile Crisis-like blockade that would prevent the Chinese from accessing the islands they claim in the South China Sea.

Doing that would be no easy task for the U.S. Navy.

China's Navy has been rapidly modernizing in recent years and while it is "not going to be able to defeat the U.S. necessarily, they will certainly be able to punish U.S. forces in the region in a way they couldn't before," says Avery Goldstein, director of Center for the Study of Contemporary China at the University of Pennsylvania.

The danger is that a small incident in the South China Sea could quickly escalate into a major conflict.

There is another way to look at Trump's approach so far.

Almost every recent U.S. president has said on the campaign trail that he would take a tougher stance with China. That list includes Ronald Reagan, Bill Clinton and George W. Bush.

"This approach is not unprecedented," says CSIS's Green. "Typically, what happens in every case is that within a few months or a year or two, the policy calibrates and they go back to the norm."

Goldstein, of the University of Pennsylvania, says Trump might be using tactics he learned in the business world, where you often stake out your toughest positions in the beginning.

"Perhaps this is just an attempt to gain bargaining leverage so that at some point, you make a deal that is better than the one you would've gotten if you'd been flexible at the beginning," he says.

China has come a long way in recent years and is increasingly assertive in the international arena. President Xi Jinping is no one's idea of a pushover.

"The devil," says Goldstein, "is in the details. All we have so far are comments and tweets. Until they take office and formulate and implement policy, we can't be sure."