Accessibility links
After 8 Years Of Unbroken War, Obama Hands Over Conflicts To Trump : Parallels President Obama is the first president to serve eight years with the U.S. at war nonstop, from beginning to end. Donald Trump now inherits ongoing conflicts in Syria, Iraq and Afghanistan. 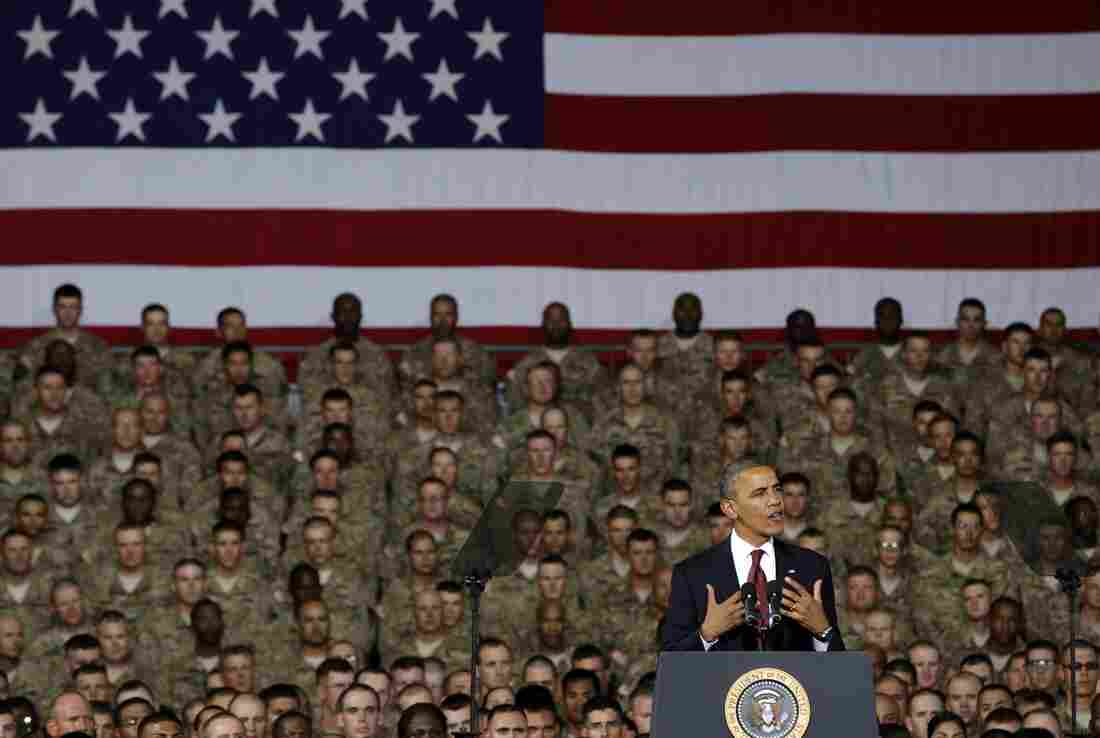 President Obama speaks to U.S. troops at Fort Bliss in El Paso, Texas, in 2012. Obama removed the large U.S. ground combat forces in Iraq and Afghanistan, as promised. But as the leaves office, the U.S. is still waging war in those two countries, as well as Syria. Tony Gutierrez/AP hide caption 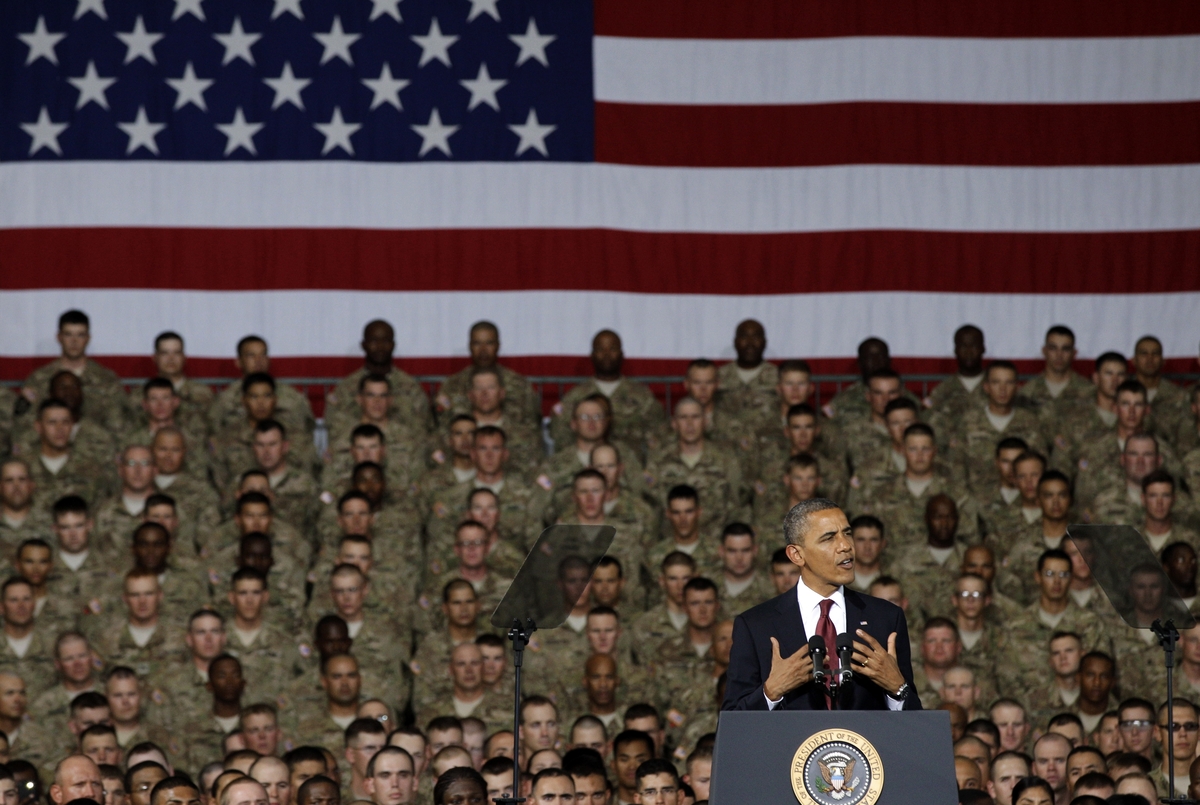 President Obama speaks to U.S. troops at Fort Bliss in El Paso, Texas, in 2012. Obama removed the large U.S. ground combat forces in Iraq and Afghanistan, as promised. But as the leaves office, the U.S. is still waging war in those two countries, as well as Syria.

Among the many things President Obama will be handing off to his successor this week: stubborn wars in three separate countries.

Obama came to office eight years ago vowing to end U.S. military interventions in Iraq and Afghanistan. Yet President-elect Trump stands to inherit the nation's longest war ever in Afghanistan, as well as renewed fighting in Iraq that has spread to Syria.

The outgoing president was reminded of the persistence of those wars at the pomp-filled farewell ceremony the Pentagon put on for him him earlier this month at a nearby military base.

"Mr. President, we've been at war throughout your tenure," said Gen. Joesph Dunford, chosen by Obama in 2015 to be chairman of the Joint Chiefs of Staff. "That's a period longer than any other American president."

That's right: Obama is the first president to serve eight years and preside over American wars during every single day of his tenure. That's not what Obama wanted or expected.

But he reminded the troops seeing him off that thanks to a new approach he's taken to those wars, the number of American forces involved in them has dropped sharply.

"Not by letting our forces get dragged into sectarian conflicts and civil wars, but with smart, sustainable, principled partnerships," Obama said of the strategy he's shifted to of training, advising and assisting local forces to do the ground fighting. "That's how we brought most of our troops home — from nearly 180,000 troops in Iraq and Afghanistan down to 15,000 today."

Of those remaining in the field, 8,400 U.S. forces are in Afghanistan. That's still more than the small residual force Obama had aimed to leave behind.

Some of those American forces in Afghanistan are fighting 13 different groups that the U.S. considers terrorists. Others are training and advising Afghan security forces to fight the Taliban, which Washington does not formally consider a terrorist organization. 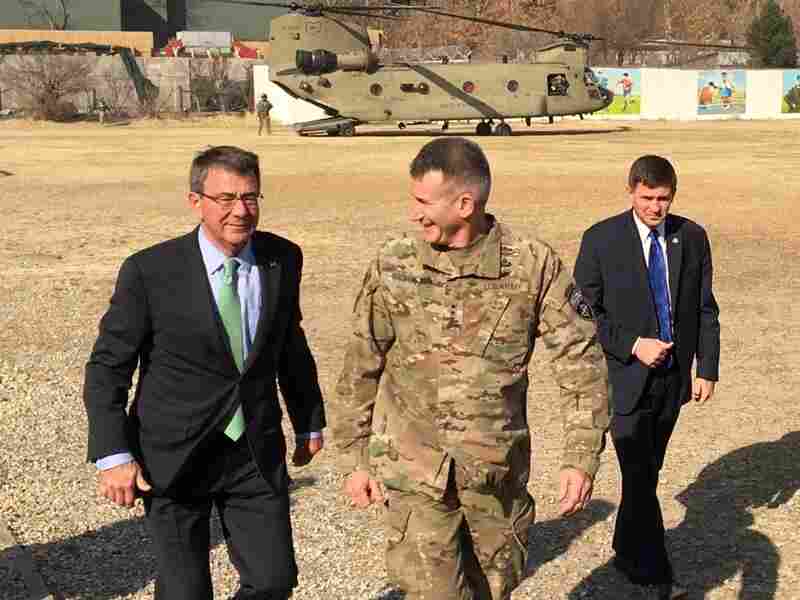 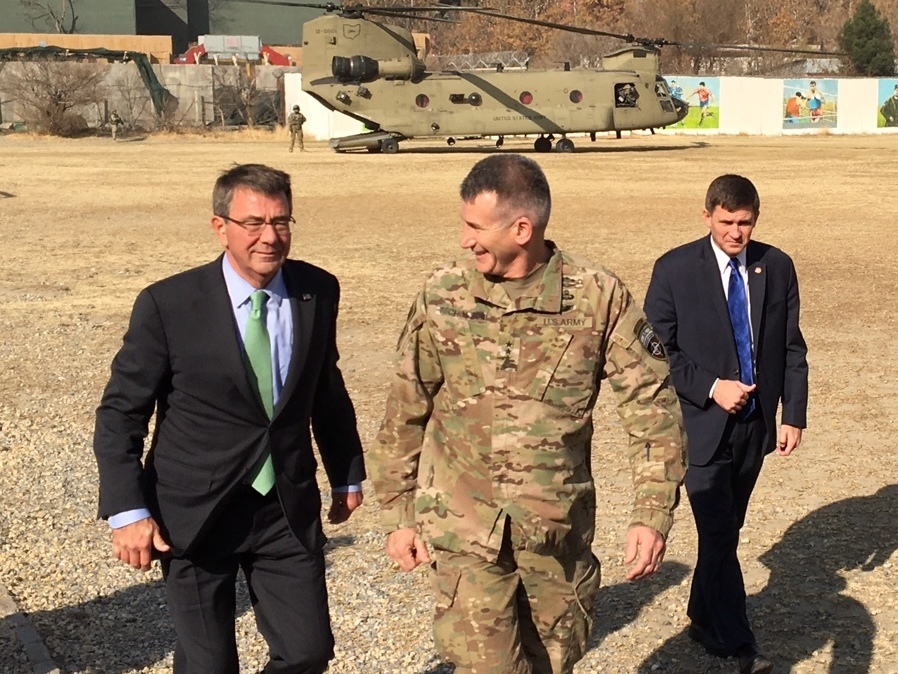 "When you look at the performance of the Afghan forces this year, it was a tough year," said Gen. John Nicholson, the top U.S. commander in Afghanistan, at a December news conference held at Bagram Airfield. "They were tested, but they prevailed."

Others take a dimmer view of the effort to shift the lead in fighting the Taliban to Afghanistan's security forces.

"It's basically playing whack-a-mole," says John Sopko, who since 2012 has been the U.S. Special Inspector General for Afghanistan Reconstruction.

While presenting SIGAR's latest report at a military think tank in Washington earlier this month, Sopko described the Afghan National Security Forces as hobbled by corruption and poor leadership.

"We're defining success by the absence of failure," Sopko said of those forces' ongoing attempts to retake territory lost to the Taliban. "At a minimum, they're playing defense, and are not taking the fight to the Taliban."

What's more, a war that began with a U.S. invasion 15 years ago in October 2001 appears to have no end in sight.

"The situation in Afghanistan, in the rosiest possible reasonable analysis, is a stalemate," said Stephen Biddle, a military analyst at the Council on Foreign Relations and George Washington University. The war, he added "can only be sustained if the U.S. Congress keeps writing multibillion-dollar-a-year checks to keep the Afghan National Security Forces in the field." 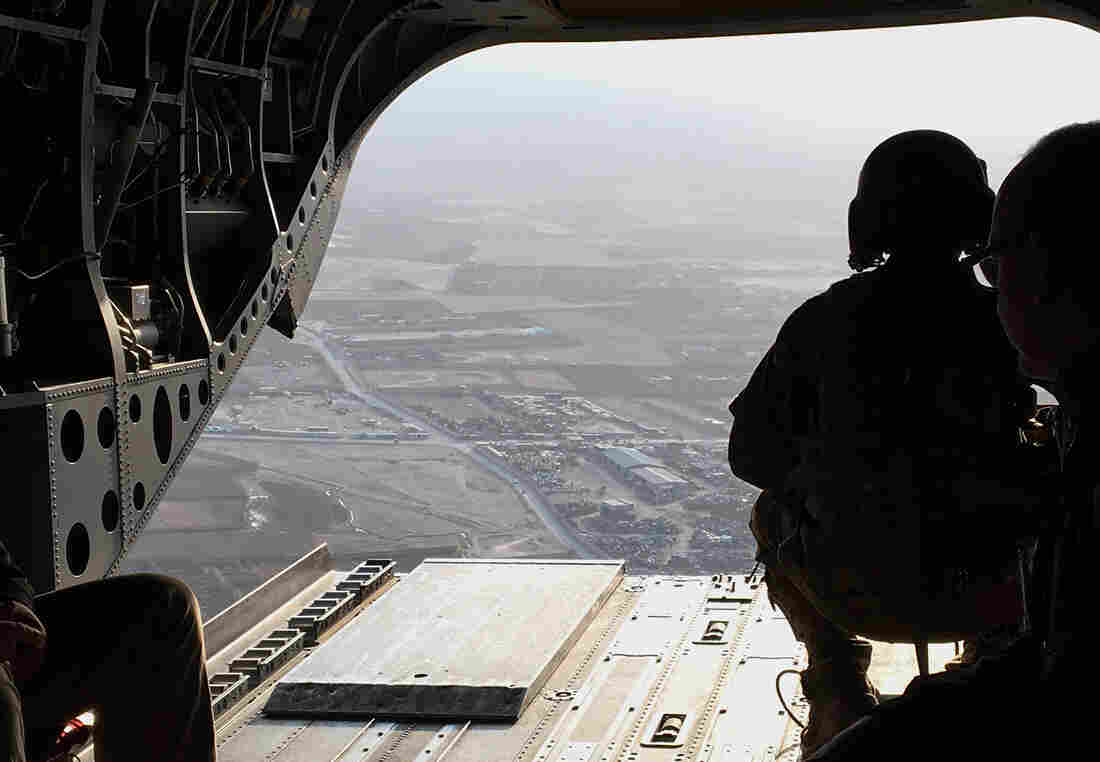 One of the 8,400 remaining U.S. troops in Afghanistan guards the bay of a CH-47 Chinook transport helicopter as it flies near Kabul. David Welna/NPR hide caption 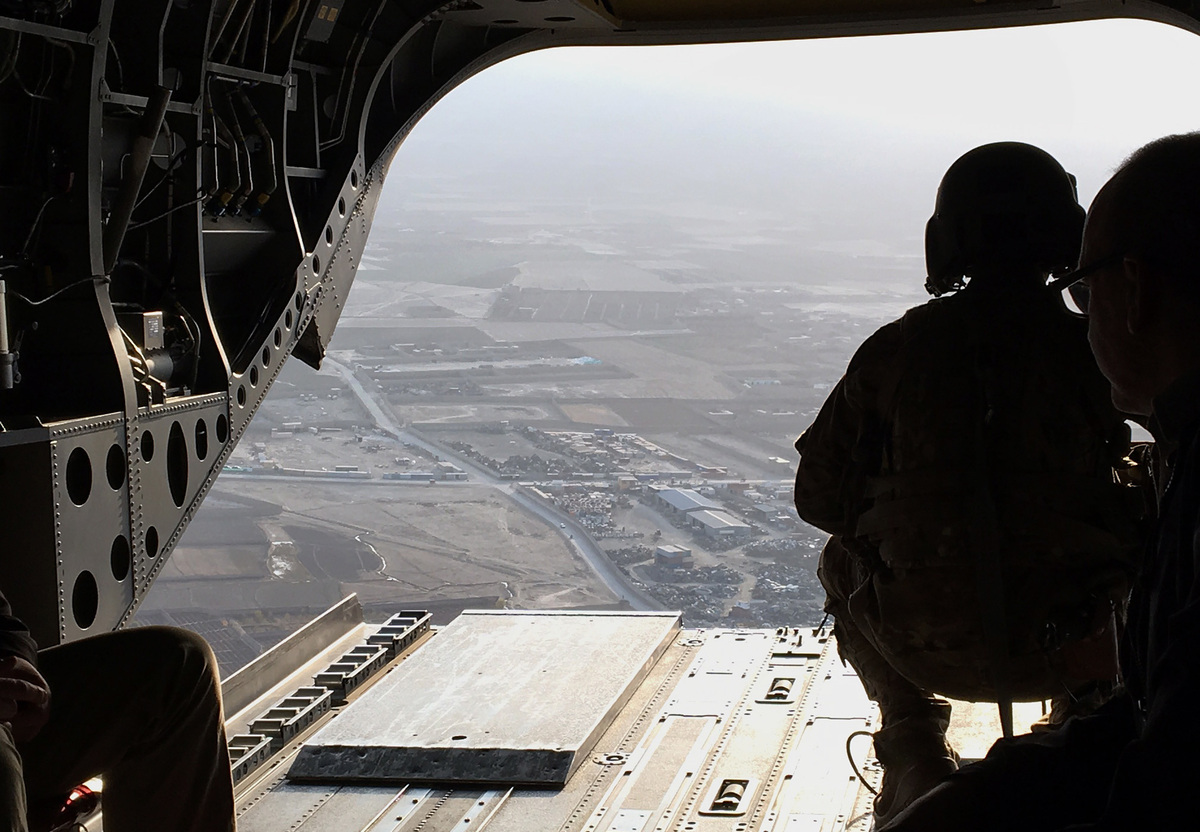 One of the 8,400 remaining U.S. troops in Afghanistan guards the bay of a CH-47 Chinook transport helicopter as it flies near Kabul.

The rise of ISIS

And then there's the war Obama has waged since 2014 against the Islamic State, both in Iraq and Syria.

"These terrorists have lost about half of their territory," Obama told troops at his Pentagon farewell ceremony. "They are losing their leaders, towns and cities are being liberated, and I have no doubt this barbaric terrorist group will be destroyed — because of you."

"Any army on the planet, to include the United States Army, would be challenged by this fight," said Gen. Stephen Townsend. "The Iraqi army has come back from near defeat two years ago, and now they're attacking this major city."

In neighboring, war-ravaged Syria, at least 600 U.S. Special Forces are now on the ground, mainly to train and assist local rebel forces. The ultimate aim is to oust Islamic State fighters from Raqqa, the capital of the group's self-declared caliphate.

Some experts doubt such an approach — arming and training an array of Syrians from often competing factions — will work.

"We're losing, they're winning," says the Brooking Institution's Michael O'Hanlon. "They maybe don't say it in quite those terms, because they like the fact that we're still pulling the wool collectively over our own eyes, but the idea of defeating ISIS, replacing (Syrian President Bashar) Assad, and doing all this with a minimal American military investment, does not add up to a logical policy."

As for the incoming president, it's not clear how he'll fight these inherited wars. Trump barely mentioned Afghanistan during his campaign. It's also unclear how he'd handle the anti-Islamic State campaign in Iraq and Syria.

"Where is the king of Jordan, where's the emirs of some of these other countries?," Flynn asked rhetorically about nations in the region he felt should be doing more to fight the Islamic State. "They need to actually stand up and, internationally and publicly, condemn this violent form of this ideology that is operating inside of their bloodstream right now — and I don't see it. And that's where the president of the United States needs to place a different set of demands on these guys."

When Flynn uttered those words, Trump was just the Republican nominee for the White House. The now-president-elect's recommended strategy for fighting the Islamic State had been characteristically blunt.

"I would just bomb those suckers," Trump told a campaign rally in Iowa shortly before that state's caucuses a year ago.

As president and commander in chief, Trump soon will have the power to do so.