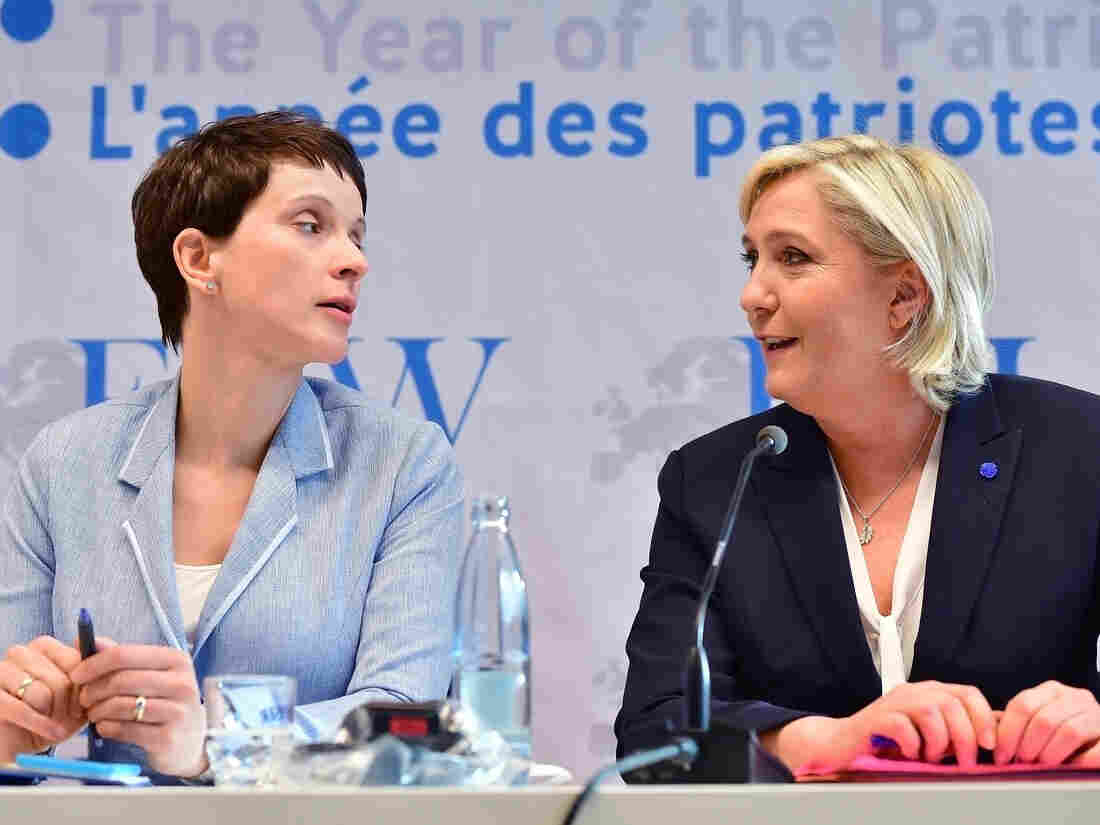 Frauke Petry, co-chair of Germany's Alternative for Germany party, and Marine Le Pen, who heads France's far-right National Front attended a conference of European right-wing parties in Koblenz, Germany. France, the Netherlands and Germany all face national elections this year and in each case right-wing populists are in a strong position. Thomas Lohnes/Getty Images hide caption 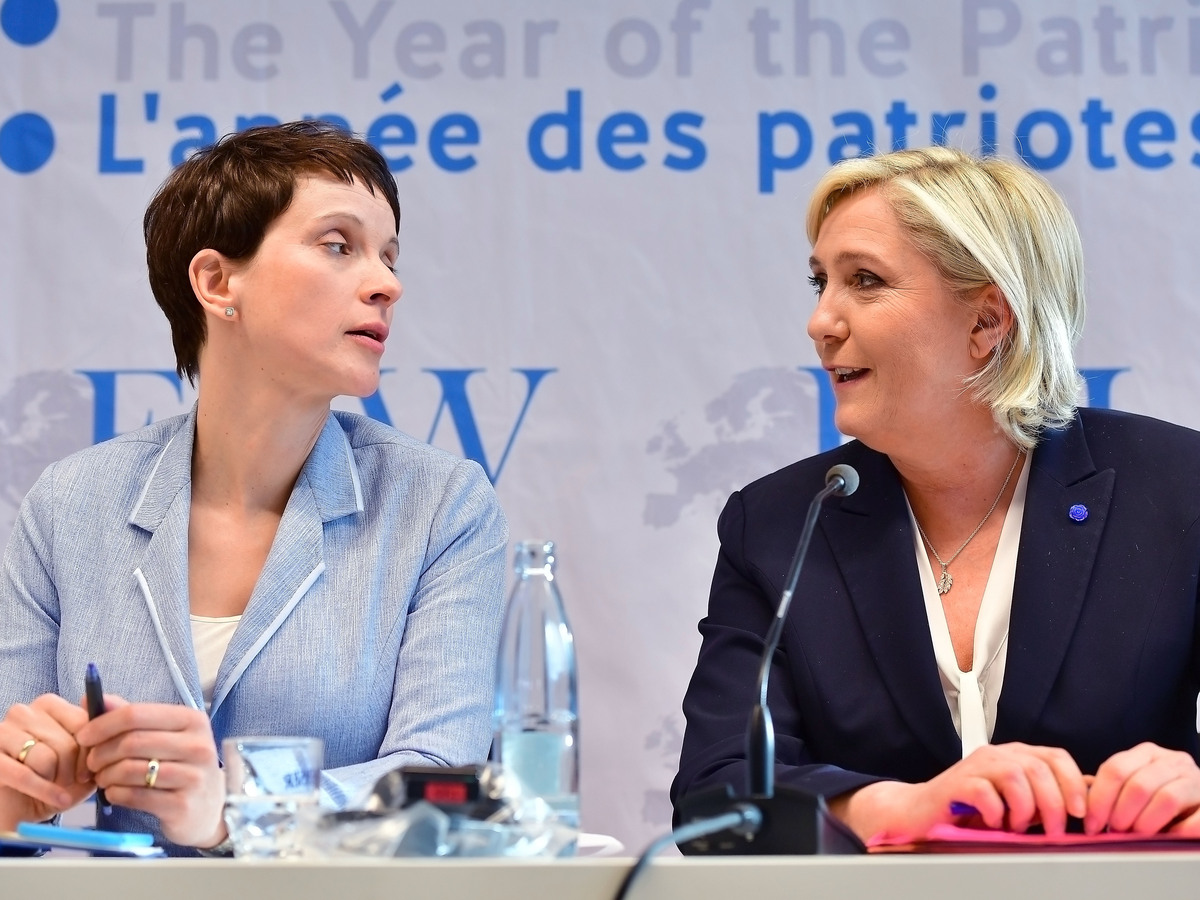 Frauke Petry, co-chair of Germany's Alternative for Germany party, and Marine Le Pen, who heads France's far-right National Front attended a conference of European right-wing parties in Koblenz, Germany. France, the Netherlands and Germany all face national elections this year and in each case right-wing populists are in a strong position.

Emboldened by Donald Trump's win and inauguration, several of Europe's top populist leaders gathered in Germany this weekend to strategize on how they might help each other in their upcoming national elections.

She lauded the British decision last year to leave the European Union, dubbed Brexit, which she said would cause "all of the dominoes of Europe to topple." She also spoke glowingly about Trump.

"2016 was the year the Anglo-Saxon world woke up," she said to wild applause. "I am certain 2017 will be the year when the people of continental Europe wake up."

Right-wing Dutch politician Geert Wilders said he's optimistic that his and Le Pen's factions, as well as the Alternative for Germany (AfD) party, will do well in elections this year.

Wilders heads the Freedom Party, which according to recent polls is popular with about a quarter of Dutch voters and leading all other political factions in the Netherlands. But it's unlikely the anti-Islam MP would head any Dutch coalition government because no parties are willing to work with him.

Wilders added if he and his fellow populists don't win, "the genie won't go back into the bottle."

"We will be here; not only next year but many years," he said.

There is some basis for his optimism, given the growing popularity of populist politicians among middle-class voters across Europe. They've grown increasingly frustrated with the inability of the European Union leadership to boost wages, services and jobs; to solve recurring problems with the Euro, and for failing to develop a workable refugee policy despite 1.5 million or more asylum seekers arriving there over the past few years.

More recently, the 28 bloc leaders have earned more animosity from constituents over their inability to stop Muslim extremists from carrying out terror attacks.

It's that dissatisfaction and fear that populist parties are capitalizing on, not unlike Trump did during his presidential campaign.

"Donald Trump has found a way out from a dead end," explained Frauke Petry, the 41-year-old co-chair of AfD. Trump's approach is something she and others at Saturday's conference said they hope to emulate, although Petry told NPR in a recent interview she doesn't believe her party will get enough votes in next September's elections for her to think about becoming the German chancellor.

To boost their chances, European populists set aside their differences over how their countries and economies should be run, said Petry's husband, Marcus Pretzell, who is a European Parliament member and heads AfD's North Rhine Westphalia chapter. "Realpolitik needs partners ... if we want to turn the EU on its head."

"What we all believe is the common people and not the political elite should be in charge again," Geert Wilders added. "We want less European Union. We want more nation-state. We want to be in charge of our own law-making, our own money, our own border control. That is what we want, that is what we demand."

But thousands of demonstrators who gathered outside the convention hall yesterday to protest the meeting dismissed the populists as Nazis and racists.

"Germany is colorful, not brown," they chanted, or diverse, rather than the shirt color associated with the Nazis. They later sang "Ode to Joy," the Friedrich Schiller poem set to Ludwig Van Beethoven's Ninth Symphony, the music of which is the anthem of the European Union.

German Vice-Chancellor Sigmar Gabriel came to see one of the protests. "There was a sign I particularly liked: 'Whoever sleeps in a democracy, wakes up in a dictatorship,'" he said. "It's great that people here are resisting the notion that all of Europe is moving to the right."

In a bid to appeal to more Germans, the AfD leaders recently have tried to distance themselves from racist and controversial comments made some of its senior members, like last week's condemnation of the Holocaust Memorial by Bjoern Hoecke, an AfD leader in Thuringia.

He told supporters in Dresden on Jan. 17: "We Germans are the only people in the world who would plant a memorial of disgrace in the heart of their capital."