Accessibility links
For 'Dutch Donald Trump,' A Surge In Popularity Before March Elections : Parallels Geert Wilders wants his country to return to its white, Christian roots, shut down mosques and exit the EU. He's favored to win March elections, though unlikely to become prime minister. 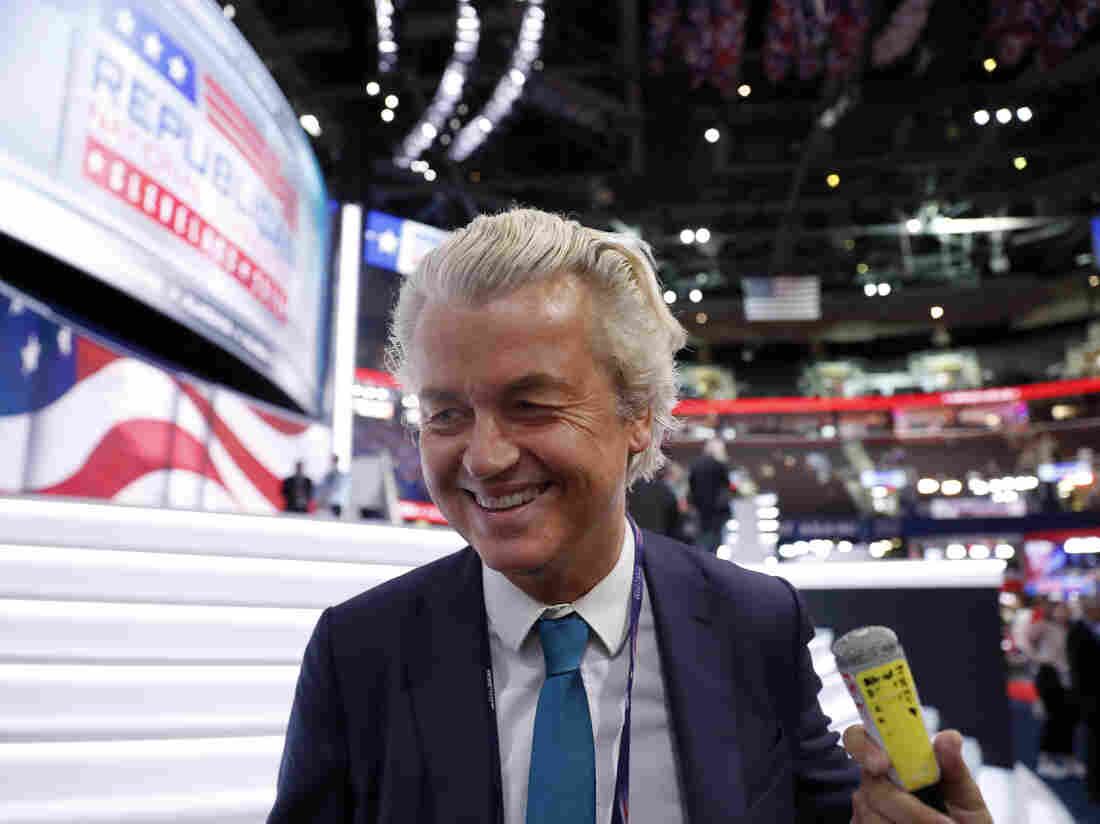 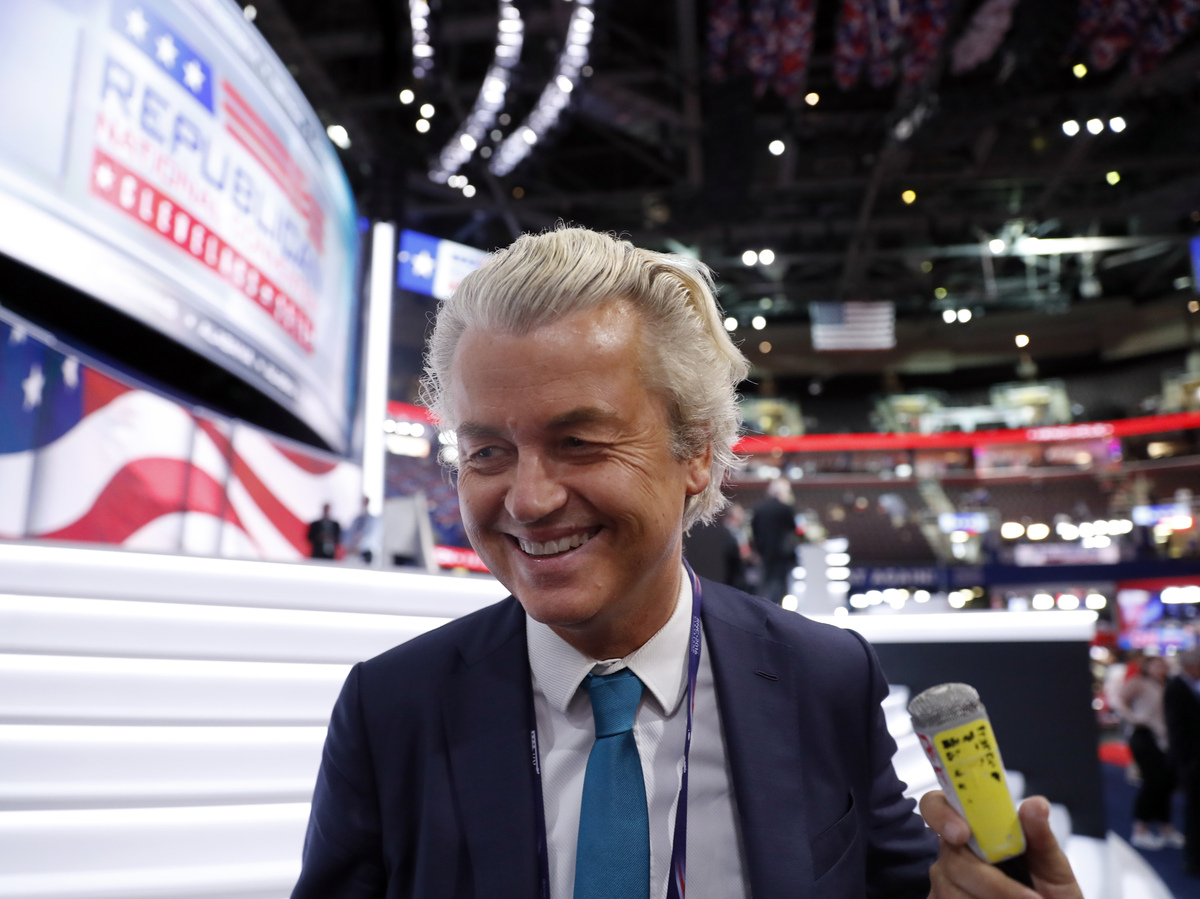 Dutch lawmaker Geert Wilders talks to reporters at the Republican National Convention in Cleveland in July. The Dutch press has dubbed Wilders "the Dutch Donald Trump" because of his rhetoric against immigrants.

At a political rally in March 2014, Geert Wilders, a member of the Dutch parliament and head of the far-right Freedom Party, asked supporters:

"In the Netherlands, do you want more or fewer Moroccans?"

"Then I'll arrange it," Wilders replied with a smirk. The crowd cheered.

That scene, carried live on Dutch TV and replayed over and over again, offended many Dutch citizens. Within months, more than 5,000 of them joined a class action lawsuit suing Wilders for discrimination.

"It really hit me emotionally," says one of the plaintiffs, Mostafa Hilali, a lieutenant colonel in the Dutch army who happens to be of Moroccan descent. "It's pretty brutal to say, and pretty brutal to hear."

In December, Hilali and his co-plaintiffs won. Wilders was convicted of inciting discrimination against Moroccans. But he got no punishment.

Instead, he has surged in the polls. Wilders now looks likely to win the most votes in the Dutch election March 15. His rise mirrors those of other far-right or populist parties across Europe. 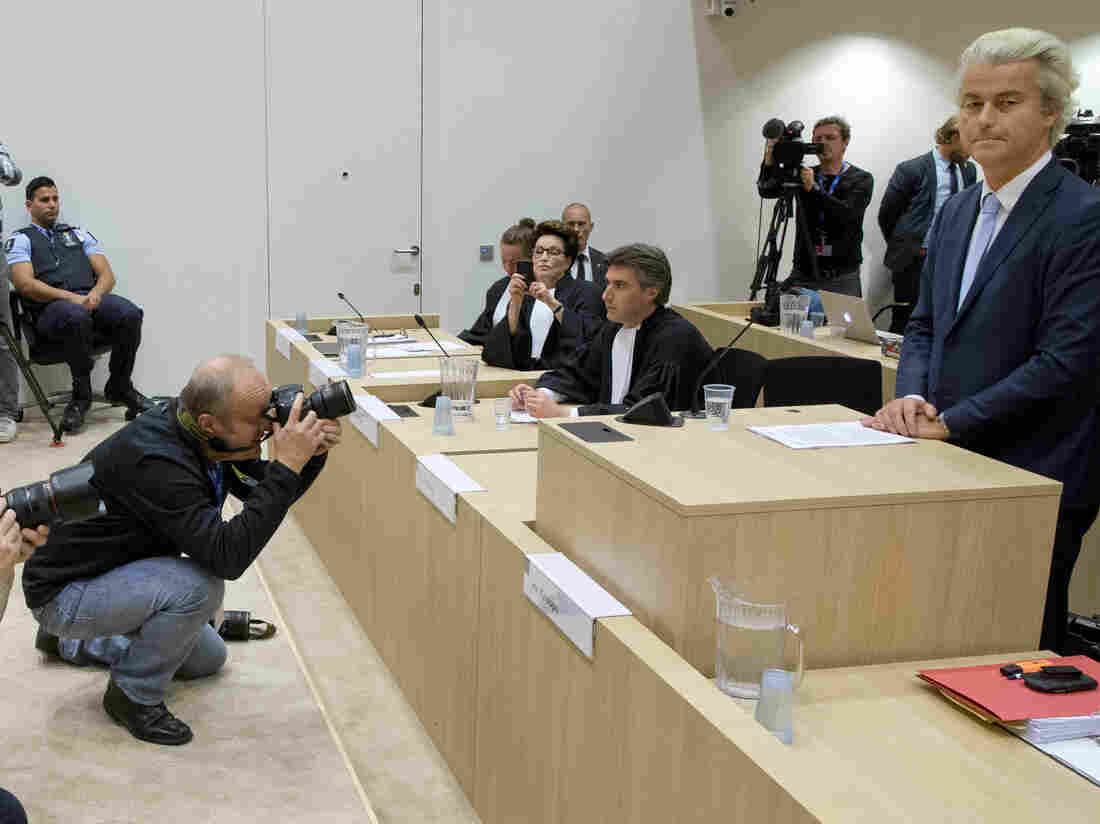 Wilders (right) prepares to address judges at a high-security court during his November hate-speech trial in Amsterdam. He lost the case but faced no legal punishment. Peter Dejong/AP hide caption 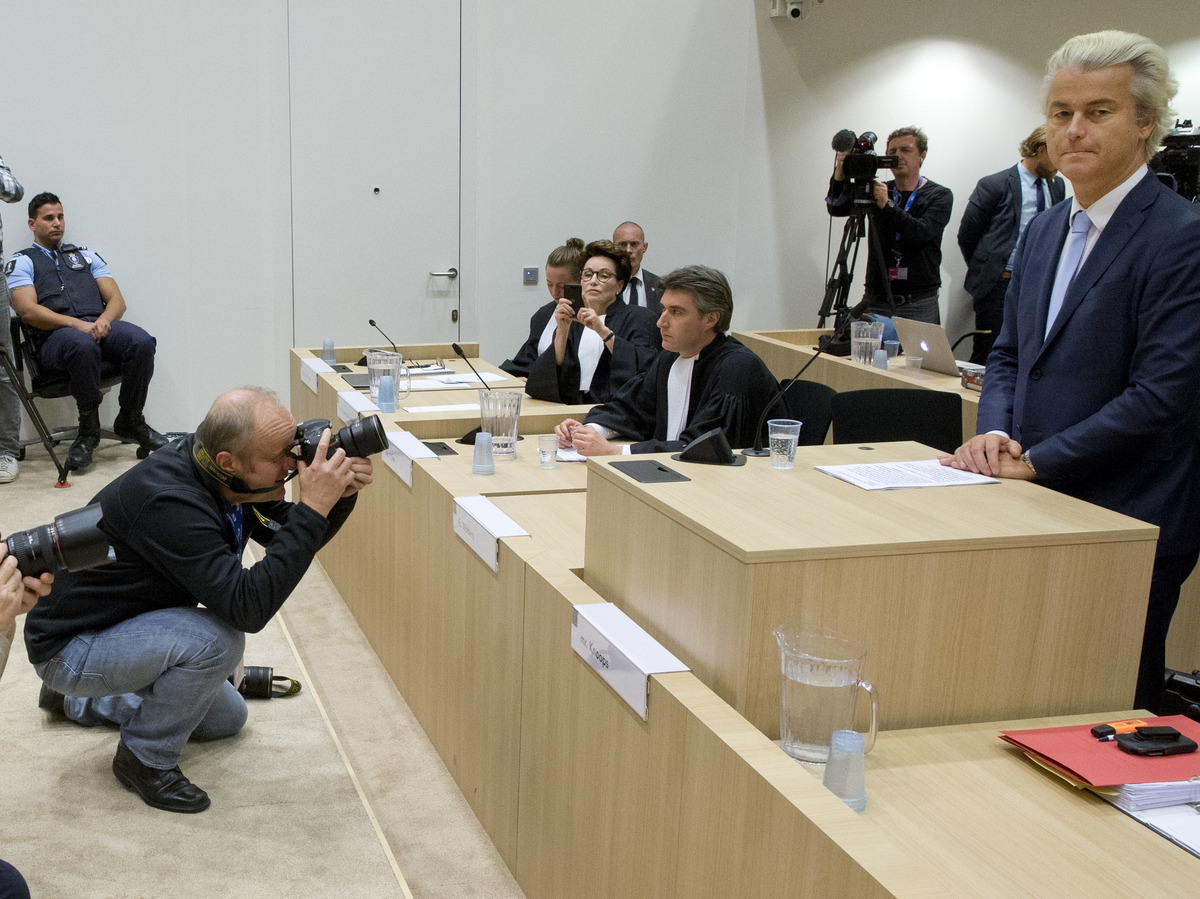 Wilders (right) prepares to address judges at a high-security court during his November hate-speech trial in Amsterdam. He lost the case but faced no legal punishment.

The Dutch press has dubbed Wilders "the Dutch Donald Trump" because of his rhetoric against immigrants. Trump had the Mexicans; Wilders has the Moroccans.

"This image we always have of ourself as a very tolerant, moderate and accepting country is skin-deep," Hilali says. "[Wilders'] rise shows there are a lot of people out there who actually have very different ideas about how the Netherlands should be."

Over tea at their home in The Hague, Hilali and his wife recount how they wanted to name their new baby after his Moroccan grandfather, but worried the boy would face a lifetime of discrimination with a Moroccan name. Hilali's native Dutch wife, Linda Van Noorde, was also a plaintiff in the Wilders discrimination lawsuit. But she understands why many other Dutch people support him.

"Because the area where my grandparents lived their whole life, it changed radically. You know, suddenly there's this huge mosque right in front of your home. So I get that some people have a problem with that," Van Noorde says. "They're not racist. They're coping with what to them is an extreme change."

In the 1950s, the Netherlands' immigrant population was virtually zero, except for a few thousand Dutch citizens from Indonesia, a former Dutch colony. But in the 1960s and 1970s, Dutch companies facing a labor shortage recruited guest workers from Turkey and Morocco.

After the Netherlands became a founding member in 1993 of the European Union, with its free movement of citizens, its immigrant population shot up to about 10 percent in just a few decades. Certain areas, like Van Noorde's grandparents' neighborhood in the port city of Rotterdam, are majority immigrant now. Most are descendants of those guest workers from Turkey and Morocco.

Wilders promises to reverse that and return the Netherlands to its white, Christian roots. But what makes him different from the far-right in other European countries is that he also favors gay rights, legalized drugs and feminism.

What appeals to many Dutch voters is that he vows to protect those liberal Dutch values from an enemy that he says is Islam.

"A lot of people from Islamic backgrounds don't care a bit about our values, our culture, our identity, our freedom — or the rights of women not to be harassed," Wilders told NPR in a rare interview in late December, in the hallway of the Dutch parliament.

It was just after an ISIS attack on a Christmas market in Berlin, and Wilders was irate. He'd just tweeted a photoshopped picture of German Chancellor Angela Merkel with blood on her hands.

"We should hold Mrs. Merkel accountable. We should hold the Dutch prime minister accountable. They are all of the same bunch — irresponsible, cowardly," Wilders said. "We have to change our societies and fight back and defend our values and our people. That's the only way we can save our liberty."

He's an isolationist. He wants to ban the Quran, shut down mosques and pull his country out of the European Union. He wants to cut all foreign aid. Much like the Arab Spring a few years ago, Wilders says a wave of populist anger is now sweeping the West — and he's proud to be one of its leaders.

"I'm a patriot. I believe there's a patriotic spring going on in the world today, in the Western world," Wilders said. "Donald Trump did the job in America, and I hope that here in Europe, we will see a patriotic spring in Holland and also in Germany, in France — in many other countries where parties like mine are getting stronger every day."

Curiously, the anti-immigrant Wilders — who dyes his flowing hair peroxide-blonde — has some immigrant blood himself. His mother's side is from Indonesia.

He fell in love with Israel as a young man, when he volunteered there — and criticizes its Arab neighbors.

His anti-Muslim stance has earned him death threats. Wilders lives in safe-houses. When NPR interviewed him, we had to squeeze our microphone between beefy bodyguards.

"His world obviously is a world of constant threat and fear, surrounded by bodyguards. It does strange things to you," says Gijs van de Westelaken, a Dutch filmmaker who knows that feeling.

Security became a concern for Westelaken after his colleague Theo van Gogh, a famous Dutch filmmaker, was murdered by a Muslim extremist on an Amsterdam street in 2004. Westelaken and van Gogh had worked on a film together. Van Gogh had also recently made a film critical of Islam.

His killer, now serving a life sentence in Dutch prison, pinned a note to van Gogh's body with a knife, threatening others who dare to offend Islam. That murder sent millions of Dutch out into the streets to rally for freedom of speech. Free-speech advocates found themselves on the same side as critics of Islam, and even anti-Muslim politicians. The sentiment reached a climax in the Netherlands more than a decade before it did in the rest of Europe, with the recent migration crisis.

Today, with that recent history in mind, many Dutch who might not agree with Wilders' politics still support his freedom of speech — and think the discrimination case against him was ridiculous.

"I think the trial against [Wilders] was completely wrong. They shouldn't have done it. If anybody has a right to free speech, it's him," Westelaken says. "On the other hand, well, he is a politician! He exaggerates — and all of Europe is trying to mobilize the populist vote."

Even if Wilders wins the most votes in the March election, rival parties are not likely to back him to be prime minister in this multiparty system. Last month, though, in a poll by a Dutch current affairs TV show, Wilders was named his country's 2016 politician of the year. It was his fourth win.