Accessibility links
CIA 'Black Sites' Order: A Real Plan Or Just Politics? : Parallels A draft presidential order that could open the door to reviving "black sites" might be as much political messaging as a true plan. 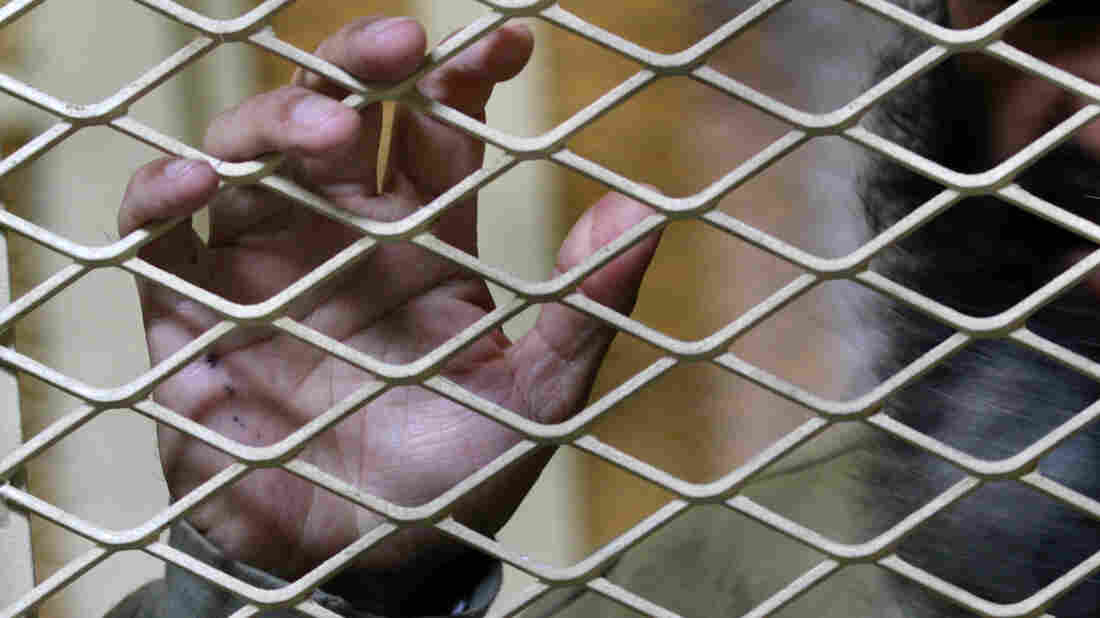 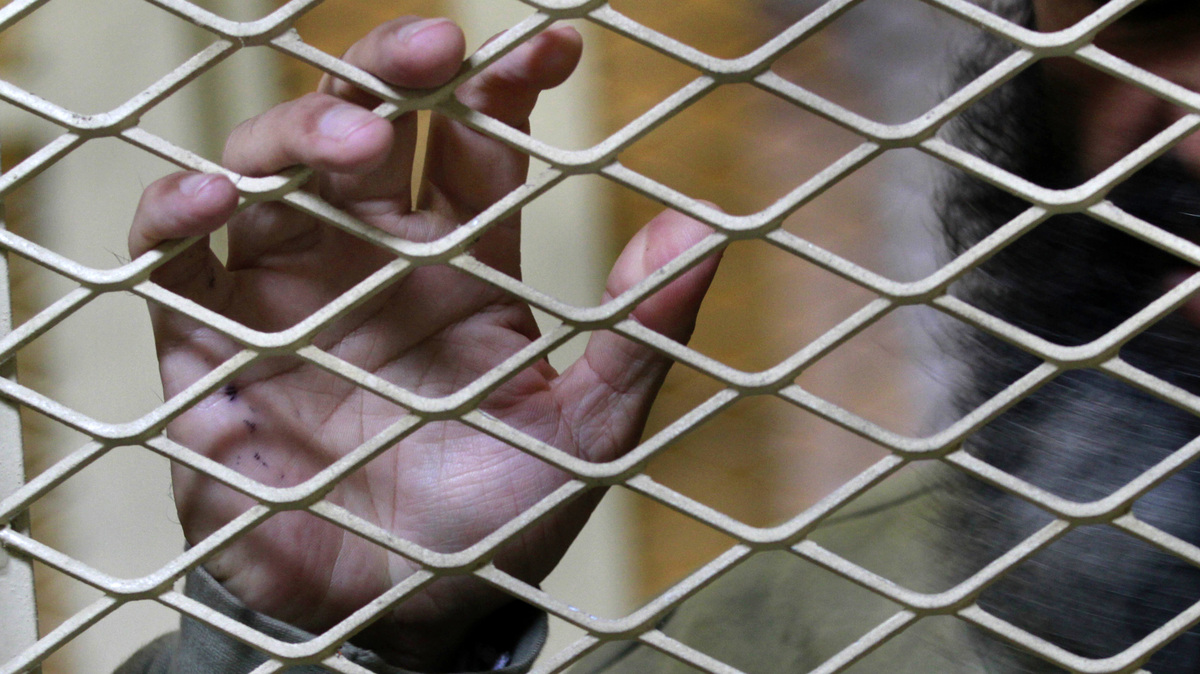 An Afghan detainee is held at the Parwan detention facility near Bagram Airfield in Afghanistan in 2011. A document circulating in Washington suggests the Trump administration might reactivate secret CIA "black sites" for terrorism detainees around the world.

Politics may be at play in the appearance of a draft presidential order that could revive the CIA's "black site" prisons, one former CIA director says.

The appearance of the document, first reported by the New York Times, drew an immediate outcry from both Democratic and Republican lawmakers, as well as CIA veterans.

The draft order calls for a review of the interrogation practices permitted under current U.S. law and whether the CIA should reopen its once-secret network of overseas prisons. But former CIA Director Michael Hayden says he thinks it is more about sending a message than laying serious plans.

"My instinct is this is a way of reflecting the tough language from the campaign, not a commitment to change anything," Hayden told NPR. "I cannot imagine a CIA director saying, 'It's going to be OK to open a future black site.' I mean, we're not doing this again."

President Donald Trump endorsed outlawed interrogation methods during the presidential campaign, telling a crowd in South Carolina: "Torture works, OK, folks? Believe me. It works, OK? And waterboarding is your minor form, but we should go much stronger than waterboarding."

Trump repeated his support for waterboarding in an interview with ABC News scheduled to air on Wednesday evening, according to previews released by the network. But he also told anchor David Muir that he would defer to Defense Secretary James Mattis and CIA Director Mike Pompeo about whether to use it.

Lawmakers who oversaw the CIA's previous interrogation and detention programs were quick to criticize the proposals.

"The president can sign whatever executive orders he likes," Arizona Republican Sen. John McCain, chairman of the Senate Armed Services Committee, said in a statement. "But the law is the law. We are not bringing back torture in the United States of America."

Sen. Dianne Feinstein, a California Democrat who oversaw the production of a 6,700-page classified report on CIA detention and interrogation programs during her tenure as chairwoman of the Senate Intelligence Committee, also offered a scathing response.

"Reconstituting this appalling program would compromise our values, our morals and our standing as a world leader — this cannot happen," she wrote. "I encourage President Trump to not sign the damaging and dangerous executive order that has been circulating. Read the [Senate] report, declassify it and let the American people see for themselves how the program failed to work — I believe they will never want to go there again."

Rebuilding the CIA's network of secret prisons would very likely meet resistance from the agency itself, where many officers feel they were hung out to dry after being asked to take on the job of detaining and interrogating terrorism suspects after the attacks of Sept. 11, 2001.

At Pompeo's Jan. 12 confirmation hearing, senators grilled him, demanding to know whether the CIA was definitively out of the torture business.

"If you were ordered by the president to restart the CIA's use of enhanced interrogation techniques that fall outside of the Army Field Manual, would you comply?" asked Feinstein.

"Absolutely not," Pompeo replied. "Moreover, I can't imagine that I would be asked that by the president-elect or then-president."

But in written answers to follow-up questions by the Senate Intelligence Committee, Pompeo steered a somewhat different course.

Pressed — again by Feinstein — on whether he would commit to refraining from any steps that would bring back waterboarding or other so-called enhanced interrogation techniques, Pompeo wrote:

In other words, Pompeo says he will confer with the CIA officers who now report to him on whether the current interrogation rules work. And if not, he's open to changing them. That review could get underway if Trump signs the draft order revealed on Wednesday.

The president argues that U.S. national security officials have their hands tied. On his visit to CIA headquarters on Jan. 21, he told the assembled intelligence officers and analysts that "we're going to do great things. ... We have not used the real abilities that we have. We've been restrained."

Supporters say the time is right for the U.S. to take another look at the restrictions Congress imposed during the tenure of President Barack Obama, which limit soldiers, intelligence officers and other interrogators to the techniques spelled out in the Army Field Manual.

"I support very much the idea that we're going to review — and that's what the executive order does," said Liz Cheney, a Wyoming Republican in the House and daughter of former Vice President Dick Cheney.

Her father was a key member of President George W. Bush's administration when it ordered the use of torture after the 2001 destruction of the World Trade Center. Terrorism suspects were jailed in secret in foreign countries — including Afghanistan, Thailand and Lithuania — and chained, beaten and subjected to other such treatments as interrogators demanded information.

"I do support enhanced interrogation," Liz Cheney told reporters in Philadelphia. "I think that it's something that clearly has helped us in the past to prevent attacks and save lives and so I was glad to see President Trump take that step."

People still caught up today in the aftermath of the Bush-era decisions, however, called that a bad idea. James Connell, an attorney for alleged Sept. 11 plotter Ammar al-Baluchi, said at the Guantanamo Bay detention center on Wednesday that one reason the trials there are taking so long is the complications caused by the use of brutal interrogations.

Defendants like Baluchi argue the government cannot use evidence it extracted from them by torture, but U.S. national security officials say such men are too dangerous to let go. So they have languished in limbo in Guantanamo for years.

"What this case has demonstrated, if it's demonstrated anything, is that torture makes criminal cases virtually impossible to prosecute," Connell said. "In fact, it's fair to say that torture and due process are mutually exclusive."