Accessibility links
For A Stark Contrast To U.S. Immigration Policy, Try Canada : Parallels Some point to Canada's immigration system as a model for U.S. reform. Canada is nearly a quarter foreign-born, yet it doesn't seem to wrestle with anti-immigrant nativism that has erupted in the U.S. 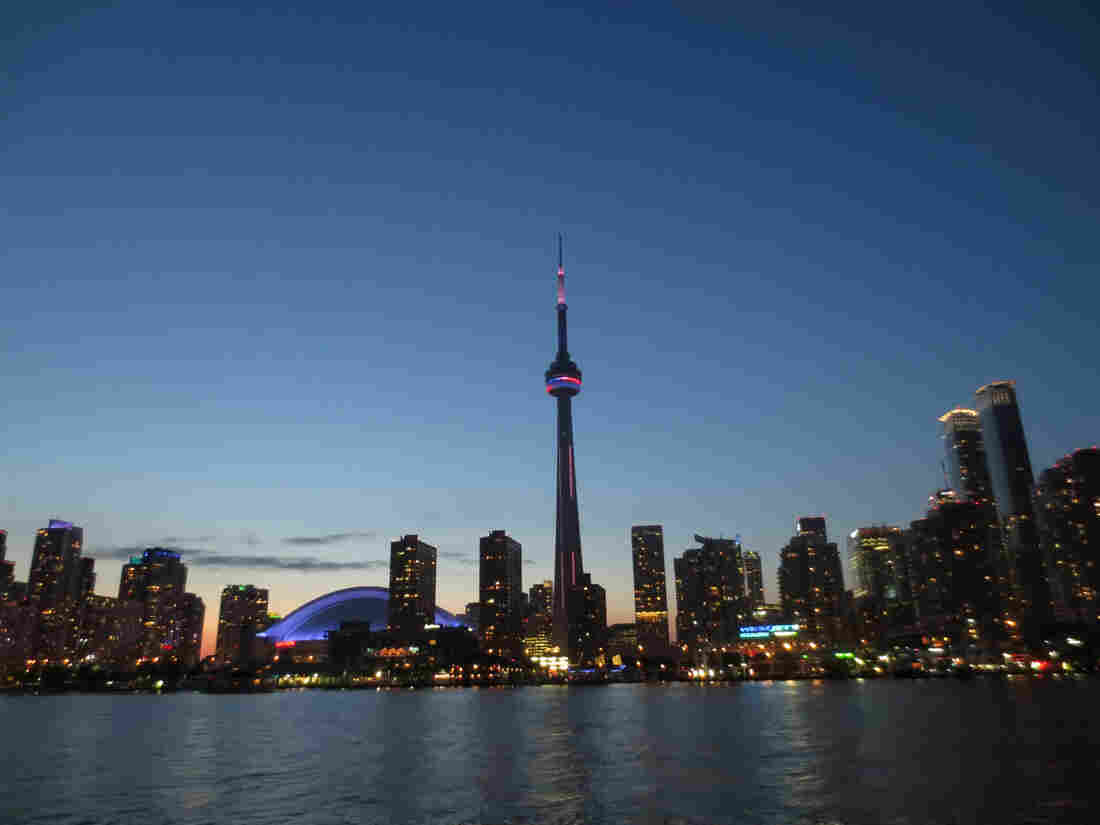 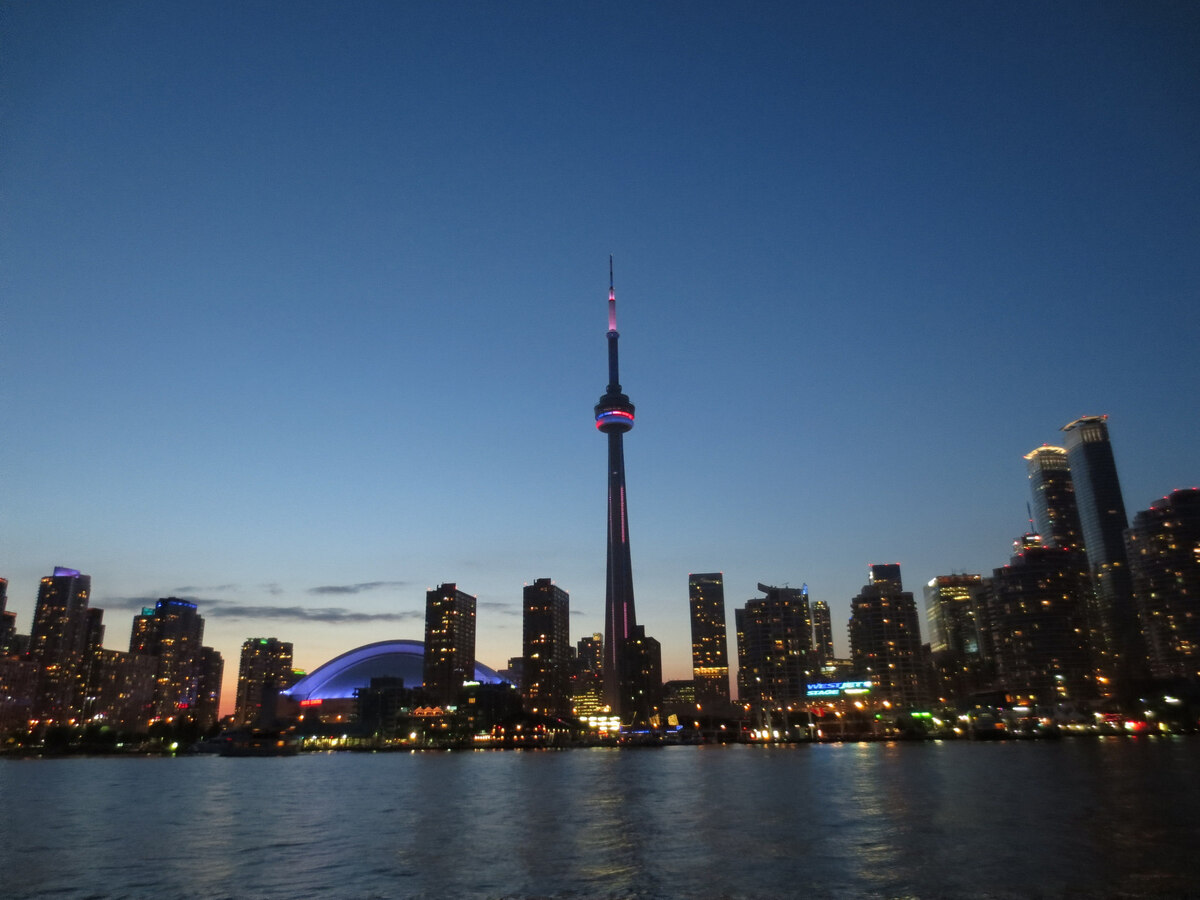 Toronto has become home to many new people.

As the Trump administration is expected to overhaul America's immigration system, some policymakers suggest looking north to Canada.

That's because Canadians see immigration as critical to their economic success. The nation has invited in so many immigrants that today, one-fifth of the population is foreign-born.

Yet Canadians don't seem to wrestle with anti-immigrant nativism that has erupted in the U.S. and Europe.

In Toronto, scanning a business directory shows how multicultural the city is: the Association of Bulgarian Engineers, the Canadian Network of Iranian Architects, the Association of Filipino Canadian Accountants. Half the population was born under another flag.

"If you ask me where I'm from, I say I'm from Canada. And if you ask me what's my nationality, I say Jamaica," says Michael Thomas.

He's a 53-year-old co-owner of the Caribbean Corner, a warm, laid-back grocery in the frigid precincts of downtown Toronto. He arrived in Canada 30 years ago.

For him, Toronto's astonishing multicultural character is a global village. "I love it," Thomas says in his island lilt. "I see the world in one place."

Canada knows what it wants: high-skilled workers and business entrepreneurs like Thomas. As such, Canada assigns points to prospective newcomers for job skills, education and language proficiency. They don't even call them immigrants.

"In Canada, we do refer to immigrants as 'new Canadians,' " says Margaret Eaton, executive director of the Toronto Region Immigrant Employment Council. "Because there is that expectation that they will come here and that they will stay. And our country, unlike others, actually provides a path to citizenship."

The night Donald Trump won the election, the Canadian immigration website crashed from the crush of panicky U.S. residents and citizens considering relocation. The next day, Rene Berrospi, a Peruvian-born immigration lawyer in Toronto, started getting calls, emails and Facebook messages from immigrants living in the U.S.

"I have a person who contacted me, her husband is black and also Muslim and they want to immigrate here because they see that Canada is more welcoming," Berrospi says. "I know there is the American dream, but people are now thinking in the Canadian dream."

'Our identity has never been stronger'

Yet Canadian immigration is not based purely on maple-leaf hospitality. This northern colossus — the second largest country on the globe — has only 36 million people. Eaton says a low national birthrate creates Canada's immigration imperative.

"We are not replacing ourselves. So we are always relying upon bringing new immigrants into the country, but it even has more urgency now," Eaton says. "If we want to maintain our standard of living, we are going to have to be bringing even larger numbers of immigrants."

The United States, which admits more legal immigrants than any other country, has a different approach. Here, it's all about family reunification: bringing in spouses, parents, children and siblings who live abroad.

But consecutive Congresses have failed to update the immigration program for 27 years. Foreign nationals can wait more than a decade for a green card. The lottery system for worker visas is overburdened. And 11 million unauthorized immigrants live in the shadows.

If we want to maintain our standard of living, we are going to have to be bringing even larger numbers of immigrants.

"The biggest contrast between the U.S. and Canada," says Chris Alexander, Canadian minister of Immigration, Refugees and Citizenship from 2013 to 2015, "is that we have reformed our immigration system continuously, intensively, for a decade at a time when the U.S. has been facing gridlock." Alexander is currently running to lead the Conservative Party. He says Parliament continually tweaks the immigration system because it's a national priority.

"The consensus in Canada that immigration is part of our economic future and that part of our identity has never been stronger," he says.

About 300,000 permanent immigrants come into Canada every year. That's equivalent to about one percent of its population, one of the highest ratios in the world.

Ashot Verdanyan and his wife, Lora Yekhstyan, are the kinds of immigrants Canada prizes. They live in a cozy apartment in a heavily multicultural Toronto suburb. They came over from Armenia as part of the skilled worker program. He teaches English; she's an industrial engineer. 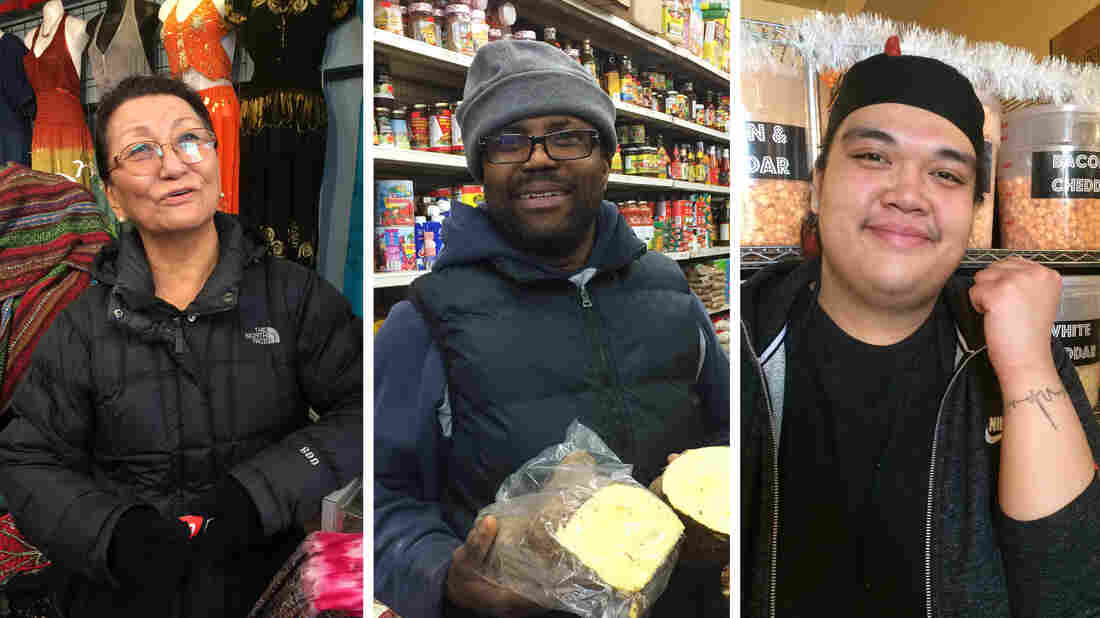 These three "new Canadians," as immigrants are called in Canada, have made Toronto their home. They work or own a business at Kensington Market. (Left) Dolkar Tsering was born in Tibet and grew up in Nepal. (Center) Michael Thomas came from Jamaica to reunite with family in 1987. (Right) Wynnona Yumol came to Canada from the Philippines with her parents when she was 2 years old. Marisa Penaloza/NPR hide caption 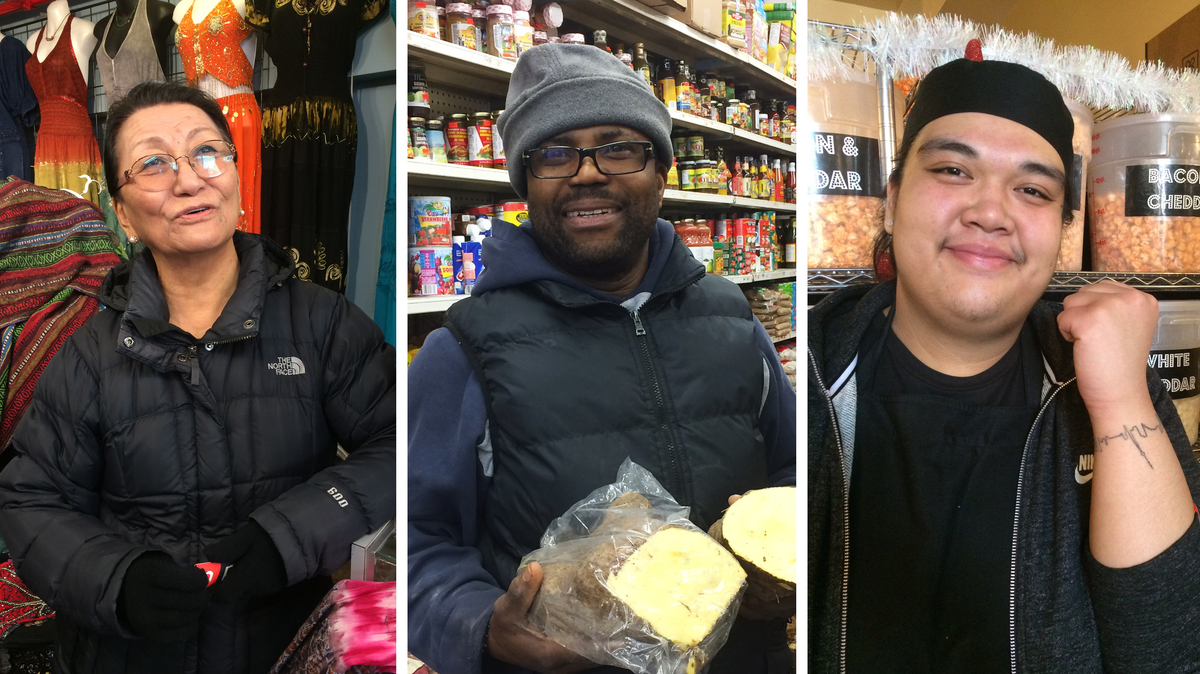 These three "new Canadians," as immigrants are called in Canada, have made Toronto their home. They work or own a business at Kensington Market. (Left) Dolkar Tsering was born in Tibet and grew up in Nepal. (Center) Michael Thomas came from Jamaica to reunite with family in 1987. (Right) Wynnona Yumol came to Canada from the Philippines with her parents when she was 2 years old.

"We find that the American immigration system hasn't been flexible," Ashot says. Before migrating to Canada, they both lived in Iowa for nine years getting advanced degrees. "The Canadian system is much more flexible in terms of immigration. Canada's system is very organized. We wanted to stay in the United States, but even given our credentials, we were unable to do that, because we were restricted."

When they arrived in Canada six years ago, Yekhstyan says the government had programs in place to help them transition.

This is not to say every immigrant has a job waiting for them. It's common to find doctors and engineers driving taxis in Canada.

Eaton of the Immigrant Employment Council says she hears complaints about employers turning down immigrant job applicants because they lack "Canadian experience."

"And that can become a bit of a code word for 'I didn't like your accent. We didn't think you would fit in,' " she says.

Some parts of Canada are more welcoming to newcomers than others.

"I don't care what people look like. I don't care if they're black, brown or yellow. It doesn't matter. But don't try to change our culture," says John Duggan, an oilfield truck driver who lives in St. Catharines, a town near Niagara Falls.

He's digging into an omelet at Angel's Café. Though Duggan himself was brought to Canada as a child from Ireland, he is critical of the pro-immigrant policies of the liberal prime minister, Justin Trudeau.

One reason there's not more social tension over immigrants is because Canada doesn't struggle with illegal immigration. This nation has fewer than 150,000 unauthorized immigrants. The United States — with its illegal border crossers and visa over stayers — has millions. It's partly an accident of geography.

"We are lucky to have the United States. And we have only one land border," Alexander says. "We have Russia to the north of us. We have Danes [and] they're not people swimming in from Greenland."

These days, Canadians are taken aback when they look south. They see the climate of fear and anger that has broken out in America toward Spanish-speaking and Muslim immigrants.

"Canada has looked at the United States in many ways as an example of a welcoming society," says Laura Dawson, director of the Canada Institute at the Woodrow Wilson Center in Washington, D.C. "And it's disheartening for many Canadians to see the United States be so fearful, to be so xenophobic and not to be more welcoming to other folks in the world."

Some Canadians wonder if that most American motto — E pluribus unum — out of many, one — has moved north.