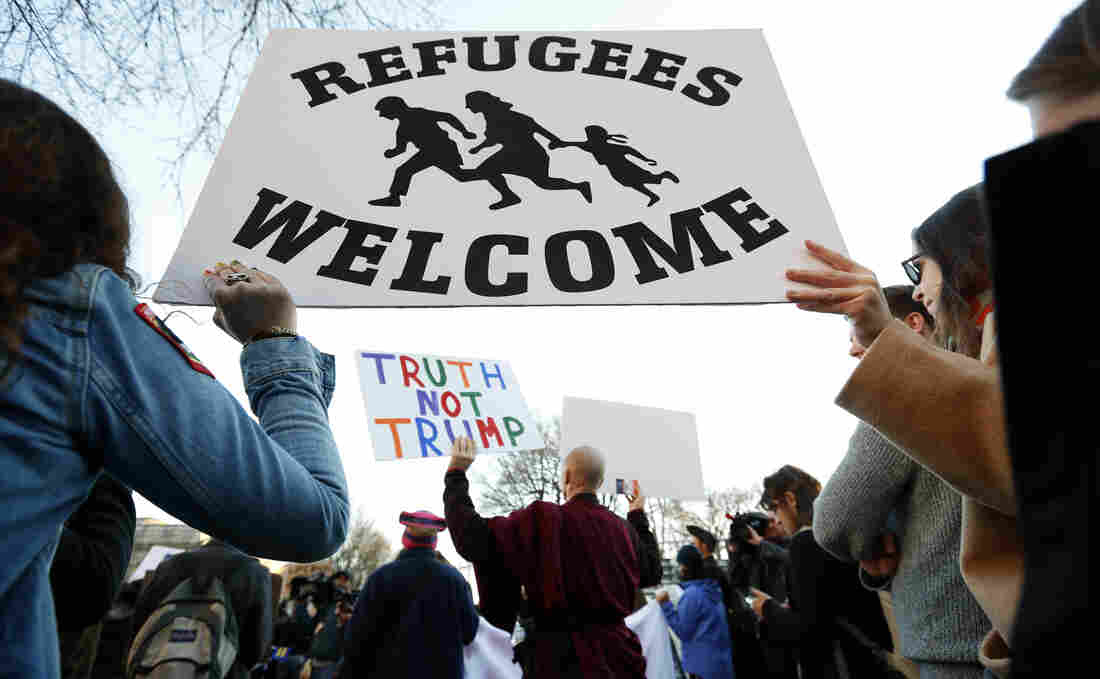 Protesters hold signs near the White House during a protest about President Trump's immigration policies on Wednesday. A proposed presidential action would freeze immigration from seven mostly Muslim countries for security reasons. But the list does not include any of the countries whose nationals have killed Americans in the U.S. since Sept. 11, 2001. Alex Brandon/AP hide caption 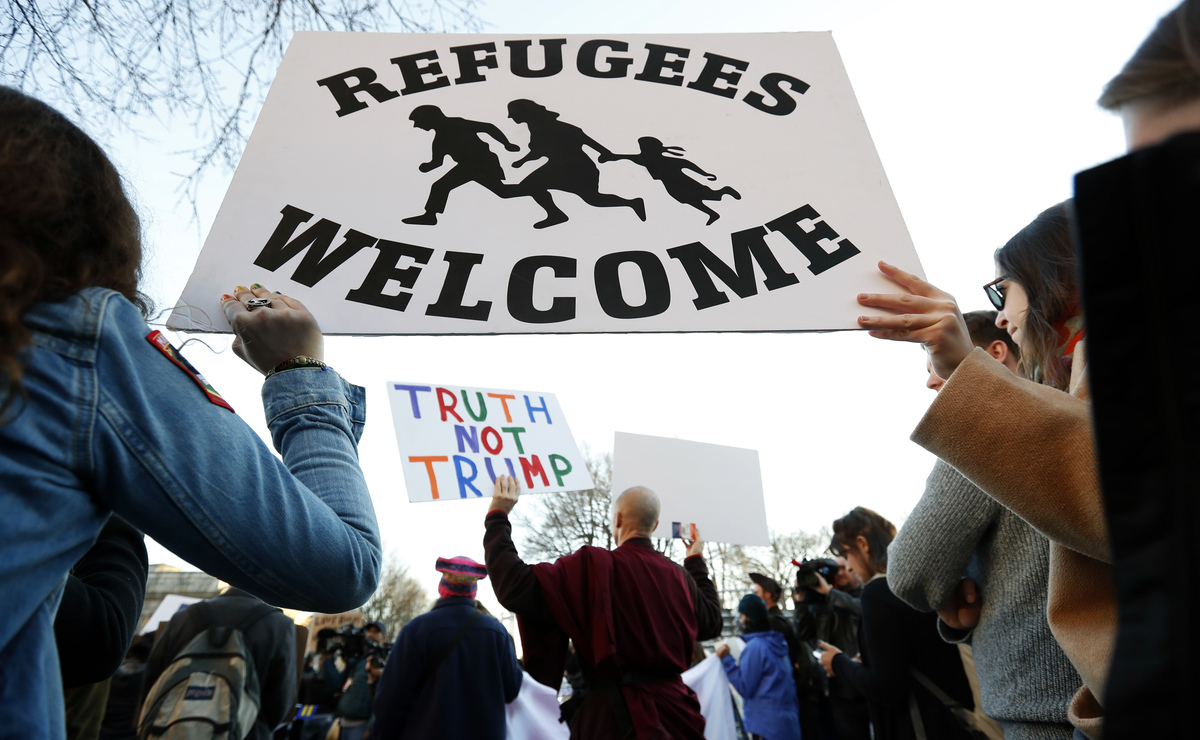 Protesters hold signs near the White House during a protest about President Trump's immigration policies on Wednesday. A proposed presidential action would freeze immigration from seven mostly Muslim countries for security reasons. But the list does not include any of the countries whose nationals have killed Americans in the U.S. since Sept. 11, 2001.

President Trump's freeze on immigration from seven mostly Muslim countries cites the potential threat of terrorism. But here's the twist — it doesn't include any countries from which radicalized Muslims have actually killed Americans in the U.S. since Sept. 11, 2001.

The president's executive action, which he signed Friday at the Pentagon, applies to these countries: Syria, Iran, Libya, Somalia, Yemen, Iraq and Sudan.

Yet no Muslim extremist from any of these places has carried out a fatal attack in the U.S. in more than two decades.

In contrast, here are the countries of origin of radicalized Muslims who carried out deadly attacks in the U.S., beginning on Sept. 11, 2001: Saudi Arabia, Egypt, Lebanon, United Arab Emirates, Pakistan, Russia and Kyrgyzstan.

The two lists are completely distinct, raising questions about the reasoning behind the White House plan.

"These seven countries were identified by the Obama Administration as needing further travel scrutiny," White House press secretary Sean Spicer said Sunday on ABC's This Week. "There are 46 other countries with Muslim populations that are not part of this and I think that's an important thing to note."

But there were many critics.

"I think this is an overreaction," says Charles Kurzman, a sociology professor at the University of North Carolina, who has tracked Muslim extremism in the U.S. for years.

"We just haven't seen a large number of Muslim-Americans answering the call to revolutionary violence that the self-proclaimed Islamic State and other groups have been pitching at them," he adds.

The nations on the White House list include several mired in civil wars, as well as those that host extremist groups. All have had fraught relations with the U.S. American drones or warplanes have conducted airstrikes in five of the seven.

The executive action read: "Deteriorating conditions in certain countries due to war, strife, disaster, and civil unrest increase the likelihood that terrorists will use any means possible to enter our country."

Citizens from the seven nations in Trump's order already faced great difficulty in obtaining visas, gaining refugee status or immigrating to the U.S.

"The U.S. immigration vetting system is extremely thorough. That is perhaps why we've seen so little violence by immigrants and refugees in the United States," said Kurzman. "As someone who brings over international students, international scholars for conferences and training programs, I know how hard it is to get even extremely upright folks through that system."

The 19 terrorists on the hijacked planes used in the Sept. 11 attacks were from four countries not on the new White House list: Saudi Arabia, Egypt, Lebanon and the United Arab Emirates.

Since then, radicalized Muslims have carried out a number of deadly attacks in the U.S. The precise count varies among groups that track the terror threat, but most groups cite fewer than 10 lethal attacks and fewer than 100 deaths, including New America, a nonpartisan think tank in Washington.

The deadliest single attack was at the Pulse nightclub in Orlando last June, which left 49 dead. The man responsible was Omar Mateen, whose parents were from Afghanistan, though he was born in New York. Afghanistan is not on the White House list.

In a few cases, foreign-born nationals have carried out lethal attacks.

They include Tashfeen Malik, who, along with her husband, was responsible for the San Bernardino, Calif., shooting that claimed 14 lives in December 2015. She was born in Pakistan but spent most of her life in Saudi Arabia until she came to the U.S. in 2014 on a fiancée visa to marry Syed Rizwan Farook. He was born in Chicago, to a family originally from Pakistan. Neither Pakistan nor Saudi Arabia are on the White House list.

Similarly, the Boston Marathon bombing was carried out by two brothers, Tamerlan and Dzhokar Tsarnaev. Tamerlan was born in the Soviet Union (now southern Russia), and Dzhokar was born in Krygyzstan. Those countries are not on the White House list.

Here's a list of attacks linked to radicalized Muslims in the U.S. since the Sept. 11, 2001, attacks: