Accessibility links
Facing Blasphemy Charges, Indonesian Politician 'Happy That History Chose Me' : Parallels The case against Jakarta's Christian, ethnic Chinese governor has raised serious concerns about religious and ethnic tolerance in a country that claims to be the Muslim world's most moderate. 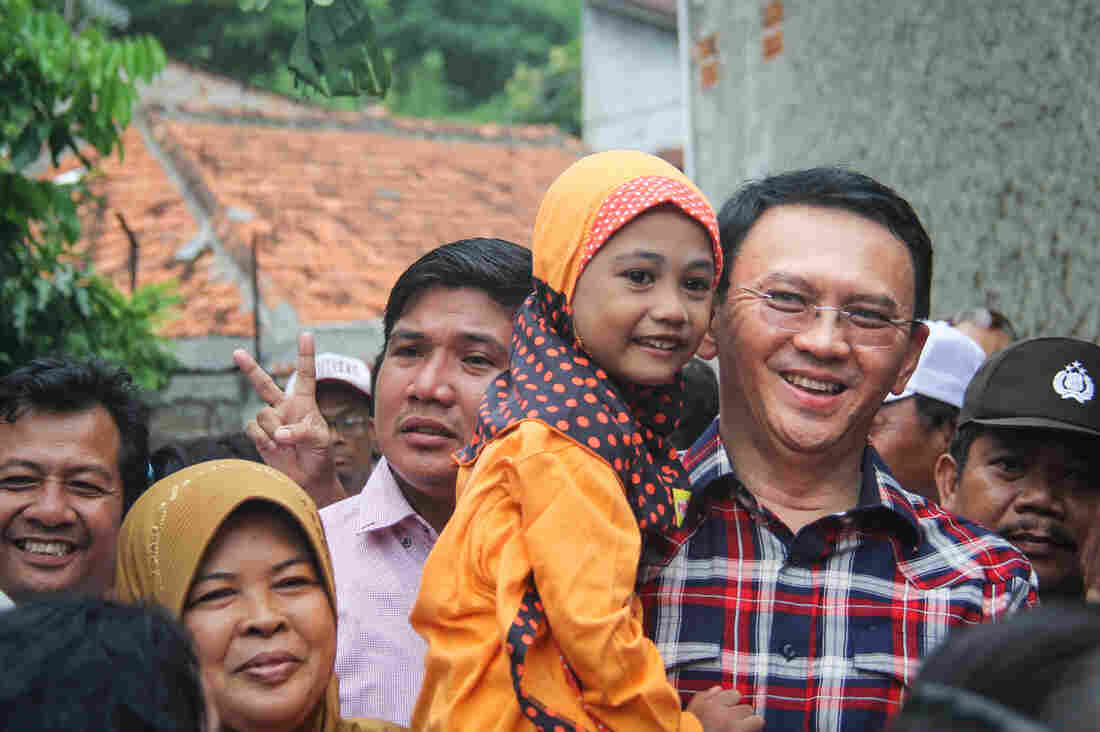 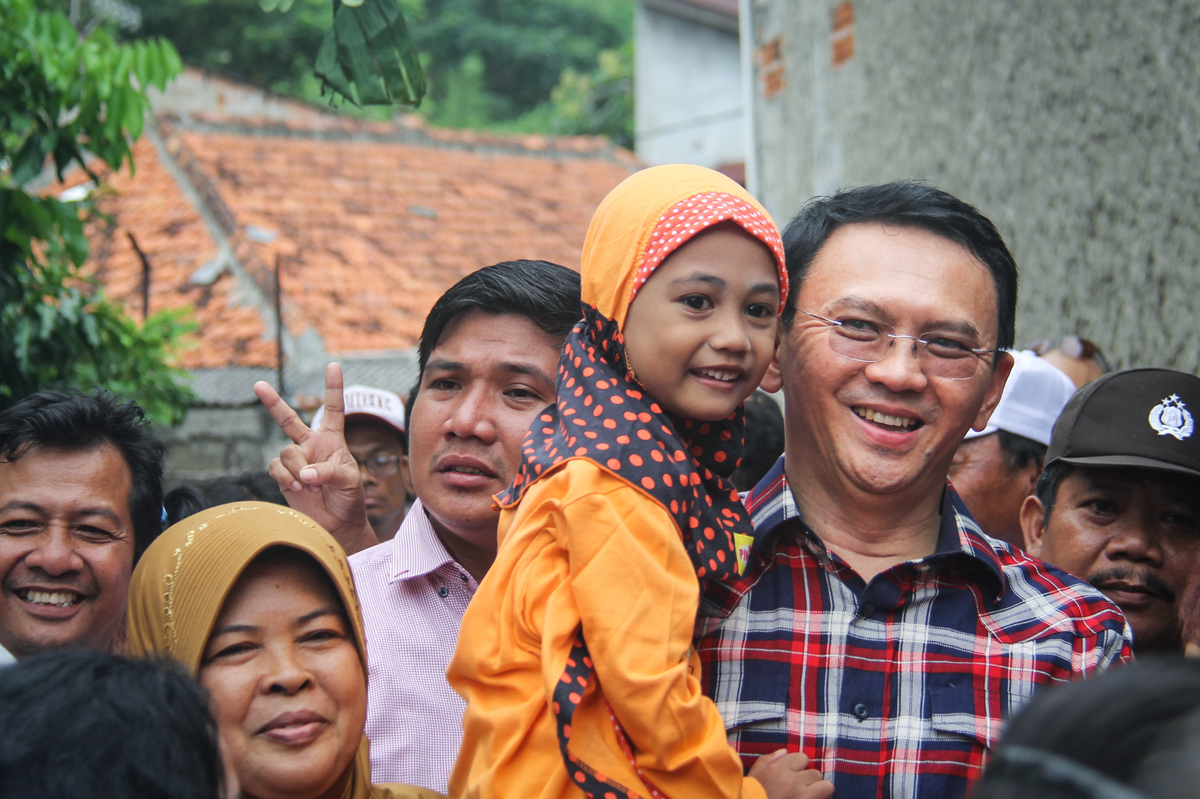 Residents and reporters follow Basuki Tjahaja Purnama, the first Christian, ethnic Chinese governor of Jakarta, as he campaigns for election in an East Jakarta neighborhood.

As he wends his way through the crowded alleys of a low-income neighborhood, Jakarta Gov. Basuki Tjahaja Purnama stops to pick up a young Muslim girl in a headscarf, as residents and reporters snap pictures.

He stops at a local mosque, where an all female-percussion team strikes up a groove with drums and tambourines to cheer him on in his campaign for re-election.

None of his supporters seem to mind that Basuki, commonly known by his Chinese nickname, "Ahok," is Christian and an ethnic Chinese — the first time such a person has governed the capital.

Why should they? Indonesia is proud of its reputation as not only the world's most populous Muslim-majority nation, but also the most tolerant and moderate in the Islamic world, home to millions of Hindus and Christians as well as Shiite, Ahmadiyya and other minorities within Islam.

But even as he campaigns for the governorship, Ahok is standing trial, accused of blasphemy against Islam. If convicted, he faces a maximum jail term of five years, and very few people charged with this offense in Indonesia manage to beat the rap.

Last September, Ahok told a group of fishermen that politicians who quoted from the Quran to say they should not vote for a non-Muslim were lying to them. But he also told the fishermen to vote their conscience.

Ahok, who has a reputation as a blunt speaker, later apologized, saying he had no intention of insulting the Quran or Islam.

But some Muslims took offense, and hundreds of thousands took to the streets in three massive rallies against Ahok that convulsed central Jakarta in November and December. Demonstrators continue to congregate at the courthouse where Ahok is on trial. Coils of barbed wire and riot police separate pro- and anti-Ahok protesters.

"God said, 'Do not vote for someone outside your group to become your leader,'" says Helmy, who goes by one name, selling Islamic flags at the protest. "So it is forbidden for us to vote for a non-Muslim." 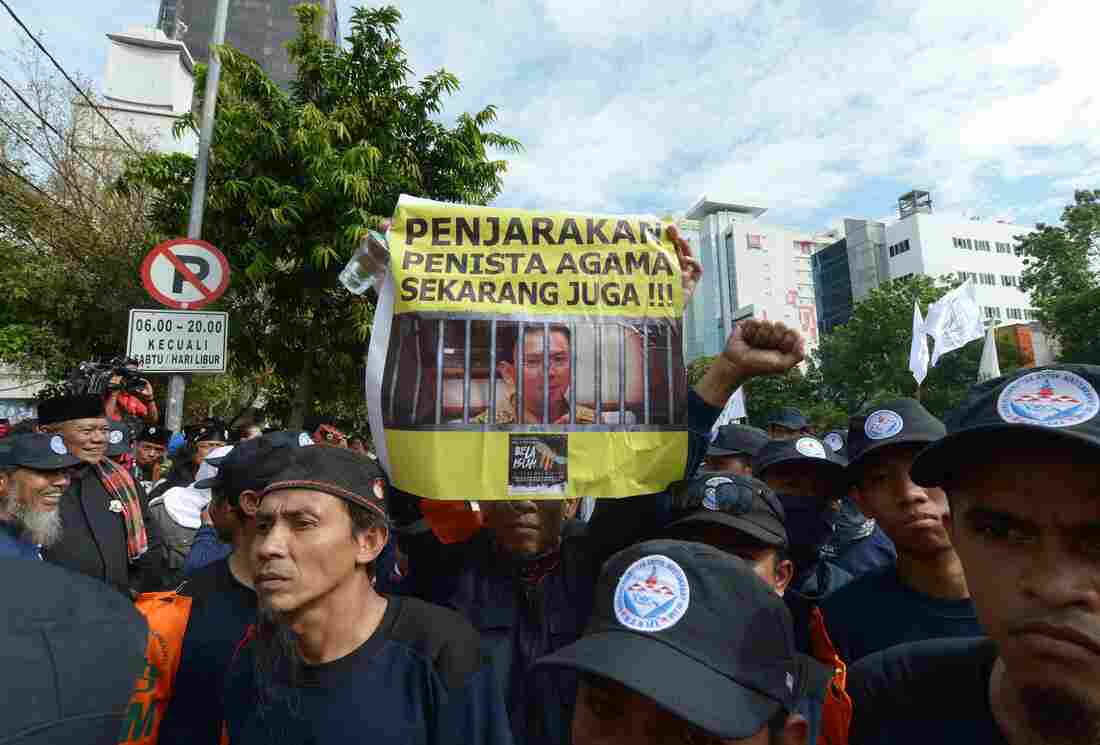 Indonesian Muslims demonstrate on Dec. 13, 2016, outside the court where Jakarta's governor, Basuki Tjahaja Purnama, is on trial for blasphemy. His allegedly blasphemous remarks sparked massive rallies against him in November and December. Adek Berry/AFP/Getty Images hide caption 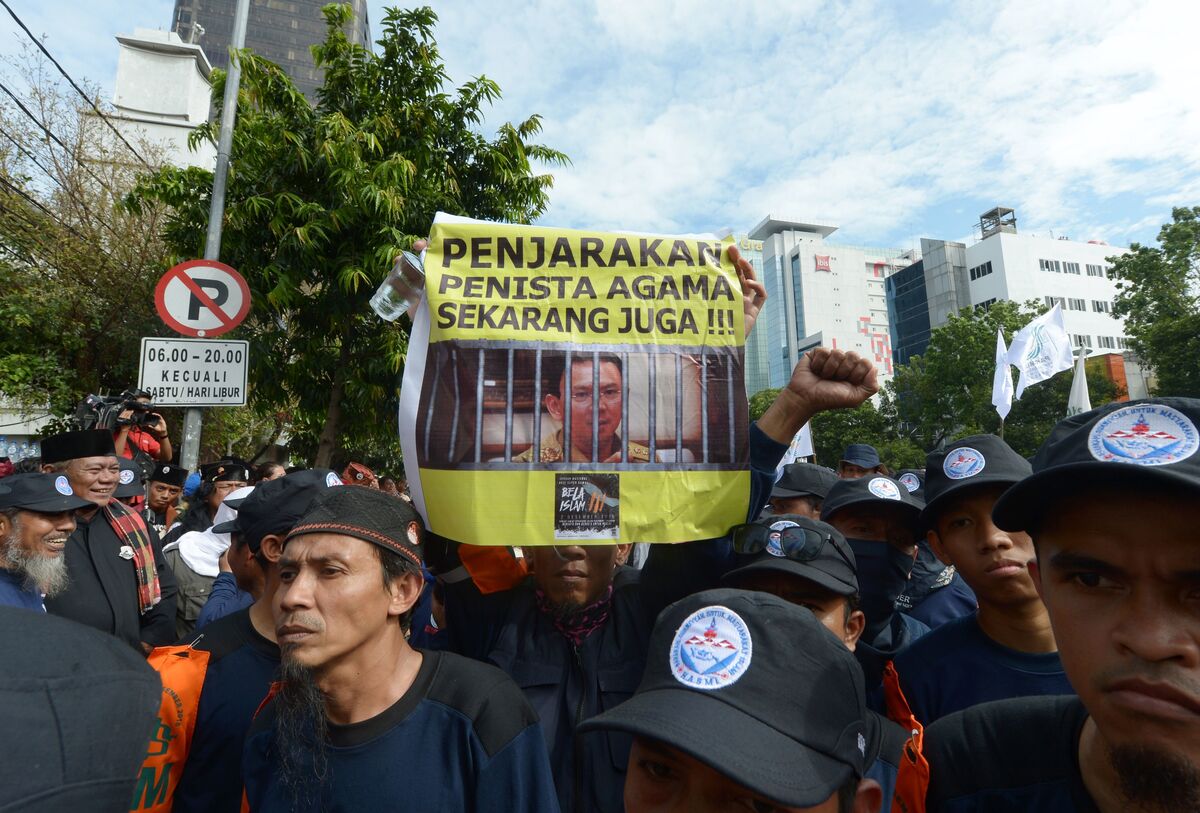 Indonesian Muslims demonstrate on Dec. 13, 2016, outside the court where Jakarta's governor, Basuki Tjahaja Purnama, is on trial for blasphemy. His allegedly blasphemous remarks sparked massive rallies against him in November and December.

Many Indonesians dismiss the ethnic and religious overtones of Ahok's case, describing it as simply a bare-knuckles political contest.

One of Ahok's biggest critics has been former President Susilo Bambang Yudhoyono. Though retired, he remains a formidable power broker. And his son, Agus Harimurti Yudhoyono, is Ahok's chief rival in the election.

Ahok's case has also uncovered age-old racial tensions and stereotypes. Many of his critics fear that Indonesia is at risk of political and economic domination by a minority of Chinese elites.

Ethnic Chinese account for about 1 percent of Indonesia's population. Under the dictator Suharto's rule, they were subject to discriminatory policies, including a ban on public displays of Chinese language and culture. Since Suharto's fall in 1998, Indonesia's ethnic Chinese have made a comeback, even as the anti-Ahok protests have been accompanied by an increase in racial epithets aimed at Ahok and other Chinese.

Many other Indonesians believe Ahok's case cuts to even deeper constitutional issues that define Indonesia as a nation.

In a lunchtime interview in the midst of a busy day of campaigning, Ahok says that Indonesia has already made these choices. The nation decided at its founding in 1945 to be a secular republic, based on the concept of "unity in diversity."

Rather than being angry at his situation, though, he says he's proud his case is putting these crucial questions before the Indonesian public.

"I'm happy that history chose me for this position," he says. "You couldn't buy it."

Ahok was not elected to his current position. He was Jakarta's vice governor until 2014, when then-Gov. Joko "Jokowi" Widodo was elected president and Ahok automatically took Jokowi's former post. Jokowi's trajectory is one that Ahok has said he wouldn't mind following.

Like Jokowi, Ahok has built his official track record and popularity by providing services and reforming government. Ahok has cleared slums, including Jakarta's infamous red light district, cracked down on endemic official corruption and shored up the capital's crumbling infrastructure.

As Ahok campaigned his way through her neighborhood near East Jakarta's Cibubur River, Muntema, a resident who goes by just one name, smiled approvingly. 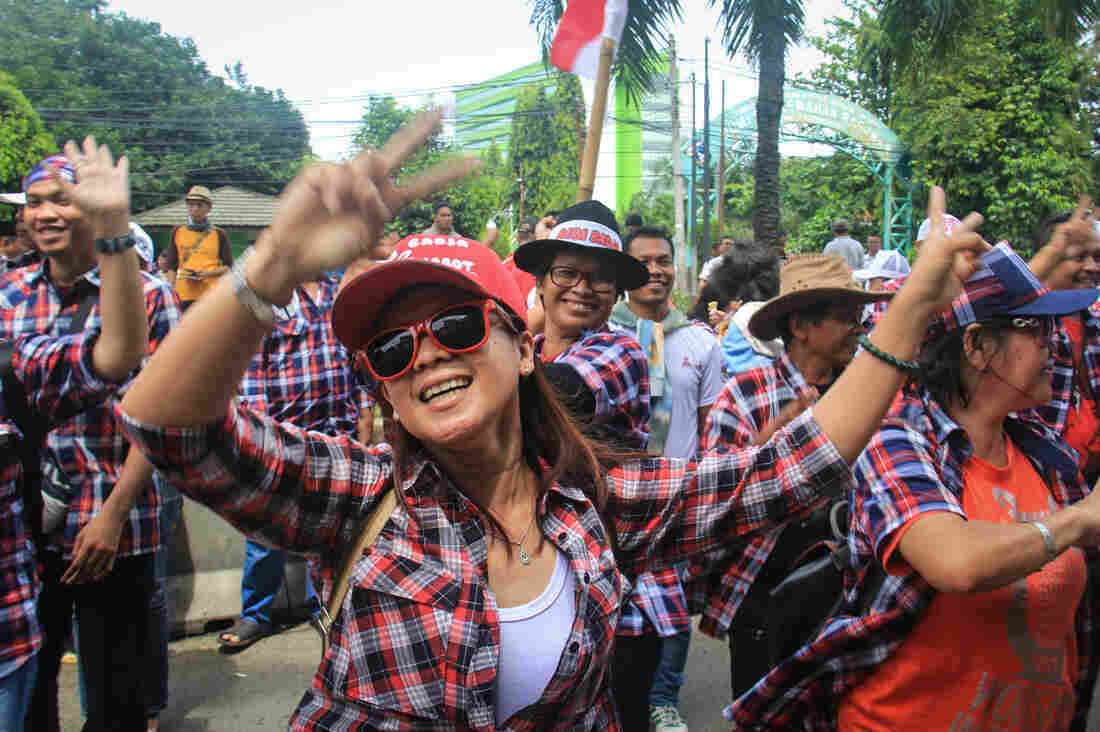 Demonstrators dance and rally in support of Basuki Tjahaja Purnama outside the courthouse where he is on trial for blasphemy. The case has raised concerns about religious and ethnic tolerance in a country that claims to be one of the Islamic world's most moderate. Yosef Riadi for NPR hide caption 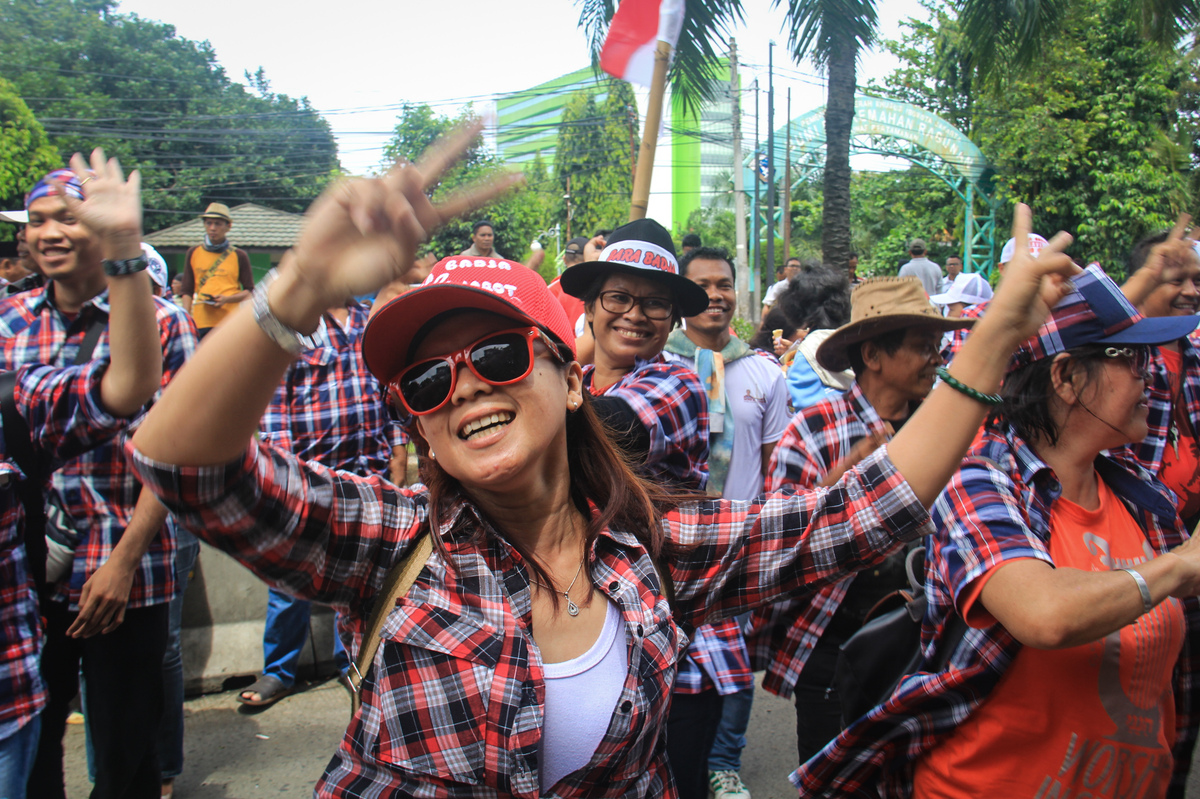 Demonstrators dance and rally in support of Basuki Tjahaja Purnama outside the courthouse where he is on trial for blasphemy. The case has raised concerns about religious and ethnic tolerance in a country that claims to be one of the Islamic world's most moderate.

"I'm very grateful that when we get sick, we no longer have to pay for health care," she says. "Also, the river here used to flood when it rained, but now that doesn't happen since the governor sent workers to dredge it."

Ahok himself says although helping the poor is very important to him, his real aim in politics is to offer Indonesians a sort of civics lesson: "How to educate the people to vote for the clean, transparent and professional politician."

Those who support Ahok and Jokowi see them as representative of this new breed of politician. And some analysts see Ahok's trial as the revenge of the old breed.

"This is the deep state of Indonesia reacting to an outsider president," says Andreas Harsono, a researcher with Human Rights Watch in Jakarta.

The deep state, Harsono adds, exists beneath the institutions of Indonesia's democracy, as well of those of other Southeast Asian nations, where younger voters are demanding more political participation from the entrenched elites who have governed their countries since the Cold War era.

Particularly worrying, Harsono notes, are reports that the Indonesian military has been giving military training to the Islamic Defenders Front, a vigilante group that has been at the forefront of the protests against Ahok.

A similar alliance of the military and Islamist groups in 1965 led to the worst political violence the country has ever seen: a purge of suspected communists that killed up to a million people.

The verdict in Ahok's trial is likely to come sometime after next week's gubernatorial election. Even if he wins that election, he faces a maximum five-year jail term if convicted of blasphemy.

Whether Ahok could then serve out his term as governor is unclear.