Accessibility links
In Mexico, Fans Love To Hate Lucha Libre Wrestler Playing The Character Of A Trump Supporter : Parallels For Sam Polinsky, a Pittsburgh wrestler who performs as a loud Trump supporter, the enraged reaction his character elicits from Mexican audiences is exhilarating. He aspires to be Mexico's Hulk Hogan. 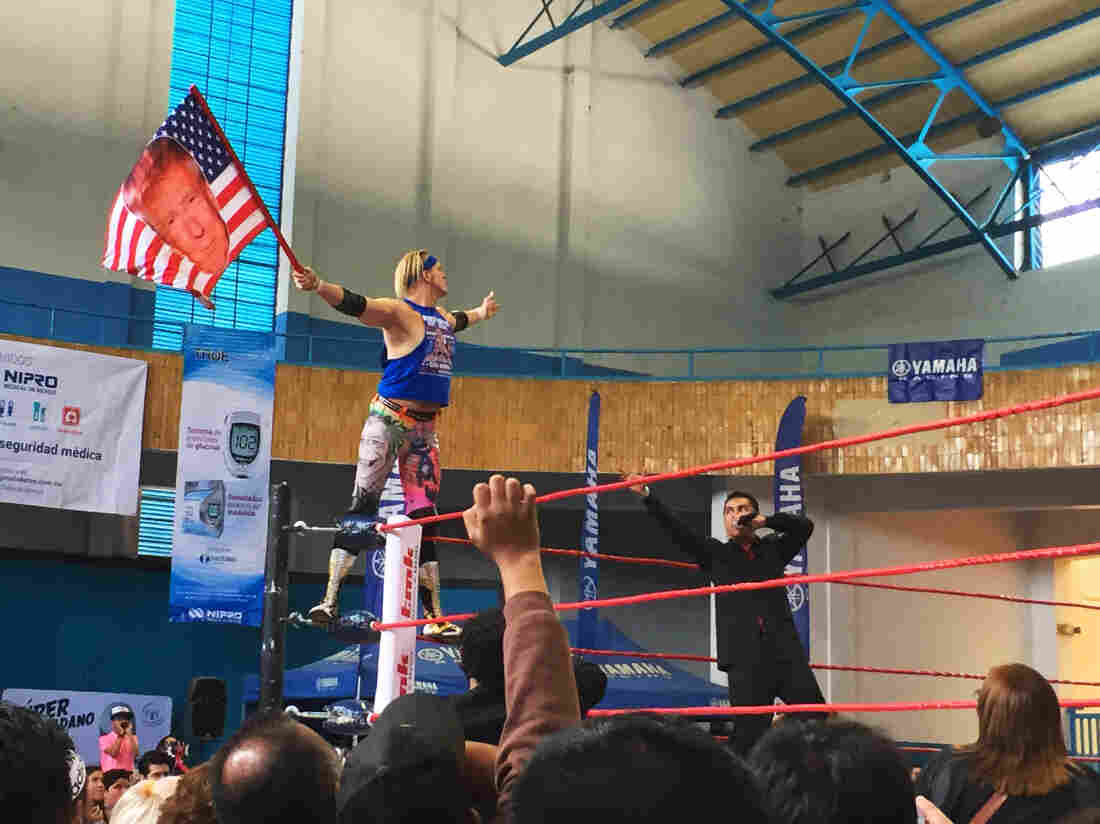 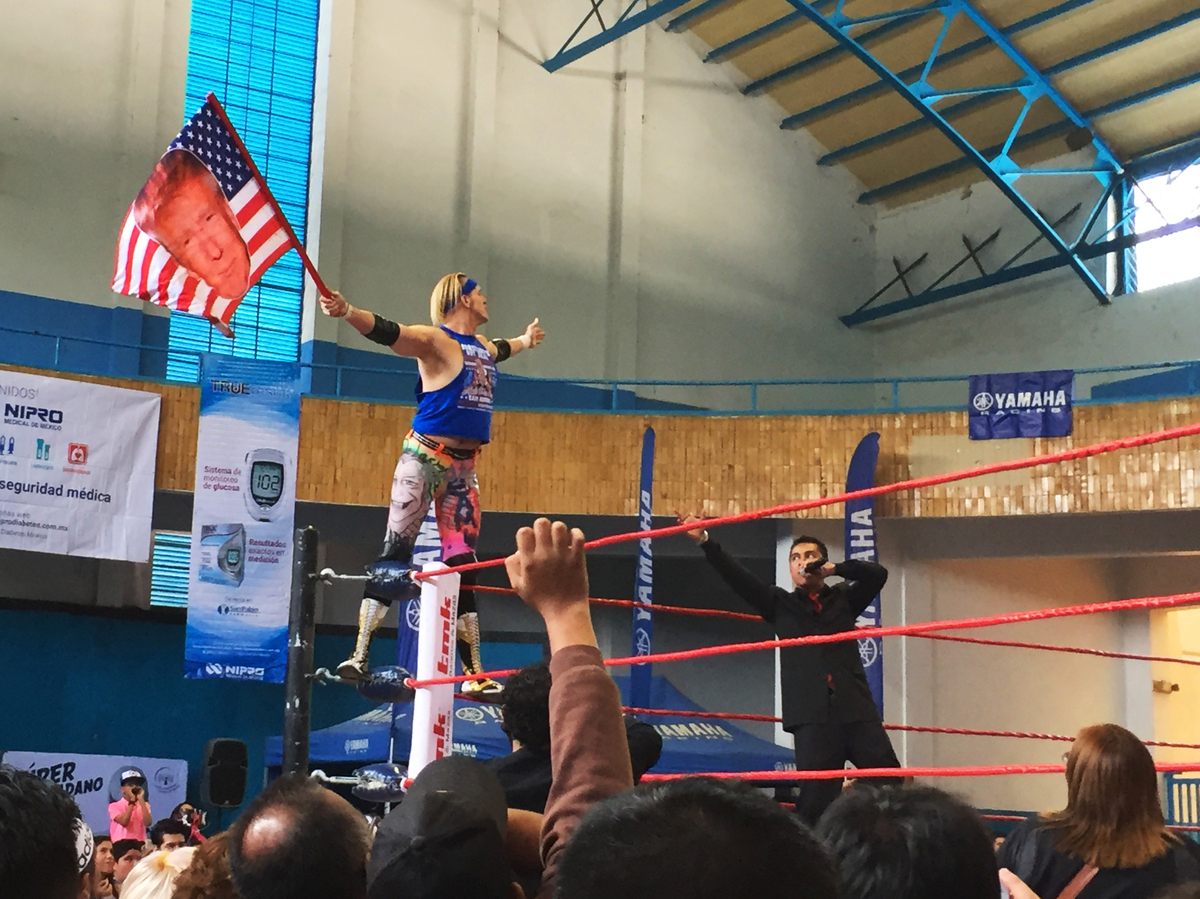 In Mexican lucha libre — professional wrestling known for its masked fighters and cartoonish style — the bad guys rule. They're known simply as rudos.

"Mexican lucha libre is for rudos. We welcome any rudo who wants to come in here and be badder than the others," says Marco Espinosa, a fan, from beneath his souvenir lucha libre mask.

So it made sense for Sam Polinsky, a 27-year-old wrestler from Pittsburgh, to try his luck south of the border. He came to Mexico about nine months ago and branded himself as Sam Adonis, "El Rudo de las Chicas" or the "Ladies' Bad Guy."

When Donald Trump won the presidency after a campaign that regularly scapegoated and insulted the Mexican people, Polinsky saw an opportunity to turn up the heat on his bad-guy character.

"I had a perfect idea: Why not come to the arena with [an American] flag, but I'm gonna take this to a whole other level," he says, unfurling a flag and grinning. "I have a 4-ft. flag with the face of Donald Trump on it."

With this prop, he became the surrogate of Donald Trump in Mexican lucha libre.

His over-the-top, absurd style blends well into the sport. It is a wacky, colorful show punctuated by amazing acrobatics and always following the same script: The good guys, known as técnicos, the equivalent of "babyface," line up across from the rudos in a battle of justice.

On a Friday evening in Mexico City, Polinsky is getting ready for his latest fight at Arena México, the holy site of Mexican wrestling, which regularly draws 10,000 fans. His girlfriend blow-dries and straightens his long blond mohawk. She helps him spray tan his face and body, using a mini-paint roller to smooth out the streaks.

For Polinsky, being a baddie — especially one who generates such immediate, enraged reactions from Mexicans — is exhilarating. 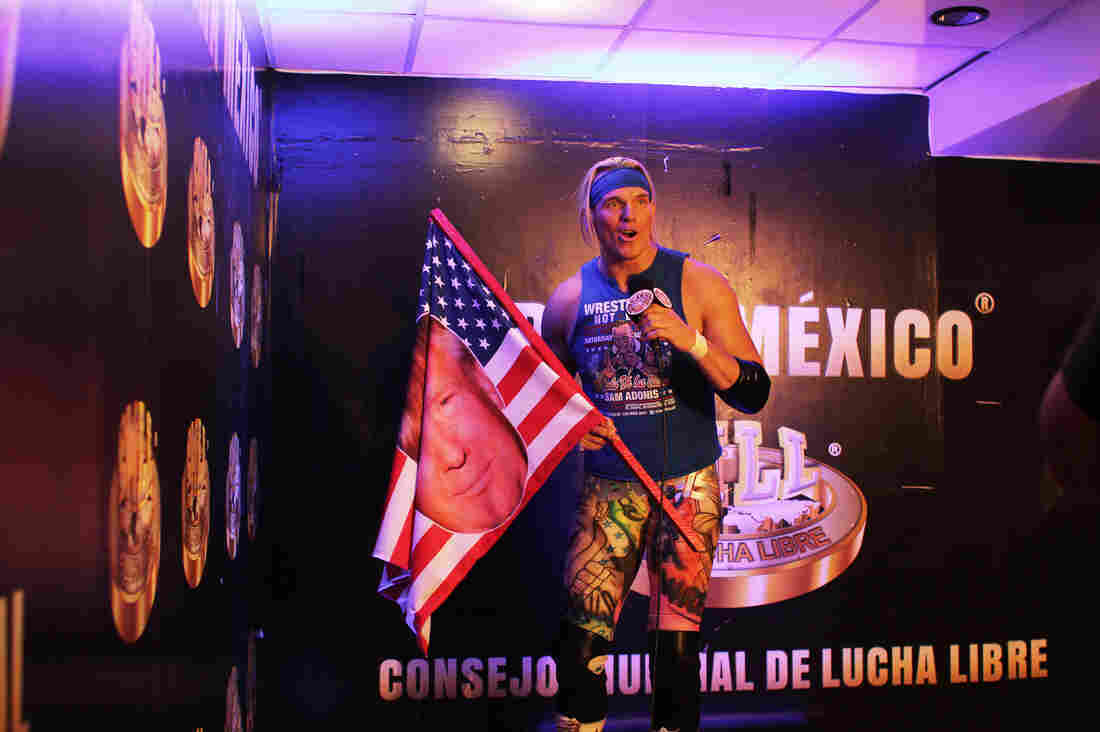 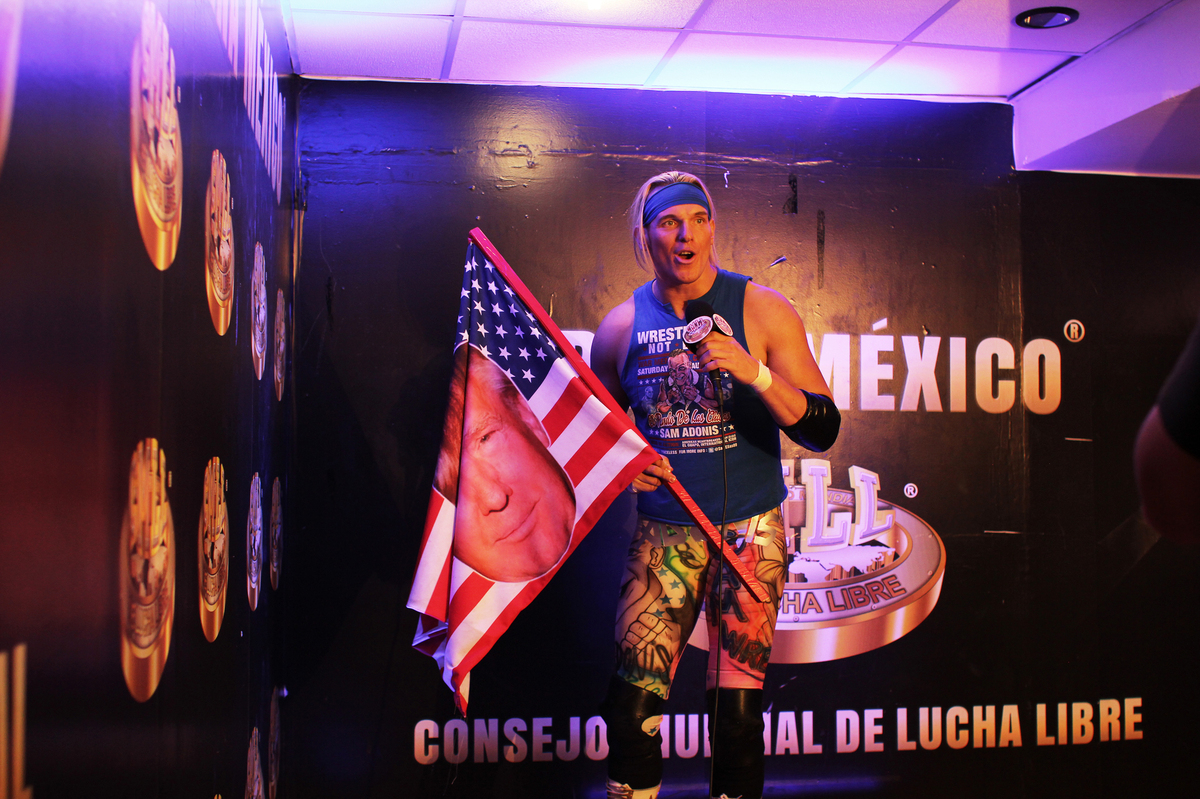 "Go America! Go Trump!" lucha libre wrestler Sam Adonis yells in a promotional video, beamed out to the crowd of 10,000 waiting to see him fight.

"My favorite thing to do is to get some father and mother to bring their kid to a show, and they're enjoying it with a smile on their face," he says as he spreads tanning spray on his face. "When I can get that dad five minutes later to want to jump over the rail and cut my throat, that's a great feeling. That's how I know I'm good at my job."

Flaunting Donald Trump in Mexico is a surefire way to make the staged emotions in the ring hit real human nerves. Trump began his presidential campaign in 2015 by calling Mexicans "rapists" and saying they brought crime and drugs to the U.S. Since his inauguration, he signed an executive order to build his promised border wall. He has had several Twitter spats with Mexican President Enrique Pena Nieto over trade and the wall.

But is Polinsky a Trump fan in real life?

"I can't say I support him, but I definitely supported him more than Hillary Clinton," he says. "But I'm thankful he's in the position he's in, because it's putting more money in my pocket."

He does admire Trump's showmanship.

"I guarantee a lot of his success came from his experience in professional wrestling," he says.

In the early 2000s, Trump regularly participated in WWE shows, often as the adversary to WWE CEO Vince McMahon. Those theatrics, Polinsky says, are similar to what Trump has done as a politician. "You have Trump the persona and Trump the actual person," he says.

Backstage at Arena México, Polinsky is shooting a promo for his fight, which is being beamed directly to the jumbotron inside the arena.

"Go USA! Go Trump!" he yells in his accented Spanish. Boos and whistles from the crowd echo backstage.

As he turns to enter the arena, he reveals the back of his neon, spray-painted tights: on his right butt-cheek is a cartoonish version of Trump's face.

Polinsky emerges in a flood of spotlights, waving his American Trump flag proudly, beaming as the crowds boos and hisses.

As the fight kicks off, the crowd waits anxiously to taunt Polinsky. He wins the first takedown and grabs his flag again, mocking the audience. But he's quickly bested by a gold-plated opponent named Angel de Oro. He slams Polinsky to the mat with a suplex and the crowd explodes. Crude chants begin. Polinsky's character gets even angrier, yelling back at his hecklers.

In the end, Polinsky and his fellow rudos lose. Dejected, he grabs his American Trump flag and walks offstage, his head hanging low.

"Fuera!" Get out! the crowd chants.

After the fight, Angel de Oro stays firmly in character as he recounts the emotions of the battle.

"The fans wanted us to take it to Sam Adonis," he says. "To be honest, it felt good hitting him, to return every one of the insults he threw at the Mexican people with a punch."

But back in the arena, something unexpected happens. None of the Mexican fans have anything bad to say about Sam Adonis.

"He's great," says Marco Espinosa, the lucha libre diehard fan. "The important part of lucha libre is to relieve your stress, to yell, to get the crowd fired up."

Perla Covarubbias, the lone woman in a group of screaming guys, also approves. "I think he's doing really well to take advantage of this moment and bring it to the stage," she says. "And when he loses, he makes the Mexicans look like heroes."

This is the key to Polinsky's shtick: the badder the American villain, the greater the Mexican hero.

But Polinsky knows there could be a political limit to his character.

"If the situation between the U.S. and Mexico were to get aggressive or violent, then I'd have to think about it," he says. "But this situation is too much, and it's too good to pass up right now, so I'd like to milk it for everything it's worth."

As President Trump intensifies his call for a border wall and a tax on Mexican imports, Sam believes he's cementing himself in Mexican culture.