Accessibility links
Turkey's President Erdogan Pushes For Broader Powers : Parallels Turks will vote in April on constitutional changes to eliminate the post of prime minister and shift his powers to President Recep Tayyip Erdogan. Critics warn the changes will lead to one-man rule. 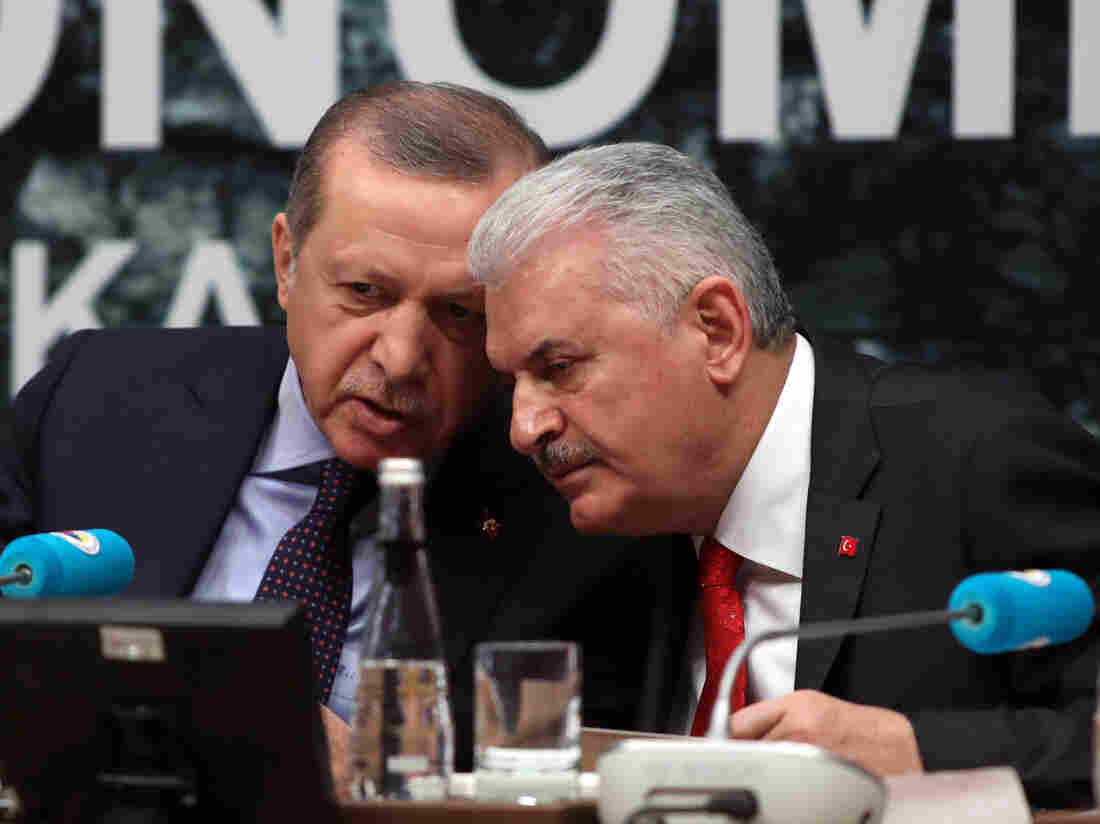 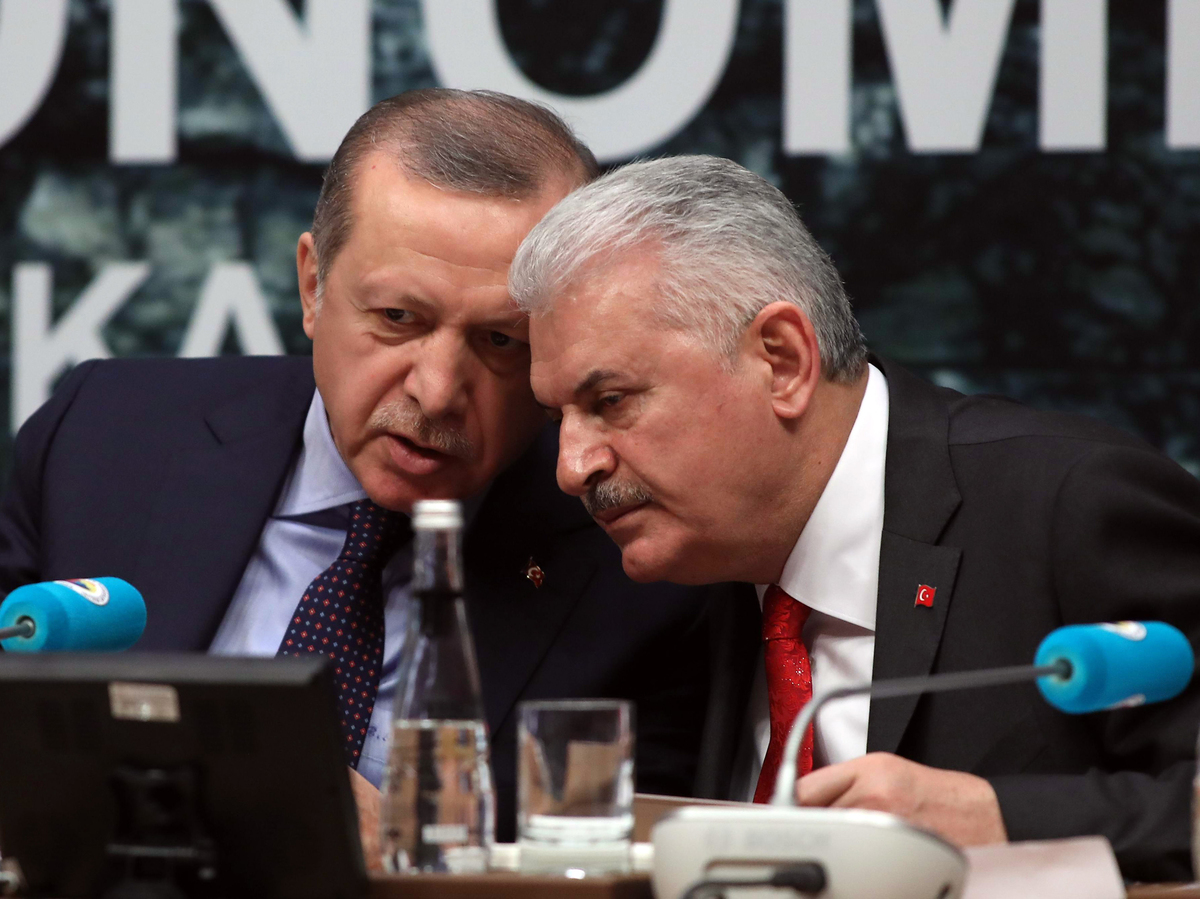 President Recep Tayyip Erdogan (left) and Prime Minister Binali Yildirim speak at the Turkish Union of Chambers and Commodity Exchanges Economic Council in Ankara on Feb. 7. Voters will decide in April whether to give Erdogan broad, new powers that would eliminate Yildirim's job.

This spring, voters in Turkey are being asked if they want to transform their government, giving broader executive powers to President Recep Tayyip Erdogan. Opposition parties say the proposed constitutional changes would put Turkey on the road to one-man rule, but supporters say in these dangerous times, Turkey needs a strong leader to fend off enemies at home and abroad.

The vote is expected in April, and the government is already in campaign mode, trumpeting its accomplishments and promising more if the referendum is approved.

What might have been just another sleepy ribbon-cutting ceremony, a recent re-launch of a long-stalled Istanbul housing project, turned into a full-on rally. Prime Minister Binali Yildirim told a flag-waving crowd the answer to Turkey's problems is a "yes" vote on a strong presidency.

Yildirim was only appointed prime minister last year, but he's campaigning hard for voters to eliminate his job. Under the new system, Turkey would have no prime minister. His executive and administrative powers would be transferred to Erdogan.

President Donald Trump spoke to Erdogan this week, affirming Turkey's status as a key strategic partner and NATO ally. It's not clear what Trump thinks about Erdogan's increasingly authoritarian style, which bothered the Obama administration.

Erdogan began running Turkey in 2002 as prime minister, and has effectively controlled the country ever since, despite moving into what had previously been the largely figurehead role of president in 2014. He presided over years of robust economic growth, but became entangled in regional and internal conflicts that brought a wave of terrorist attacks and economic decline to the country.

Some Turks seem to be rallying around Erdogan in part because of the current gloomy outlook. Faisal Demir, 55, believes Western powers have it in for Turkey, so everyone he knows is ready to stand with their tough-talking president.

"In the history of our republic, we haven't had a better leader," he says. "And now the wolves are living among the sheep, you know? These are dangerous times, so we're going to say yes to these changes."

Many Turks agree that the country could use a new constitution. The current one was enacted in 1982, after a military coup toppled the elected government. But there's little agreement about how exactly it should be changed.

"Yes" voters argue that America has a strong president, so Turkey should, too. And there would be similarities: like the U.S. president, Erdogan would become a partisan leader, and his cabinet picks would be independent from Turkey's parliament. Currently, the cabinet members are also members of parliament and are accountable to parliament in various ways.

But analysts say there are crucial differences, especially when it comes to democratic checks against presidential powers. The proposal would give the president increased influence over the Turkish parliament, as well as more control over the hiring and firing of judges. The changes would also permit Erdogan to run for two more terms, potentially remaining in office until 2029.

Ersin Kalaycioglu, a political scientist at Sabanci University in Istanbul, says it's impossible to predict how Erdogan would use some of these new powers, but critics are worried nonetheless.

"It [would be] a strong presidency, nothing like any president of the United States has ever experienced," he says. "If this amendment carries, then for a while, Turkey will have a system with very little, if any, checks and balances, as far as many of the experts can see."

In Istanbul's Balik Pazari or Fish Market Street, a silver-haired fishmonger named Sener doesn't want to give his family name since he plans to vote no on the referendum. He says he doesn't expect a level playing field, with the media already focusing on the "yes" campaign. Dissenters may be treated harshly.

"I saw a bunch of young people, they wanted to demonstrate against the referendum," Sener says. "They got arrested. So that's the deal – if you say no, you get arrested."

At the moment, experts say Erdogan is enjoying even greater powers than he would if the referendum is approved. That's because Turkey has been under a state of emergency since last July's failed coup attempt. Over 100,000 people have been sacked or suspended, and thousands have been charged with backing the coup or supporting terrorists. The constitutional changes, if approved, would only go into effect once the state of emergency is lifted.

Constitutional law professor Ibrahim Kaboglu at Marmara University has spoken out against the idea of asking Turks to hold such an important vote while under a state of emergency. He fears the "no" camp will be intimidated, and the media will be afraid of offending the government. He calls it "a big and essential problem. It's a serious, serious problem."

Just days after talking with NPR about the referendum, Kaboglu was himself caught up in the latest emergency decree – fired from his job, along with hundreds of other academics.