Accessibility links
As Trump Threatens To Ditch NAFTA, Tijuana Residents Face Uncertainty : Parallels Tijuana, Mexico, is a prime example of an integrated, global economy, and Trump's threats to ditch NAFTA have residents on edge. They fear their livelihoods are hanging in the balance. It's hard to find a place in Mexico more transformed by the North American Free Trade Agreement than Tijuana. The border city has exploded in growth since the trade pact was signed in 1993. Justin Sullivan/Getty Images hide caption 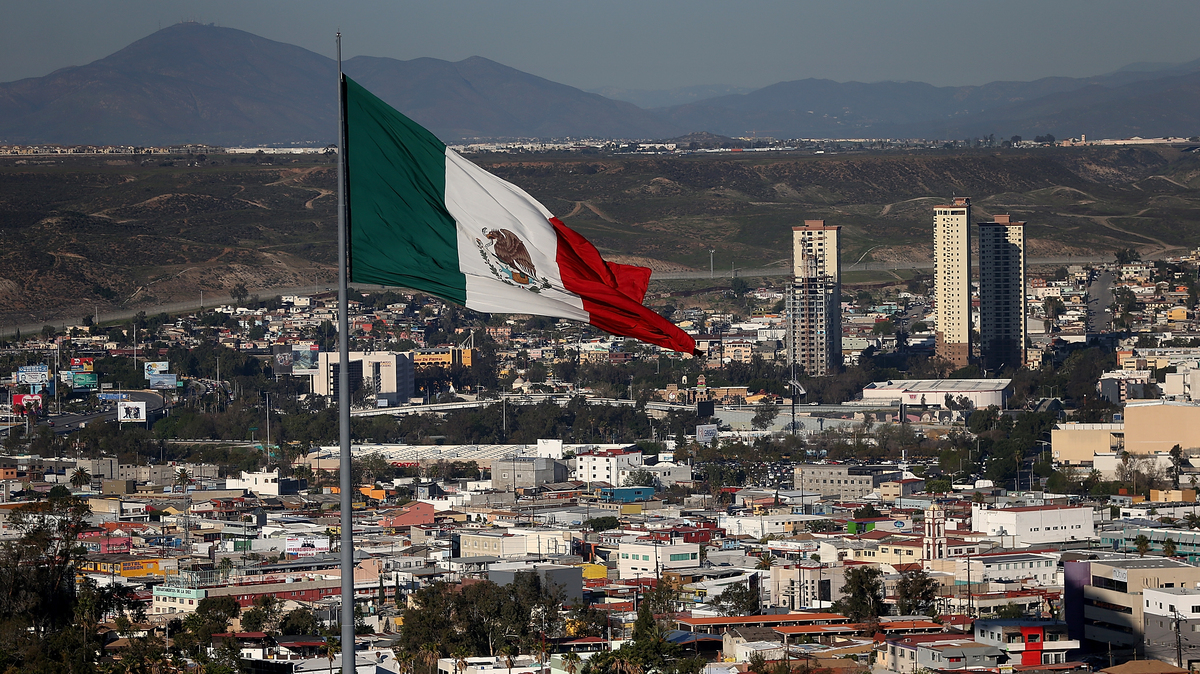 It's hard to find a place in Mexico more transformed by the North American Free Trade Agreement than Tijuana. The border city has exploded in growth since the trade pact was signed in 1993.

It's hard to find a place in Mexico more transformed by the North American Free Trade Agreement than Tijuana. The border city has exploded in growth since the trade pact was signed in 1993, when about 100 international manufacturing plants dotted the hilly dry landscape. Today, according to Luis Hernández, the current head of INDEX, Tijuana's Maquiladora Association, there are now about 700 multi-national factories making everything from flat screen TVs to trucks to pacemakers

But President Trump's repeated threats to either scrap NAFTA or slap on a 20 percent tax on all goods leaving Mexico and entering the U.S. have many here worried.

Hernández says it's all concerning, but "we are not going to be responding to tweets, social media until they become more concrete."

No one seemed willing to respond to the current cross border tensions either. I tried talking to more than a dozen plant managers, either personally, or through industry contacts that in the past have easily granted me access inside the multi-national factories. This time, nada. One small manufacturer in Tijuana's growing medical device manufacturing sector agreed to a meeting, but when I showed up at the small industrial park not far from Tijuana's famed 5 and 10 busy urban intersection, guards at the gate informed me they were instructed not to let me on the premises.

Hernández says he's "not surprised" that companies don't want to talk. Not many are willing to risk the high profile wrath of a 140 character Presidential tweet. But Hernández insists despite the desire to keep a low profile, not one company has left Tijuana. He did say some have put projects or expansion plans on hold, although he declined to provide details.

While everyone waits for the new administration to unveil its plans to revamp NAFTA, trade continues unabated across the border, now at more than a million dollars a minute. While Tijuana officials say more than 200,000 jobs here are directly tied to the cross border economy, one recent study by the Wilson Center in Washington, D.C., puts that number at more than twice as much, more than 500,000 in neighboring California.

In addition to that trade, the jobs and all the personal cross border relationships are now being strained says Kenn Morris, who analyses industrial markets in Tijuana and throughout Mexico at his Crossborder Group.

"There's a sense of loss, of wondering why their next door neighbor and one of their best friends is actually no longer interested in that friendship anymore," Morris says.

In Tijuana those relationships are now in their third generation. Maquiladoras, or multi-national manufacturing plants, have long been in Baja, Calif., predating NAFTA by some 30 years.

"Managers here have more than 40 years figuring out how to work together, that's all being thrown out the window," says Morris.

Alejandra Mier y Teran feels that keenly. She grew up in Tijuana on the plant floor of her father's manufacturing firm. Enrique Mier y Teran, who many dubbed, the father of maquiladoras, opened one of Mexico's first export oriented manufacturing plant in the 1960s. The plant made women's hair pin curls.

"I was raised in both Tijuana and San Diego, my dad just called it SanDiJuana. it was one region to me," says Mier y Teran, who now lives in Chula Vista a suburb of San Diego and heads a local Chamber of Commerce there.

She's worried what a 20 percent tax on Mexican imports will do for U.S. consumer goods.

"It will just make things more expensive here," she says.

She says Trump's plan for scrapping NAFTA could make Tijuana a "ghost town" because many firms would just relocate jobs to China or Vietnam, not back to the U.S. as Trump claims.

Mier y Teran's father died last summer and she sadly admits that in some ways she's glad he's not around to see his life long work and dream of an integrated cross-border region being disparaged and dismantled.

Born From The Border, Tijuana Grows In New Ways

Not everyone is as worried about the border city's economic vitality in Trump's new world order. David Mayagoitia Chair of the Tijuana's Economic Development Corporation says residents of the border have suffered tough times and economic downturns before. He remembers back in the 2001 when China entered the World Trade Organization and many firms left Tijuana for even cheaper labor costs in Asia.

He says a similar job loss could occur if NAFTA is ripped up. But, he adds, "we are resilient. We here at the border are used to change and we are ready to adapt."