Accessibility links
At Risk Of Arrest, Villagers Aid Migrants Crossing French-Italian Border : Parallels Thousands of migrants are trapped on the border between France and Italy. New French regulations are supposed to keep the migrants out, but residents are trying to help them enter the country. 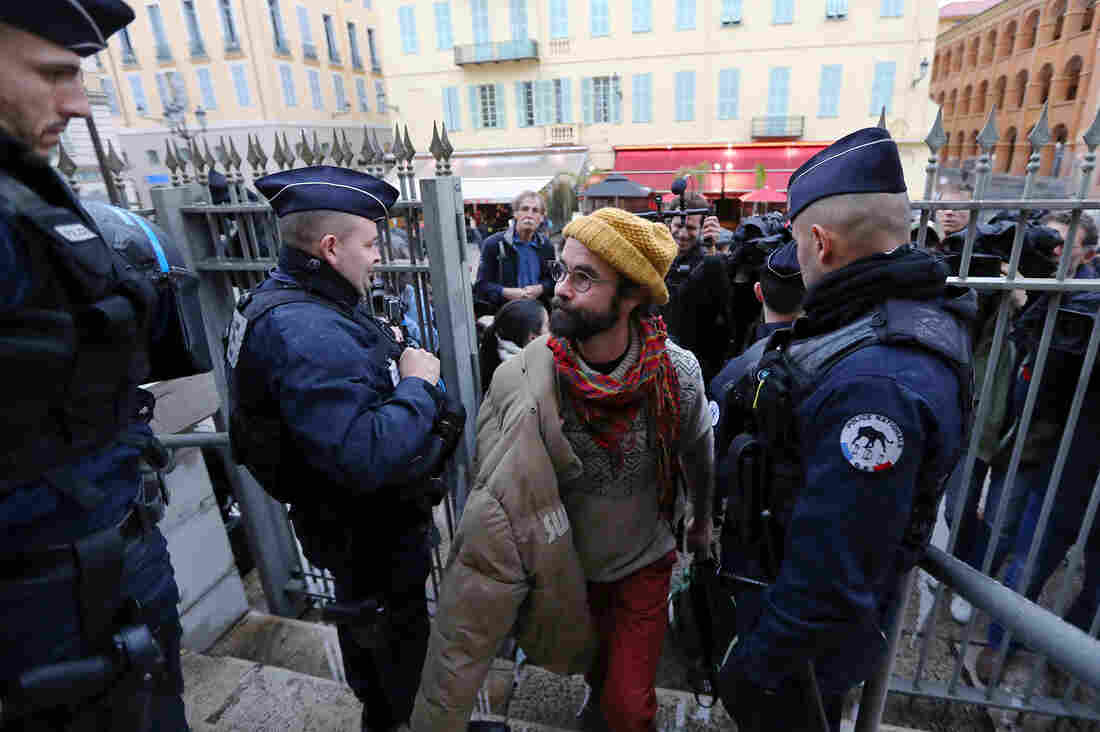 French farmer Cedric Herrou arrives at a court in Nice on Friday for his trial for illegally assisting migrants. Herrou, who helped African migrants to enter the country from Italy, was given a suspended fine of 3,000 euros, about $3,000. Valery Hache/AFP/Getty Images hide caption 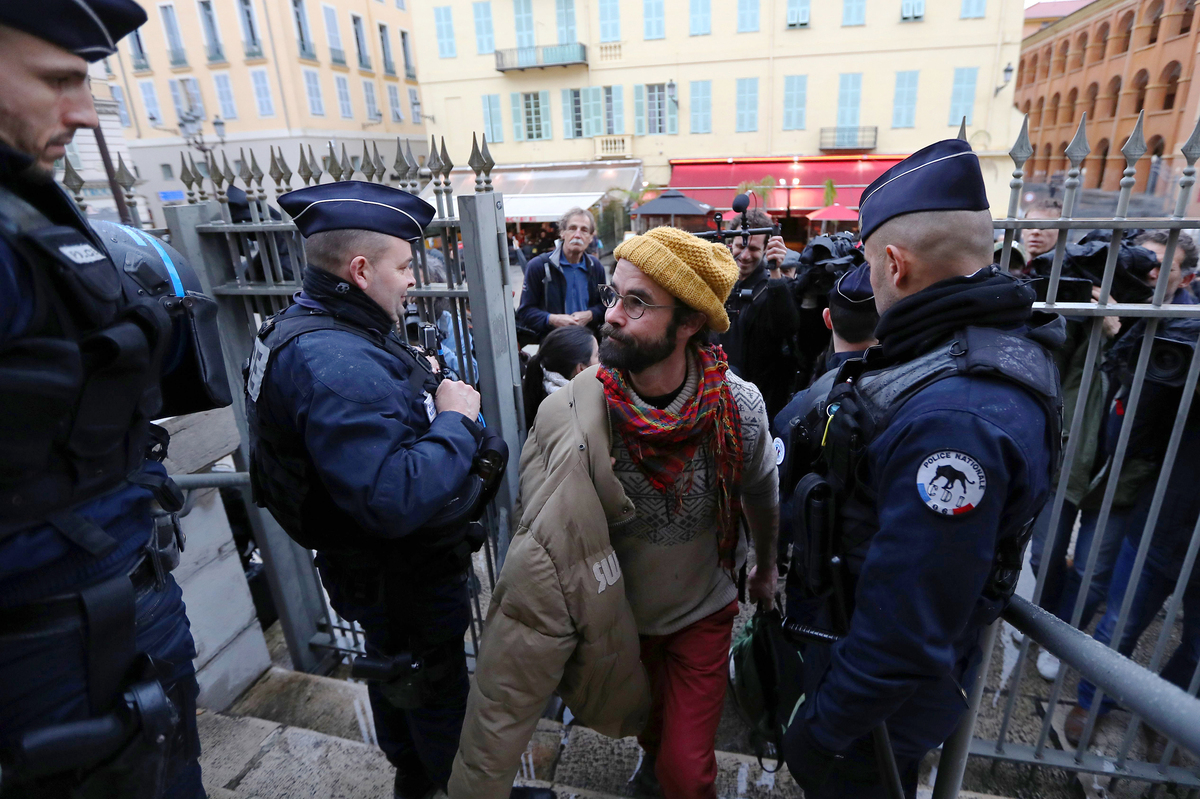 French farmer Cedric Herrou arrives at a court in Nice on Friday for his trial for illegally assisting migrants. Herrou, who helped African migrants to enter the country from Italy, was given a suspended fine of 3,000 euros, about $3,000.

One day last October, Pierre-Alain Mannoni was driving back down to Nice from a village high up in the Mediterranean Alps, when he was flagged down by police at a toll booth. Mannoni was arrested, handcuffed and fingerprinted. He spent 36 hours in jail. His crime? Transporting illegal foreigners in France.

The geography teacher from Nice was bringing two young Eritrean women and a girl to a hospital in Nice when he was arrested. He'd been visiting friends in one of the rugged French villages in the alpine chain that runs between France and Italy, above the Mediterranean Sea. People in these villages have been helping refugees who come over the border from Italy.

The Eritreans "were hurt, they had wounds and they were cold and frightened," says Mannoni. "They had been walking 12 hours and they required some medical attention." Two, he says, were sent back over the border to Italy right away. The third, a minor, was sent to a separate facility. 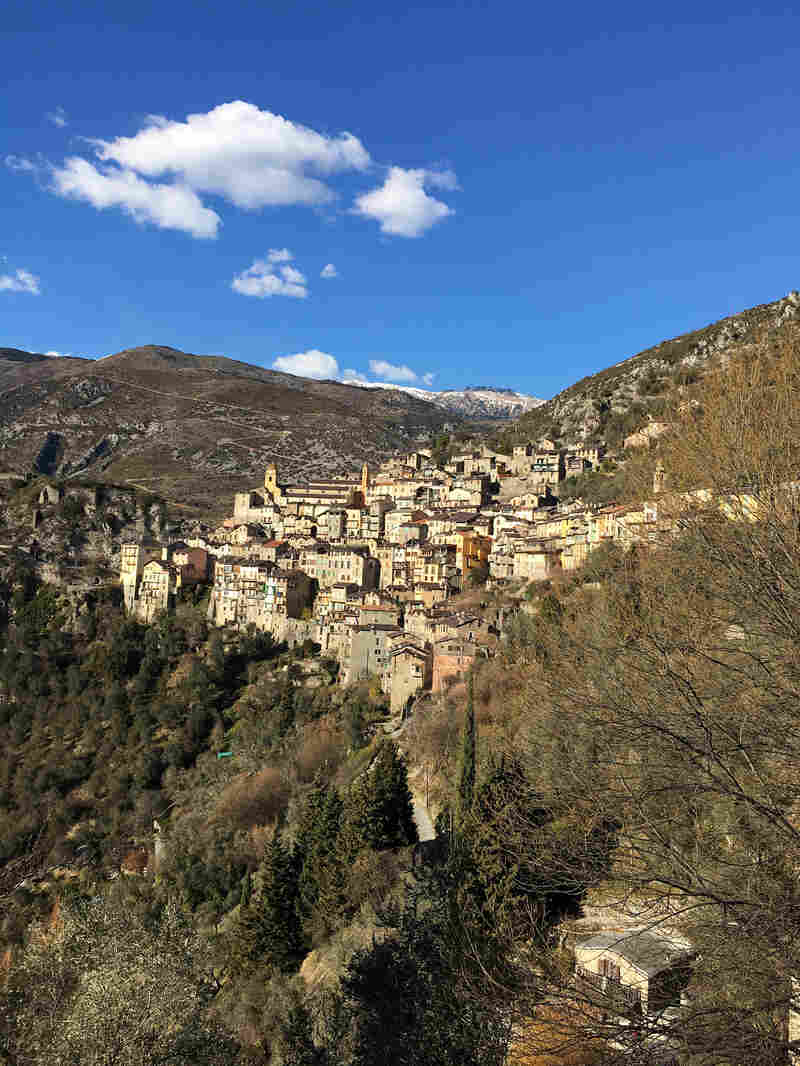 Residents of villages in France's Roya Valley have been helping refugees who come over the border from Italy. Eleanor Beardsley/NPR hide caption 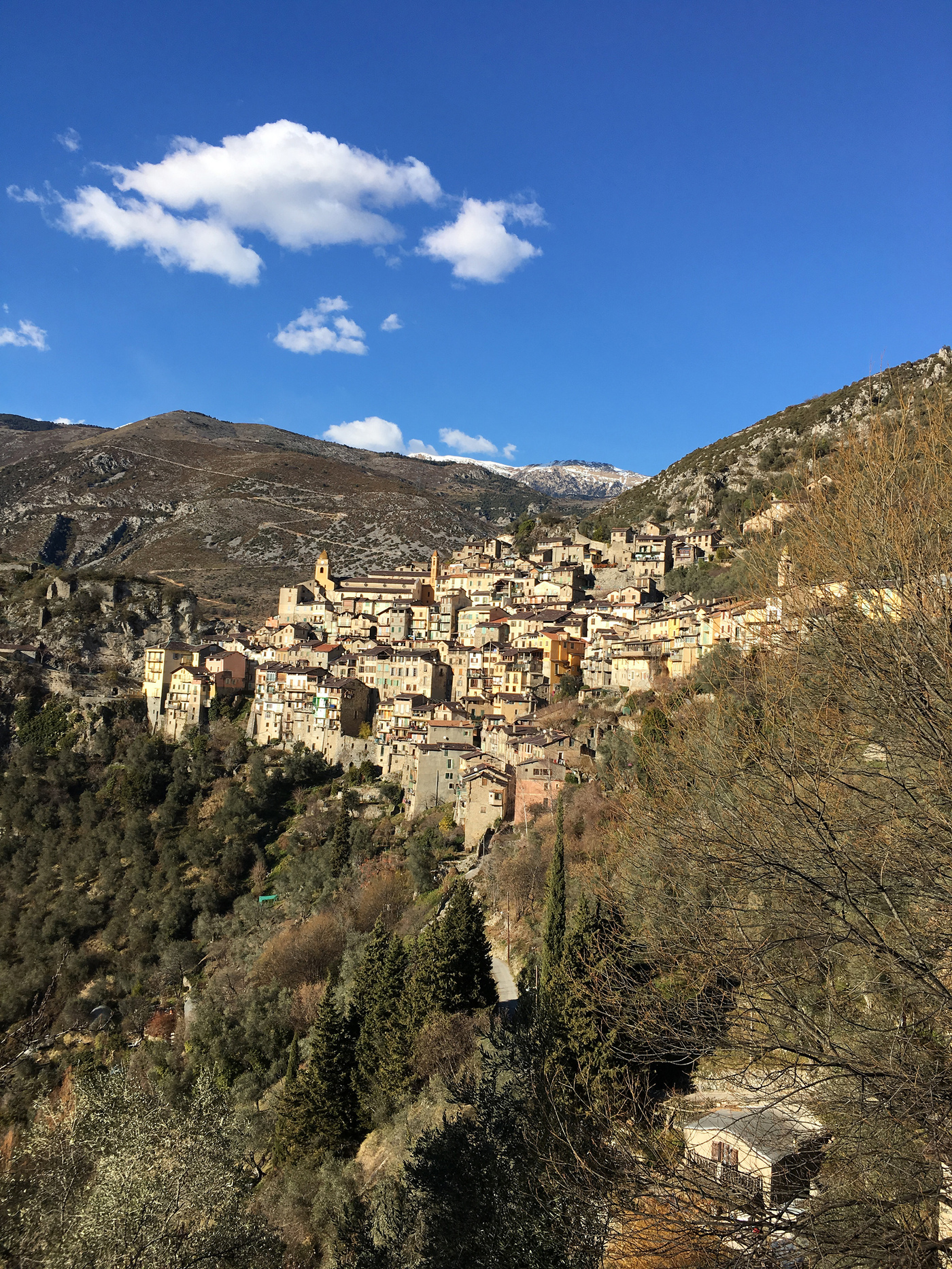 Residents of villages in France's Roya Valley have been helping refugees who come over the border from Italy.

Migrants from the Middle East and Africa continue to arrive in Europe, fleeing wars, dictatorships and famine. But the EU still lacks a cohesive plan to deal with them. Along internal borders, such as between France and Italy, regular citizens like Mannoni are stepping in to help, despite the risk of arrest.

Last month, a judge cleared Mannoni, ruling that what he did was in line with French law and the European Convention on Human Rights. But the Nice prosecutor has appealed that decision.

According to French law, if you help an illegal foreigner out of humanitarian reasons and receive no payment, you can't be charged under laws meant to prosecute traffickers. But Mannoni says these days, the situation is unclear and people like him continue to be arrested for bringing in migrants.

On Friday, a court in Nice convicted Cedric Herrou, a resident of one of the villages that is helping migrants in Provence's Roya Valley. He was given a suspended sentence and a suspended $3,000 fine for illegally helping migrants pass from Italy into France and other European countries.

Saorge is one of the mountain villages where residents have been helping migrants. In the tiny streets, a woman is talking to one of her neighbors. Her first name is Nadia; she doesn't want to use her last name because she fears she could lose her job at the regional tourism office. She says villagers are coming together to do what they can for the migrants arriving from Italy, but the numbers are overwhelming. Thousands try to cross every week.

"It's really more and more difficult to help refugees who pass the border," she says. "We don't want to go to jail. We welcome them and give them food and clothes. But we cannot welcome all the refugees and keep them in our houses!"

Nadia says police are everywhere on the roads around the villages, and they arrest anyone who is black. She says when they find migrants, they immediately send them back to Italy, where the towns near the French border are overwhelmed. 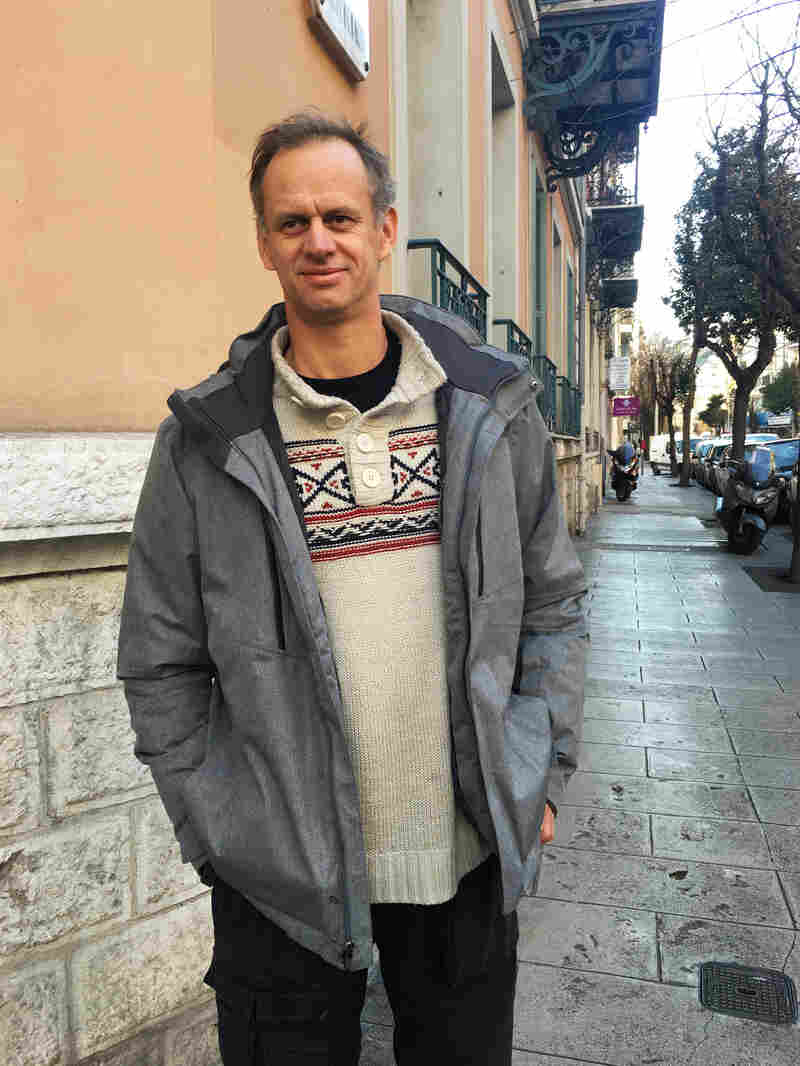 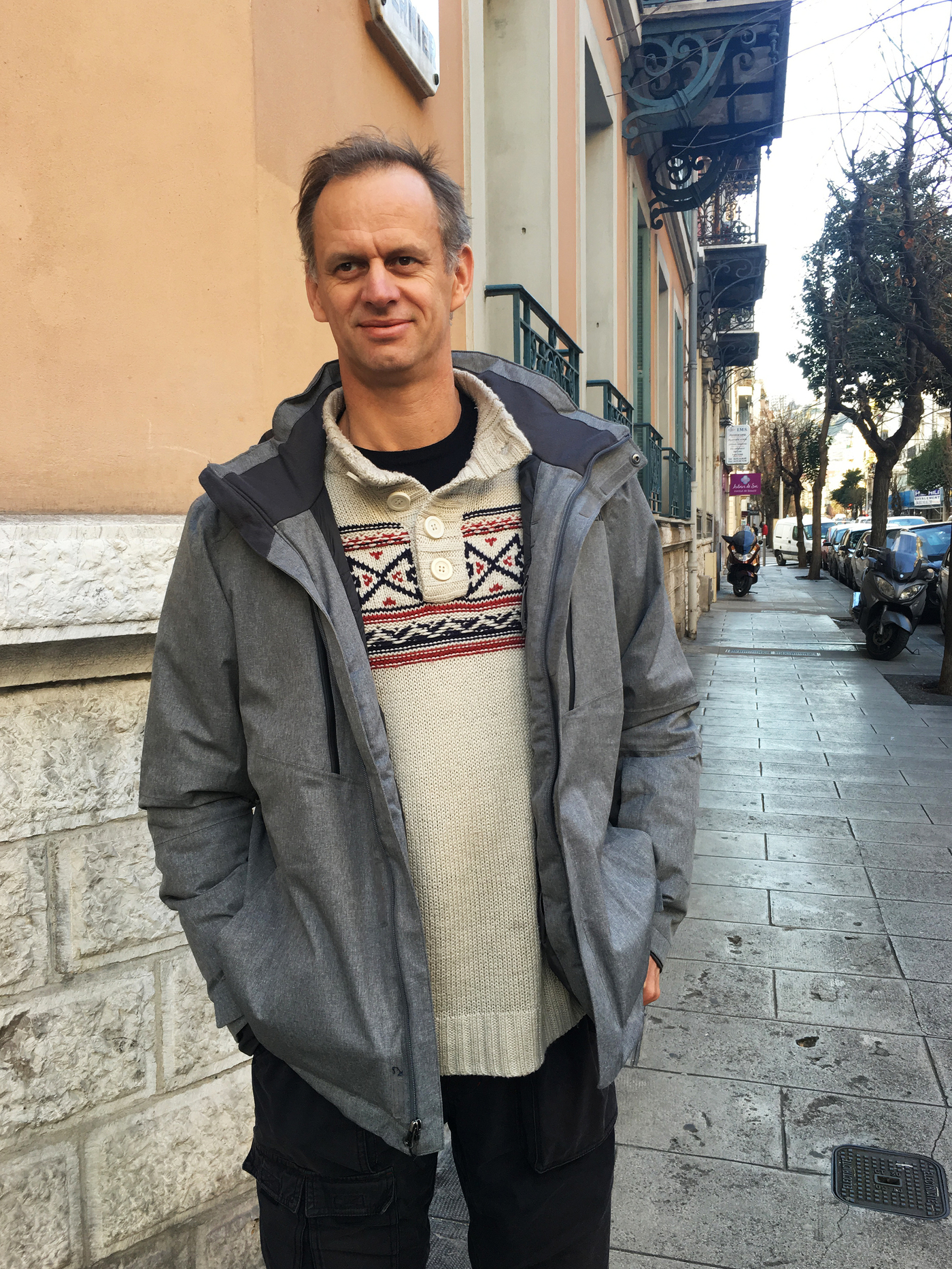 Pierre-Alain Mannoni was arrested for transporting illegal foreigners in France.

"It's completely crazy," she says. "But all the refugees cannot be kept in places like Italy and Greece."

EU law stipulates that under-age refugees traveling without adults must be given special care and can't be sent back, but Nadia says that's not happening here. And she says French leaders and politicians are afraid to tackle the problem, especially in an election year.

It's not the first time people in these picturesque mountain villages have come together in solidarity. During World War II, they hid Jews and resistance fighters. There's a plaque in one village square honoring the memory of those deported to Nazi death camps.

A delicious smell floats out of one house in Saorge, where a small group of people has been chattering away and cooking all day. They're preparing meals to take to Ventimiglia, the last town in Italy before the border.

Migrants camp there waiting for their chance to pass into France and beyond. But an ordinance in Ventimiglia has made it illegal for residents to give them food. One of the French cooks, Bernard Duchatelle, says with the way migrants are being treated, the only option is civil disobedience.

"You see young people, sometimes teenagers, they're alone, totally helpless, no money, it's cold, and what are you going to do, nothing?" he asks. "I really believe that as a citizen, if you believe your government does not show morality, then you have to go against your government."

It's a freezing cold night by the time Duchatelle and his friends are handing out their meals in a church parking lot in Ventimiglia. Shivering young men are huddled around to take the food. One of them, Fathi Anchoumana, 28 and from Gambia, is just trying to get out of Italy.

He shows a train ticket to Nice he has purchased. But he says police keep stopping him at the border and sending him back.

"They keep telling me I need travel papers. But of course I don't have any," says Anchoumana. "So I am stuck here. I have goals and talent. I want to make something of my life. But I cannot get out of here."