Accessibility links
Indian IT Outsourcers Anxious Over Potential Changes To H-1B Visas : Parallels President Trump vows to "protect jobs at home." Indian firms say that if there were qualified Americans, Indian nationals wouldn't be needed — that it's a trade dispute, not an immigration issue. 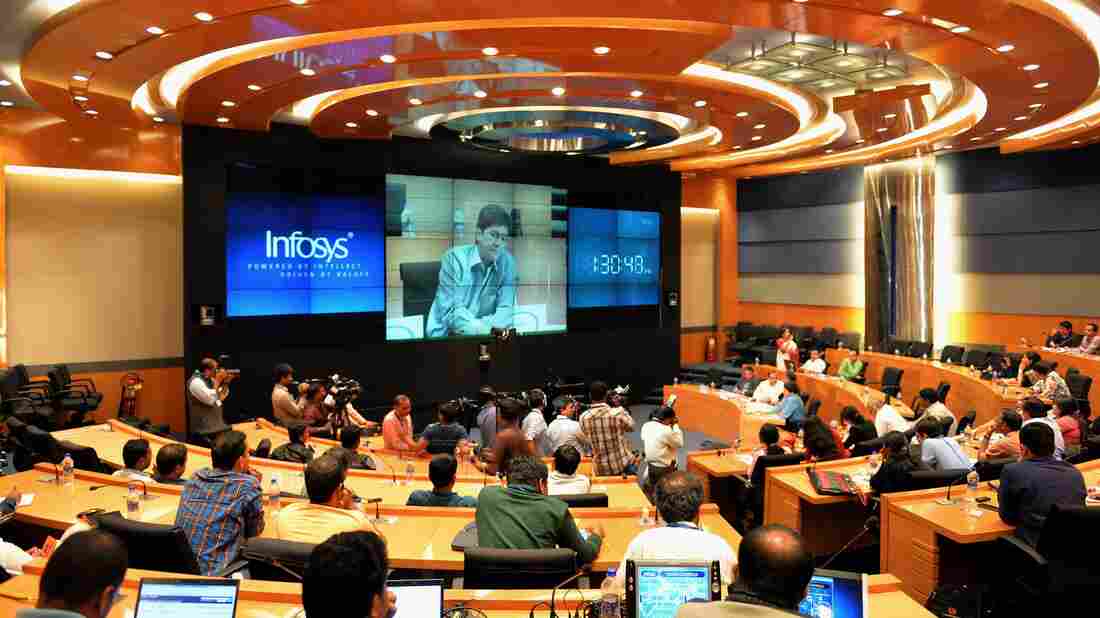 Members of the Indian media watch Rajiv Bansal, then the CFO of Infosys, during the announcement of the company's first quarter results in July 2014 in Bangalore. Indian software services firms draw tens of billions of dollars in revenue from U.S. contracts each year, and that's partly reliant exporting computer science talent on H-1B visas. Manjunath Kiran/AFP/Getty Images hide caption 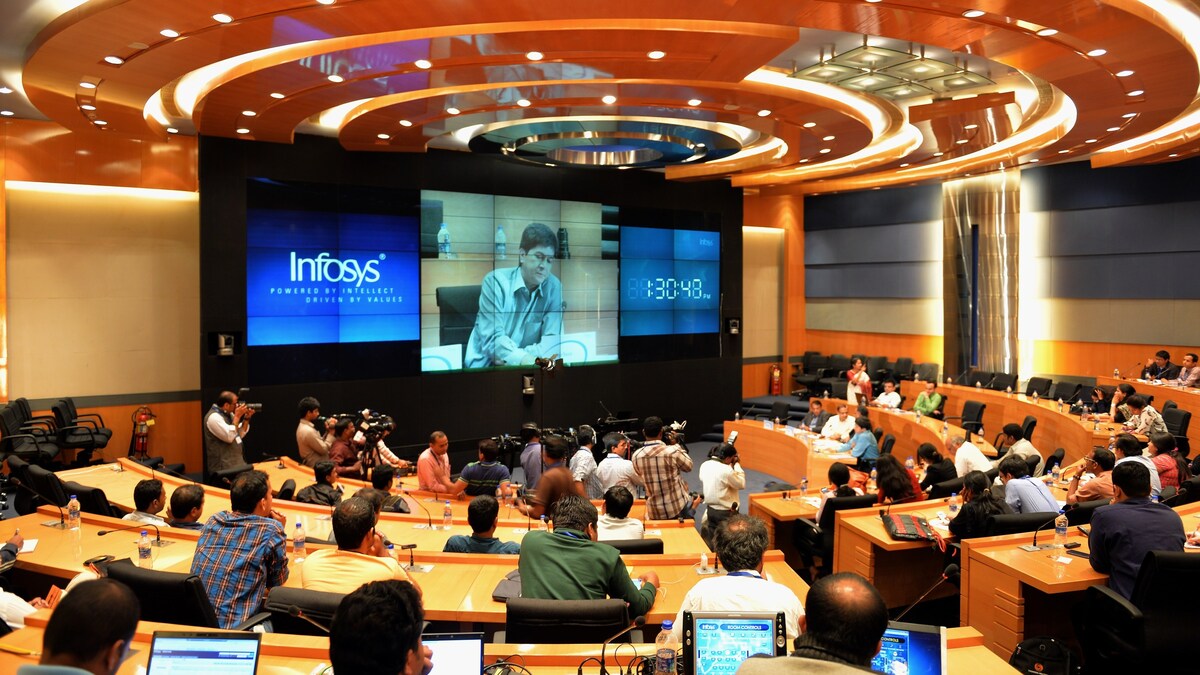 Members of the Indian media watch Rajiv Bansal, then the CFO of Infosys, during the announcement of the company's first quarter results in July 2014 in Bangalore. Indian software services firms draw tens of billions of dollars in revenue from U.S. contracts each year, and that's partly reliant exporting computer science talent on H-1B visas.

With the Trump administration vowing to tighten rules for skilled workers entering the United States, India's software services companies are worried. Indian IT giants outsource tens of thousands of tech specialists to the United States each year, and limiting the visa program that brings them in could disrupt their multibillion-dollar industry.

Congress and the White House have targeted what is arguably the most coveted of U.S. visas: the H-1B. It's "a kind of temporary work visa that allows professionals from other countries to work in the United States for a designated U.S. employer," explains Stephen Yale-Loehr, a Cornell University immigration law professor.

Yale-Loehr says that with the economy strengthening, the program is in particularly big demand. Last year, U.S. companies that sought to bring highly skilled workers to the U.S. filed 236,000 petitions that went into a lottery for just 85,000 H-1B visas, the legal cap. The bulk of the winners: Indian computer specialists, many of them graduates of U.S. universities.

Yale-Loehr says that places like Europe and Australia have special visas to attract such talent, but that the United States doesn't.

"We have to shoehorn high-tech workers into categories like the H-1B, and it's getting more difficult every year," he says.

For many H-1B holders, the temporary work visa — issued for a maximum of six years — has been a stepping stone to obtaining a green card. That grants permanent residence in the U.S., and in turn provides a path to citizenship.

But newly introduced legislation in Congress and drafts of executive orders reportedly circulating in the Trump White House could limit the H-1B program.

Executives from the software services firms will travel to Washington this month to lobby against measures that threaten one of India's most successful industries — which last year earned 60 percent of its $108 billion in export revenues from the U.S.

The current law makes a crucial distinction: When an employer has more than a certain number of H-1B workers to U.S. workers, it is considered "dependent" on H-1B employees.

Dependent employers must assume additional administrative burdens, which include recruitment of U.S. workers. However, if an H-1B worker who possesses a master's degree or higher is hired, or if an H-1B worker is paid at least $60,000, the employer is exempt from additional verifications.

That would change under a new bill introduced by U.S. Rep. Zoe Lofgren, a California Democrat. Her bill seeks to eliminate the master's degree as a basis for exemption and to more than double the current minimum wage level for exemption to $132,000. There's strong opposition to Lofgren's bill in India, where analysts say it would harm the country's IT industry.

Critics of the current law argue the H-1B has been misused to displace American workers, and that there has been an incentive to prefer Indian IT workers because they are cheaper.

Talent has become more important than investment or trade. ... Those who consciously cut themselves off from the global supply chains of talent are depriving themselves of a good thing.

Shailesh Chitnis, with the data mining and analysis company Compile, says that while the median salary for all H-1B holders is $71,000, most but not all Indian outsourcers pay below that. If they had to double salaries, Chitnis says, Indian IT companies would have to change their 20-year-old business model.

"Because these organizations are not going to be bringing in people at $120,000 to fill those jobs — it would simply be too expensive," he says. "They'll have to look at some other alternatives."

But Shevendra Singh with India's National Association of Software Services Companies, or NASSCOM, refutes allegations that Indian companies are dislocating American workers or supplying low-paid labor. Singh says there is demand in the U.S. for Indian technical talent because of a severe shortage of qualified Americans with degrees in science, technology, engineering and math.

"The crux of the issue is the STEM skill shortage in the U.S.," Singh says.

In its 2012 report, the U.S. president's Council of Advisors on Science and Technology found that "fewer than 40-percent of students who enter college intending to major in a STEM field complete a STEM degree." The council concluded that by 2022, economic forecasts suggested a need to produce "approximately 1 million more college graduates in STEM fields than expected under current assumptions."

R. Chandrashekhar, president of NASSCOM, says that if the skills aren't available in the U.S. — and companies can't bring workers in — the jobs either won't get done or they will go out of the country and be done remotely.

"Talent has become more important than investment or trade," he says. "And those who consciously cut themselves off from the global supply chains of talent are depriving themselves of a good thing."

Chandrashekhar notes that the intermingling of American and Indian ingenuity helped build Silicon Valley, and says protectionist impulses could weaken the United States, and what makes it unique.

"America is No. 1," Chandrashekhar says. "What has really helped them to rise, absolutely, to the top, is that they have attracted talent from across the world. ... It would be really a pity if that was reversed without thinking it through."

Immigration expert Yale-Loehr, co-author of a 21-volume treatise on immigration law, agrees that the United States faces a crisis in maintaining its innovative and competitive edge, and says it should be inviting more, not less, IT talent to its shores.

"In a globalized economy, the best and the brightest want to work in the best places — and if they're unable work in the United States, or it takes too long or is too difficult, they'll find a place in Canada or Europe or India where their talents can be appreciated," he says.

If implemented, Yale-Loehr says the draft executive order would initiate a review of the H-1B program but likely have no direct, immediate impact.

However, he says "it sends a strong signal that we no longer like foreign workers — we're all about only U.S. workers.

"That is eventually going to hurt us."

This story has been updated to add details about the current law and the proposed changes.