Accessibility links
Nearing 93, Robert Mugabe Shows No Sign Of Stepping Down : Parallels The world's oldest leader, Zimbabwe's Robert Mugabe, turns 93 Tuesday. He has no intention of retiring and his wife has said even if he dies before next year's election, he should run "as a corpse." 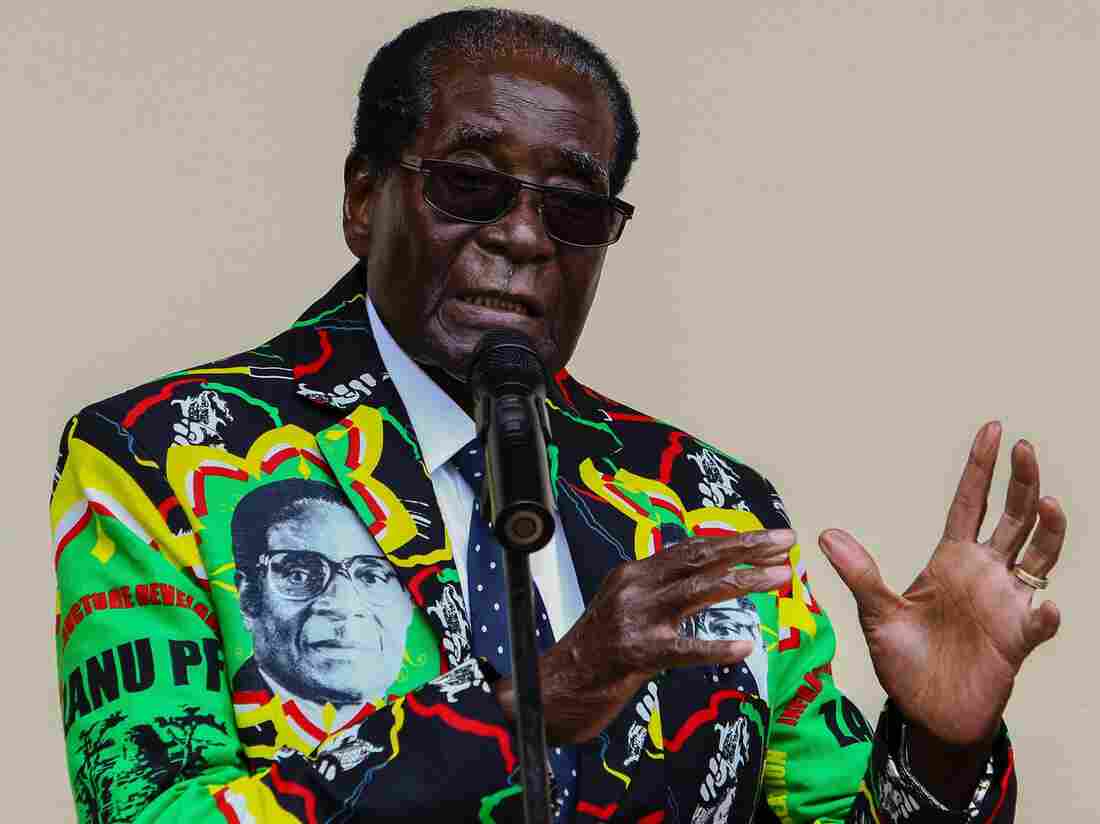 Zimbabwe's President Robert Mugabe, who turns 93 on Tuesday, speaks at his party's annual conference in December, where he was endorsed as a candidate for the 2018 election. His wife said last week that even if he dies before the election, he should run "as a corpse." Jekesai Njikizana/AFP/Getty Images hide caption 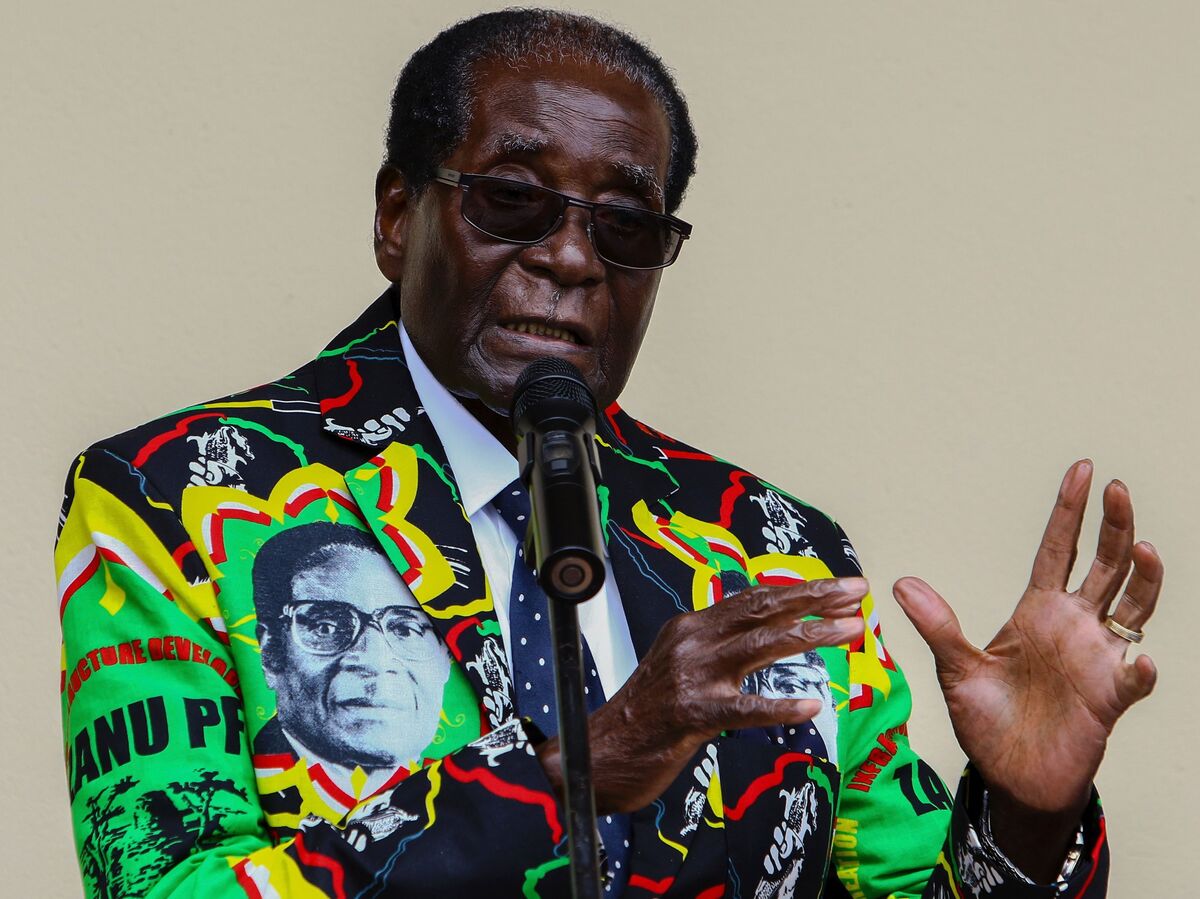 Zimbabwe's President Robert Mugabe, who turns 93 on Tuesday, speaks at his party's annual conference in December, where he was endorsed as a candidate for the 2018 election. His wife said last week that even if he dies before the election, he should run "as a corpse."

President Robert Mugabe turns 93 on Tuesday, making him the oldest president in Africa — and the world. He's the only leader most Zimbabweans have ever known, spending nearly 37 years at the helm since independence from Britain and the end of white minority rule in Rhodesia in April 1980.

Mugabe is blamed by his critics, including the United States, for mismanaging the economy and making a once-prosperous southern African country poor. But his supporters in and out of Zimbabwe see him as an African nationalist who championed the cause of the continent and helped fight apartheid in neighboring South Africa as one of the leaders of the frontline states.

The nonagenarian has been endorsed by his governing Zanu-PF party as its candidate for elections next year, when he'll be 94. Last Friday, his wife Grace, who's 51, told thousands of cheering supporters at a political rally in eastern Zimbabwe that even if her husband dies before the vote, he should still run and would win.

"If God decides to take him," the first lady said in the local Shona language, "then we would rather field him as a corpse."

Grace Mugabe also took a swipe at old-timers in the party who fought Zimbabwe's guerrilla war of independence, whom she accuses of trying to wrest power from her husband.

"Anyone who was with Mugabe in 1980 has no right to tell him he is old. If you want Mugabe to go, then you leave together," she said. "You also have to leave. Then we take over, because we were not there in 1980," she added, pointing to herself.

That has set tongues wagging again that Grace Mugabe is very much part of the succession battle raging within Zanu-PF — and that she's positioning herself politically within the party to try to take over from her husband.

That's highly unlikely, says political commentator Pedzisai Ruhanya of the Zimbabwe Democracy Institute. He tells NPR he believes the armed forces will decide who takes over from Mugabe, when the time comes. The military, which has its own wing of the party, will designate Mugabe's successor and is likely to choose a candidate with credentials from the liberation struggle, Ruhanya says.

The U.S. Dollar Is Zimbabwe's Main Currency, And It's Disappearing Fast

Still, speculation about the succession is a burning issue in Zimbabwe. Mugabe, a political survivor who has always out-foxed any potential rivals, has accused fellow governing party members of plotting his ouster and told them at a December party congress to rein in what he called their "unbridled ambition."

He grumbled that "some are busy plotting succession in the party. They say: 'When will this old man die? He is refusing to die.' "

In excerpts of Mugabe's traditional annual birthday interview, published Sunday, Mugabe was quoted as saying he wasn't ready to step aside. He has declared in the past that he would like to live until he's 100 and rule for life.

He says he's not grooming anyone to replace him. "A successor is groomed by the people. The majority of the people feel that there is no replacement; a successor who to them is acceptable, as acceptable as I am," Mugabe is quoted as saying in the state-run Sunday Mail.

While Mugabe was on his annual extended holiday in December and January, a tussle ballooned on social media — an indication of the hype, buzz and concern surrounding the succession issue. Festive season photos circulating showed Vice President Emmerson Mnangagwa, an independence war veteran who served as acting president during Mugabe's absence, posing with a huge mug bearing the message, "I'm the boss."

Another minister, Jonathan Moyo, decried what he called a "power-grab narrative" by Mnangagwa and tweeted, "One Boss at a time, please."

Supa Mandiwanzira, a government minister, Zanu-PF central committee member and Mugabe supporter, says the president is their leader — and that's that.

"We have no problem with him. President Mugabe says, 'I'm still here, so my position is not up for grabs. I've a mandate, allow me to serve my term, if you're also interested — number one. Number two — don't jostle for power,' " Mandiwanzira says. "We have more important things to do, to address the concerns of the people, to deliver on the expectations of voters. Those are things we should focus on: addressing our economic challenges."

But Ruhanya, the political analyst, emphasizes that Mugabe is an aging president with health problems and Zimbabweans can't help but ponder a future without him.

"Given the president's age, any reasonable person would see that, at 92, turning 93, the future of the president is in the cemetery. So it is at that age, and his loss of grip — not by anyone's willing, but by the will of God — a time when they fizzle out, when they naturally can leave this world."

Others believe Mugabe's wife's assessment might be closer to the mark. The first lady has said that if necessary, "I will push President Mugabe in a wheelbarrow or a wheelchair to bring him to work."

Even as he grapples with the factions within his party, Mugabe has many other problems. For years, Zimbabwe has been an international pariah because of his human rights record and allegations of state-sponsored violence against his opponents. The U.S. and other powers slapped targeted sanctions on Mugabe and his inner circle, sanctions the Zimbabwean government repeatedly blames for the terrible state of the economy.

Pro-democracy campaigners took to the streets last year, inspired by an anti-Mugabe hashtag campaign called #ThisFlag and demanding "Mugabe must go." Among his failures, said the demonstrators, were his mishandling of the economy, a dire shortage of U.S. dollars, the main currency used in Zimbabwe, and the $800,000 reportedly spent on his lavish 92nd birthday celebrations, when giant cakes were served in a drought-stricken area suffering food shortages.

A year on, Mugabe supporters are poised to celebrate his 93rd birthday with another official party planned for thousands of people on Saturday in Matabeleland in the south.

Matabeleland was the scene of the 1983 Gukurahundi massacres of the Ndebele people, shortly after independence, when Mugabe's North Korean-trained troops cracked down on alleged dissidence from a minority tribe. An estimated 20,000 people were killed or starved to death in the campaign.

Mugabe is still haunted by the Gukurahundi legacy, an economy in free-fall and his controversial land reform policy that led to often-violent invasions of mostly commercial white-owned farms and saw white farmers and many black farm workers driven off their land. The economy collapsed and Zimbabwe, once the breadbasket of southern Africa, had to import food.

Critics say Mugabe's plan to deliver land and farms to black people fell far short of expectations and only members of Zimbabwe's elite have truly benefited.

"People are aware of the big prize that we have gotten from President Mugabe and the Zanu-PF leadership, which is independence, economic empowerment, independence of the brain — liberate yourselves mentally — and the right to own your own resources in your own country," Mandiwanzira tells NPR. "All these benefits cannot be wiped away because there's no cooking oil in the home at the moment. No, I think Zimbabweans are smarter than that, to know these things."