Accessibility links
Deported With A Valid U.S. Visa, Jordanian Says Message Is 'You're Not Welcome' : Parallels He landed in Chicago for a graduation celebration trip after President Trump's travel ban took effect on citizens of seven mostly Muslim countries. He was held overnight in a cell and then sent back. 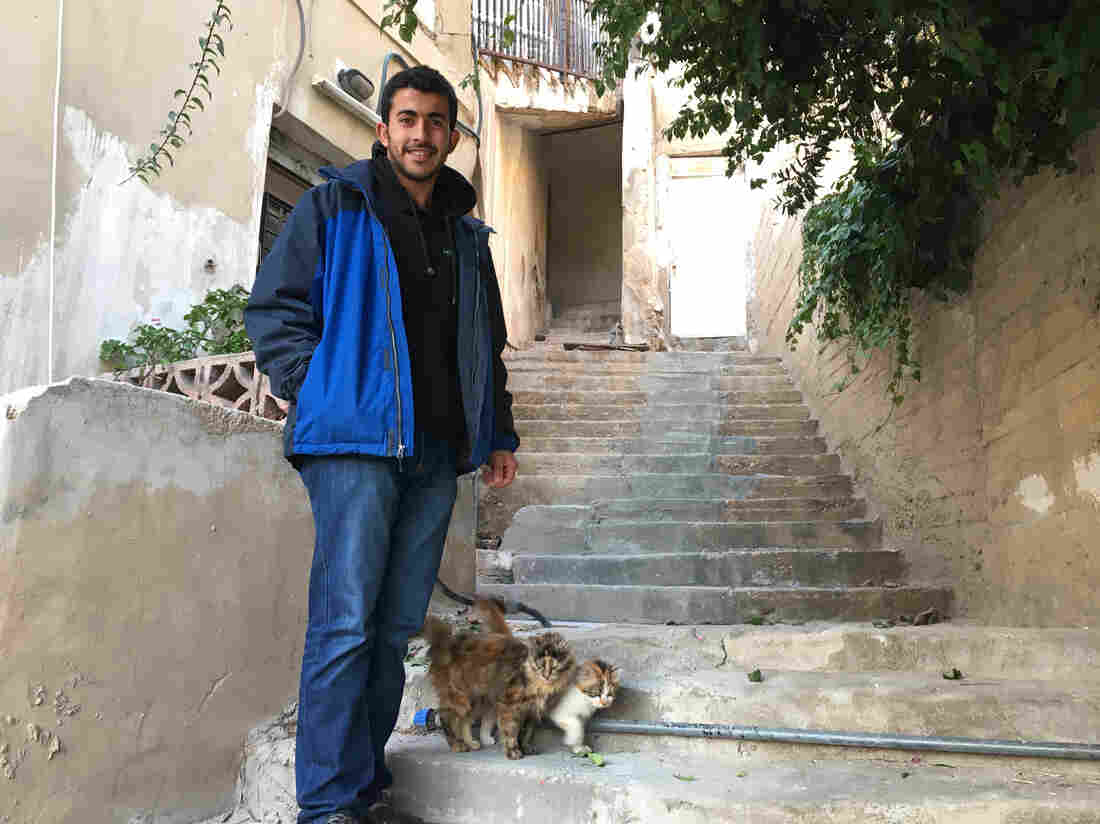 Yahya Abu Romman stands outside his family's home in downtown Amman. The 22-year-old was deported from the U.S. after landing in Chicago at the end of January with a valid visa. He says border officers questioned why he holds a Jordanian passport when he was born in Syria. Jane Arraf/NPR hide caption 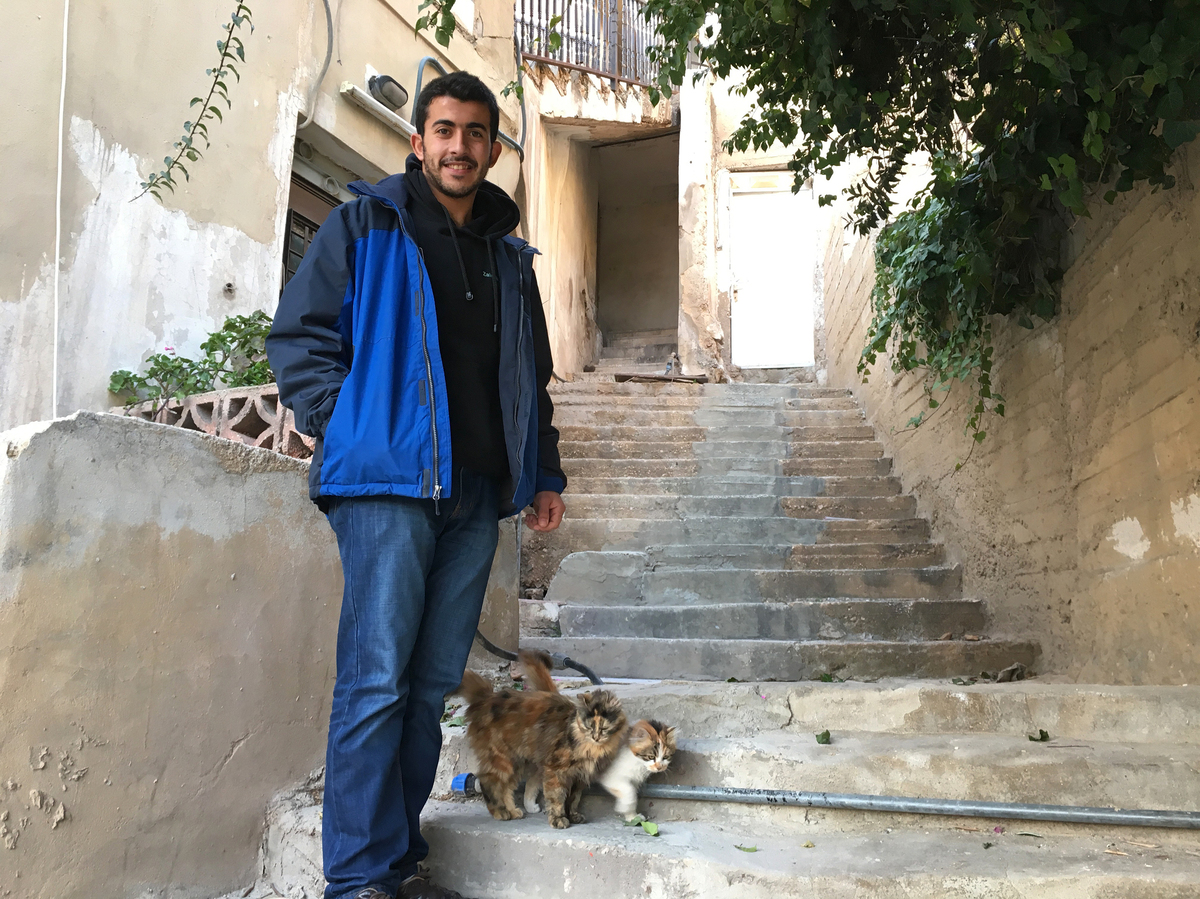 Yahya Abu Romman stands outside his family's home in downtown Amman. The 22-year-old was deported from the U.S. after landing in Chicago at the end of January with a valid visa. He says border officers questioned why he holds a Jordanian passport when he was born in Syria.

Yahya Abu Romman, a 22-year-old languages major, had just graduated from university. To celebrate, he planned a six-week trip to the U.S., where his brother, uncles and aunts and more than a dozen cousins have lived for years.

With good grades, an engaging personality and fluency in three languages — English, Arabic and Spanish — he had worked as a nature conservation ranger while studying, and had his pick of jobs with tour companies in Jordan, a strong U.S. ally.

In 2015, Abu Romman was issued a tourist visa at the U.S. embassy in Amman, good for five years. With money from a graduation present, he bought a round-trip ticket and landed at Chicago's O'Hare International Airport a few days after the start of President Trump's travel ban on the citizens of seven predominantly Muslim countries.

That's where the positive impression of the U.S. he'd inherited from his father came to a screeching halt.

"My dad is a graduate from the University of Illinois," says Abu Romman. "He always told me America is the land of justice, land of opportunities, of generosity. That there are very kind people. And there are. But I think things have changed."

Abu Romman is a Jordanian citizen, but born in Syria. He's been to Syria only once since birth — and being born in an Arab country doesn't automatically confer citizenship there. Instead, citizenship is generally based your father's nationality. Still, Abu Romman couldn't persuade the border officer at O'Hare that he wasn't Syrian.

"He said, 'Sir, if you were born in Syria, you should have a Syrian passport,' " says Abu Romman at his family's home off a winding street in the Jordanian capital. "I said, 'Why should I have a Syrian passport? My father is Jordanian. My mother is Jordanian. We all are Jordanian, but it happened to be in Syria where I was born.' He knocked on the glass next to him, to his colleague. He said, 'We might have a problem with this."

Abu Romman says his dream was to learn to fly, and he was simply asking about scholarships. But the officer wasn't convinced that he wasn't planning to stay in the U.S.

"He said, 'Sir, we're going to be cancelling your visa,'" says Abu Romman.

He shows me his U.S. visa with the words "Revoked – cancelled by CBP" – Customs and Border Protection — written across it with a red marker. 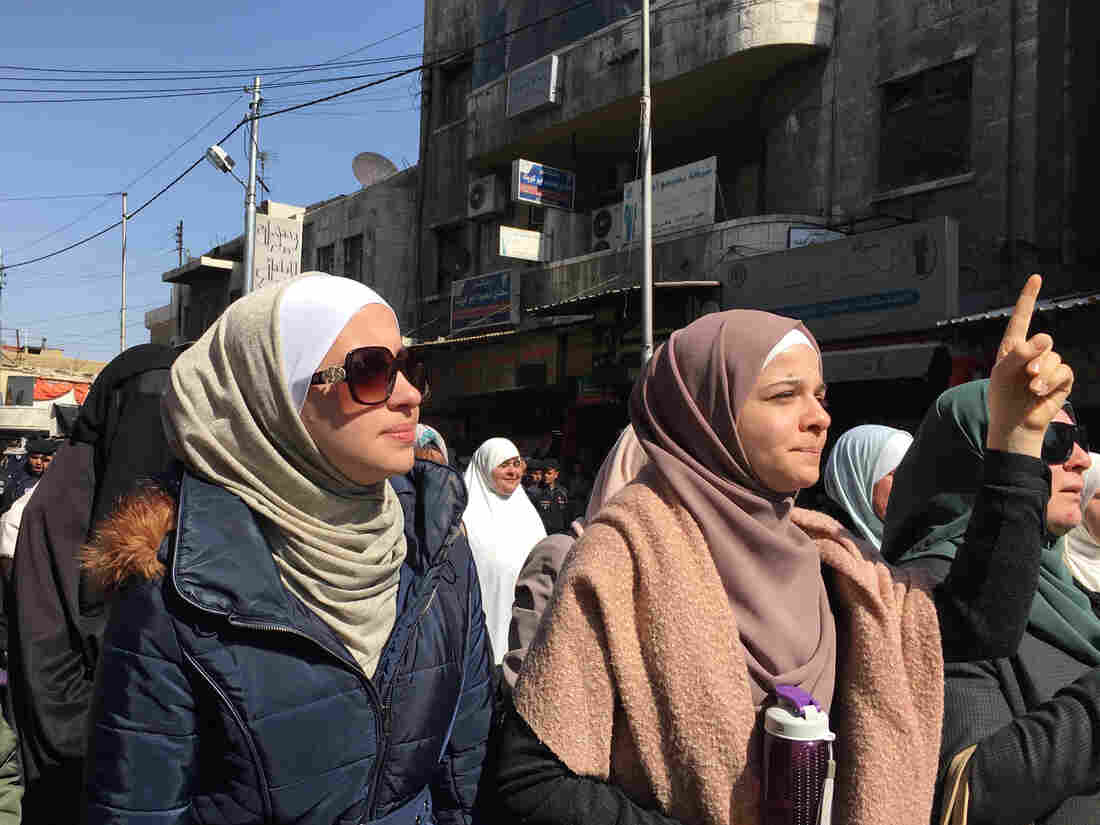 Zina Khabbas (left), a Jordanian engineering graduate who says she wants to leave the country but has no interest in going to the United States. Khabbas was at a demonstration Friday protesting rising prices of fuel and government services. Jane Arraf/NPR hide caption 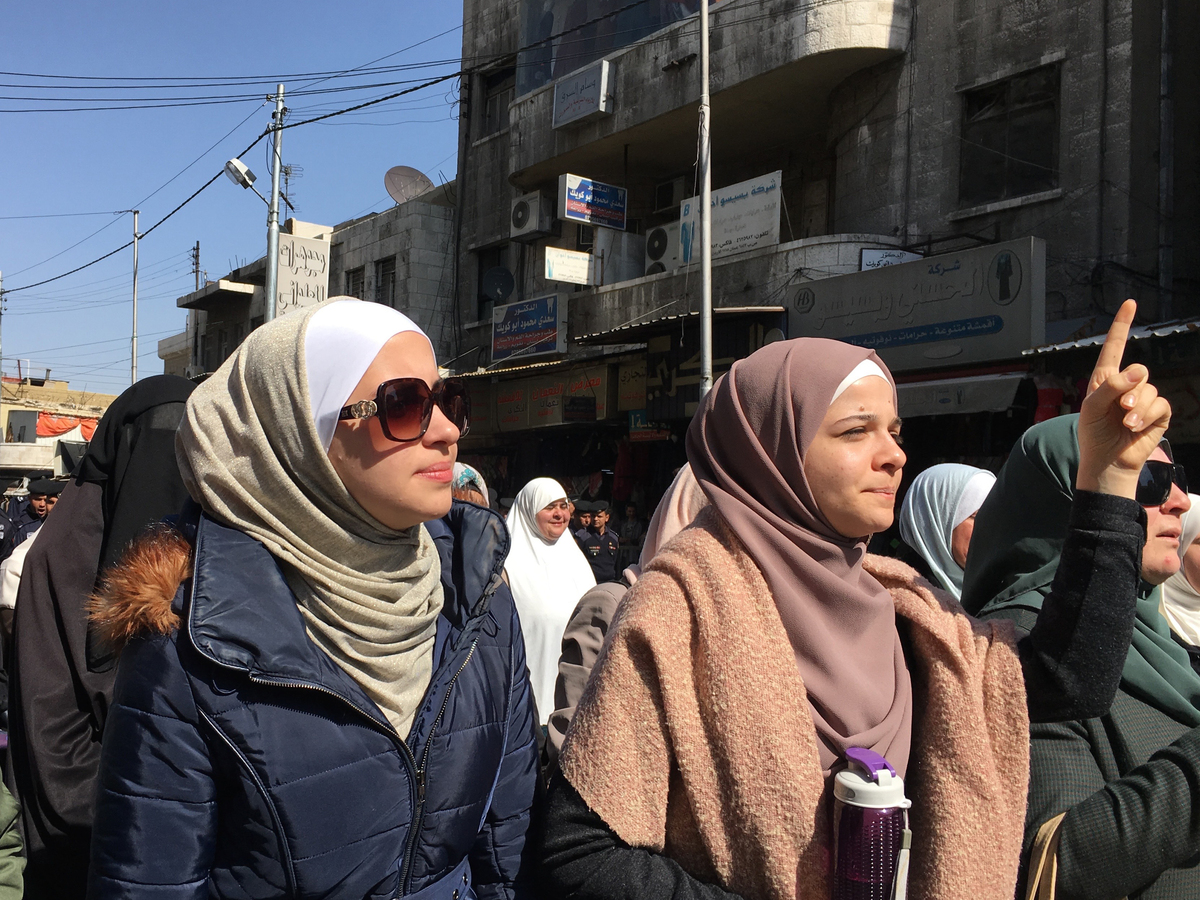 Zina Khabbas (left), a Jordanian engineering graduate who says she wants to leave the country but has no interest in going to the United States. Khabbas was at a demonstration Friday protesting rising prices of fuel and government services.

Abu Romman says the officer told him he would not be allowed to call his embassy before he signed papers agreeing to be deported. He says he wasn't allowed to phone a lawyer or a family member.

"He said, 'If you refuse to sign the papers ... I will ban you from entering the United States for the rest of your life,'" Abu Romman says.

He was told he would be deported the following morning.

CBP officers took his jacket, his belt, his phone and his shoelaces, he says, and put him in a cold cell with a steel door and open toilet, along with five other people.

"I sat there and introduced myself to my cellmates. Most of them were engineers or something," Abu Romman says.

There were five mattresses on the floor for six people. Abu Romman says everyone crammed into the cell had advanced degrees, including an Indian engineer working for an American company.

Refugee and immigrants' rights organizations have gone to court over the issue of other travelers who were earlier denied entry to the U.S. after the ban. The case argues that the travelers were coerced by border officials into agreeing to be deported. This is similar to Abu Romman's account of his experience at O'Hare, though he is not represented in the case.

As of Friday afternoon, CBP had yet to comment in response to NPR requests about Abu Romman's experience.

Abu Romman had visited the United States once before, when he was in the sixth grade, and has wonderful memories of that trip.

"They were so welcoming – 'Come to us. See our beautiful land,'" he says. "Now they're telling you not to come, please. 'You're not welcome.'"

He's been told by the U.S. embassy in Jordan he can apply again for a visa, but probably shouldn't do it right way. Abu Romman says he probably will, but it's been a painful lesson. He seems genuinely puzzled by the assumption by border officers that he might try to stay in the U.S.

"I'm a lot safer in Jordan," he says. "You hear about people being robbed and killed [in the U.S.] all the time. My relatives say sometimes even in gas stations, there are bullet-proof windows between people working there and the customer. You never have to worry about that here."

Most Jordanians say their biggest problems are economic. At a demonstration Friday in downtown Amman to protest price increases in fuel and public services, another recent graduate, Zina Khabbas, said she was thinking of moving to the Gulf.

Khabbas, wearing designer sunglasses and an elegant head scarf woven with gold threads, is an engineer. She says it's tough to make ends meet in Jordan, but neither she nor her friends are considering the U.S.

"America was an opportunity for people here before," says the 22-year-old. "But now, no one is actually thinking about the United States for a future place to live."