Accessibility links
A Foreign Businessman's Murder Pauses Philippine Drug War, But For How Long? : Parallels President Rodrigo Duterte's war on drugs has led to 7,500 deaths. But after a Korean businessman was killed, Duterte ordered the national police to stand down from their leading role in the drug war. 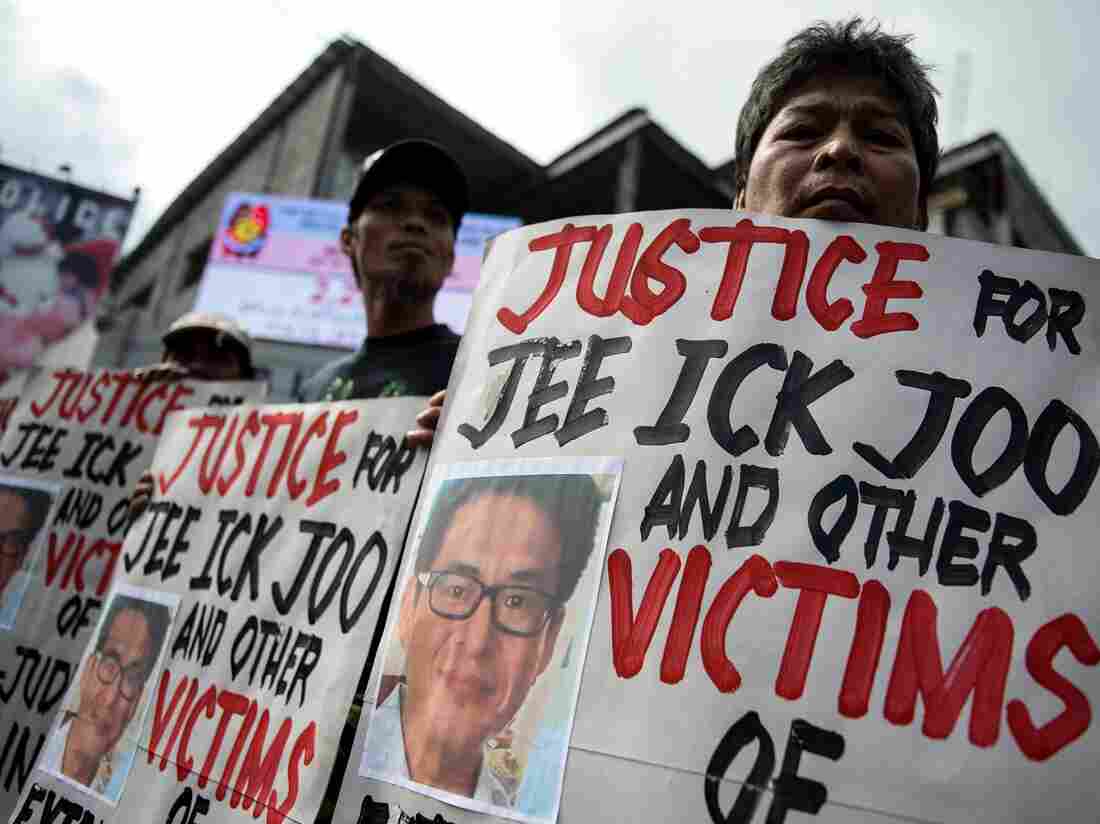 Activists protest at the headquarters of the Philippine National Police, condemning the government's war on drugs and holding placards showing murdered South Korean businessman Jee Ick-joo. The South Korean businessman was allegedly kidnapped by Philippine policemen under the guise of a raid on illegal drugs and murdered at the national police headquarters in Manila, authorities said. Noel Celis/AFP/Getty Images hide caption 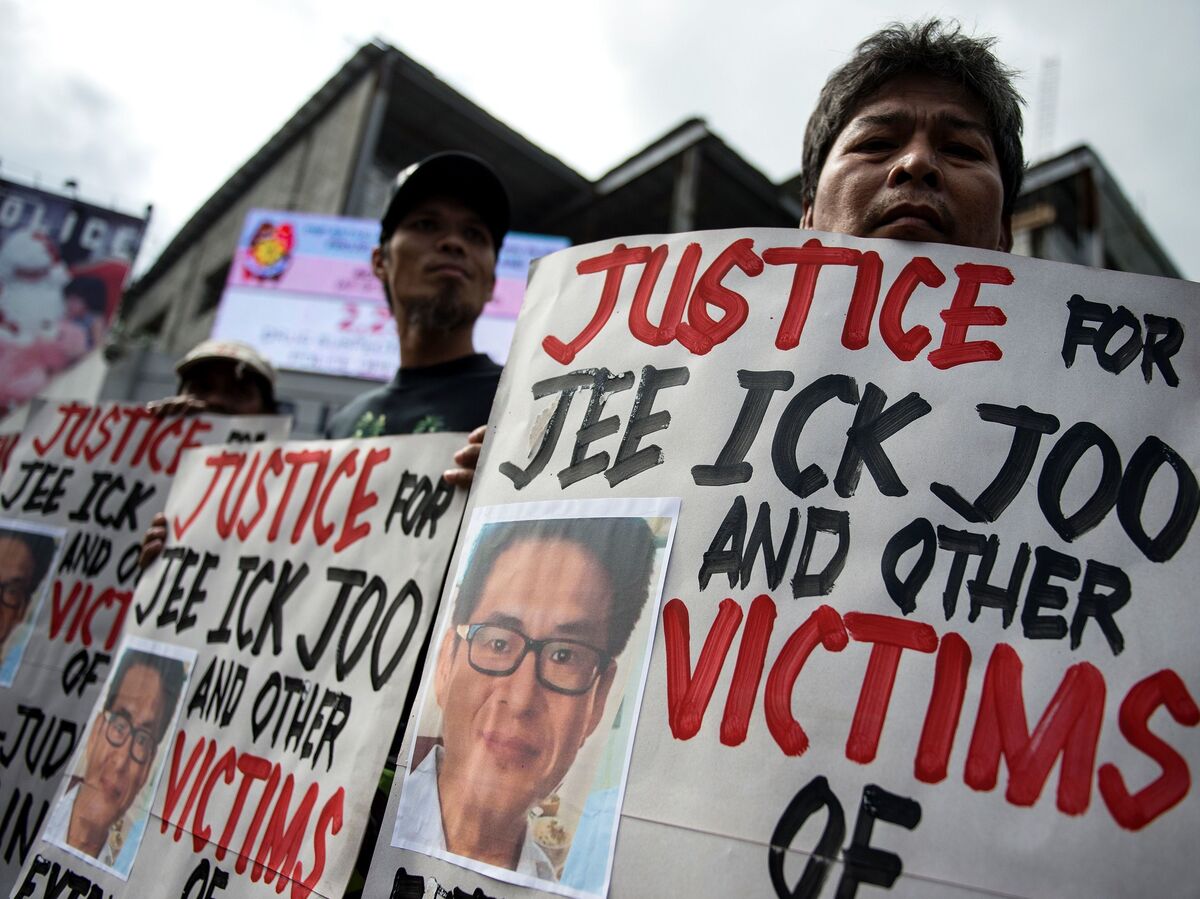 Activists protest at the headquarters of the Philippine National Police, condemning the government's war on drugs and holding placards showing murdered South Korean businessman Jee Ick-joo. The South Korean businessman was allegedly kidnapped by Philippine policemen under the guise of a raid on illegal drugs and murdered at the national police headquarters in Manila, authorities said.

A month ago, Philippine President Rodrigo Duterte hit the pause button on his controversial war on drugs. That war has left more than 7,500 people dead since Duterte took office last June, promising a "dirty" and "bloody" fight against drugs.

"Do your duty, and if in the process, you kill 1,000 persons, I will protect you," Duterte, nicknamed "The Punisher," told police days after his election.

And he did — standing by them fiercely in the months that followed, despite allegations of of extrajudicial killings that prompted international outrage.

But then came the case of South Korean businessman Jee Ick-joo, kidnapped and murdered in October by members of a police anti-drug unit. They'd seized him at his home outside Manila in an alleged anti-drug operation. He was strangled to death at police headquarters in Manila.

Some reports say Jee's wife paid a ransom to win his release, not knowing he was already dead.

When Duterte learned of Jee's murder in January, he wasn't pleased. He immediately ordered the Philippine National Police to stand down from its leading role in his anti-drug campaign. The force, he said, was filled with "scallywags" and was "rotten to the core."

Edcel Lagman, a Philippine congressman and one of the few Duterte critics in the House of Representatives, says he doesn't think the police "is entirely corrupt to the core. But the corruption in the police agency is substantial."

He wonders why it took a foreigner's death to make Duterte act.

"More than a single foreigner, 7,000 Filipinos had already been sacrificed in extrajudicial killings in this deadly campaign against the drug menace," he says.

Last month, Duterte vowed to "cleanse" the national police for before allowing it to return to the war on drugs, and tasked the much smaller Philippines Drug Enforcement Agency (PDEA) to take the lead in his anti-drug campaign. 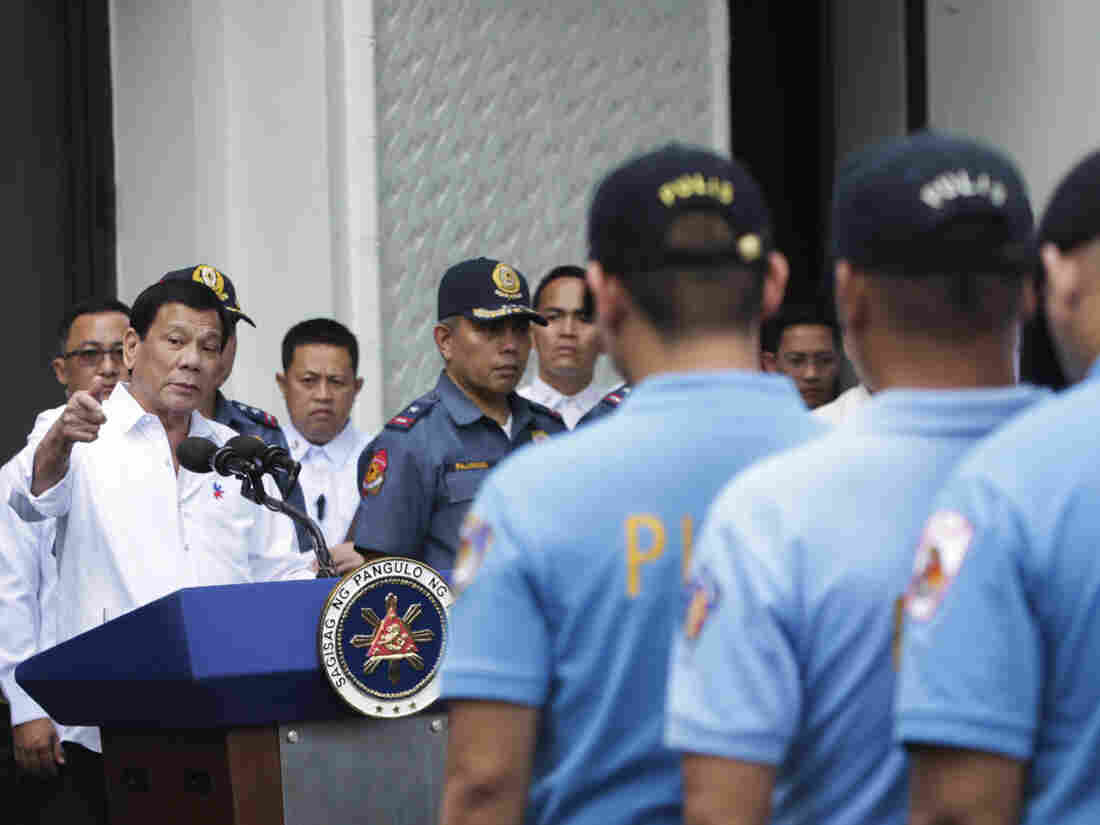 Philippine President Rodrigo Duterte berates police officers at the presidential palace in Manila on Feb. 7, after learning of the murder of a South Korean businessman. In expletive-laden remarks, Duterte told police he'd send them to a southern island to fight extremists from the Abu Sayyaf terrorist group. Robinson Ninal/AP hide caption 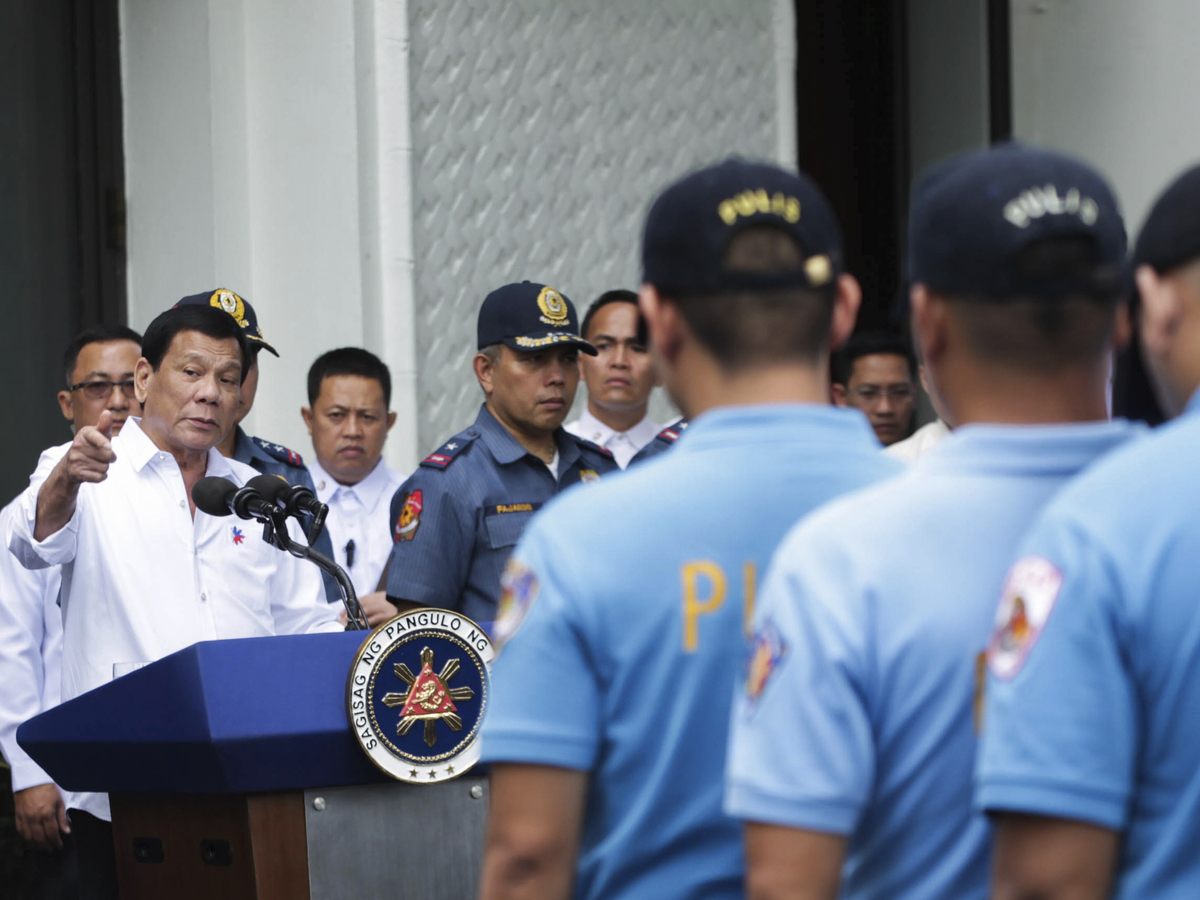 Philippine President Rodrigo Duterte berates police officers at the presidential palace in Manila on Feb. 7, after learning of the murder of a South Korean businessman. In expletive-laden remarks, Duterte told police he'd send them to a southern island to fight extremists from the Abu Sayyaf terrorist group.

The mercurial, short-fused president also made his anger known in a live television address on Feb. 7 at Malacanang Palace, where he unleashed a foul-mouthed tirade at several hundred cops standing sheepishly before him. He ordered them transferred to the island of Basilan in the violence-plagued south of the country, the home turf of the al-Qaida linked terrorist group Abu Sayyaf — the same group that beheaded a German hostage earlier this week.

"I will send you to Basilan, live there for two years. If you get out alive, you can return here," Duterte fumed. "If you die there, I will tell the police not to spend anything to bring you back here but to bury you there." Those who did not wish to go, he said, could quit.

Several dozen cops failed to show up for their trip south. Others, local reports say, had their deployment delayed to appear in court to answer charges against them. Duterte has indirectly threatened those who failed to show.

But on Monday, a month after pulling the plug on the national police, the Philippine online news site Rappler reported that Duterte would soon allow limited participation of the police in his controversial anti-drug campaign — under the supervision of the PDEA.

"I lack personnel," he said. "I have ordered [national police chief Ronald dela Rosa] to recruit young men in the [national police] imbued with the fervor of patriotism to be the members only of the task forces, but only a select few, those without cases and without a history of corruption."

When this will happen — and how many will be involved — is unclear.

"We hope and pray that the authorities will clean up their act," says Chito Gascon, who heads the Commission on Human Rights of the Philippines. "But I won't hold my breath after what I've seen the last seven months."

Of the 7,500 alleged drug related killings in the last seven months, Gascon says, more than 2,000 suspects have been killed in encounters with police. Police claim the suspects fired first. But there's a problem with that argument, Gascon says.

"The self-defense argument must be brought to the court," he says. "And of the 2,000 cases, not one single police officer has been brought to court. That's the problem. So it's not enough they do something about the case of the Korean national. It's just as important we begin the process of holding police officers to account."

Gascon says he hopes Duterte was sincere when he said that's what he wanted to do with the police after the murder of the South Korean businessman. But he has his doubts.

"Perhaps the pace will be slowed down, put the brakes on a little bit because people have crossed lines or violated rules or been found out," he says. "But in due course, I think eventually the killings will continue."

In the Arellano slum in Manila, a place where NPR has returned frequently since the war on drugs began, residents think so, too.

Cindy Medrano, who helps run her family's food stall in the neighborhood, says she supports the war on drugs and there's been far less crime in the neighborhood since it began. But she's not a fan of the extrajudicial killings and complains it's the poor who bear the brunt of the war on drugs — not the drug kingpins or corrupt cops deeply involved in the drug trade. She's confident the killings will resume again soon.

"I think this is just temporary," she says. Because President Duterte, she says, is the kind of person who finishes what he starts, even if due process is ignored.

Lilibeth Diego, a former methamphetamine addict who surrendered to police back in September out of fear that she'd be killed if she didn't, agrees. Since the war on drugs was suspended, some say dealers have moved back to their corners to do business. But not in Arellano, she says.

"Even if I want to use again here, you can't buy anymore, nobody's selling," Diego says.

And the cops are still around, she says, in plainclothes, wearing black shirts and shorts. Just watching, she says. And waiting.