Accessibility links
For Refugees In Germany, Hope And Frustration Mark Path Toward Integration : Parallels Refugees were seen as the answer to Germany's declining population and worker shortage. But the mood has darkened, and those refugees who reach Germany face long waits as they struggle to assimilate.

Listen · 8:15 8:15
For Refugees In Germany, Hope And Frustration Mark Path Toward Integration 8:15 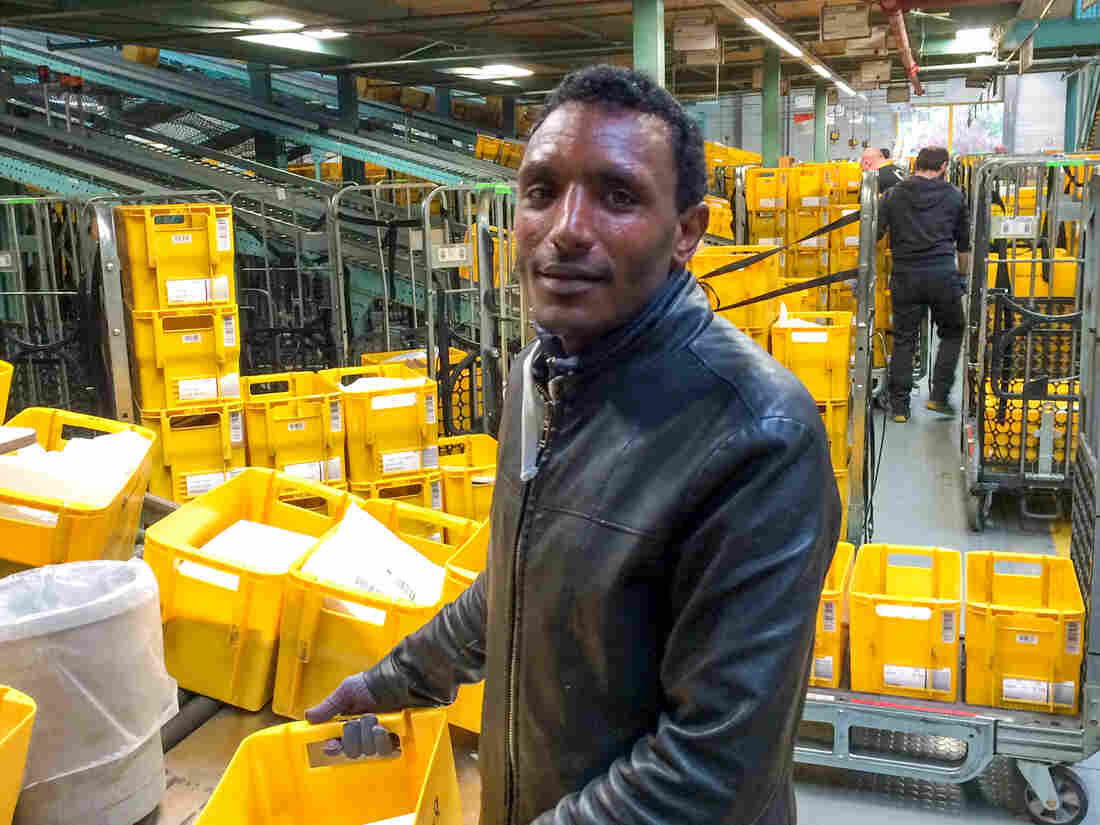 Solomon Yhdego gained asylum in Germany after escaping Eritrea when he was forced to join the army. John Ydstie/NPR hide caption 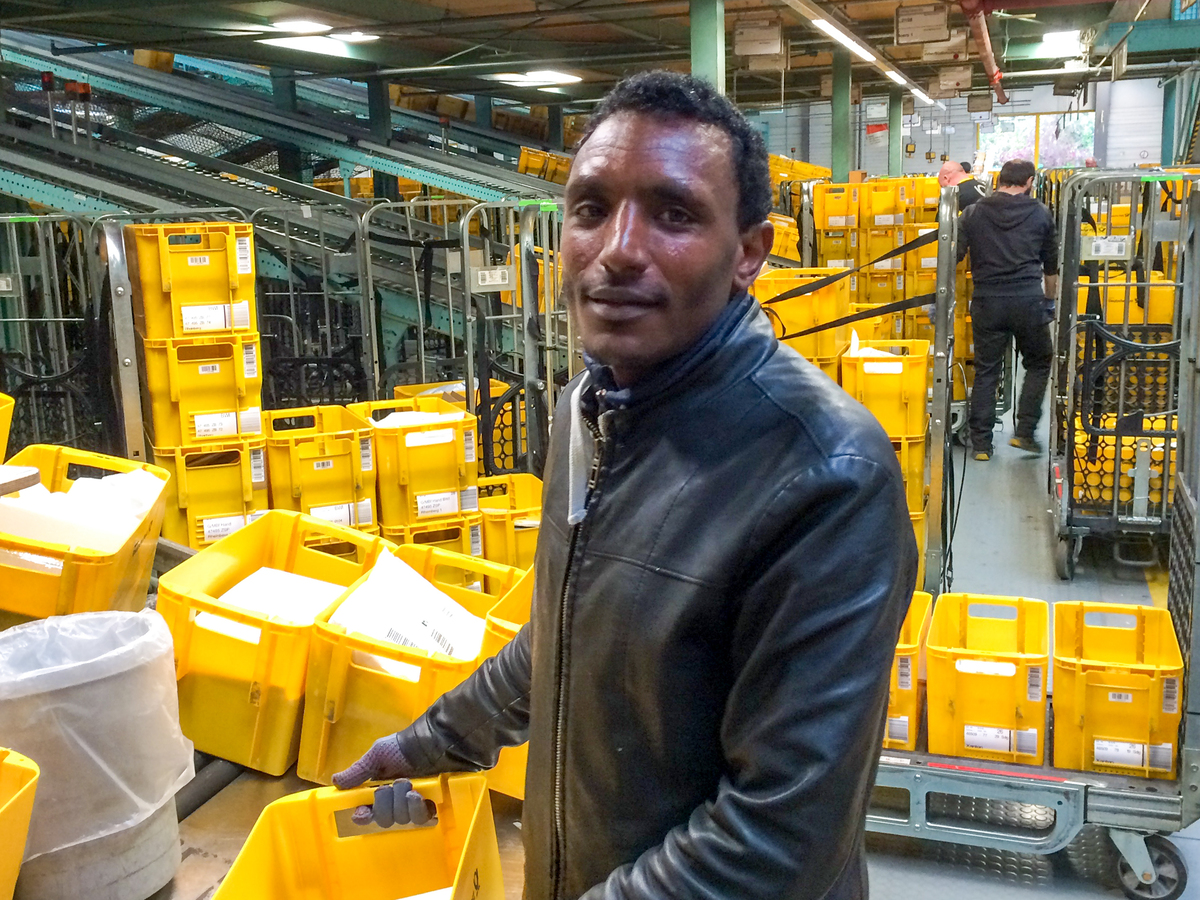 Solomon Yhdego gained asylum in Germany after escaping Eritrea when he was forced to join the army.

Disagreements over immigration policy could flare when German Chancellor Angela Merkel visits the White House later this week. In just the past two years, more than 1 million refugees — many of them Syrians — have inundated Germany as Merkel opened Germany's borders.

President Trump called that policy "catastrophic." In fact, integrating refugees into German society has become a challenge for Merkel as she seeks re-election.

When the wave of refugees first surged into Germany there was lots of talk that they might be the answer to the country's declining population and big worker shortage. But the mood soured after the assaults by male refugees on women during New Year's Eve celebrations just over a year ago. It darkened further following the attack on a Berlin Christmas market by a Tunisian refugee three months ago.

Waiting for an interview

Those incidents raised even more hurdles for 27-year-old Akhlaq Hussain. A math teacher in his former life, he fled to Germany from Pakistan after he and his school received threats of kidnapping and death from the Taliban. 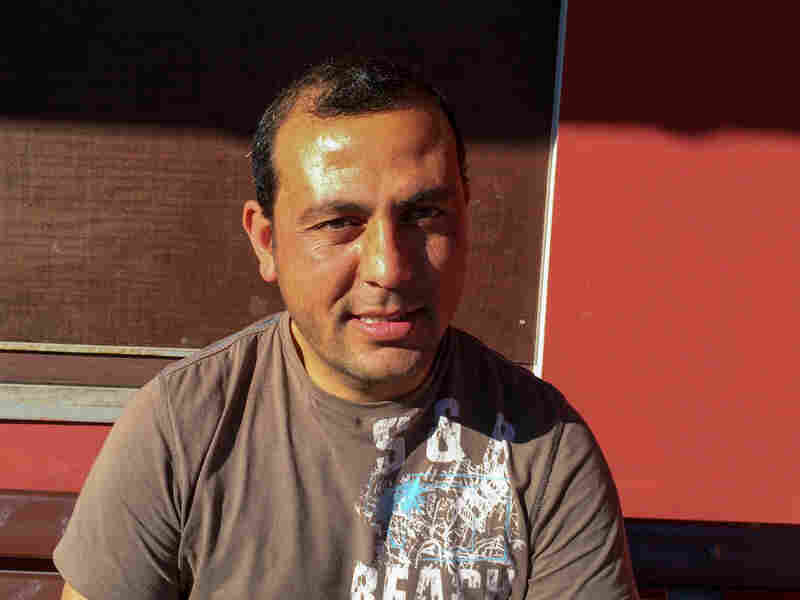 Akhlaq Hussain fled to Germany from Pakistan after he and his school received threats of kidnapping and death from the Taliban. John Ydstie/NPR hide caption 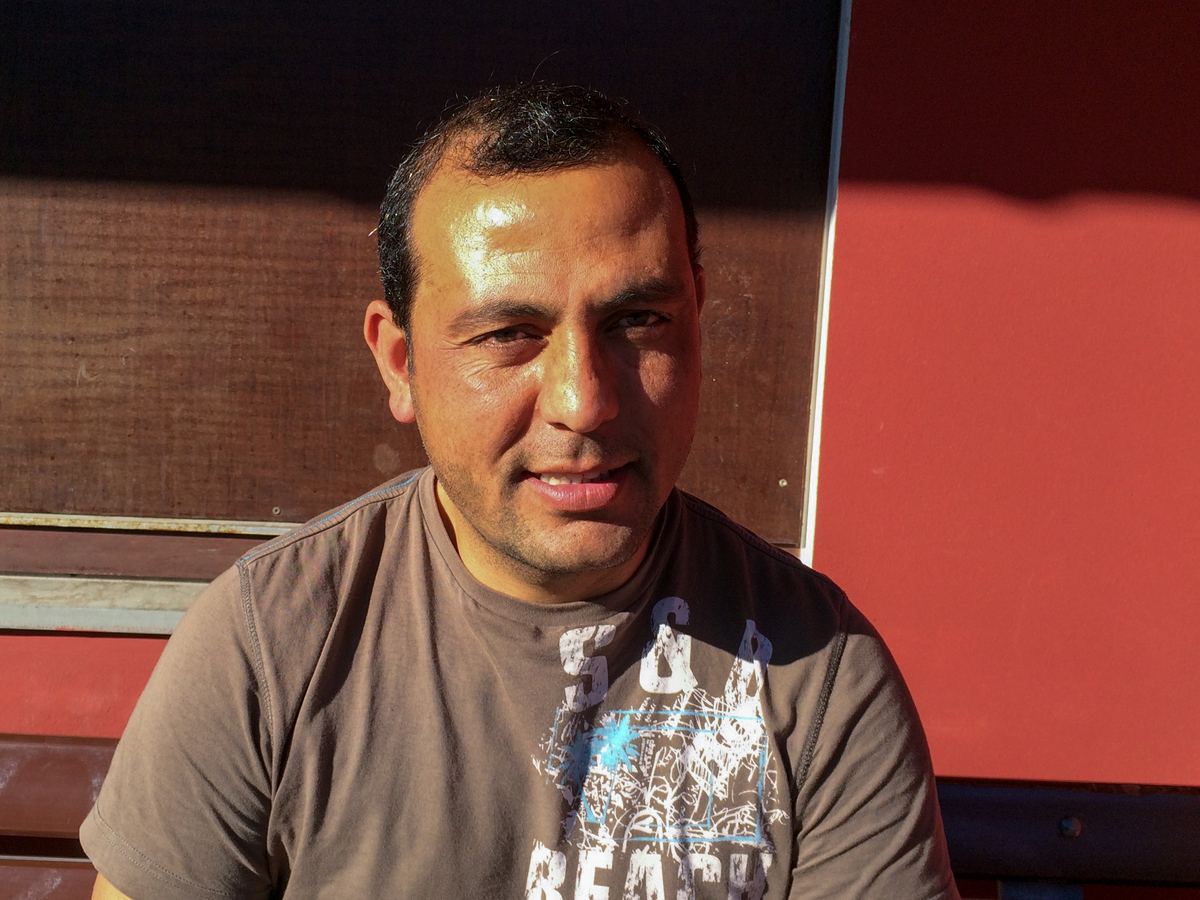 Akhlaq Hussain fled to Germany from Pakistan after he and his school received threats of kidnapping and death from the Taliban.

"They demand some money. If we pay monies then childrens will be free," Hussain says. "If we don't pay monies, they kill the peoples and childrens and cut the head, you know, they say 'Allahu Akbar.' "

But a year and a half after a harrowing journey, much of it on foot, crossing mountainous borders and being beaten by police in Bulgaria, Hussain is stuck in refugee housing in Neuss, a German town across the Rhine River from Duesseldorf. Hussain says he has been treated well at the local refugee center, even though the self-service kitchen needs renovation and the bathrooms need work. He has spent more than a year and a half here waiting just to get an asylum interview. In the meantime, there's not much to do except chores like vacuuming the carpets in the room he shares with another refugee.

Refugee from the wrong country

Hussain's big problem is that he is Pakistani. Germany doesn't recognize Pakistan as a country dangerous enough for its citizens to automatically receive asylum. As a result, few social services are available to him. Some local volunteers, like Ilona Valero, have been providing some aid. "I try to help with all the papers. In Germany there are a lot of papers," she says with a resigned laugh. "They are waiting such a long time. There is no structure in the day. They're waiting for German lessons. They're waiting for permission to stay and permission to work."

Recently the volunteers have managed to get temporary jobs for a few refugees, including work at a garden center for Hussain. It will help him pass the time while he awaits an asylum decision. But his odds are not good — during the past two years fewer than 10 percent of Pakistanis seeking asylum in Germany were successful.

Thirty miles up the Rhine River, in Cologne, refugees, most of them Syrians, sit in a classroom with the hum of traffic and fresh air flowing through an open window. They're absorbing information about German laws and customs at an integration center in a new high-rise office building.

Karim Khayal, a counselor here, says the key to success for refugees is learning German.

"There is no integration without language." He says that's something the refugees have internalized. Khayal says they know that language is the No. 1 requirement and they understand that "speaking efficient German means having arrived in Germany."

And there's a lot at stake, Khayal says. He points to Germany's experience with Turkish guest workers starting in the 1960s. The government failed to integrate them into German society, and there continues to be alienation in that community — which now numbers 3 million.

Khayal says the danger is very real that "if we don't take care now, we're going to have a larger group of alienated young men — men who are angry, who are bitter, who are both distant to their country of origin and distant to their new home country and who are going to, of course, have radical ideas."

Thirty-three-year-old Ibrahim Habib, a refugee from Syria, appears to be well on his way to successful integration. He was at the center meeting with Khayal. In Damascus, Habib designed and cut clothing. He says that job is out of reach in Germany, so he wants be a bicycle mechanic. 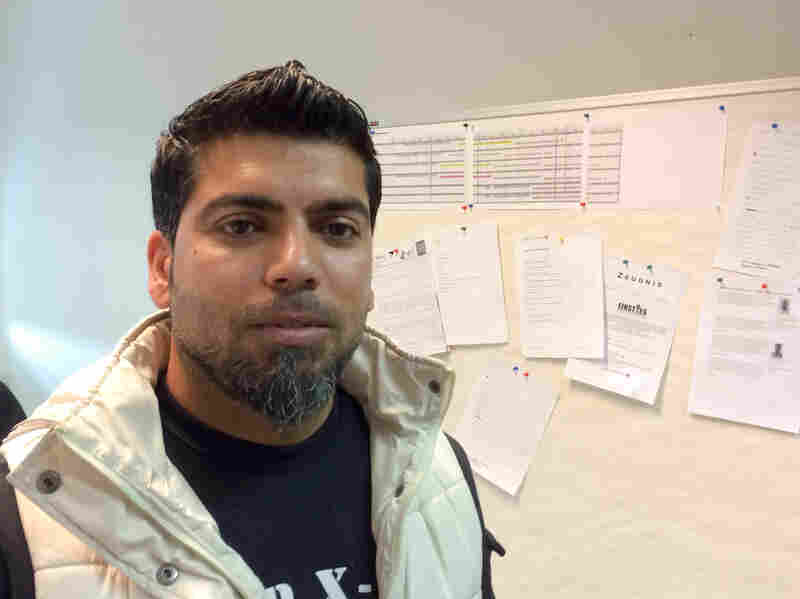 Ibrahim Habib is a refugee from Syria, where he designed and cut clothing. Now, he hopes to be a bicycle mechanic. John Ydstie/NPR hide caption 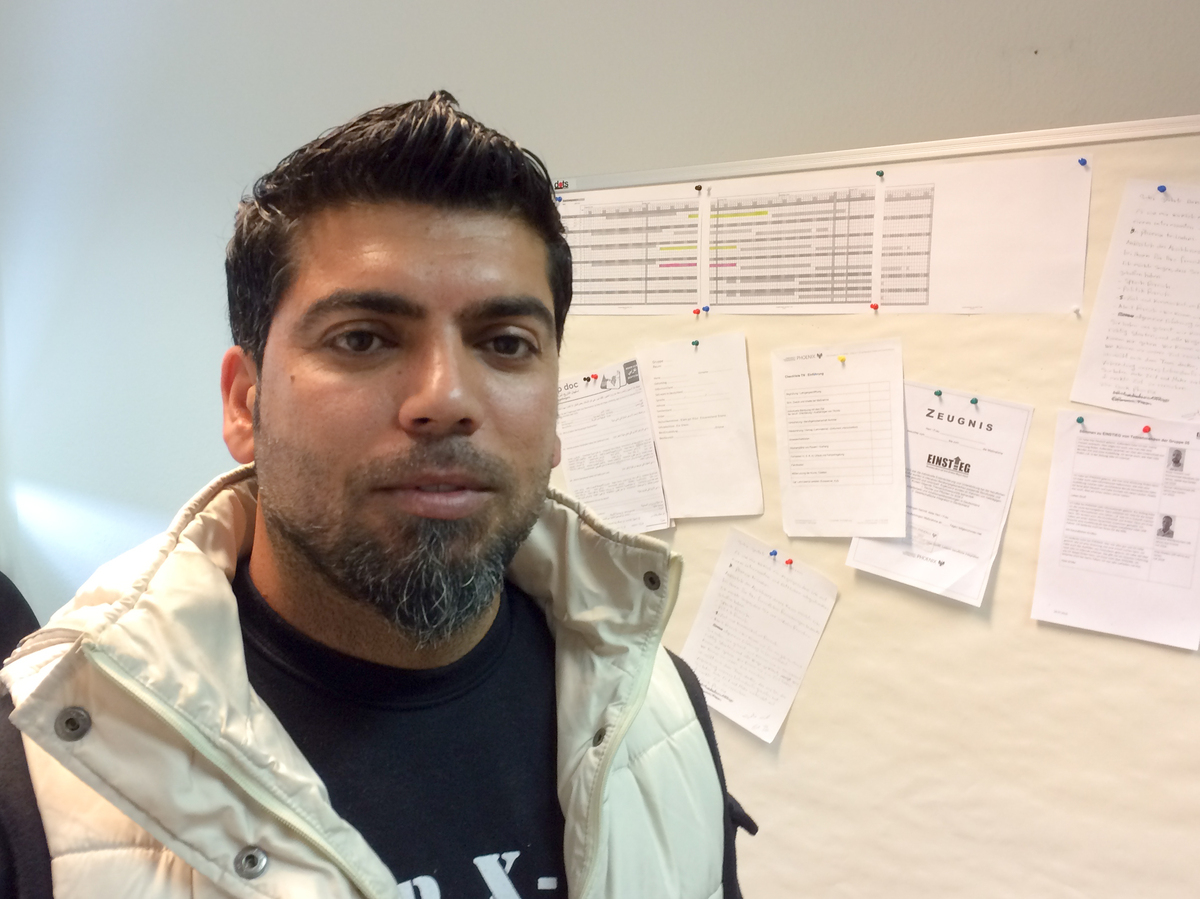 Ibrahim Habib is a refugee from Syria, where he designed and cut clothing. Now, he hopes to be a bicycle mechanic.

Like nearly all Syrian refugees, Habib has been granted asylum. That makes him eligible for government support while he learns German and gets job training. Habib says Germany is home now and he wants to be a German in the future. "The past life is gone," he says, "and seeing the respect you got from the German society only means that you have to give this respect back, and want to be part of this society — not go back to your Syrian past."

But with language and integration courses, plus an apprenticeship, it could still be years before Habib is fully employed. Christoph Moeller, until recently chief spokesman for the German Employment Agency, estimates it could take six years for Germany to fully integrate this wave of refugees into the workforce. "It's a long journey and it's going to be an expensive journey," says Moeller, "but in the end for society these costs are actually justified, because the costs in not doing anything will be much higher."

In the past year around 40,000 refugees found jobs in Germany. Meanwhile, close to half a million are seeking employment, but they need language and vocational training first.

Solomon Yhdego is one refugee who has found a job. He works 20 hours a week in a vast Deutsche Post/DHL sorting facility in Duisburg. He makes about $12 an hour moving big yellow boxes of mail onto metal racks for delivery.

Yhdego, who's 31, easily gained asylum in Germany after escaping from Eritrea, which has one of the most repressive governments in the world. He was about to enter the university there when he was forced to join the army. He fled, leaving behind his wife. Yhdego says it has been very difficult, but going home is not an option. "When I go, they kill me," he says. "It is very hard."

Yhdego learned enough German to get an internship. He impressed Georg Schikowski, the plant manager, who gave him a six-month contract. "The goal is to [keep] him for a long, long time," says Schikowski, "because he has shown us that he works good, and that's the test."

Some Germans are skeptical about the usefulness of low-skill refugee workers. But Christof Ehrhart, a Deutsche Post/DHL vice president, says they're valuable, especially at companies like his that have lots of blue-collar jobs. And, he says, the refugees have demonstrated that they are motivated and engaged, "because what they had to do in order to leave their country and come to a different place needed a lot of 'entrepreneurship' and willingness to run risks."

Deutsche Post/DHL is a leading corporate employer of refugees, but so far it has fewer than 300 on the payroll. For integration to be successful, big German firms will have to do better, and Ehrhart says Germany can't afford to fail. "I think the world is watching us," he says. "I have to put it another way: I think there is no alternative than finding a solution. Because if we don't find a solution as one of the richest countries on the planet, who else should?"

Back at the refugee barracks in Neuss, another Pakistani, Kamal Hussain, is waiting for his asylum decision. He fled Pakistan more than two years ago after the Taliban threatened to kill him for administering polio vaccine. He left behind a pregnant wife. She gave birth, but the son Hussain never saw died within months. Hussain is frustrated. He has little to occupy his time. He knows that's dangerous.

"If you're alone here and you have no activities right now, you will be negative," he says. "You will be fighting with someone, or maybe you do something bad."

Germans are worried about that, too — frustrated young men who might turn to crime or even terrorism. It has fueled a rise in support for the nationalist Alternative for Germany party, which is threatening Merkel's bid for re-election. There's no doubt that integrating refugees into German society is a high-stakes project.

Commentary: Why I Decided To Become A German Citizen After Brexit