Accessibility links
Caught Up In Travel Ban, Iranian Transgender Asylum Seeker Sees 'No Way Forward' : Parallels Bahar says he fled to Iraq a couple of years ago, after facing harassment in Iran. As he's awaited approval to travel to the U.S., he says he's also faced threats in Iraq. 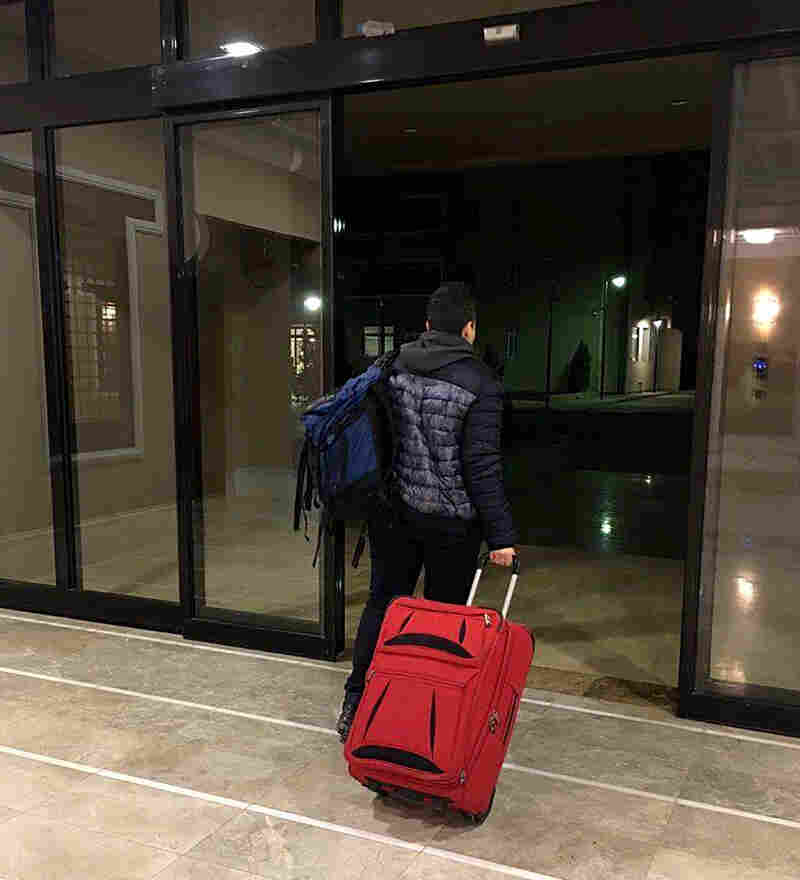 Bahar fled to Iraq after facing harassment in Iran. "I was hoping so much that I could get my flight to America before the crackdown resumed," he says. "So far, there's no way forward for me, I'm stuck." Courtesy of Papal Ahmadzadeh hide caption 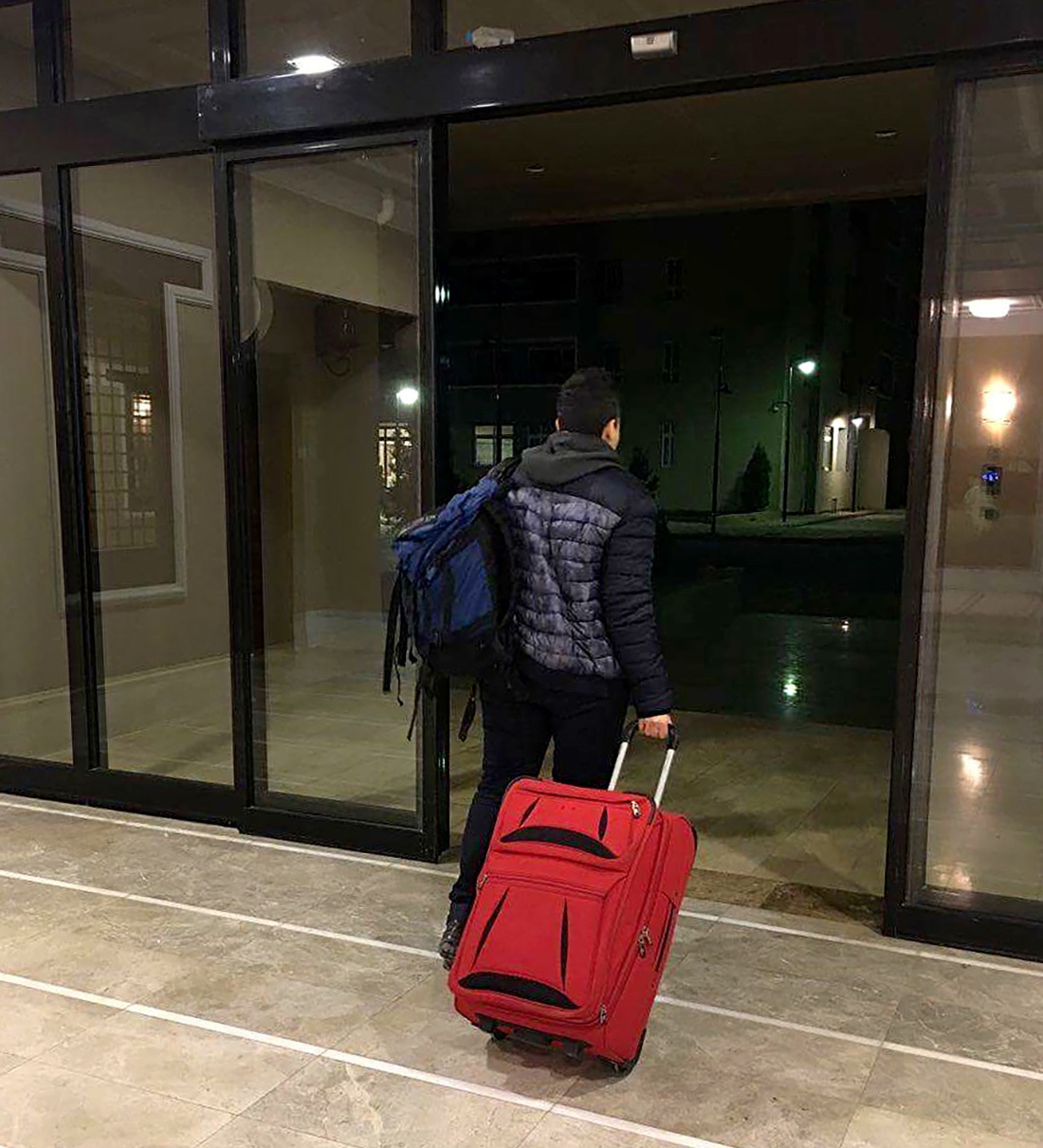 Bahar fled to Iraq after facing harassment in Iran. "I was hoping so much that I could get my flight to America before the crackdown resumed," he says. "So far, there's no way forward for me, I'm stuck."

President Trump's revised travel ban – which suspends visas from six predominantly Muslim countries and suspends refugee admittances – was to have gone into effect at 12:01 a.m. March 16, before a court in Hawaii blocked it on Wednesday. The ban covers citizens of Somalia, Sudan, Iran, Yemen, Syria and Libya and was denounced by more than 130 foreign policy experts.

Iraq, included in the original ban Trump announced, is no longer on the list of affected countries. But the prospect of the new order is still affecting some in Iraq who are seeking asylum in the U.S.

NPR reached an Iranian transgender asylum seeker in the Iraqi city of Irbil, just as he realized his hopes of reaching the U.S. would almost certainly be dashed by the revised executive order.

He gives his name as Bahar – he's afraid to reveal his family name because it could cause problems for his family back in Iran. Considered a girl at birth, Bahar chooses now to be identified as male.

Bahar says his initial optimism has turned to depression and anxiety, as his relocation process has dragged on for nearly two years.

"I don't really know what to do, I was hoping so much that I could get my flight to America before the crackdown resumed," he says. "My whole time here, I've been under pressure – I was not just criticized, I was assaulted, both for being Iranian and because they thought I was a lesbian." He says human rights groups are aware of his situation, "but so far, there's no way forward for me, I'm stuck."

Bahar says the problems he faced back at home did not come from his own family, but from relatives of his partner who condemned their relationship as immoral and sought to cause trouble for her. Bahar says things came to a head in 2014.

"I traveled to the Pride March in Istanbul," he says, "and when I got home, the government found out where I'd been and began to make trouble for me. I was told I was likely to be arrested and prosecuted."

He says the pressure grew so great that he and his partner ended their relationship, and Bahar fled to Irbil. He says it took him nearly a year-and-a-half to get his main U.S. asylum interview. Just last month, he was elated to get his medical exam completed, thinking it meant approval to travel to the U.S. would follow shortly.

But in the meantime, the new administration in Washington launched its campaign to stem immigration, especially from Muslim countries — though administration officials deny the executive orders on immigration amount to the "Muslim ban" Trump promised as a candidate.

When the U.S. court system blocked the initial travel ban, Bahar remained hopeful. But his case wasn't yet given final approval. Now he's facing the reality of being trapped in Irbil for an extended period.

"It's been two years, I have very bad financial problems, and things are difficult for me here in Irbil," he says. "This is a very conservative, religious society and I face lots of problems here. People criticize the way I look, the way I dress, they ask why do I dress like a boy?"

He says he lost his job and had to move to new quarters, and the new travel ban — which he learned about from a reporter — has left him feeling desperate.

"I'm completely depressed, and I don't know what to do," he says.

Part of the problem, he says, is feeling completely isolated. He says he has yet to connect with any other LGBT asylum seekers in Irbil.

"As far as I know, I'm the only Iranian LGBT case in Irbil, maybe the whole of Iraq," he says. "I can't get any information out of [the U.N. refugee agency], the only bits of information I get are from Iranian refugees in Turkey. The only thing I can do is try to keep my spirits up and not give up hope."

A State Department official declined to comment on Bahar's case in response to NPR's request.

NPR has interviewed other LGBT Iranians in similar situations. Two gay men who made their way out of Iran to Turkey are now safely in the U.S. Iranians say they've seen that the system can work – but if and when it might work for Bahar and others in his situation is now a painfully uncertain question.

In a previous version of this story, we incorrectly referred to Bahar as a lesbian, because of a translation error, and used the female pronoun in referring to Bahar. Bahar is transgender and self-identifies as male.