Accessibility links
In Ukraine, Some Signs Of Progress In Uphill Battle Against Corruption : Parallels Ukraine is considered one of the world's most corrupt countries. But activists are encouraged by the ongoing case against Roman Nasirov, the country's tax chief, who is accused of embezzlement. 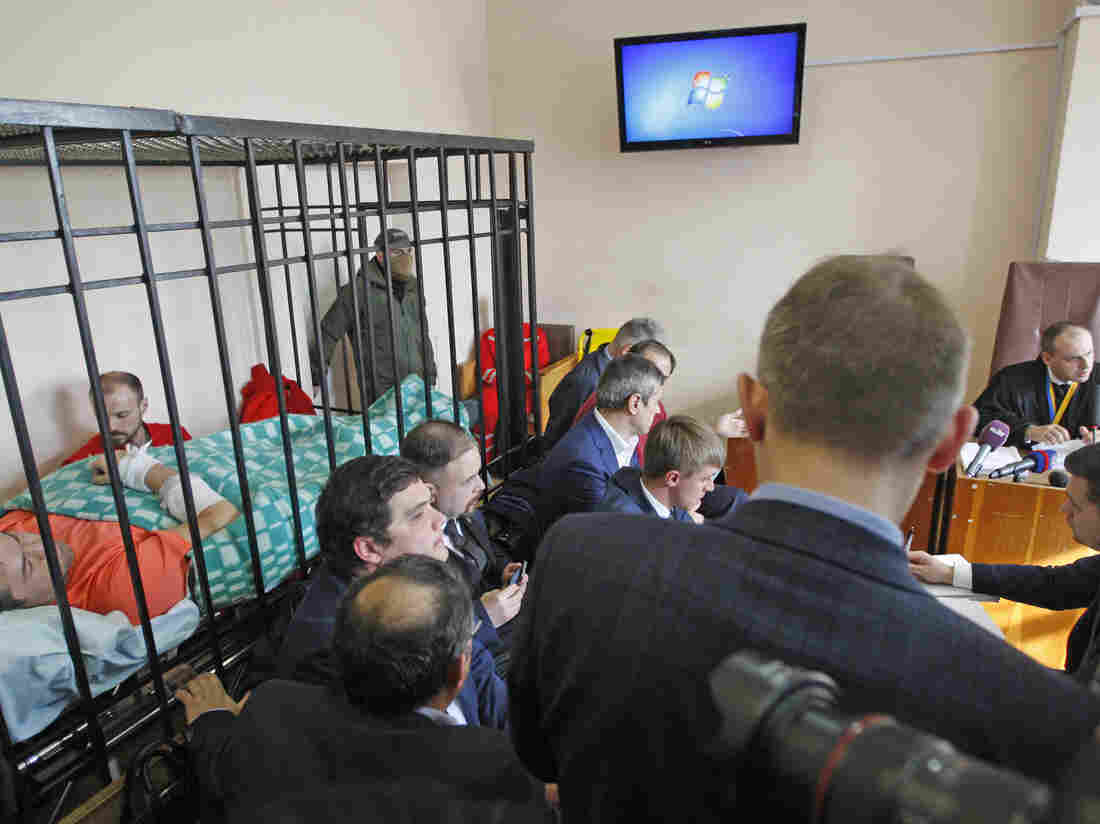 Roman Nasirov (left, in orange), the suspended head of Ukraine's tax service, lies inside the defendant's cage during his court hearing in Kiev on March 5. He was first detained in a hospital, claiming illness. Nasirov is accused in an embezzlement scheme amounting to more than $70 million. NurPhoto/NurPhoto via Getty Images hide caption 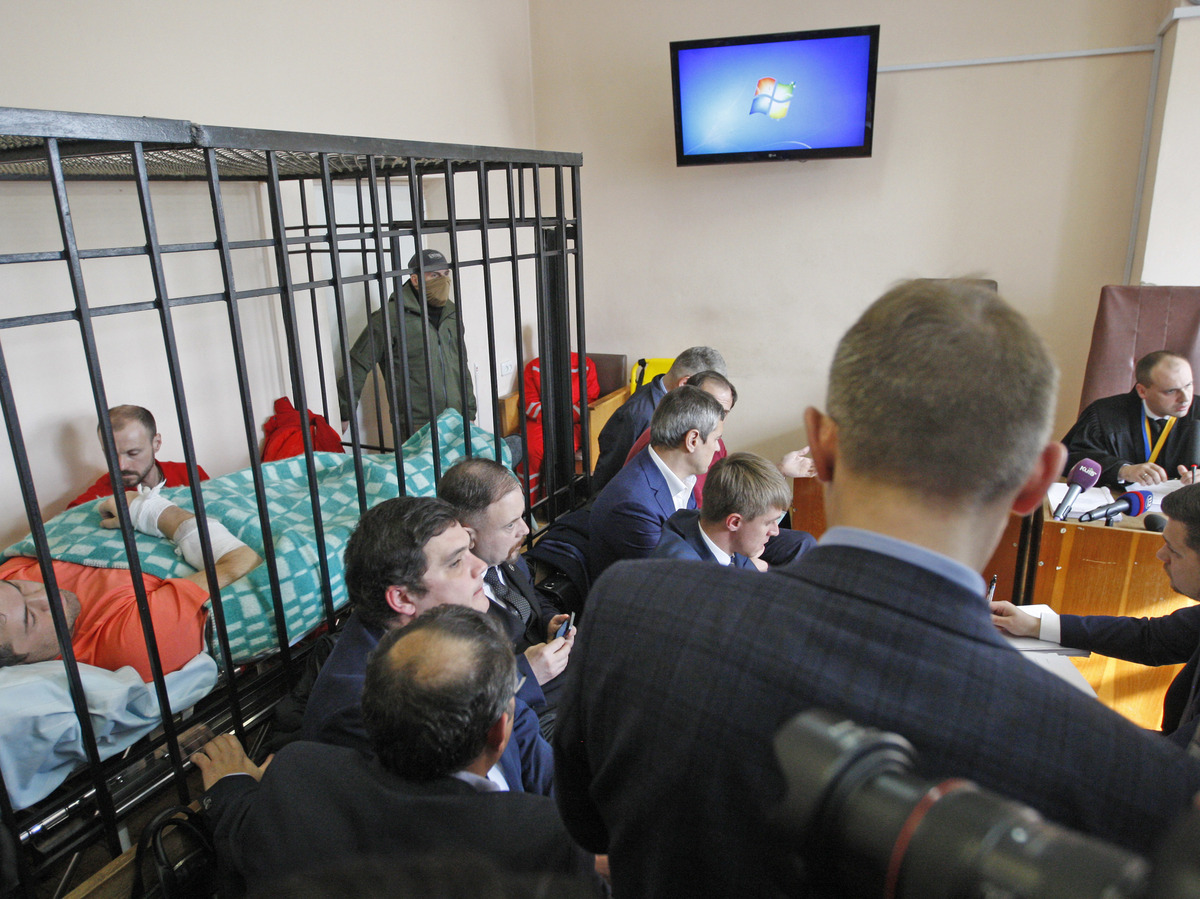 Roman Nasirov (left, in orange), the suspended head of Ukraine's tax service, lies inside the defendant's cage during his court hearing in Kiev on March 5. He was first detained in a hospital, claiming illness. Nasirov is accused in an embezzlement scheme amounting to more than $70 million.

Kiev's Solomyansky District Court is a four-story pink building squeezed between an Orthodox church with golden domes and the soaring office tower of Ukraine's tax service.

"It's a very symbolic place," said Maxim Eristavi, a journalist and activist, as he returned to the site of a dramatic standoff that took place in early March.

Inside the court, a judge was preparing to rule on extending the pre-trial detention of Roman Nasirov, the suspended head of Ukraine's State Fiscal Service. Afraid that Nasirov would be allowed to escape the country's first major graft trial, Eristavi and other protestors blocked the narrow access ways to the courthouse for 48 hours straight.

Feeling the pressure from the street, the judge prolonged Nasirov's detention by 60 days and set bail at nearly $4 million, a record for Ukraine. 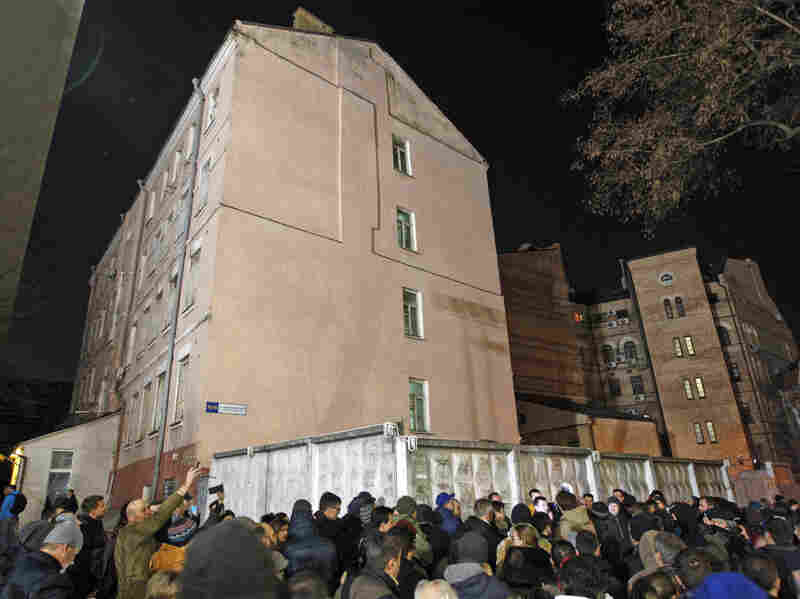 Activists gather March 5 outside a Kiev court to prevent the release of tax chief Roman Nasirov. Protests took place over the course of 48 hours. NurPhoto/NurPhoto via Getty Images hide caption 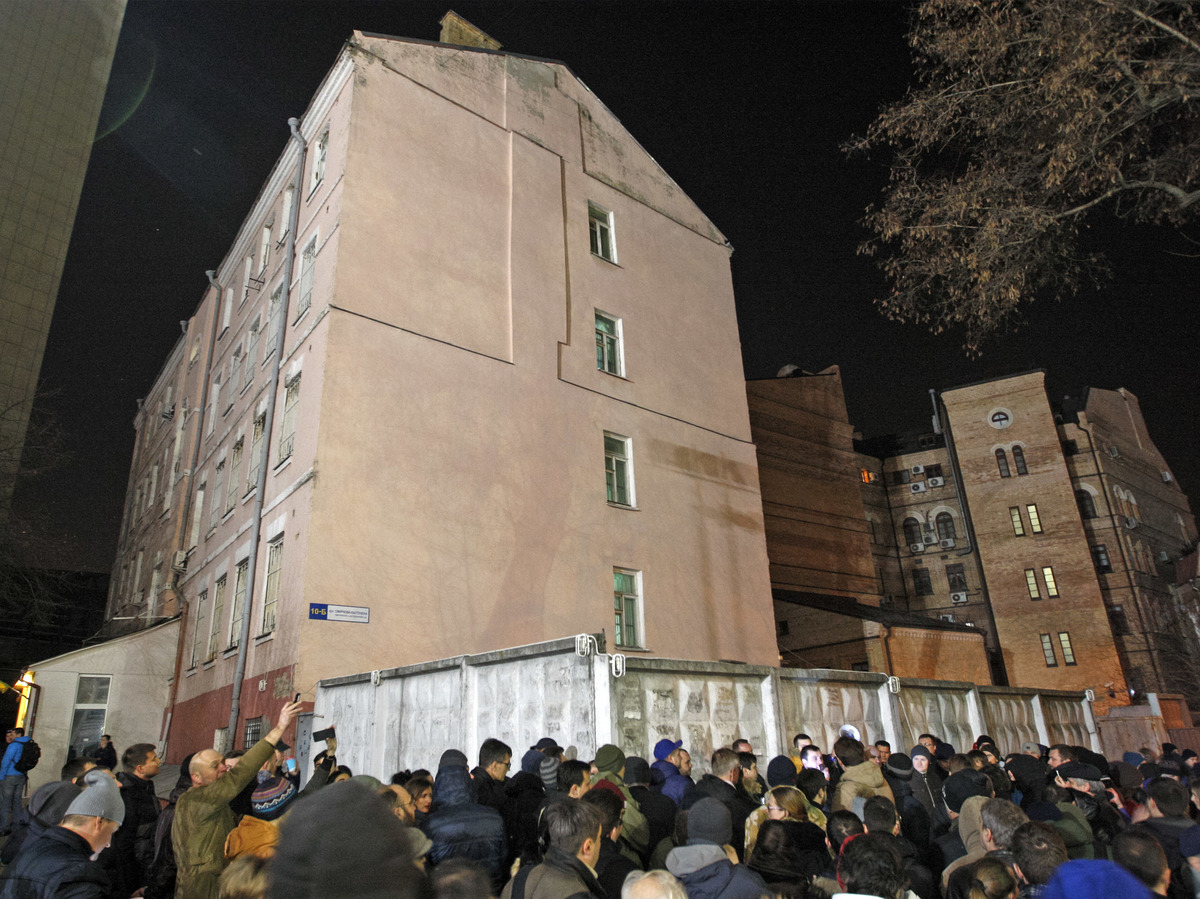 Activists gather March 5 outside a Kiev court to prevent the release of tax chief Roman Nasirov. Protests took place over the course of 48 hours.

Activists like Eristavi call this the biggest victory in the fight against corruption since Ukraine became an independent country in 1991. Three years after bloody protests took place on the Maidan, Kiev's main square, against then-President Viktor Yanukovych, Ukrainians are impatient with the pace of reform under President Petro Poroshenko.

"Those two nights showed us that there is still public anger and civil society is a powerful force," said Eristavi. "It doesn't mean the revolution is a success. But it means it's not dead yet."

Ukraine aspires to join the European Union, but is considered one of the most corrupt countries in the world. Activists and international donors like the International Monetary Fund are placing their hope in the fledgling National Anti-Corruption Bureau of Ukraine (NABU) and special prosecutors, who brought Nasirov's case to court.

Nasirov is accused of benefiting from an embezzlement scheme amounting to more than $70 million. NABU officers detained him March 2 in a Kiev hospital, where he claimed to be recovering from an illness. Nasirov was wheeled in on a gurney and lay in the courtroom without a shirt. Prosecutors suspected the 38-year-old tax chief of feigning sickness – a tradition for Ukrainian officials caught up in legal troubles.

"This is a person who is extremely close and indispensable for President Poroshenko and his administration," Eristavi said, so it was "mind-blowing" to see him in court.

Thanks to the peaceful outcome of the courthouse protest, Ukraine avoided a major political crisis, says political scientist Volodymyr Fesenko. The country suffers from a "Maidan syndrome," he says, with activists using blockades and other direct action to put pressure on the government.

"If they use them too often and for any reason, they could end up destroying the state. That's the biggest danger," Fesenko said. 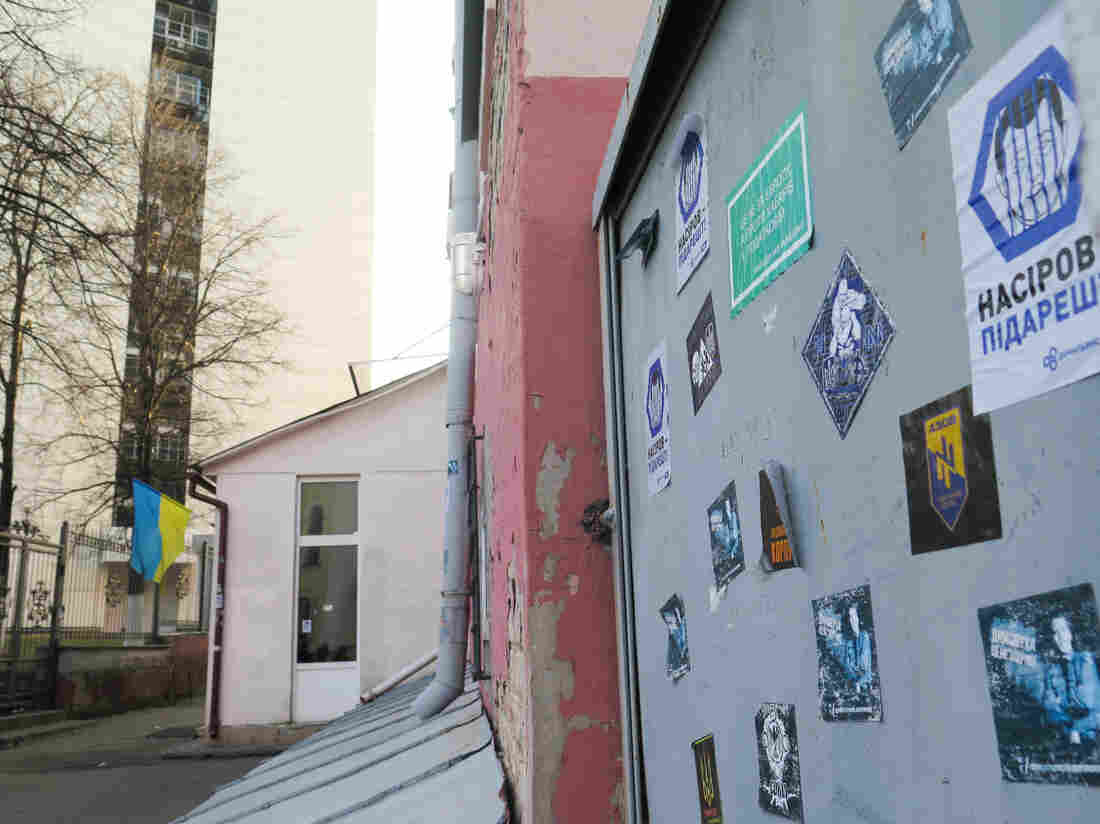 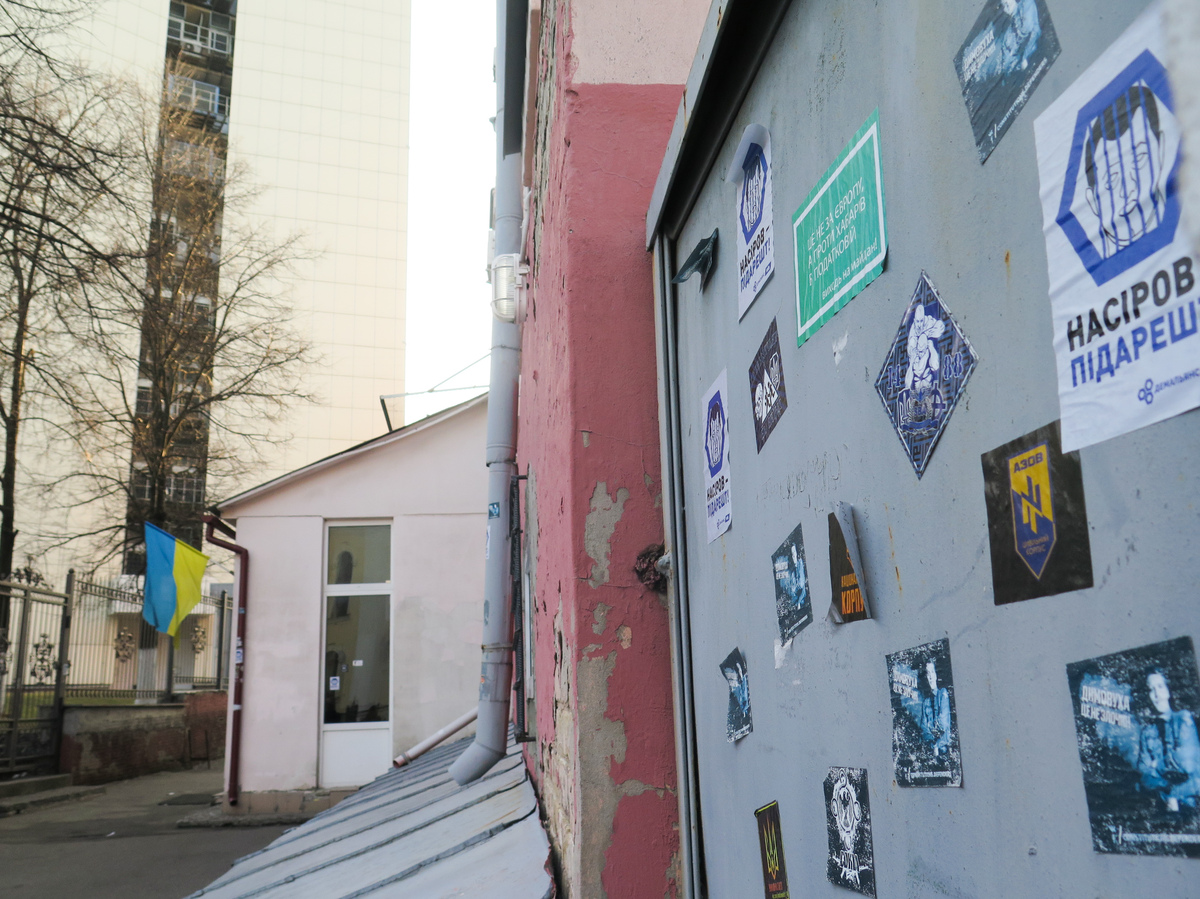 Stickers on a wall at Kiev's Solomyansky District Court demand justice for Ukraine's tax chief, Roman Nasirov, who is accused of corruption.

Daria Kaleniuk, the director of the non-governmental Anti-Corruption Action Center, says the protesters were justified in blocking the exits to the court.

"In an ideal world, there'd be no need for citizens to enter the courtyard and wait for the judge to appear," she said. "But in the Ukrainian reality, where the court system is not reformed yet, we have to introduce enhanced civil society control."

A new generation of professionals is beginning to go into government, Kaleniuk said, and the introduction of anti-corruption courts should help justice runs its course.

She gives little credit to Poroshenko, elected on a reform platform in May 2014, for the changes. She calls him part of the old system.

Rostyslav Pavlenko, the deputy head of the presidential administration, insists there has been progress.

"Much was done to cut this tail that goes into the Soviet times – or post-Soviet times – and actually kick-start the new institutional outfit," he said. "In three years, we have had to do the work that was neglected for more than 20."

Pavlenko lists tough reforms that Poroshenko's government has pushed through: the reorganization of the armed forces in wartime conditions, asset declarations for government officials, the establishment of NABU and hiring of special anti-corruption prosecutors.

Still, 72 percent of Ukrainians believe their country is headed in the wrong direction, according to a poll taken in the fall. Corruption is named as the No. 2 problem, after the war against Russian-backed separatists in eastern Ukraine.

"I think now, we're probably at the most critical point because all the externalities and collateral damage have happened," Pavlenko said, referring to the war and economic hardship. "The positive results are only starting to surface." 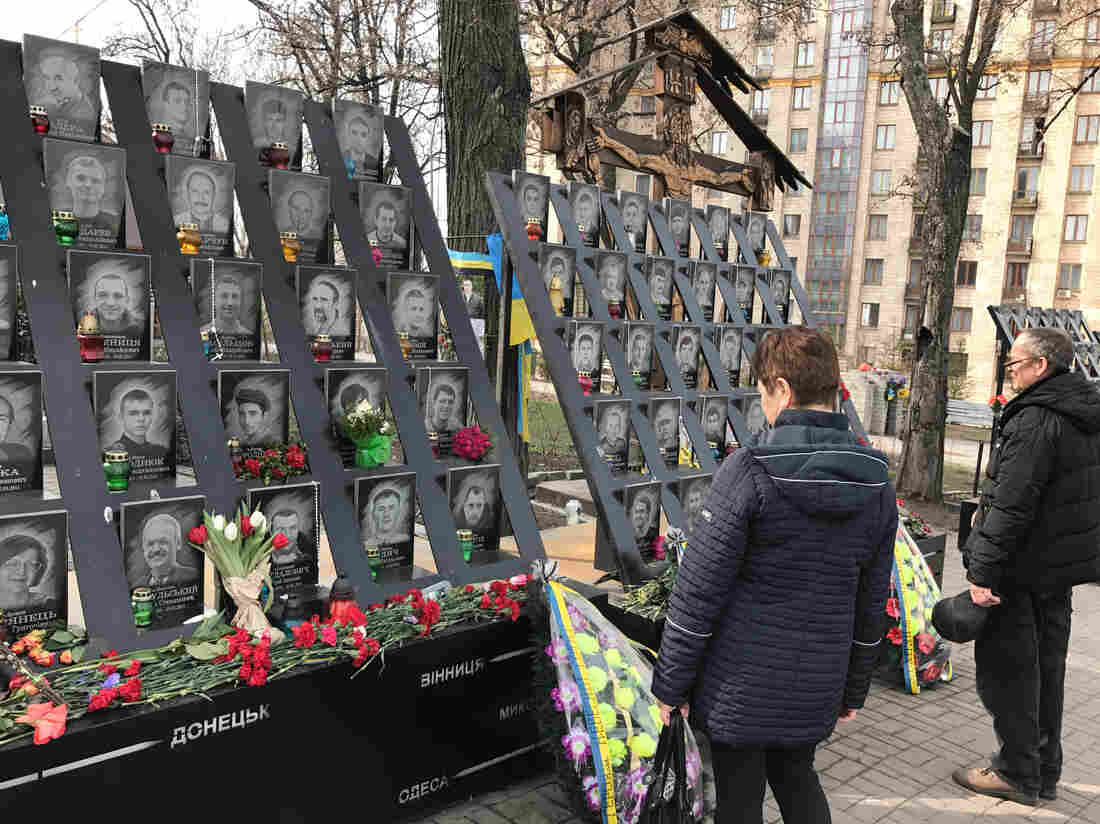 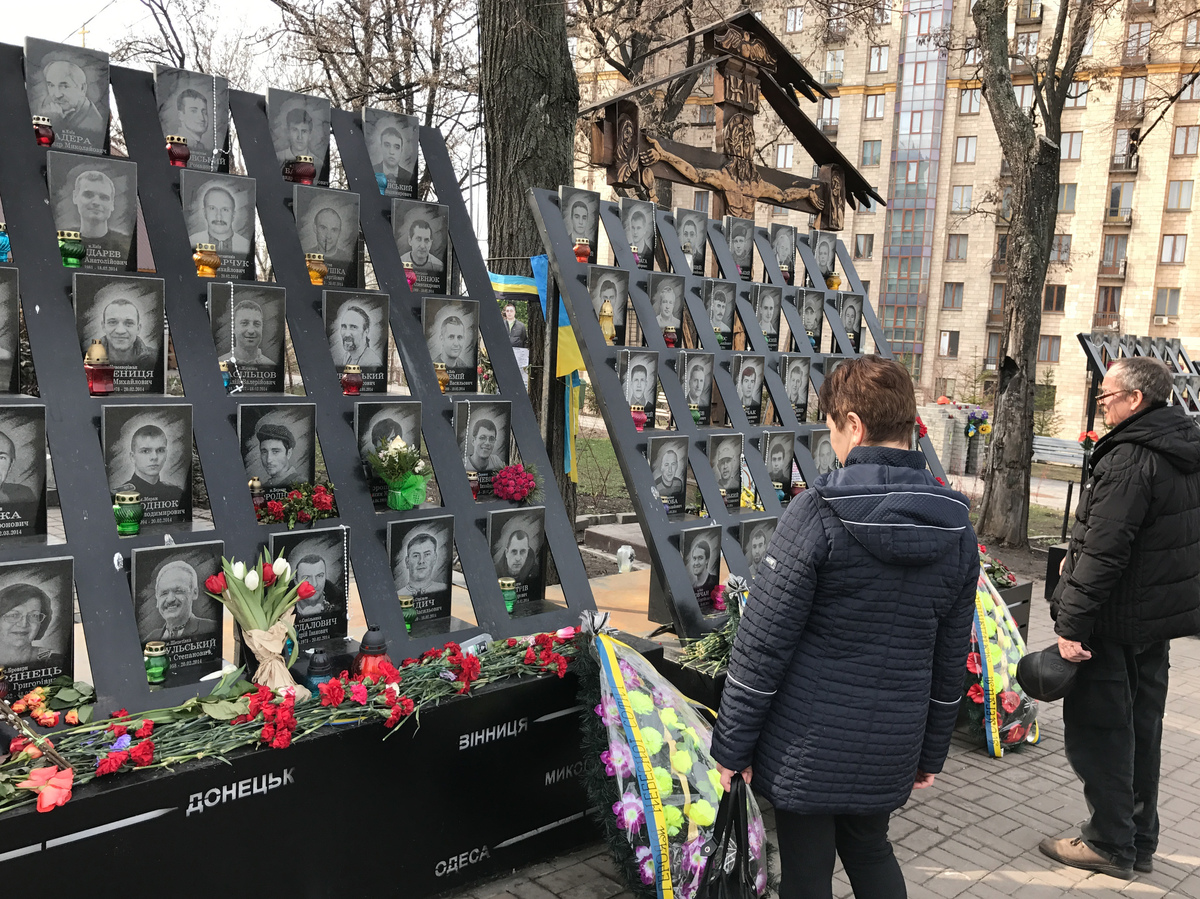 Passersby pay tribute to activists who were killed during 2014 anti-government protests near the Maidan, Kiev's main square.

The presidential administration is a three-minute walk from the Maidan, where there are memorials to the anti-Yanukovych protesters who were picked off by snipers back in 2014.

Yevgeniy Bulgakov, an engineering student crossing the square, draws a blank when asked if he knows who Nasirov, the disgraced tax chief, is. The 19-year-old says he hasn't seen any serious changes since the Maidan protest.

"The old guys left, some new guys came in," he said. "Since independence, we've been fighting corruption without any result. It's how we live."

Yuliya Laktionova, 32, who works in publishing, disagrees. Many Ukrainians complain that when they interact with officials, teachers, even doctors, they are expected to pay bribes to get what they need. Laktionova says the Maidan protest made people more aware of their civic duty not to pay bribes.

"I think that's a personal decision for each individual," she said. "Either you play by those rules or you don't. There's always a choice."

The European Union, the United States and the IMF have all prodded the Ukrainian government to change its ways.

"We know that many of these high-level officials might not have been so genuine when they were pressing for anti-corruption measures and steps," said David Stulik, spokesman for the EU delegation in Kiev. "On the other hand, there was such wide pressure – from the international community and their own society – that they could not have behaved differently."

While acknowledging progress, Stulik says there is still significant institutional resistance to independent anti-corruption courts and investigators. In the case of the former tax chief, Nasirov posted bail on Thursday and was released from prison in advance of the trial. Activists like Eristavi say that doesn't change anything for them, since civil society has shown that it's still a force to be reckoned with.

Ukraine's reformers know that if they are successful, their victory will send a powerful signal to neighboring Russia.

And Kaleniuk of the Anti-Corruption Action Center believes the United States can also learn from her country.

"Ukraine is a case study for Americans on what close ties between politics and business could result in: the abuse of power, large-scale corruption, embezzlement of state funds, abuse of natural resources," she said.

When business and government are too close, Kaleniuk said, it impoverishes citizens and gives rise to authoritarianism.