Accessibility links
The 'Tillerson Is Tired' Meme And Things That Happen In A News Vacuum : Parallels The secretary of state didn't cut short his South Korea stay over the weekend, but an information vacuum meant a lot of people thought he did. 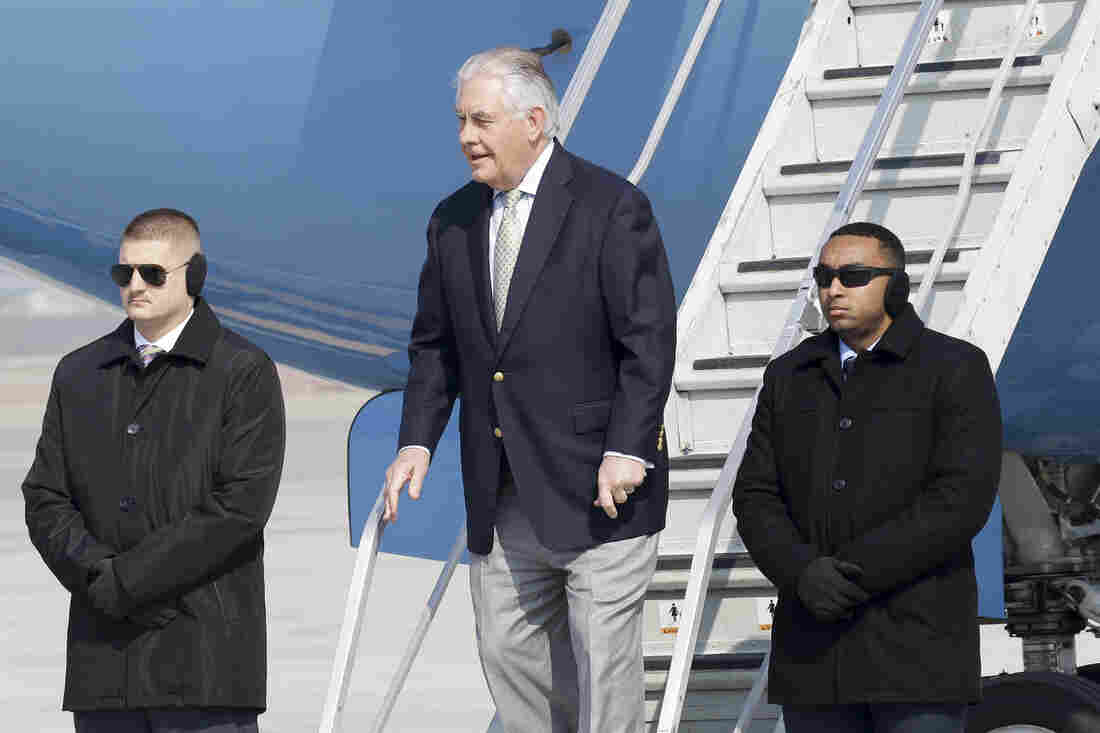 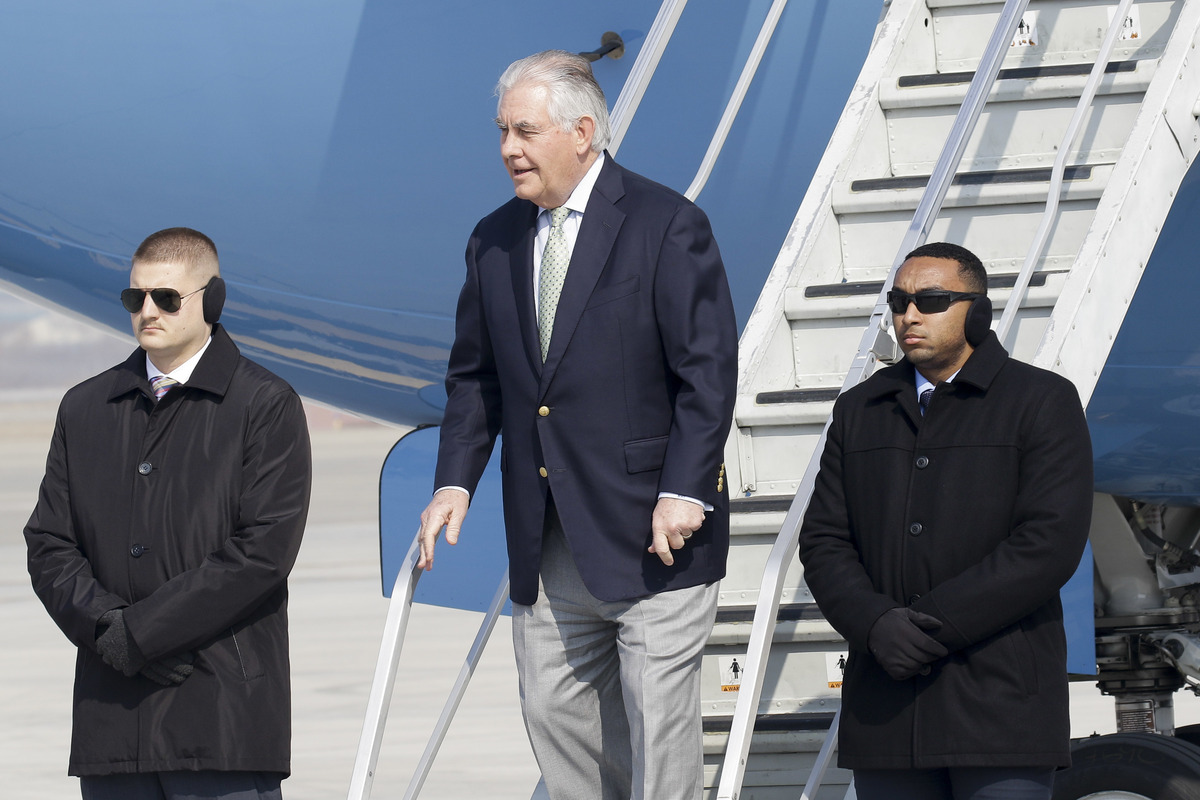 U.S. Secretary of State Rex Tillerson, upon arriving at the Osan Air Base in South Korea last week.

Secretary of State Rex Tillerson's inaugural trip to East Asia was marred by misunderstandings that arguably could have been avoided had Tillerson followed decades-old practice and spoken for himself — to the State Department press corps aboard his plane.

But there was no State Department press corps aboard his plane.

Tillerson had one reporter along — from a conservative-leaning news site who does not cover the State Department. In another break with tradition, the reporter did not offer a pool report to colleagues on the ground.

In both China and South Korea, voices speaking on behalf of Tillerson's hosts filled the news void. And they weren't always story lines that he would want.

One example is from my patch here in Seoul.

In our social media-saturated environment, the South Korea vacuum led to a meme: #TillersonIsTired. It's something that might stick to the new secretary.

Here's what happened: On Friday, when Tillerson stopped in Seoul, the South Korean cable TV pundits griped about the new U.S. secretary of state opting not to have dinner with South Korean leaders. They compared his visit with Tillerson's earlier stop in Japan, where his meetings with the foreign minister were not only longer, he dined with Japanese leaders.

There was never a dinner with South Korean leaders on Tillerson's schedule. He left Seoul Saturday morning for Beijing, just as planned, and not a moment earlier. But the speculation by pundits led to a Korea Herald piece that used the word "shortened," in the context of shorter meetings than in Japan.

And there was an anonymously sourced line in the Korean media report that didn't help Tillerson much: "Seoul officials said the U.S. side opted not to have a meal together, citing the secretary's 'fatigue.'"

Then, the Washington Post's fact-checker, Glenn Kessler, read the report and tweeted the Korea Herald article. In an email to NPR, Kessler explained:

"The reason I tweeted that report from the Korean Herald was precisely to point out how foreign officials can spin the situation if a secretary doesn't have correspondents traveling with him.

"I covered three secretaries over the course of nine years as the Post diplomatic correspondent, and I have never seen such limited press access on such a major trip. I looked it up — when Condi Rice made her first trip to Japan/Korea/China in March 2005, she took at least 12 reporters + camera crew and had 16 press availabilities and interviews over three days."

The State Department cleaned this up on Saturday, saying the reports that Tillerson was too tired to hold extended meetings were untrue, and adding that no joint meal had been scheduled in Seoul. (True.)

It may sound picayune, but all of this confusion argues for exactly what the American diplomatic press wanted: more access to Tillerson. A traveling press pooler, had there been one, could have filled the vacuum by witnessing and reporting a) Tillerson's whereabouts and b) the truth, which is that he did not cut short his Seoul leg and left the following morning, just as planned.

Instead, the State Department silence allowed South Korea's pundits and unnamed "officials" to do the talking. They labeled him as "fatigued," and the inaccurate reports about a trip cut short zoomed around the world before State got around to rebutting them.

The New York Times' David Sanger presents another example of what happened in the vacuum created by the lack of traveling press with Tillerson, and this time, it was with regard to a deadly serious topic — North Korea:

"China tried to box him in by reviving an old proposal for a 'freeze' of North Korea's nuclear and missile programs in return for an American-led freeze of all military exercises with South Korea.

"[Tillerson] accurately noted that a freeze 'would leave North Korea with significant capabilities that would represent a true threat, not just to the region, but to American forces.' But other than that, he never grappled head-on with the Chinese arguments in favor of their proposal — which left the door open for his Chinese counterpart to restate his case in Beijing.

"The Chinese example here is a small one, but it is telling. In past administrations, the State Department would have used the long flight to Asia to give reporters a sense of its arguments and long-term strategy. The secretary of state would have wandered back to the press seats on the plane and offered, on 'background,' the administration's thinking about the major issue of the day."

In the end, the rockiest moments of Tillerson's diplomatic trip to Asia weren't what he said or did, but rather, what he didn't say and didn't do.

"Superpower diplomacy abhors a news vacuum," Sanger notes. "When America's top diplomats create one, adversaries and allies usually fill it with their own narrative of events, their own proposals, their own accounts of encounters with Washington."