Accessibility links
Big Changes And Major Dilemmas Loom In Next Phase Of ISIS War In Syria : Parallels The U.S. considers deploying hundreds more American troops to Syria in the final phase of the war against ISIS — one that could reshape borders and relationships in the Middle East. 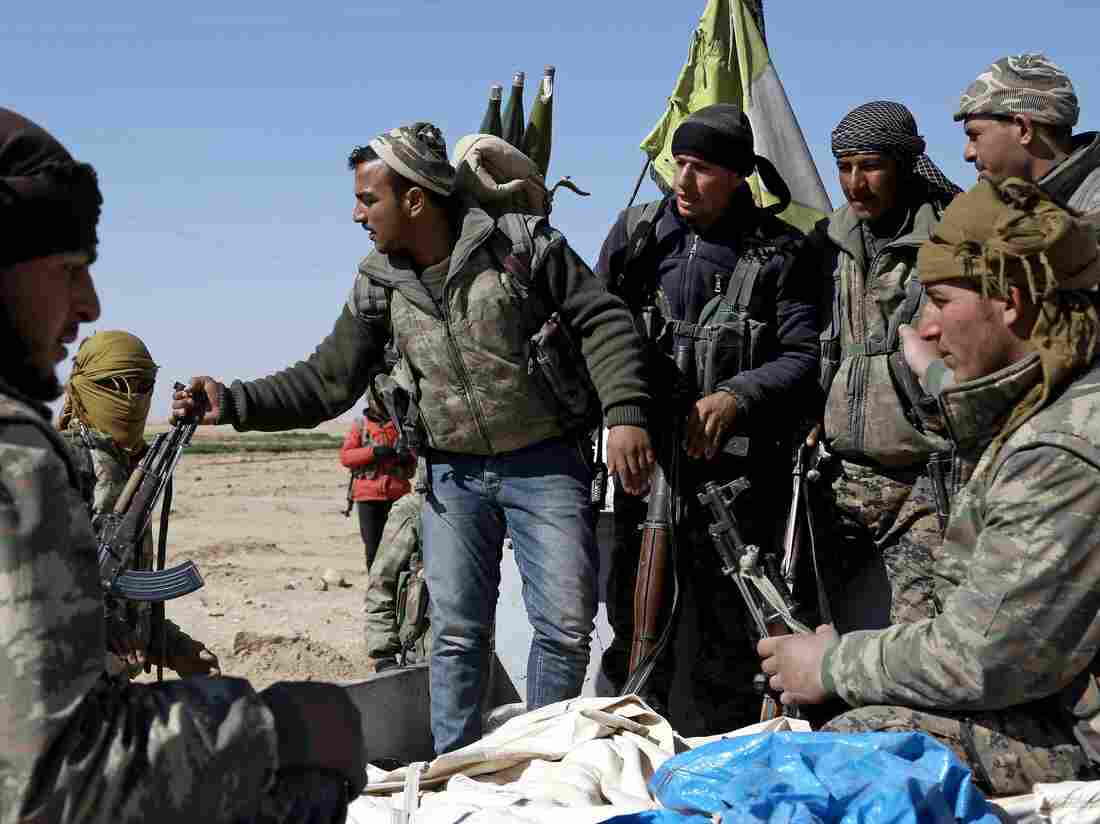 U.S.-backed Syrian Democratic Forces, made up of an alliance of Arab and Kurdish fighters, regroup on the northern outskirts of Deir Ezzor as they advance to encircle the ISIS bastion of Raqqa on Feb. 21. Delil Souleiman/AFP/Getty Images hide caption 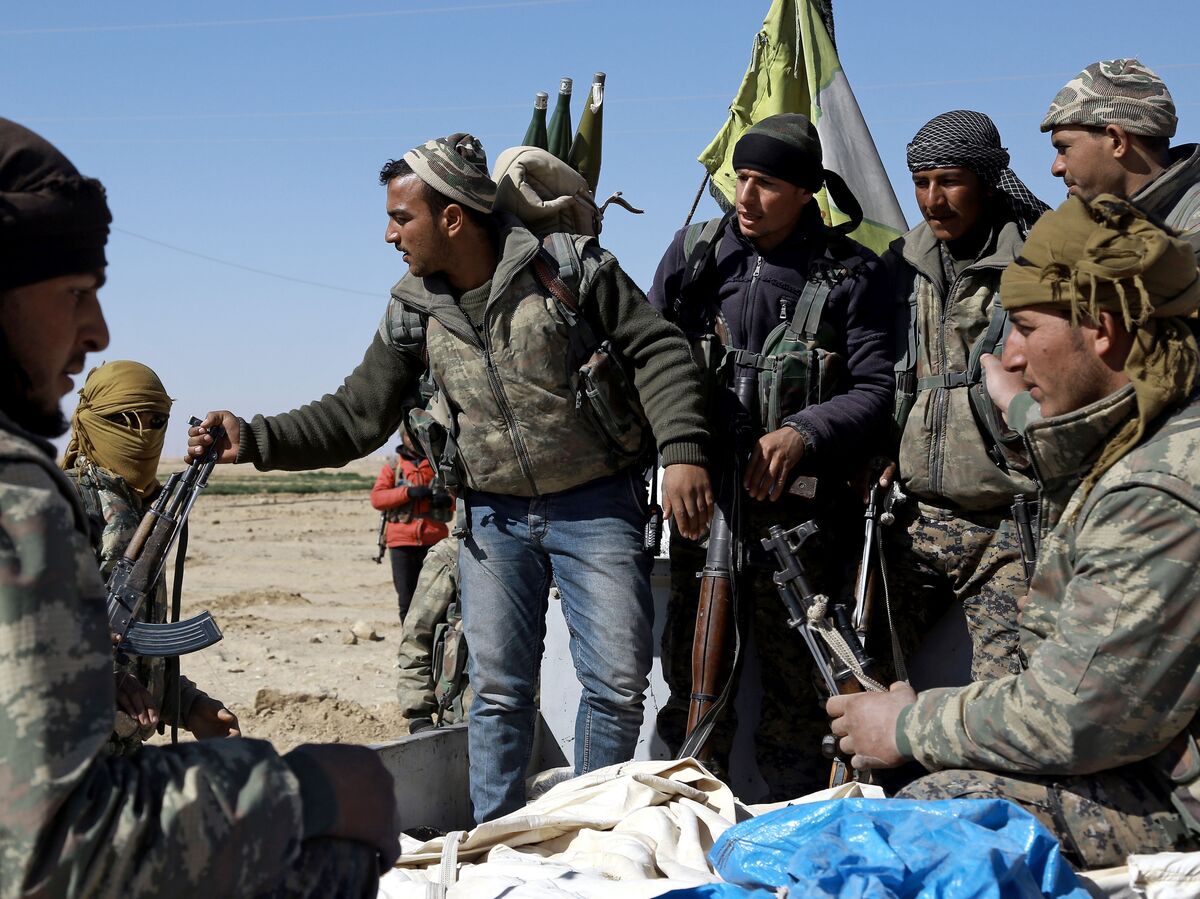 U.S.-backed Syrian Democratic Forces, made up of an alliance of Arab and Kurdish fighters, regroup on the northern outskirts of Deir Ezzor as they advance to encircle the ISIS bastion of Raqqa on Feb. 21.

U.S. Marine artillerymen are now in place on Syrian soil, north of the last stronghold of the Islamic State. A force of local Kurdish and Arab fighters is moving south, continuing to isolate the city of Raqqa.

They're in the opening stages of a major military operation that officials say could last into the fall.

What comes next is expected to have huge implications not only for the fate of ISIS but also for the relationship between Turkey and Russia, as well as the geographic outlines of the future Syrian state.

It will be very complicated.

Sometime next month, following a Turkish referendum that could give more power to President Recep Tayyip Erdogan, the U.S. is expected to take a controversial step: equipping local Arab and Kurdish forces in Syria with small arms, heavy machine guns and other weapons to begin the final battle for Raqqa.

ISIS has been dug in there for years, and has mostly lost its grip on the other major city it controlled — Mosul, in Iraq.

The fight for Raqqa will not only be a difficult military challenge. Its political dimensions are fraught, too: Turkey considers the Kurdish fighters aided by the U.S. to be terrorists. The U.S. says those Kurds are the best fighters on the ground.

Turkish Foreign Minister Mevlut Cavusoglu recently sent a clear message about his country's stance on the Syrian Kurds. "We do not wish any of our allies to stand with terrorist groups," he said.

The U.S. commander overseeing the ISIS fight, Lt. Gen. Stephen Townsend, said the operation in Raqqa will include Kurdish fighters — emphasizing they, too, are Syrian.

The potential pitfall is the Turkish response to increased American support for the Kurds.

After U.S.-backed Kurdish forces captured the Syrian town of Manbij from ISIS last August and then began moving farther north, Turkey launched what it called Operation Euphrates Shield, which pitted Turkish-backed forces against these Kurdish-led forces, as well as against ISIS.

The resulting clashes required U.S. Army Rangers to intervene — including by openly flying American flags from their armored vehicles — to separate the forces. Pentagon officials denied these were "peacekeeping forces" — and struggled to define their mission.

Mostly, they seem to have been there to keep everyone else apart.

"The U.S. military has carved out a new role in Syria, with small numbers of troops now positioned to prevent an escalation of violence among an array of militias and other forces that have converged on an increasingly complex battlefield," Navy Capt. Jeff Davis, a Pentagon spokesman, said earlier this month.

Residents of Manbij said the U.S. presence did calm things down.

"The increase in the number of forces and patrol forces reassured the people of Manbij," said Shervan Darwish, a Kurdish member of the Manbij Military Council. "It was a very welcome step because the threats directed towards Manbij were a source of worry for the people, especially threats by Turkey. The increase of the American presence in the area ... quieted people's fears."

Middle East observers warn, however, that the Turks have the ability to poke the United States if Washington's tactical alliance with disfavored Kurds grows into a stronger political relationship. Ankara could cut off American access to an airbase from which warplanes now support the war in Syria — or deploy more of their own forces to key areas over the border.

"What can the Turks do? Well, they can make life difficult," said Amberin Zaman, a public policy fellow at the Wilson Center.

Even as Washington continues to figure out how to deal with Turkey, another big question involves its Arab allies.

The United States has long pressed for Arab states to participate in the anti-ISIS campaign, but has never been satisfied about their commitments. Jordan has sent some troops into Syria along its shared border, and Saudi Arabia has promised to send ground troops — but has not delivered.

"We are ready to do anything that will eradicate terrorism, anything without limits," he said.

The Turks have said they, too, want to participate in the Raqqa operation — but have yet to talk about troop numbers, officials say. Erdogan has said an anti-government group with which he feels comfortable — the Free Syrian Army — could lead the Raqqa offensive.

Washington's position is not clear; Townsend would not detail the state of negotiations with Middle Eastern allies.

The Turks, meanwhile, have pressed for larger numbers of U.S. ground troops — many thousands — for Syria. But that seems to be a nonstarter. All indications are that President Trump will largely follow the strategy of President Barack Obama: send in U.S. trainers to arm and assist local fighters; allow special operations forces to accompany local combat units and provide airstrikes and surveillance for the local forces.

"American and coalition air power is important in support, but cannot, itself, take the lead on liberating Raqqa and other cities from thousands of entrenched ISIS fighters," wrote Michael O'Hanlon, a defense analyst at the Brookings Institution, in The National Interest. "The solution to this conundrum has to involve providing arms to the Kurds, whether Turkey loves the idea or not."

To move forward on the Raqqa plan, the U.S. is considering sending hundreds more U.S. trainers — and more special operations forces — to Syria in the coming weeks. Defense Secretary James Mattis has yet to sign off on the plan to send those troops to northern Syria, near the town of Kobane. If he does, the total number of U.S. forces in Syria will approach 3,000.

The crowded battlefield is a headache for commanders and policymakers. There are various armed groups, along with Turkish, Russian, Syrian and Iranian-backed Hezbollah forces.

Gen. Joseph Dunford, chairman of the Joint Chiefs of Staff, recently sat down with his Turkish and Russian counterparts to talk about how to handle the situation. One possibility could be carving out zones of operation, so that Russia and Syria would continue operating in areas like Palmyra and the U.S. could focus on Raqqa, defense officials say.

Dunford hinted at such a strategy during a talk last month at the Brookings Institution.

"It's about as complex an environment as it can be," Dunford said. "If you just look, you've got Iran there, you've got Russia there, you have the Syrian regime, obviously; Turkish concerns, Kurdish concerns, Arab concerns, Shia concerns, Sunni concerns. ... What I think is, what you're getting at is, we do need to have a vision of how our military actions set conditions on the ground that actually then become the platform ... to come up with a political solution."

The way ahead for the Trump administration amounts only to a " 'supersize' of the Obama plan," says Jennifer Cafarella of the Institute for the Study of War, which laid out a blueprint last week for the way ahead in Syria. But that isn't enough, she argues.

The sometimes hawkish ISW is known for its work with top U.S. commanders in the Middle East, including Gen. David Petraeus. It supported the 2007 "surge" of American troops in Iraq.

Today, Carafella argues the U.S. is too focused on the anti-terrorism fight and not on a more important counterinsurgency effort that focuses on the population. "We're not winning the fight for popular support," she says.

ISW's report calls for the U.S. to send in some 10,000 combat and support troops to seize a foothold along the Syria-Iraq border and then, with local Arab partners, mount clearing operations northwest toward Raqqa.

The U.S. would set up a no-fly zone and mediate disputes between Turkey and the Kurdish fighters in Syria, according to the ISW paper, which warns that "Syrian Kurdish political aims threaten U.S. interests" — putting the institute in a position close to that of Ankara.

The deployment sounds wildly ambitious, given what officials are saying about the way ahead, and the reluctance of the new president to pour in more troops and money abroad. If the status quo today and the ISW plan are the extreme ends of the American menu for Syria, all indications point to the Trump administration picking the middle course with a "supersize."

The new map of the Middle East

American officials have begun looking down the road to the future of the Syrian state, they tell NPR. Their analysis begins with the reality on the ground: The Russians have propped up Syria's strongman, Bashar Assad, and helped him secure a long stretch of the country in the south and west. The Kurds have two enclaves in the north. And Sunni Arabs are are in control along both the Iraq and Jordanian borders.

Trump administration officials are looking at encouraging some form of "confederation" in Syria once the fighting stops and will press Sunni Arab countries to help rebuild Syria in an effort that would cost hundreds of billions of dollars.

O'Hanlon, of the Brookings Institution, says having "autonomous zones" in a confederation seems to make sense. And he says such an effort would require "some number of American forces" to help monitor the movement of people and impede the movement of arms across the Syria-Turkey border. There would very likely be a need for a long-term Turkish presence as well in northern Syria, he says, because Ankara might want to keep an eye on what it perceives as a potential threat.

"If there is one thing we should have learned by now in the Middle East," O'Hanlon says, "it's that military successes built on weak political foundations won't last — if they can be achieved in the first place."