Accessibility links
For Utah Newlywed, An 'Egregious' Prison Stint In Venezuela : Parallels Joshua Holt, a Mormon, was on his honeymoon in Venezuela last year when he was arrested in an anti-gang operation. He's been in jail since. The U.S. has called for his release on humanitarian grounds. 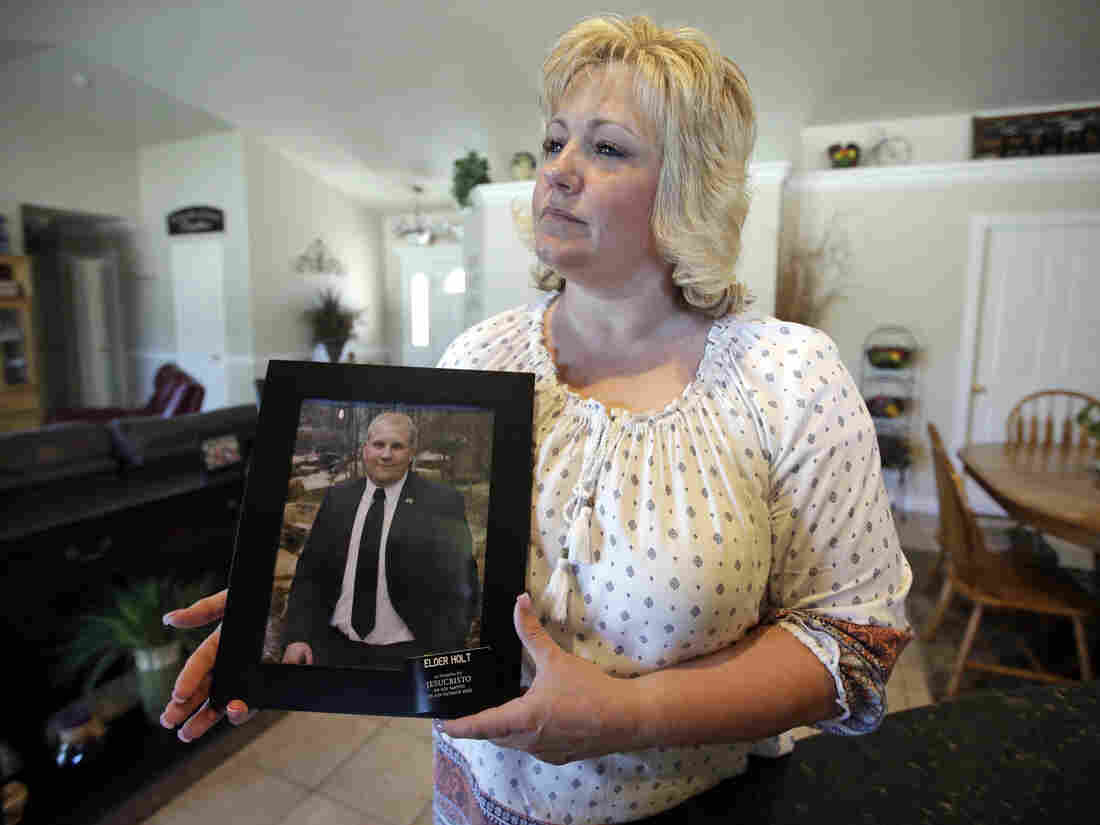 Laurie Holt holds a photograph of her son Joshua Holt, who has been jailed in Venezuela, at her home in Riverton, Utah, in July 2016. "Eventually," she says, "he'll come home and we'll be able to go back to our normal lives. And I can stop crying every night." Rick Bowmer/AP hide caption 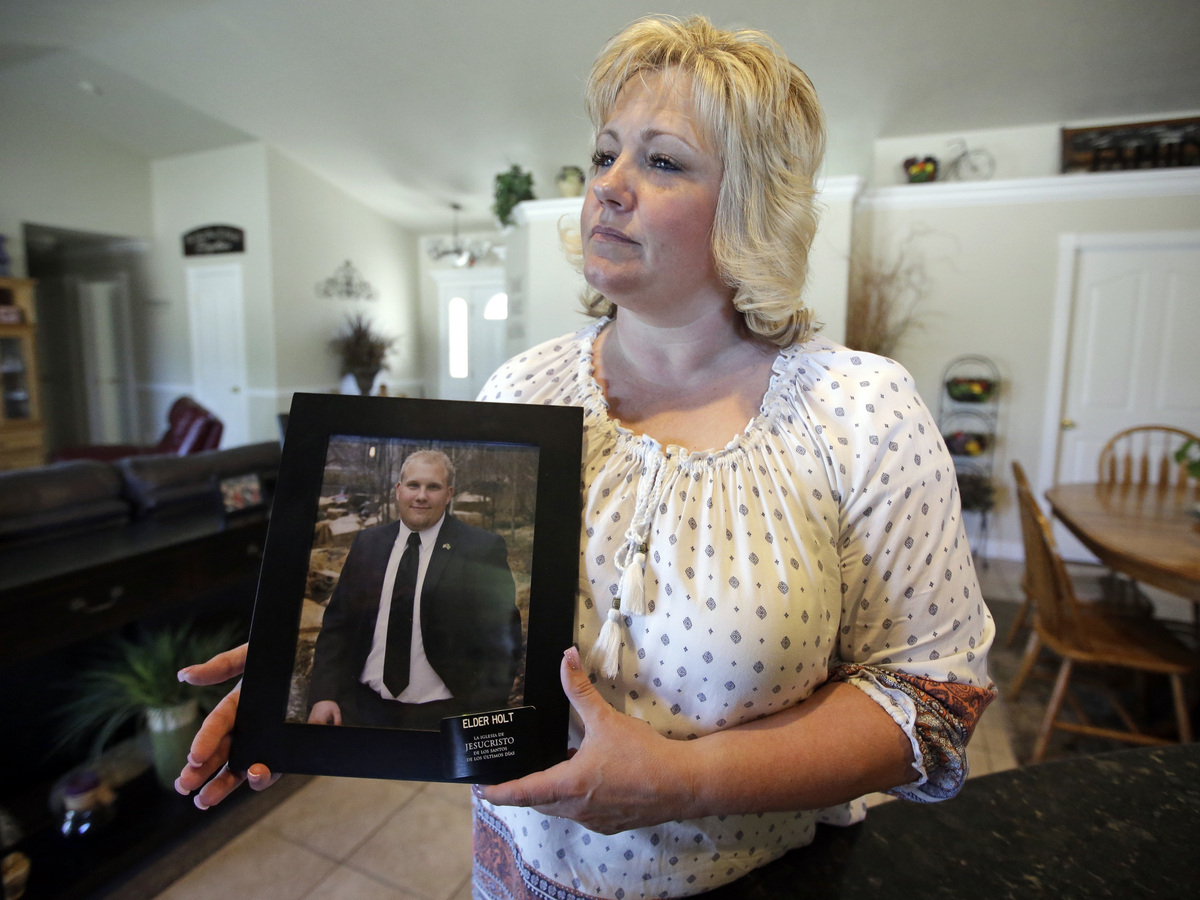 Laurie Holt holds a photograph of her son Joshua Holt, who has been jailed in Venezuela, at her home in Riverton, Utah, in July 2016. "Eventually," she says, "he'll come home and we'll be able to go back to our normal lives. And I can stop crying every night."

Venezuela's deeply unpopular government is holding more than 100 political prisoners — and some legal experts are including an American among them. Utah native Joshua Holt traveled to Venezuela last year to marry his Venezuelan fiancée. But in a bizarre twist, he's ended up behind bars on weapons charges.

An Eagle Scout and a Mormon missionary, Holt, 24, met Thamara Candelo through a religious website. After a whirlwind online romance, Holt and Candelo, a Venezuelan Mormon, agreed to get married in her home country.

Venezuela is plagued by high crime, food shortages and political unrest that President Nicolás Maduro often blames on the United States. Holt's mother, Laurie, says she urged her son not to go.

"I had heard things — that it was dangerous there, that they didn't like the Americans there," she tells NPR via Skype. "And he's like: 'Mom, it's not that bad. Don't worry. I'll be safe.'"

After their honeymoon last year, the couple settled into Candelo's apartment in a housing project on the outskirts of Caracas. They had planned to move to the U.S. with Candelo's two young daughters, and were waiting for approval for her U.S. visa.

But on June 30, an anti-gang police squad burst into Candelo's apartment, where agents claimed to find an AK-47 assault rifle and a grenade. Holt and Candelo were hauled off to jail.

On state television, Interior Minister Gustavo González linked the couple to a paramilitary gang that had recently killed a ruling party politician.

But to some analysts, his evidence seemed thin.

"They don't have a single fingerprint from the arms that match those of my client," says Holt's lawyer, Jeannette Prieto. 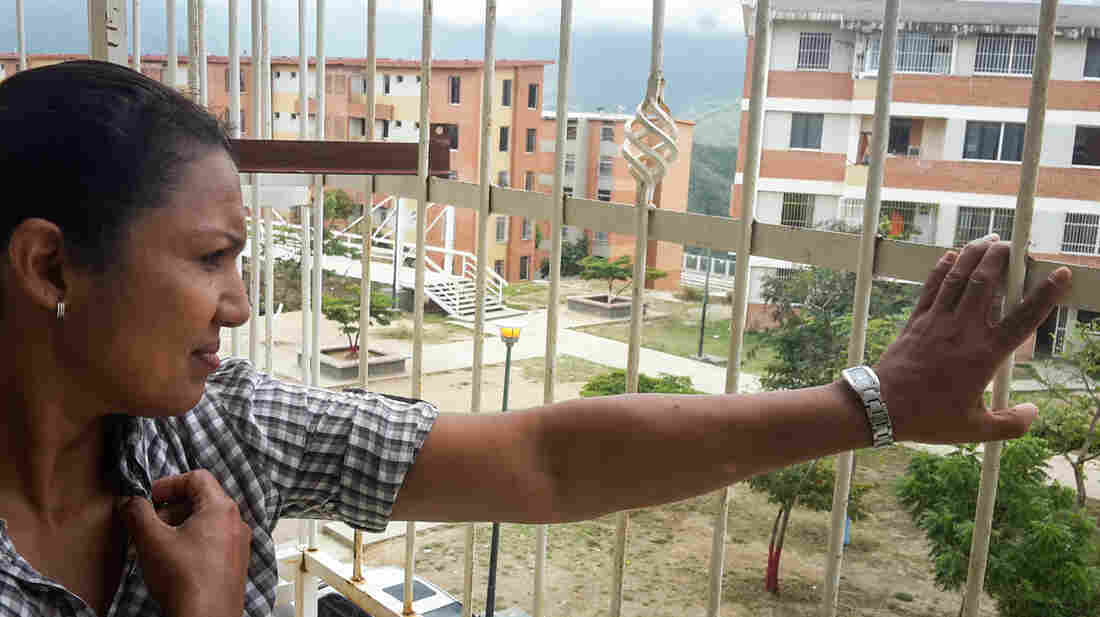 Maria Candelo, whose daughter married John Holt and is now in jail along with him, says she saw police slip weapons into Holt's luggage before the arrests. John Otis for NPR hide caption

Holt's mother-in-law, María Candelo — who was in the couple's apartment on the day of the raid — tells me she saw police slip the weapons into Holt's luggage. She recalls a police agent shouting, "Look what we found!"

This type of legal persecution happens all the time in Venezuela, says Alfredo Romero, who directs Foro Penal, an organization of lawyers that defends political prisoners.

"The executive power systematically has been repressing people and detaining people without any kind of legal justification," Romero says.

Facing waves of protests, the Maduro government arrested more than 5,000 people on what Romero calls trumped-up charges since Maduro's election in 2013. Most were eventually released. Romero believes Holt is being held to justify Maduro's claim that the United States is trying to overthrow his government.

"Everything that can be used to support this propaganda, it's OK for them," he says.

Holt and his wife have now spent nine months in jail without even a preliminary hearing.

On visiting day, María Candelo arrives at the jail with clean clothes and a pot of spaghetti for her daughter and Holt. She says prison food doesn't agree with Holt and he's lost about 60 pounds.

Utah Sen. Orrin Hatch has pressed Holt's case with the State Department, and issued a statement after meeting Jan. 18 with Rex Tillerson, now secretary of state, saying, "What's happening to one of our fellow Utahns in Venezuela is egregious."

William Cocks, a spokesperson for the State Department's Bureau of Consular Affairs, told NPR in a statement that the U.S. embassy in Venezuela and the State Department "are following this case closely." The embassy, Cocks said, "has repeatedly raised concerns about [Holt's] health, the conditions of his detention, and his treatment with Venezuelan authorities. We call on the Venezuelan government to immediately release Joshua Holt on humanitarian grounds."

Venezuelan officials did not respond to NPR's requests for comment.

But she hasn't given up hope.

"Eventually," she says, "he'll come home and we'll be able to go back to our normal lives. And I can stop crying every night."