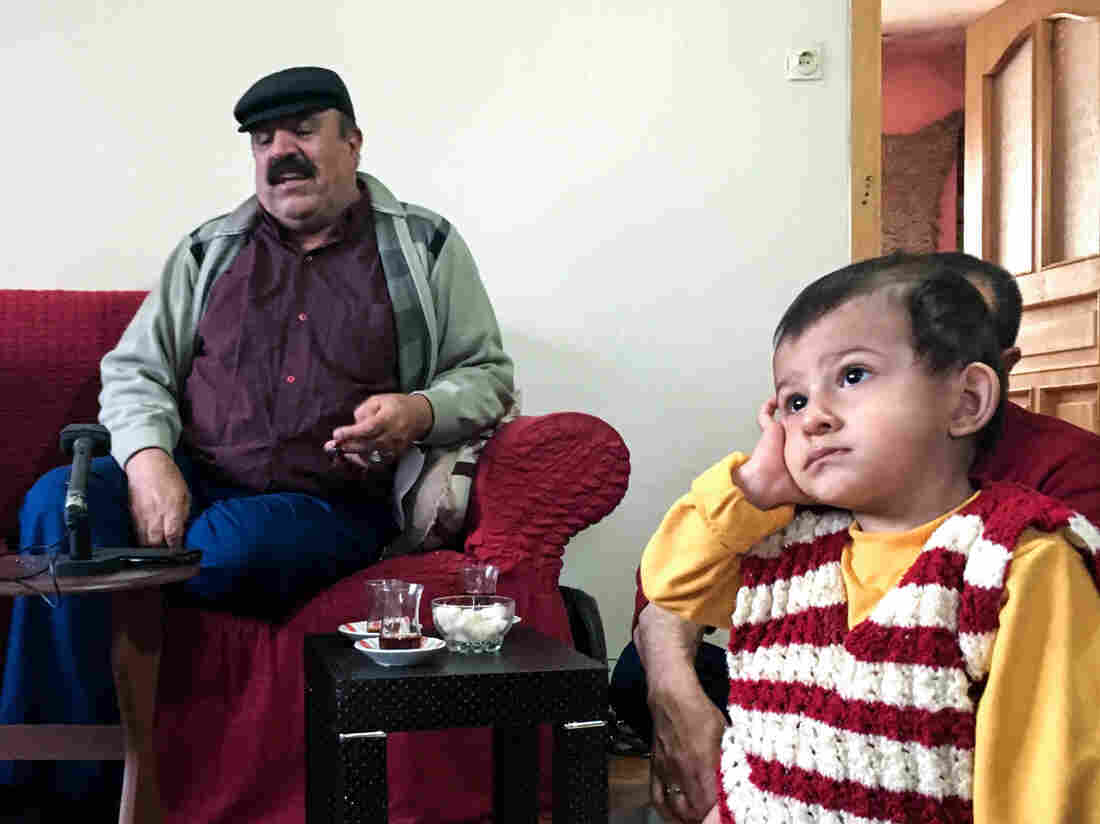 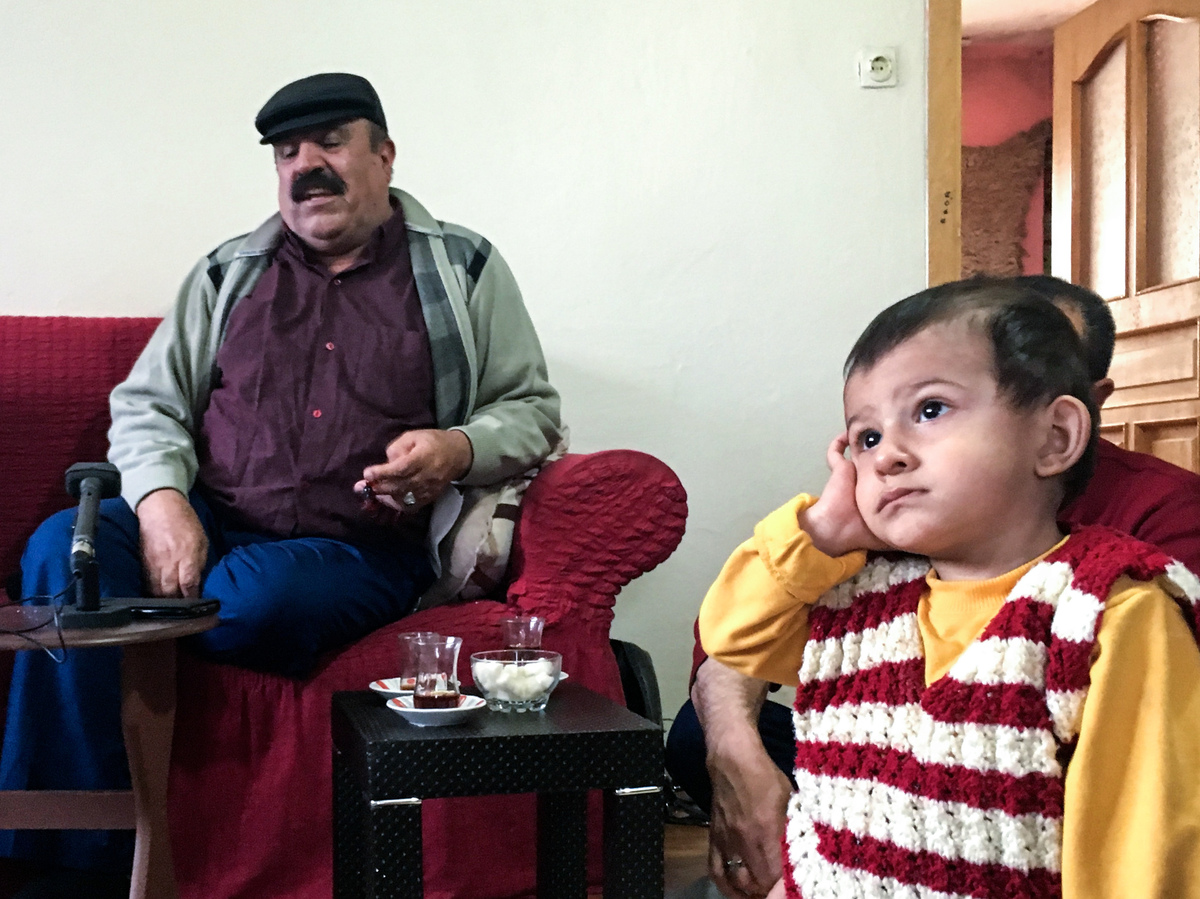 A late March snow descends on a modest farmhouse in central Anatolia. An oil stove hisses away inside, as afternoon gives way to twilight.

A heavyset man with a thick black mustache adjusts his cap, takes a deep breath and fills the room with a piercing, impassioned cry. The small audience settles back for an evening of traditional dengbej singing.

For centuries, dengbej songs served as a combination news bulletin, history lesson and evening's entertainment. Master singers built up large repertoires of songs — and could recite the historical events they describe.

Mistefa Bedevi, and his son, Sakir, are both dengbej singers. Mistefa says he began when he was just 5 years old, more than a half-century ago. "When a singer came, I'd do anything to listen," he says. "If they kicked me out, I'd scramble up to listen at the chimney."

Researcher Argun Cakir with the University of Bristol says it's not an exact comparison, but think of the ancient troubadours, traveling European composers and singers of lyric poetry. Likewise, dengbej singers would travel from town to town, bringing songs about anything from recent local events to epic historical tales to timeless love stories.

"And if it was received positively," Cakir says, "it would become part of the stock repertoire in an area."

The Bedevis are from Van, in Turkey's southeast, and that's what they sing about, though the family moved hundreds of miles away for work nearly three decades ago. Mistefa says he even wrote a dengbej song about the deadly earthquake that killed nearly 600 people in Van in 2011.

The volume is loud, as befits a tradition begun in the days before microphones. Mistefa's singing style is singular — staccato consonants and long, bending vowels, as he unfolds a tale of a long-ago Kurdish fugitive on the run from the Turks and the adventures and betrayals he encounters on the road.

American ethnomusicologist Robert Reigle, who has worked in Turkey for years, came to record this performance by the father-son duo. He's fascinated with the vocal techniques they use, especially variations in timbre — that's basically the color of a tone, separate from its pitch. It's the quality that makes a violin and a trumpet sound different, even if they're playing the same pitch.

"One of the unique things about this style of music from eastern Turkey is that the singer sustains one pitch and then does a melody of timbres," says Reigle. "So he changes the vowels into a sequence of four or five different tone colors."

Sakir's voice is a bit higher pitched and sweeter than his father's. He says when he locks into a song, it transports him to the time and place he's singing about.

These are hard times for the Kurds, Turkey's biggest ethnic minority. Entire neighborhoods have been devastated by military operations against outlawed Kurdish militants — the latest phase of an armed conflict that's nearly 40 years old. Kurdish politicians have been jailed, and mayors of largely Kurdish towns replaced. Efforts to preserve Kurdish culture, like dengbej singing, are also suffering.

Reigle says classic dengbej perfomances were already dying out by the 1960s. Modern communications made such storytelling impractical. Political tensions didn't help: Turkish laws banned the public use of the Kurdish language until the early 1990s. And with Turkish soldiers and civilians being killed in the conflict with Kurdish fighters, many Turks had little sympathy for Kurdish traditions.

Then, in 2012, a little breathing room emerged: The government opened reconciliation talks, and Kurdish culture began to blossom. A House of Dengbej, which had opened a few years earlier in the city of Diyarbakir, flourished. But the talks collapsed and fighting resumed in 2015, and now the House of Dengbej is destroyed.

But then his eyes light up, as his 1-year-old grandson, Mirhat, enters the room.

"My grandson could be another Evdale," he says, naming a famous dengbej master, Evdale Zeynike. "See how he nods his head and dances when we're singing — someday he'll be better than I am, God willing."

It's true — young Mirhat is mimicking the singing, holding his hand to his ear the same way Sakir does when he sings, and bobbing forward and back in a relative's arms as the song goes on.

Dengbej singers have been recorded, so the songs are unlikely to be lost forever. Lately, modern Kurdish singers have taken to incorporating elements of dengbej technique into some of their music. But if the original oral tradition is to survive, it will need more Mirhats in more Kurdish homes, learning firsthand from a dwindling number of master singers.