Accessibility links
Summit Between China's Xi Jinping And President Trump Comes Amid Tensions : Parallels "We worried if we did not take immediate stabilizing measures," a Chinese analyst says, "the relationship could nosedive and pose serious problems for our finances, economy and strategic security." 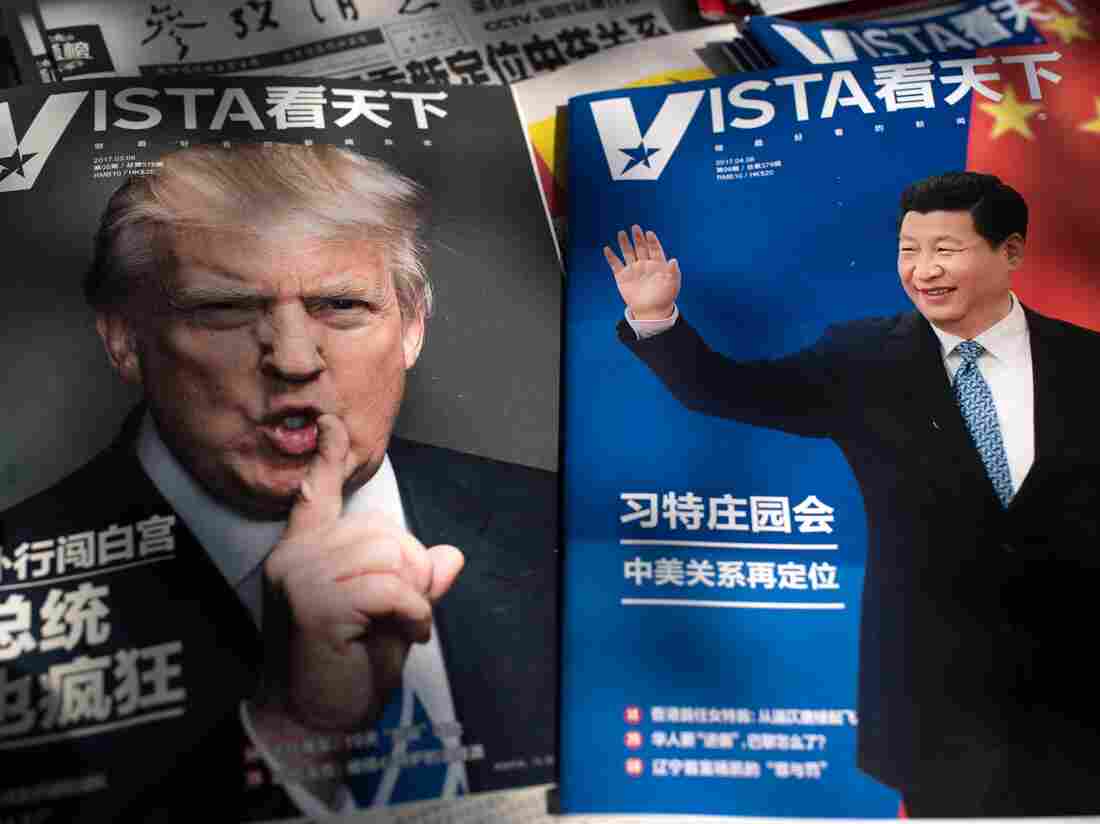 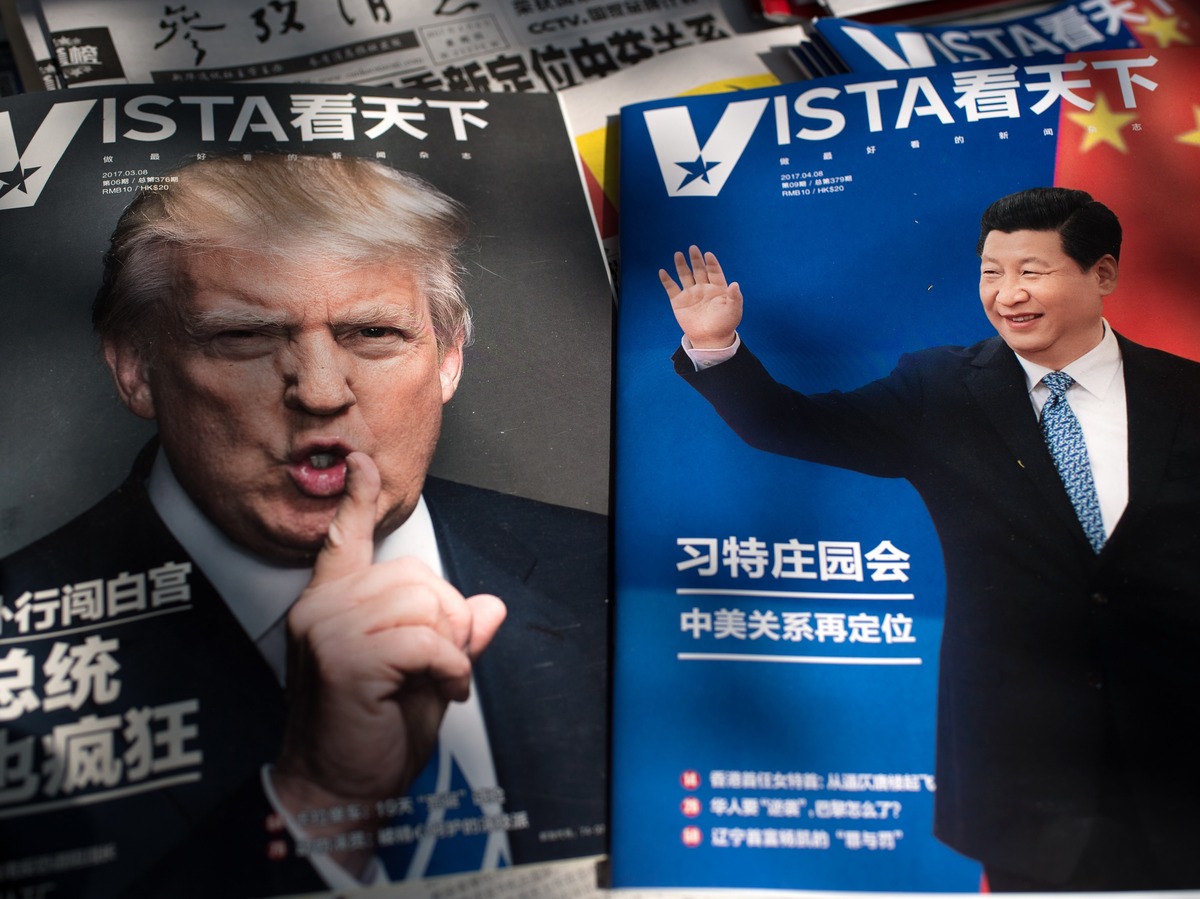 Magazines at a Beijing newsstand show images of President Trump and Chinese President Xi Jinping. The two leaders are meeting at Mar-a-Lago Thursday and Friday.

What President Trump may refer to as "the art of the deal," his guest at Mar-a-Lago on Thursday and Friday — Chinese President Xi Jinping — might call "win-win cooperation."

In this first summit meeting between the two leaders, both sides have things they are willing to give and get. Both will be sizing the other up to see to what extent they can do business with each other.

With Trump Pulling U.S. From Trade Deals, Will China Take Its Place?

With Trump Pulling U.S. From Trade Deals, Will China Take Its Place?

"The Chinese quite like the idea of a deal-maker, because I think they are looking for a deal," says Kerry Brown, a professor of Chinese studies at King's College London.

A grand geopolitical bargain is not in the cards, though, says Shi Yinhong, an international relations expert at People's University in Beijing.

"Both sides have never made, or been willing to make, big concessions on major political issues in order to achieve breakthroughs," he observes.

Shi says China wanted the summit because it was alarmed by Trump's campaign rhetoric, when he talked tough on China.

"We worried that if we did not take immediate stabilizing measures," he says, "the China-U.S. relationship could nosedive and pose serious problems for our finances, economy and strategic security."

Shi also notes that this is a political transition year for China: Xi Jinping is due to get a second five-year term this fall — and that's no time to have a crisis with the U.S.

China has moved quickly to prevent one, Shi believes.

He points out that Trump initially threatened to upgrade unofficial ties with Taiwan, which China considers its territory. But Trump later backed down, during a February phone call with Xi Jinping.

"By prompting the U.S. to affirm its traditional One China policy, and by getting Trump to agree to a summit so early on, China has already won two fights," Shi says.

China has also demonstrated that it wants a greater global role in issues such as climate change and international trade.

By reversing agreements on climate change and pulling the U.S. out of international trade agreements like the Trans-Pacific Partnership, President Trump is ceding leadership to China, says Shanghai-based APCO Worldwide executive James McGregor. But China, he believes, is not fit to lead.

Xi Jinping has spoken in favor of globalization and free trade, and against protectionism, at the World Economic Forum in Davos, Switzerland, and in remarks with German Chancellor Angela Merkel. But back home, policies undercut the rhetoric.

"Xi goes to Davos and talks about the need to open the world and we shouldn't be building walls," says Christopher Balding, an economics professor at Peking University's HSBC Business School in Shenzhen. "And at the same time, in China, they're literally criminalizing VPNs to access Internet servers that are not based in China. So the disconnect between what China says publicly and how they behave in China, when there's a lot less press, is striking."

And while China's president promotes free trade, Balding adds, the government also requires foreign companies to enter into joint ventures with Chinese companies and either forces them to hand over or their technology or simply takes it.

Beijing may not feel it needs to concede much, Brown says, on what may be the summit's most urgent issue: the North Korean nuclear crisis.

"Mr. Trump seems to have very strong opinions about this issue, and he's probably right that China's the one that's going to solve it," Brown says. "But he can't tell them how to solve it. They're going to have to work their way towards doing that themselves."

When China takes on a leadership role, Balding says, it does so out of self-interest. Maintaining stability in North Korea is one example. Climate change is another.

When it comes to clean energy investment and emissions goals, China is leading the world — but China's carbon emissions are equal those of the U.S. and the European Union combined, says UCLA law professor Alex Wang, resulting in levels of air pollution so high, it's become a social stability problem for China's government. Meanwhile, the country continues to build coal-fired power plants.

Wang worries that China might not be comfortable in the role of global climate leader.

"I think one of the fears about what's going on in the U.S., with Trump stepping back from the climate action, is that Chinese leaders may not want to be out there by themselves," he says.

In other areas, Trump administration policies have given China opportunities it may be incapable of seizing.

"To different degrees, Trump has already alienated most of the U.S.'s allies and strategic partners," Shi Yinhong argues. But China's relations with many of these countries, especially in East Asia, also remain tense.

Some analysts argue that President Trump has squandered American soft power and prestige through his support for the use of torture, for example, and his criticism of journalists as purveyors of "fake news." This has emboldened China to swat away criticism of its own domestic politics.

"China does not want to need to defend its value systems or its domestic issues," says Brown. "It feels like it doesn't have to answer to anyone."

Shi Yinhong says the arrival of the Trump administration was not the first signal to Chinese citizens that Western democracies are not as perfect as they might imagine.

The 2008 financial crisis and the U.K.'s decision last year to leave the European Union, Shi says, sent a similar message.

"Western countries and the U.S. have not done a good job with their own domestic economies and politics," he says. "This has substantially, though indirectly, strengthened the Communist Party's power in China."

Brown predicts that Beijing will get more from Trump than it gives, partly because China's leadership has shrewdly judged the U.S. president's character.

"I think that they absolutely have done a wonderful job at reading him," he says. "So I think that they have worked out that he's a conceited man, and the Chinese are very good in the theater of their diplomacy in making people feel important."

He adds that the Chinese have also nimbly used the back channel to Trump provided by his son-in-law, Jared Kushner.

Shi, though, believes that China needs any handle on this administration that it can get.

"China has no other choice," he says. "Since Trump took office, U.S.-China relations have faced a rather dangerous situation. Luckily, China discovered someone they can talk to who has direct access to the president."