Accessibility links
What Is The U.S. Goal In Syria? : Parallels The U.S. has now bombed both main players in the Syrian war: President Bashar Assad's military and the Islamic State. But the Trump administration hasn't spelled out what sort of outcome it's seeking. 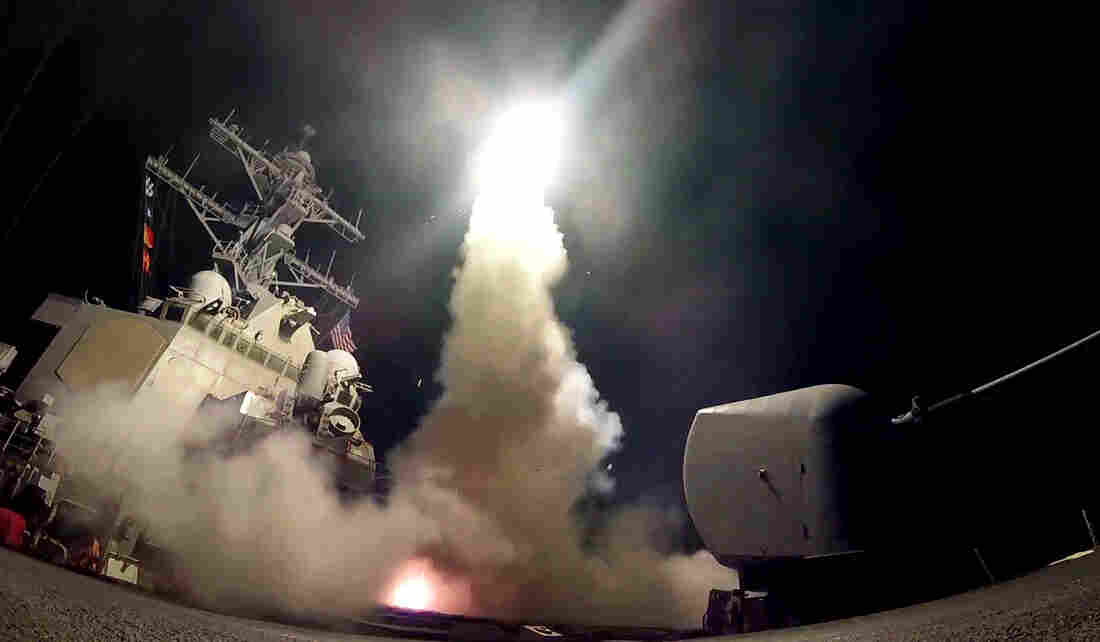 A still from a video released by the U.S. Navy on Thursday evening shows the guided-missile destroyer USS Porter (DDG 78) as it conducts strike operations while in the Mediterranean Sea. U.S. Navy photo by Mass Communication Specialist 3rd Class Ford Williams hide caption 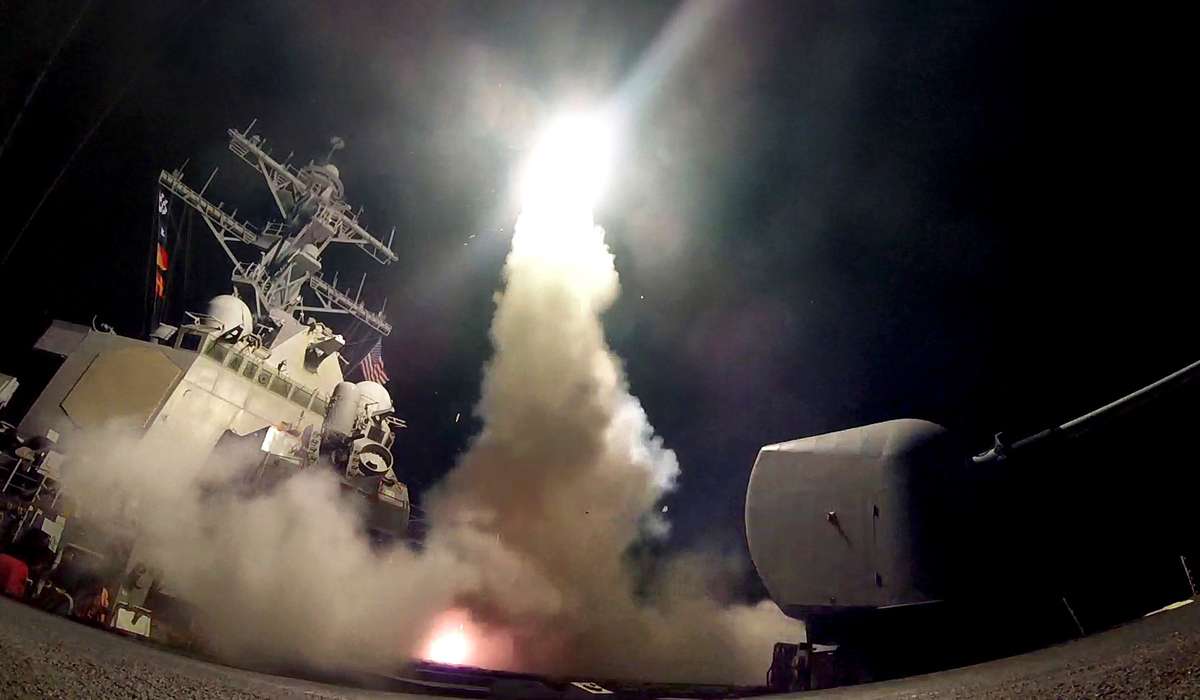 A still from a video released by the U.S. Navy on Thursday evening shows the guided-missile destroyer USS Porter (DDG 78) as it conducts strike operations while in the Mediterranean Sea.

With an attack on a Syrian air base, the United States has now bombed the two main players in Syrian war — President Bashar Assad's military and the Islamic State.

This raises a fundamental question about U.S. aims in the Syrian war: If the two most powerful groups in Syria are both unacceptable, what outcome is the U.S. seeking?

Both Barack Obama and President Trump have sought to limit U.S. involvement in Syria for their own reasons. Yet both have been sucked in and struggled to clearly define their objectives in the messy, complicated war.

Michael O'Hanlon of the Brookings Institution said he supported the strikes.

But, he added, "There is no obvious military step that could follow. What is needed is a political strategy for Syria that squares this circle. Assad must go, yet he will likely stay. That is a paradox that requires creative thinking."

Obama wanted to shrink the U.S. military footprint in Middle East, and resisted pressure to take military action in the wake of Syria's 2011 uprising. He never ordered an attack against the Syrian government, but Obama did launch the bombing campaign against the Islamic State as it rapidly expanded in 2014.

His aim was to defeat ISIS on the battlefield and seek a negotiated political deal with Assad. Obama's air war made progress against ISIS, but peace efforts with Assad went nowhere.

Until this week, Trump's stated goal was to ramp up Obama's bombing campaign against ISIS, while accepting the reality of Assad as Syria's leader. But after Tuesday's apparent chemical weapons attack, Trump said Wednesday, "My attitude toward Syria and Assad has changed very much."

Trump hasn't defined the outcome he seeks. But Secretary of State Rex Tillerson now says Assad should have "no role" in governing Syria — a reversal from the administration position just days earlier.

Many analysts see the U.S. strike, which included 59 Tomahawk missiles fired from two U.S. warships in the eastern Mediterranean, as a one-off response.

"The first thing I thought of was, 'Wow, just like [President] Bill Clinton used to lob cruise missiles at [Iraqi leader] Saddam Hussein in the 1990s," Robert Ford, the former U.S. ambassador to Syria, told NPR. "And Saddam Hussein never changed, and things just went on as they were."

By most assessments, Assad is in his strongest position in several years, though his country keeps spiraling downward in an unending humanitarian crisis.

With help from Russia and Iran, Assad's army has retaken the major cities in the heavily populated western part of the country, while the Islamic State remains on the defensive due to the U.S. bombing campaign in the eastern part. 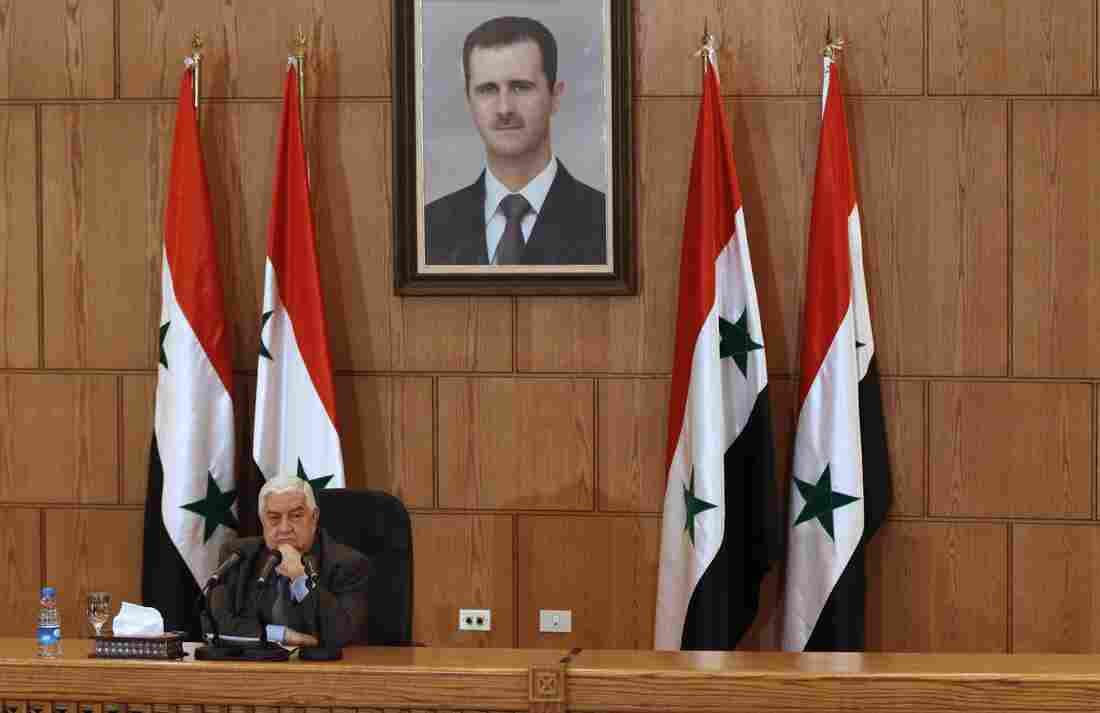 At a press conference in Damascus on Thursday, Syrian Foreign Minister Walid Muallem denied that government forces had used chemical weapons. A portrait of Syrian President Bashar Assad is seen hanging on the wall behind him. Louai Beshara/AFP/Getty Images hide caption

What does this mean for relations with Russia?

U.S.-Russia relations just became even more troubled. Russia is heavily invested in Syria, its only real ally in the Arab world, and it condemned the U.S. military action.

Dmitri Peskov, a spokesman for Russian President Vladimir Putin, said Friday the U.S. strike "deals a significant blow to relations between Russia and America, which are already in a poor state," according to the news agency RIA.

One of the few shared U.S.-Russian aims is the fight against terrorism, and Peskov said the American action "creates a serious obstacle for building an international coalition to fight it and to effectively resist this universal evil."

Tillerson heads to Moscow next week, and the Syrian conflict could supersede the swirling controversy over Russian meddling in last year's U.S. presidential election.

What's the state of battle against the Islamic State?

The U.S. bombing campaign, backed by close to 1,000 U.S. forces on the ground and allied local fighters, has been edging closer to the ISIS headquarters in Raqqa.

The U.S. and its local partners are about 20 miles from the town in north-central Syria, along the Euphrates River. But the Pentagon has warned that it could be a long, hard fight.

Even if ISIS is driven out of Raqqa and a few smaller towns it controls, who would take over? The U.S. doesn't want to occupy it, and the American partners are relatively small factions that aren't well positioned to run the place.

For example, the main U.S. ally in the region is a Kurdish faction, while Raqqa is a mostly Sunni Arab city.

What's happened to the other rebel groups supported by the U.S.?

These moderate opposition groups were prominent in the early days of the uprising. But as the war intensified, they lost ground to the Syrian military and radical Islamist groups. The CIA and the U.S. military have tried to boost the moderate rebels, with no success.

The U.S.-backed rebels are now bit players. They are involved in talks outside of Syria, and are still working with U.S. officials. But right now, they aren't significant actors in the war and don't have a realistic chance of taking on a major political role.

In this environment, Assad argues he's the only plausible option to lead the country. Otherwise, he claims, Syria would be overtaken by a terrorist group like ISIS.

What are the prospects for ending the Syrian war?

Periodic cease-fire talks in Kazakhstan have failed to stop the bloodletting. Political negotiations in Geneva have also proved futile, getting bogged down on the question of Assad's future role.

Spoiler alert: Assad says he must stay; opponents say he must go.

If the U.S. and its allies drive ISIS out of Raqqa and other cities, that could alter the trajectory of the war, but such a blow is likely months away at minimum, according to analysts.

And if the U.S. strike against Assad's military was just a one-time event, the impact will probably be limited.