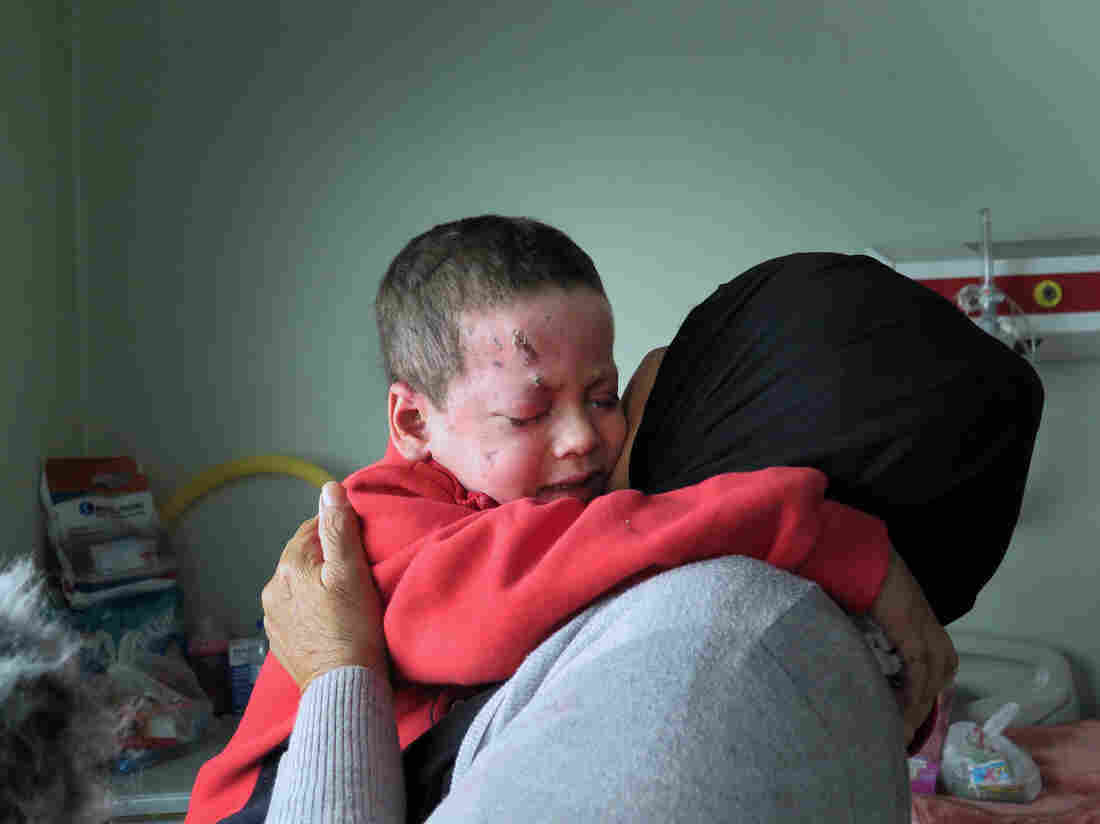 Aliya Ali holds her granddaughter Hawra' in an Irbil hospital where she is being treated. Four-year-old Hawra' was wounded in a U.S. airstrike in Mosul, Iraq, that killed her mother, one of an estimated 150 civilians who died. Jane Arraf/NPR hide caption 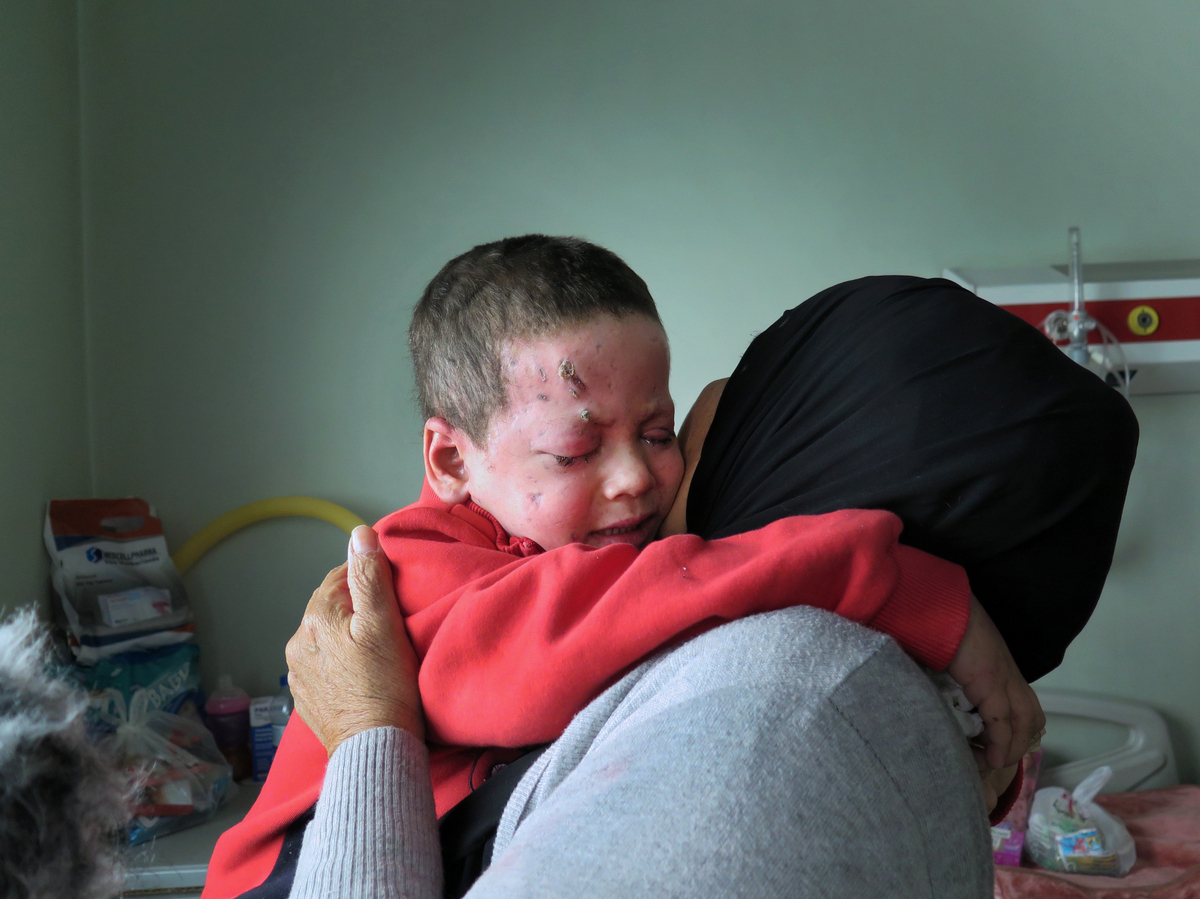 Aliya Ali holds her granddaughter Hawra' in an Irbil hospital where she is being treated. Four-year-old Hawra' was wounded in a U.S. airstrike in Mosul, Iraq, that killed her mother, one of an estimated 150 civilians who died.

In a hospital in Irbil, Iraq, 4-year-old Hawra' is briefly distracted by a new pink hat and a big stuffed toy. But soon she goes back to calling for her mother — her cries filling the hospital room.

"Your mother is in Mosul getting treatment," her grandmother, Aliya Ali, assures her in a singsong voice. "We'll go there," she tells the little girl, before turning to admit that the only thing she can do is lie.

Hawra's mother survived for three days half-buried in the rubble of a house after a U.S. airstrike on March 17 in their neighborhood in Mosul Jadidah. She died there.

Hawra' was thrown through a window. She landed in the neighbors' yard, bleeding and badly burned with shards of glass in her eyes. Her plastic boot had melted into her leg. She still can't open her eyes and will need another operation to be able to see again.

Her father, Ala'a Hassan, was a few doors away. When the fighting let up, he carried Hawra' to safety. He says he tried to rescue his wife. But fighting between ISIS and security forces raged around them.

"I tried to go and help her but my mother was in shock and there was gunfire so I couldn't," he says. "More than once I tried to help her."

The grandmother says Hawra's skin was burned black "like charcoal." The only thing they had to feed her was flour mixed with water.

When Hassan did eventually manage to leave for a few minutes to try to rescue his wife, he went through the holes in the walls between houses that ISIS had forced Mosul residents to create so ISIS fighters could move around without being seen.

Hassan, 26, worked as a photographer before ISIS made him close his shop. He and his mother say there were only a few ISIS fighters in their neighborhood. He says all the families were both terrified of ISIS and deeply afraid of being hit by an airstrike.

"We have learned this about war," Hassan says. "In the cities you can't use airstrikes, you have to use helicopters. I called the Iraqi army many times to ask them to send helicopters, but the people I talked to said it wasn't their decision."

The U.S. Defense Department acknowledges that it launched the airstrikes and says it will conclude an investigation by the end of April. Investigators are trying to determine whether there were secondary explosions from bombs laid by ISIS that caused houses to collapse. While Iraqi special forces requested the U.S. strike, it is up to American commanders to approve the requests under regulations designed, in part, to avoid civilian casualties.

The death toll is believed to be more than 150 civilians — one of the highest in a U.S. airstrike in the war against ISIS. Iraqi commanders say they didn't know that dozens of civilians were packed into each house.

"We didn't know there were this number of people in the houses," Maj. Gen. Najem Abdullah al-Jabouri, head of the Ninevah Operations Command coordinating the battle, told NPR. "This is the last chance for ISIS — it drives people into houses and puts snipers on the roof so we will hit them and many people will be killed. That puts pressure on politicians to stop the battle — this is their end goal."

Hassan says five families had taken refuge in his uncle's house, which had a shelter.

"Three times we tried to leave and ISIS sent us back," he says. "They fired in the air and in the end they said if you try to leave we will hang you."

In some cases, the blasts wiped out almost entire families.

In another ward of a Kurdish government hospital in Irbil where the International Committee of the Red Cross treats the most badly wounded from Mosul, truck driver Ali Thanoun lies in a bed with his arms bandaged and his leg in traction. 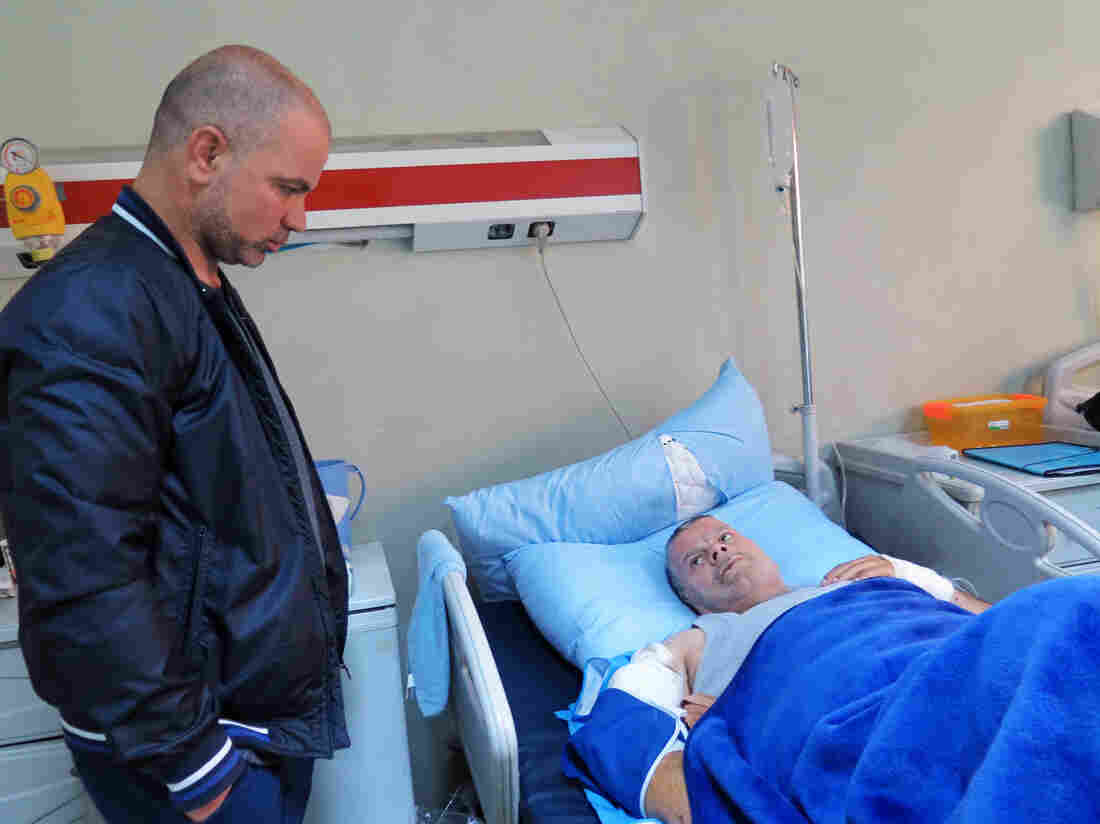 Mubashar Thanoun with his brother Ali, who was wounded in a U.S. airstrike in Mosul on March 17. Mubashar dug Ali out of the rubble of a collapsed building. He hasn't told him yet that his entire family died in the airstrike. Jane Arraf/NPR hide caption 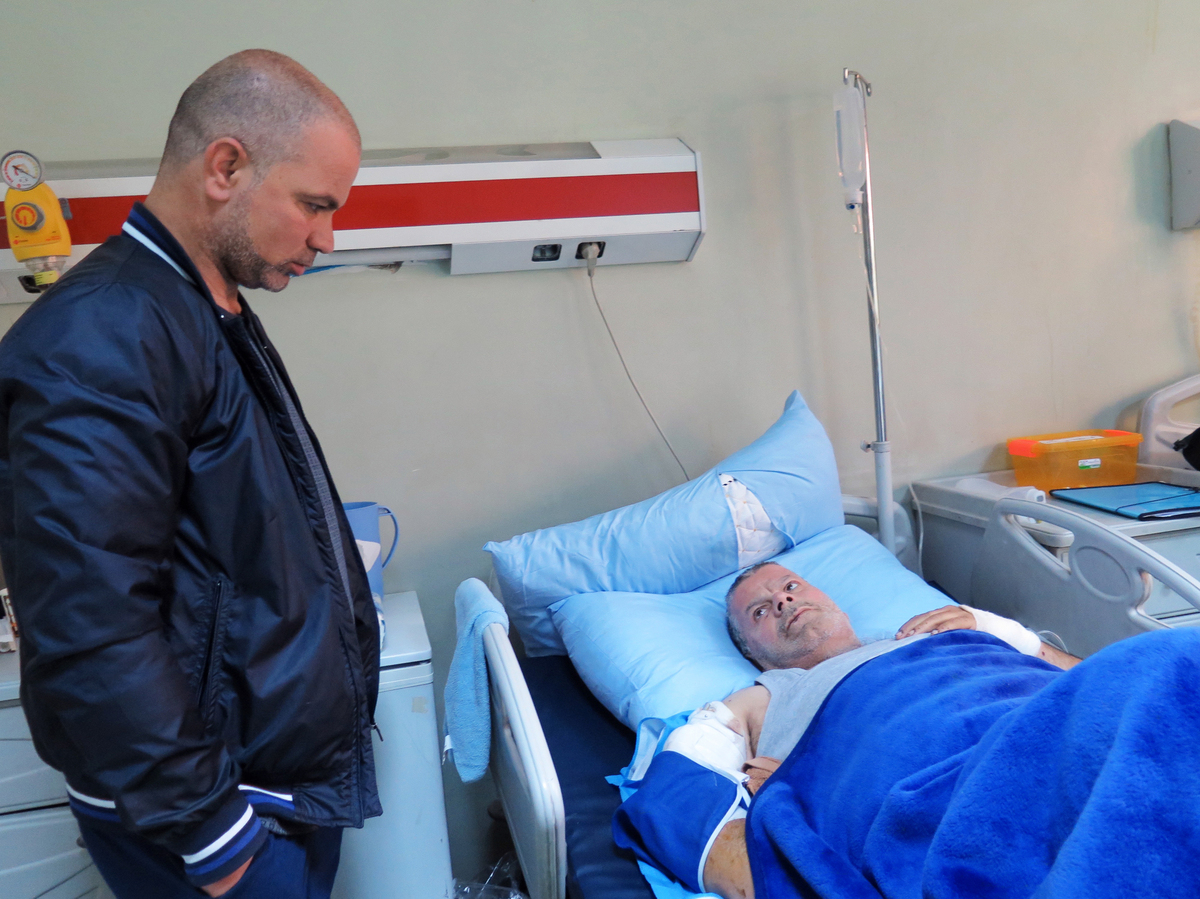 Mubashar Thanoun with his brother Ali, who was wounded in a U.S. airstrike in Mosul on March 17. Mubashar dug Ali out of the rubble of a collapsed building. He hasn't told him yet that his entire family died in the airstrike.

His brother Mubashar asks a nurse for clean sheets and agrees to talk in the hallway, where his brother can't hear.

Ali doesn't know yet that his two wives and all of his seven children were killed. In the house where they were sheltering, 31 people were killed.

Mubashar says he and his family moved from house to house as ISIS fighters herded them deeper into ISIS-held areas. He was in another area when the airstrike hit, and it was two days before Iraqi security forces let him go to the site of the blast. He ran shouting for his brothers.

He finally heard Ali's voice under the rubble.

"He said: 'Are you coming to save me? Before there was ISIS and the army and I shouted and no one helped. You are going to abandon me like the others.' He told me: 'Either get me out or kill me,' " Mubashar recalls.

Ali had survived by drinking one or two drops of saline nasal solution he had in his pocket until it was gone. Another brother, Adel, was killed in the airstrike.

Mubashar says he plans to tell Ali "gradually," while he is still in the hospital, that his family is gone.

"I don't know if his heart can take all the sorrow that is coming," he says. "I worry he will hate me because I saved him to live the rest of his life alone without his family."