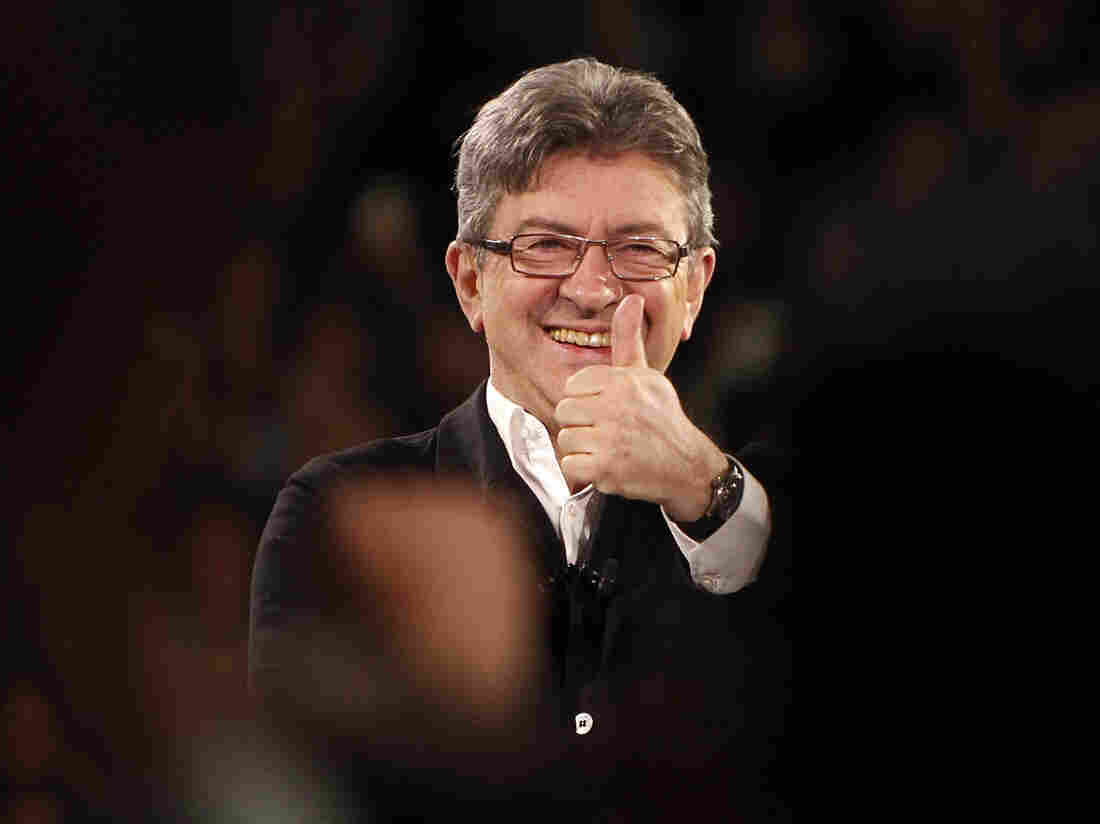 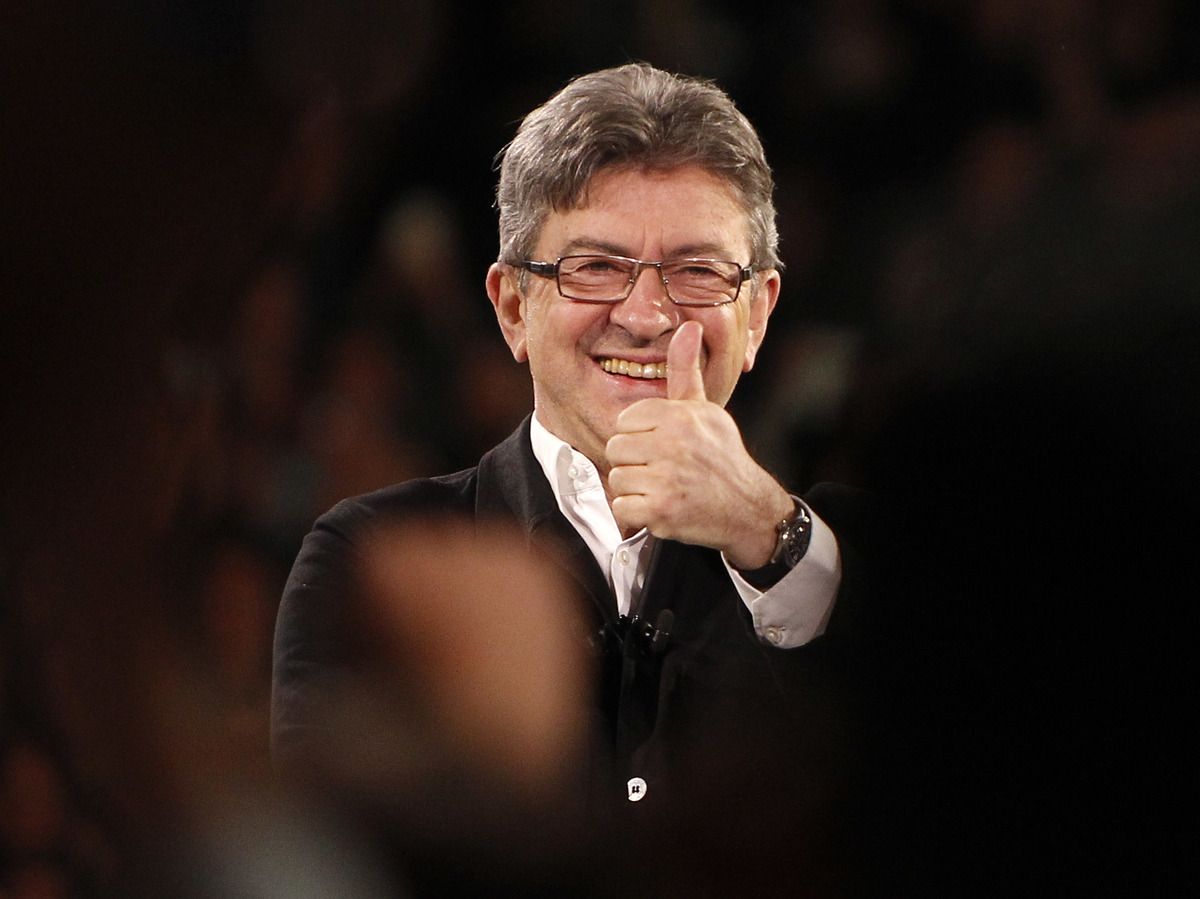 Jean-Luc Melenchon likes surprising even his own supporters.

Last week, thousands waited to hear the 65-year-old, brash, charismatic leftist speak inside the Grand Palais in the northern French city of Lille.

But first he dashed outside to a balcony overlooking an overflow crowd huddled around a giant TV screen.

"I didn't want to go inside without greeting you!" Melenchon, clad in a navy-blue utility jacket, declared, as his supporters cheered and chanted "Resistance!"

"It's the first time I can listen to a politician without getting bored," said 30-year-old Joanna Estime, who spent years ignoring French politics but now campaigns for Melenchon.

A couple of months ago, Melenchon, whose party is called La France Insoumise ("Untamed France"), did not seem like a serious contender for president.

But the "French Bernie Sanders," as he's sometimes been called, is shaking up the French presidential election with his promises to stand up for the little guy. He's surging in the polls just a week before the first round of voting — running even or just ahead of Francois Fillon, the conservative candidate who has been hurt by a corruption scandal. 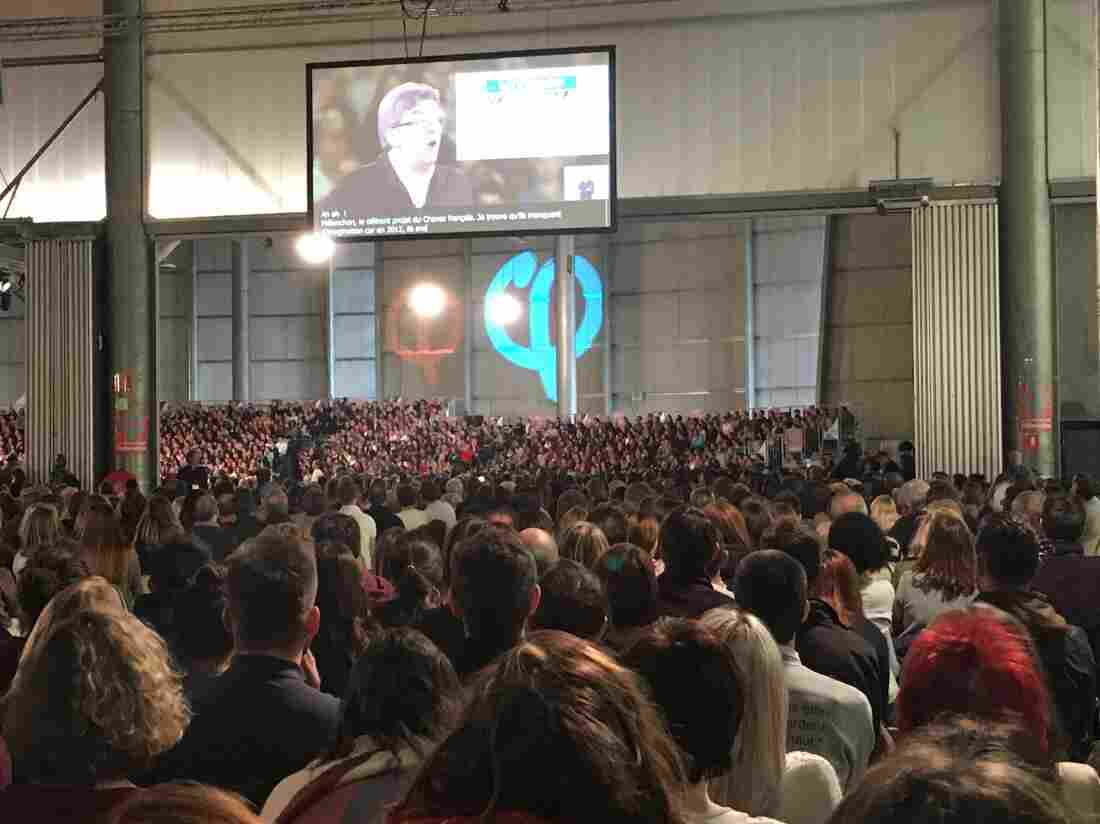 Supporters of hard-left candidate Jean-Luc Melenchon listen to his speech at the Grand Palais in the northern French city of Lille. Joanna Kakissis for NPR hide caption 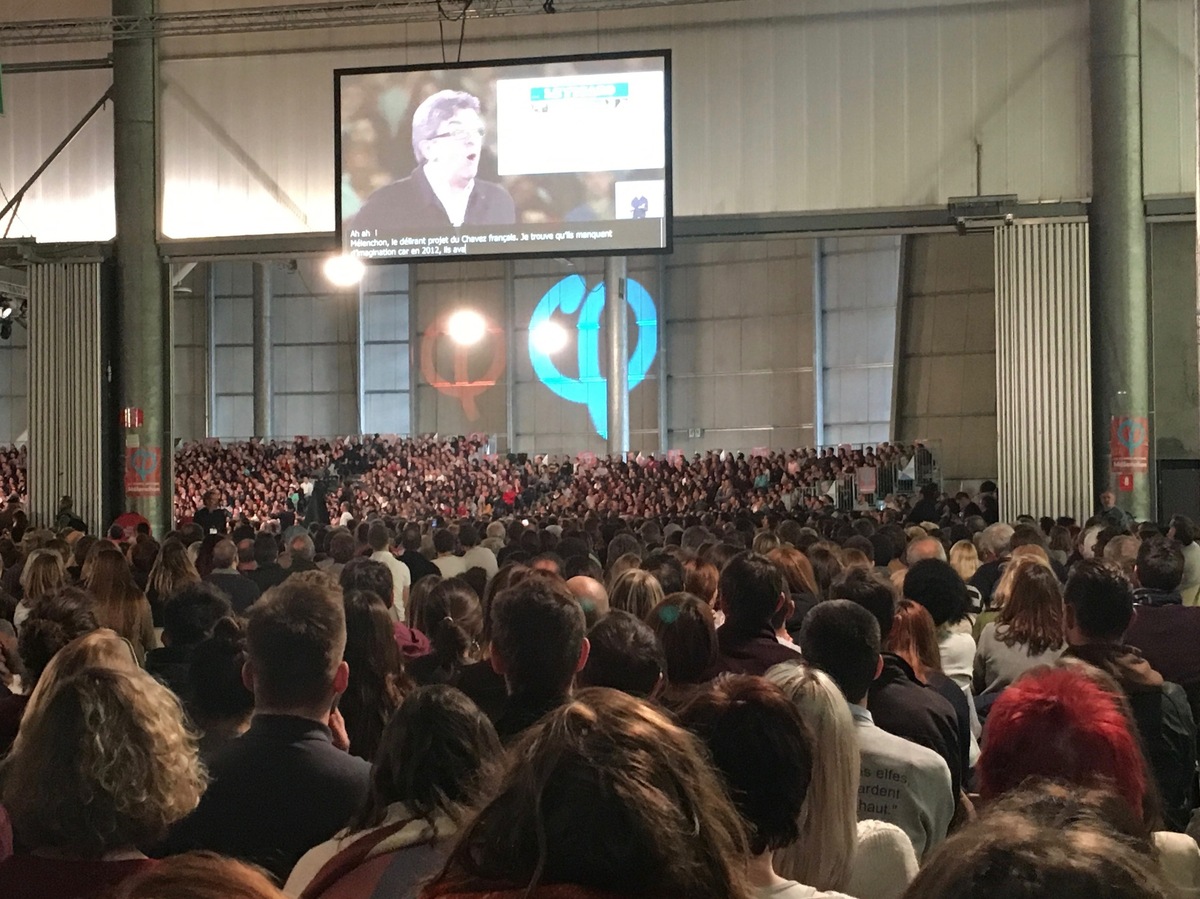 Supporters of hard-left candidate Jean-Luc Melenchon listen to his speech at the Grand Palais in the northern French city of Lille.

Mathiot says Melenchon has won over voters who are angry with a political system that they believe has fueled economic inequality. They like Melenchon's power-to-the-people campaign messages and honest, funny debate performances — even if his ideas are extreme.

He wants to renegotiate European Union treaties and withdraw France from institutions such as NATO and the International Monetary Fund, which he associates with globalized capitalism.

"For a lot of voters, he is the only leftist candidate," Mathiot says, since the Socialists have imploded after Francois Hollande's unpopular presidency.

Melenchon has reached out to young voters in non-traditional ways.

And Melenchon kicked off his campaign in February by appearing in two places at once — in the flesh in Lyon, and as a 3-D hologram more than 300 miles away — in Paris. He repeated the hologram effect again in Lille, transporting himself to six more locations, including Reunion Island in the Indian Ocean.

It's a hit, so he's planning to do it again this week.

"He's a politician since the '80s," Mathiot says. "So he's a very old politician, but he's very modern in his political way of life. So it's not a question of age, of political experience. For lots of voters, and especially young voters, he's a new politician."

Antoine Villemin, a 20-year-old marketing student from Lille, says he's among the 30 percent of French voters who are still undecided.

He says he enjoys Melenchon's holograms and witty campaign videos on YouTube.

"But what I like in Jean-Luc Melenchon is that his speech is the same for almost 20 years now," he says.

Villemin says he especially likes that Melenchon has promised to relieve tax burdens on France's beleaguered middle class and hike taxes on the super-rich.

It's a message that's also resonated in Faches-Thumesnil, a depressed suburb of Lille where the unemployment rate is 14 percent, four times higher than the national average.

It was once a stronghold of France's Socialists. But voters like Malika Allamaachaoui have switched to Melenchon.

"I'm done with the Socialists," says Allamaachaoui, a 48-year-old French-Moroccan mother of five. "My mom only has a small pension. She barely gets by. If we don't do something, it's going to be the same for our children."

I meet Allamaachaoui as she's stocking up on rice and canned tomatoes at a "social supermarket," a grocery for those who make less than 10 euros a day and where items are discounted by up to 90 percent. It serves about 1,500 people, says Emilie Morell, the supermarket's accountant.

But Melenchon hasn't managed to sway everyone here.

Laura Terrier, a 35-year-old assistant for developmentally disabled children, is a longtime leftist voter who now finds herself struggling to choose a candidate.

As she stands in line at the checkout line, she tells me that she likes Melenchon's ideas but she's also been swayed by far-right candidate Marine Le Pen.

"I will not vote for Le Pen because of the racism," Terriers says. "But it is the only thing that keeps me from voting for her."

Aurelien Bouchez, a 23-year-old who works in retail, says he cannot support Le Pen or Macron.

He has not given up hope that Melenchon will make the May 7 run-off.

"I like the idea of a big change, a complete change," he says. "Because even though I'm young, I've studied history, I see what's happened before and where it's gotten us."