Accessibility links
As Iraqi Forces Encircle Mosul, ISIS Unleashes New Level Of Brutality On Civilians : Parallels More than 300,000 civilians are still trapped in northern Iraq's Mosul. ISIS has kept them there as human shields to prevent the U.S. and Iraq from launching airstrikes and mortars against them. 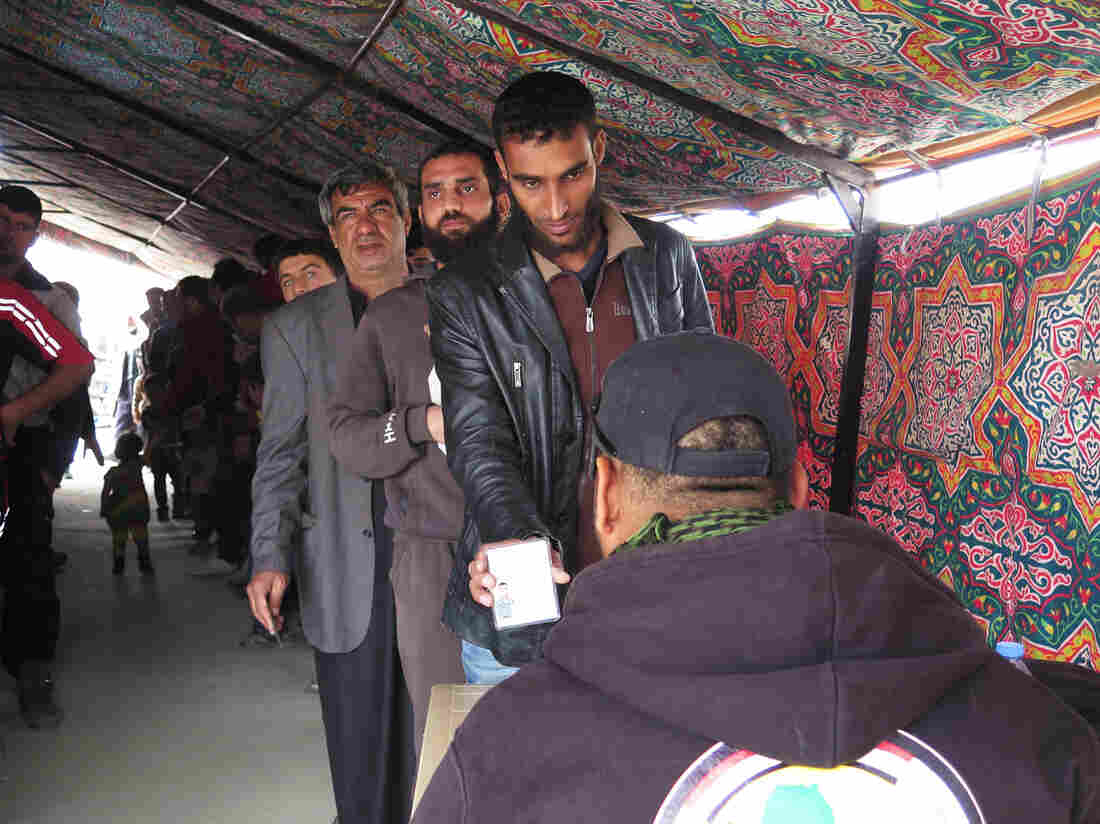 Iraqi civilians evacuated from fighting in Mosul hand their IDs to a member of Iraqi special forces to check if they're on a list of suspected ISIS members. U.S.-backed Iraqi forces have been fighting ISIS in the city for six months and more than 300,000 civilians are still trapped by the fighting. Jane Arraf/NPR hide caption 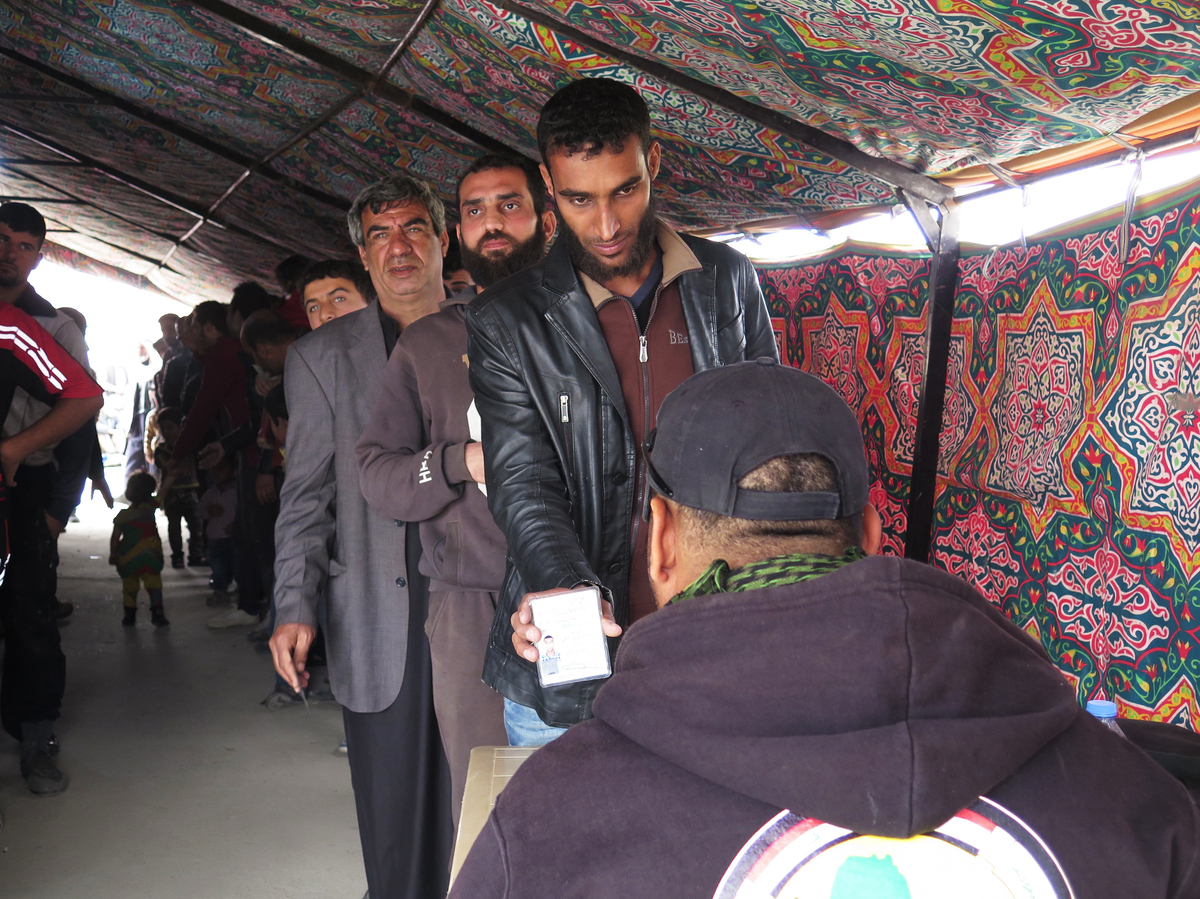 Iraqi civilians evacuated from fighting in Mosul hand their IDs to a member of Iraqi special forces to check if they're on a list of suspected ISIS members. U.S.-backed Iraqi forces have been fighting ISIS in the city for six months and more than 300,000 civilians are still trapped by the fighting.

An Iraqi army truck pulls up to an abandoned gas station on the edge of Mosul in northern Iraq.

Many say that as Iraqi forces close in on the remaining ISIS-held neighborhoods, ISIS has become increasingly brutal toward the civilians they are using as human shields.

Omar, a high school physical education teacher, says he watched from the window of his house on the corner near a girl's school in the al-Mutahin neighborhood one day last week as ISIS fighters lay in wait for civilians trying to reach the safety of the Iraqi army.

He says the families told the fighters they were trying to leave because they had no food left.

"The fighters told them, 'You are dogs — you are going to the rawafid'" — a derogatory term for Shiite Muslims. "God strike me down if I'm lying," Omar says. "They shot seven people in the head. And then they took the people's cars and left. "

Most civilians fleeing Mosul, including Omar, asked that their last names not be used. They are not convinced ISIS won't come back.

Omar says female ISIS members gathered the women to search them for gold, money and documents.

ISIS beats men — but for women trying to escape, there's a special punishment: "There was a woman who was searching them and the same woman was biting them — I swear to God she was biting them on their arms," he says.

Mosul residents have now lived for three years under ISIS rule. At first, many Sunni residents welcomed the group — as repressive as it was, for some the corrupt government and discredited Iraqi security forces were worse. 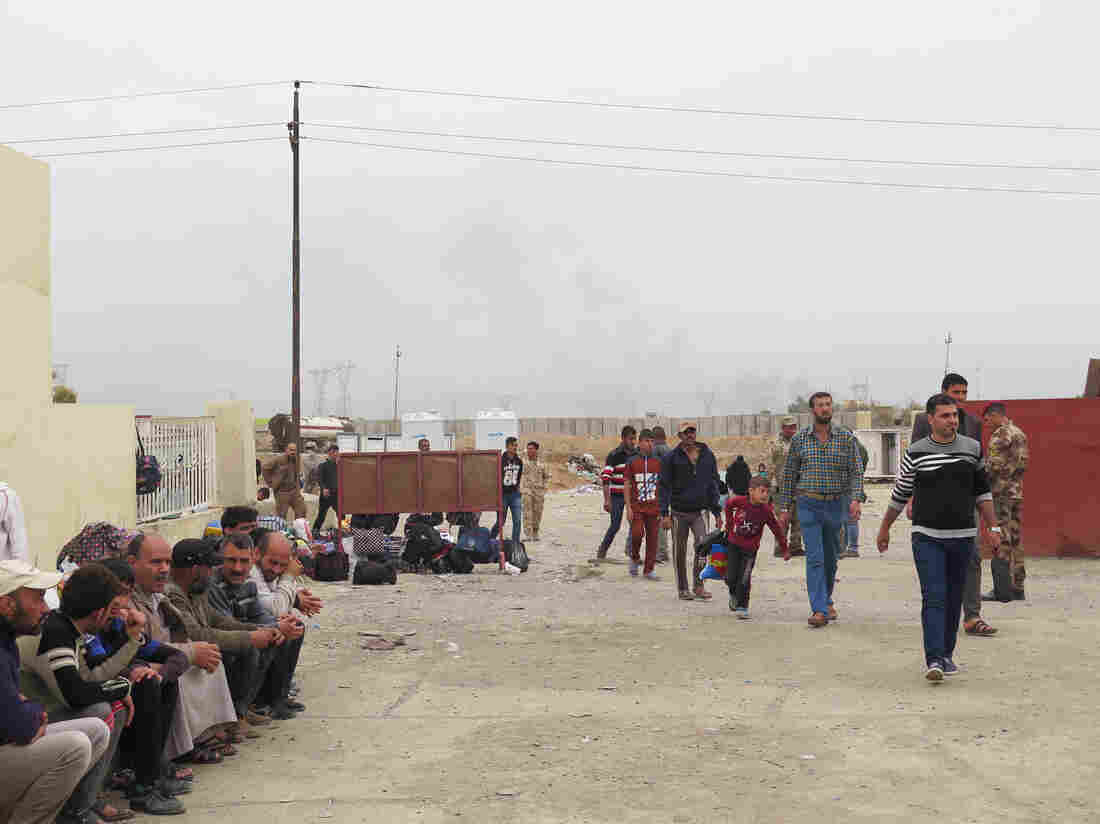 Civilians arriving at Scorpion Junction on the outskirts of Mosul where they are checked for suspected ties to ISIS. Jane Arraf/NPR hide caption 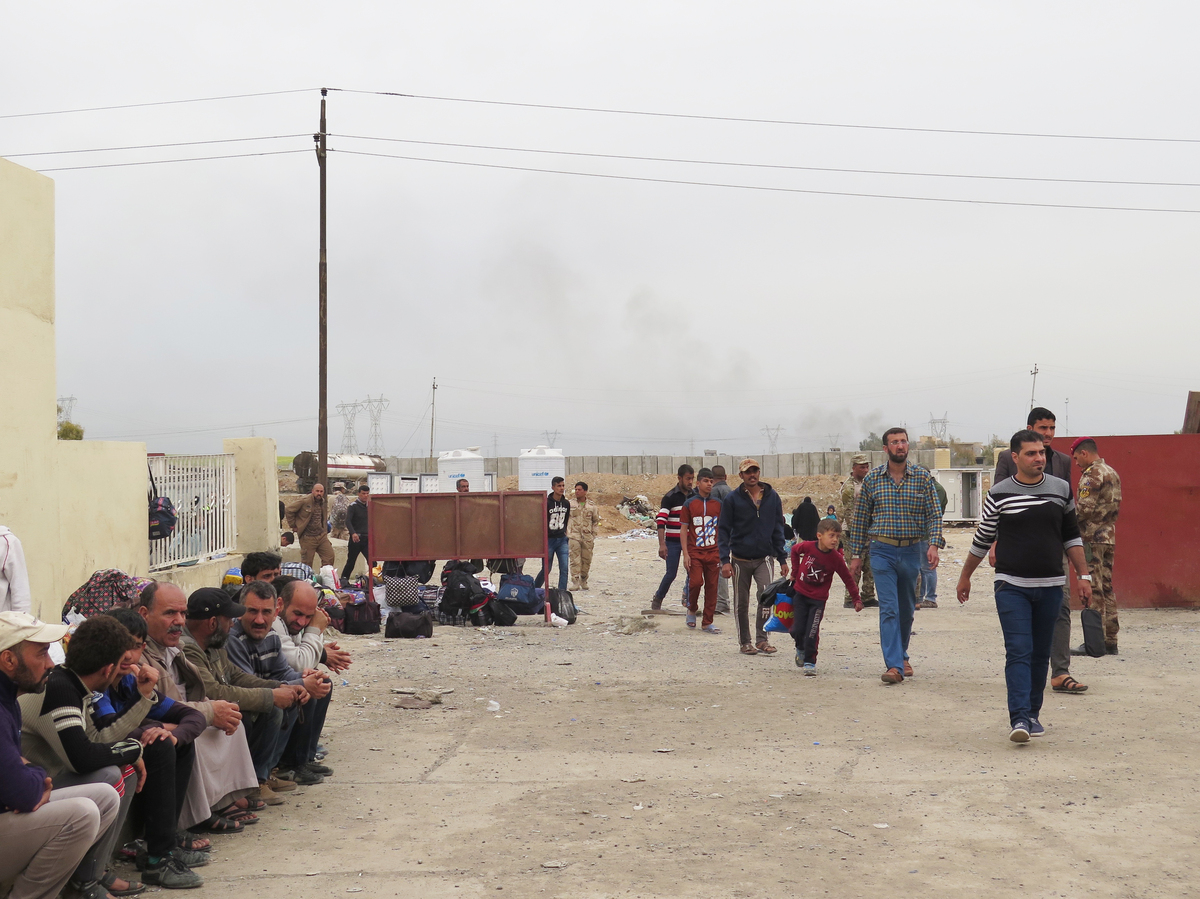 Civilians arriving at Scorpion Junction on the outskirts of Mosul where they are checked for suspected ties to ISIS.

When ISIS declared Mosul the capital of its self-declared caliphate, it set out to provide social services and prove it could run a major city. Three years later, most of that has vanished.

Omar says his father was wounded in the leg and the back in a mortar strike last week and died three days later — after ISIS doctors refused to try to save him.

More than 300,000 civilians are still trapped in Mosul. ISIS has kept them there to prevent the U.S. and Iraq from launching airstrikes and mortars against their fighters.

The Iraqi battle plan coordinated with the U.S. military has involved surrounding the city and leaving no escape route for either ISIS fighters or civilians.

In March, a U.S. airstrike in Mosul killed more than 150 civilians, many of them children. The U.S. is investigating whether ISIS explosives also contributed to the death toll.

Iraqi military leaders say no one knew there were so many civilians packed into houses.

ISIS Drove Them From School. Now The Kids Of Mosul Want To Go Back

This week, the Iraqi military dropped leaflets over ISIS-held areas telling civilians to try to stay in their own homes — an almost impossible requirement as ISIS herds civilians out of their own houses and deeper into the heart of the city.

"Lately ISIS has killed a lot of people — especially as the army got closer," says Bashar Taha. He and his sons say they saw the bodies of some of those executed by ISIS for trying to leave hung from electricity poles.

Even as civilians run out of food they had stockpiled, many say ISIS is confiscating it.

"Every time the army gets nearer, they get worse," says Jasim, a member of what had been Mosul's middle class. "I had seven bags of rice. They took four. I had two bags of sugar, they took one. I had two tanks of water they took one. Their excuse was it was for 'the Muslim brothers.' They have no relation with Islam." 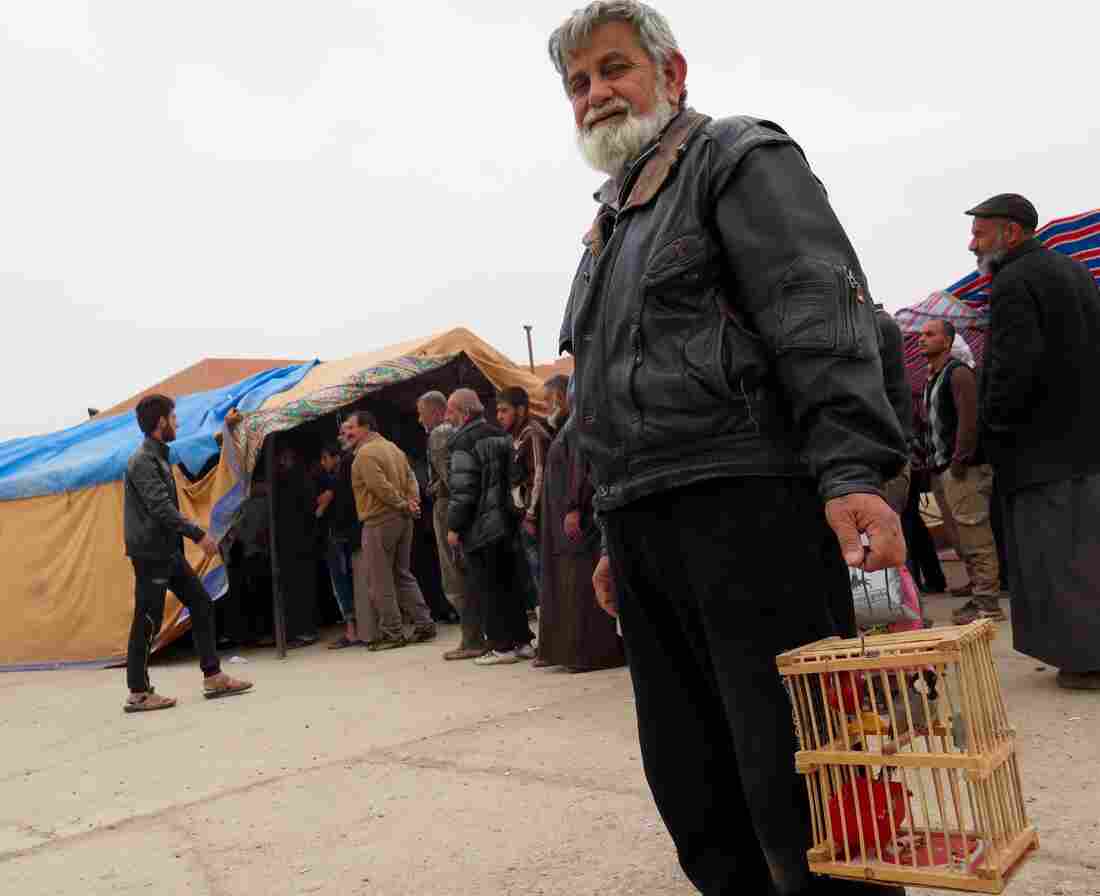 Ahmed, a civilian evacuated from fighting in Mosul, carries his pet bird. He says ISIS banned keeping birds and he hid it in the house for three years and made the cage from palm fronds when he knew they were leaving. Jane Arraf/NPR hide caption

As well as being victimized by ISIS, civilians are also dying in mortar attacks launched by all sides in the battle and in continuing airstrikes targeting ISIS.

Mahmoud, a government engineer, says an airstrike targeted one of the houses on their block a day before they left. He says ISIS fighters had forced some of the families on their street to give them rooms in their houses to set up sniper positions on the roofs and to store weapons.

He says the attack killed his next-door neighbors — a couple and their four daughters, the man's mother and a 3-year-old niece named Malak. Mahmoud had been teaching the little girl a few words of English every day. He chokes up as he describes seeing her body in the street.

For Iraqi Families With ISIS Links, Agonizing Choices — And Consequences

As he and his children ran from the house to get to safer ground, he says an elderly woman from the neighborhood who couldn't walk pleaded with him not to leave her.

"All my children were alive and I said, 'Thank God — I should help her,' so I carried the old woman on my back," Mahmoud says.

Safely outside Mosul, he shows me a video of a birthday party for his daughter's ninth birthday earlier this year — held in secret because of an ISIS ban on non-religious celebrations. A group of girls sings "Happy Birthday" in English and Arabic. Three-year-old Malak, her long hair pulled back in a ponytail, gleefully claps along, mesmerized by the candles on the cake.

Mahmoud studied in the West in a country he does not want to name because he is afraid ISIS will find him. After three years of living in fear under ISIS, his English is rusty. He struggles to find a word that will sum up the enormity of what they've been through.