Accessibility links
Who's Who In The French Presidential Election : Parallels Entrenched politicians have been swept aside, and fringe candidates and untested newcomers have filled the void. Four front-runners lead the field of 11 in Sunday's first round of voting. 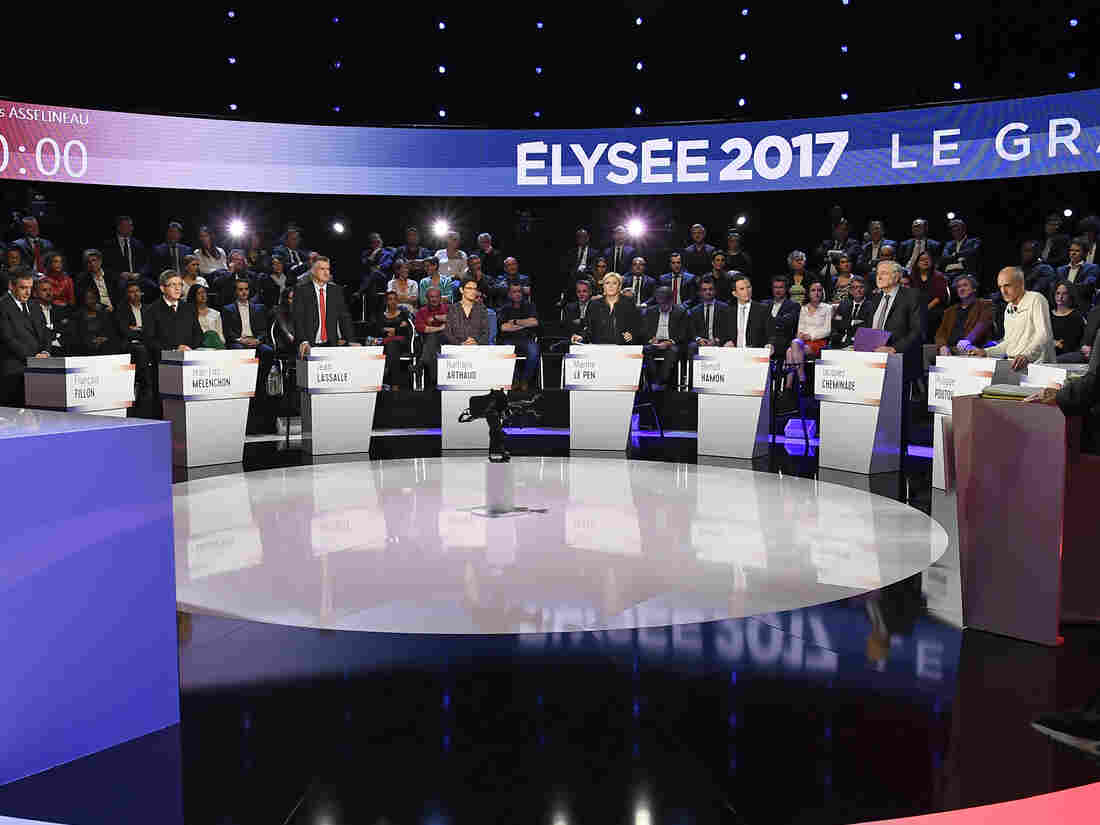 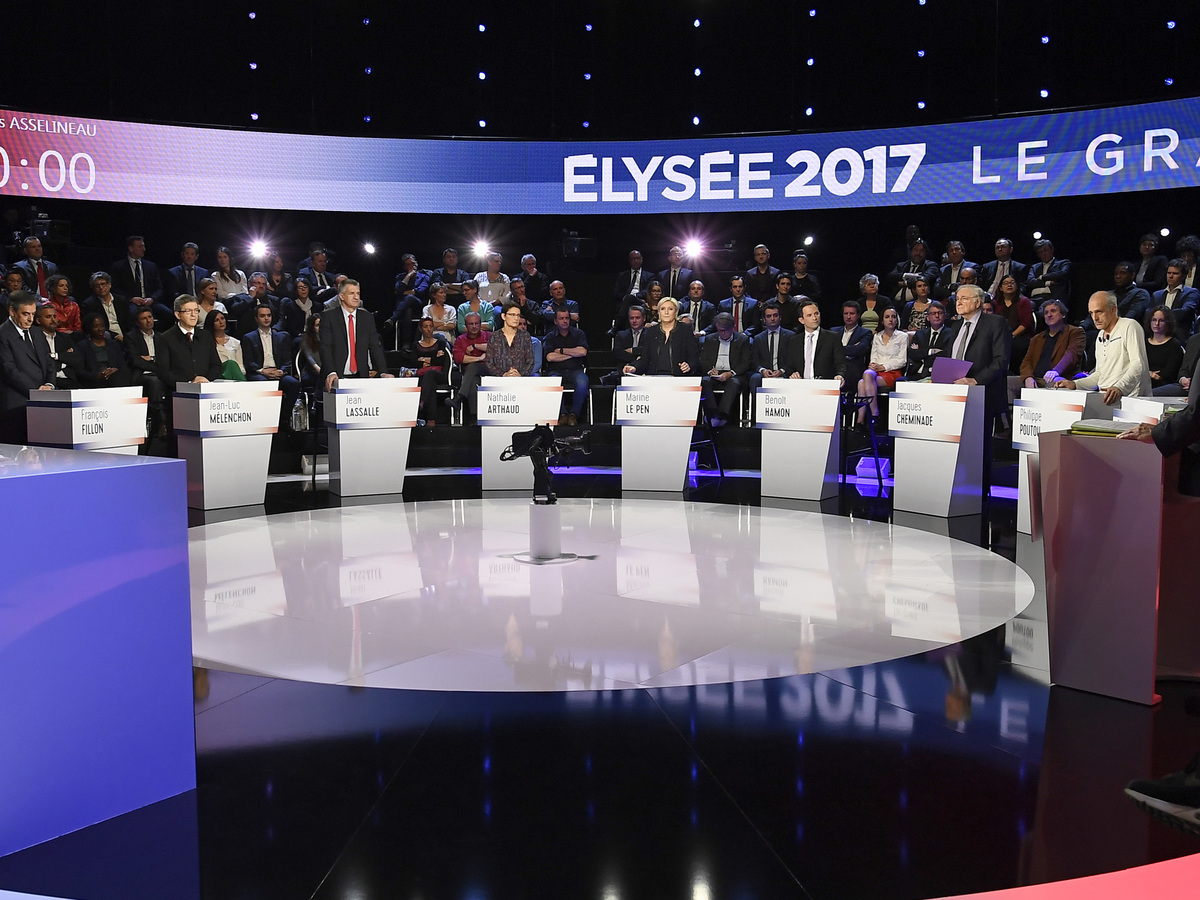 The French go to the polls Sunday to cast ballots in the first round of a political race like no other in France's recent history: Entrenched politicians have been swept aside, with fringe candidates and untested newcomers filling the void.

After Sunday, the field of 11 presidential candidates will be narrowed down to two contenders, who will face each other in a runoff on May 7.

The top four candidates offer starkly opposing visions for the country. Yet they are so close in the polls that the race is impossible to predict. Polls in France are due to close at 1 p.m., ET (7 p.m., Paris time), while some larger cities' polls will close an hour later. Preliminary results could be known about 3 p.m., ET.

Here are the front-runners candidates and their platforms: 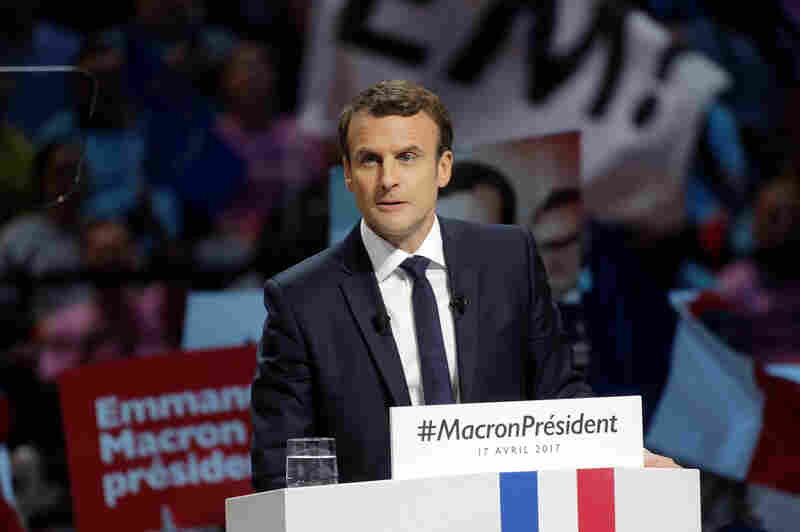 Emmanuel Macron is the presidential candidate of En Marche ("On The Move"), the party he founded. Sylvain Lefevre/Getty Images hide caption 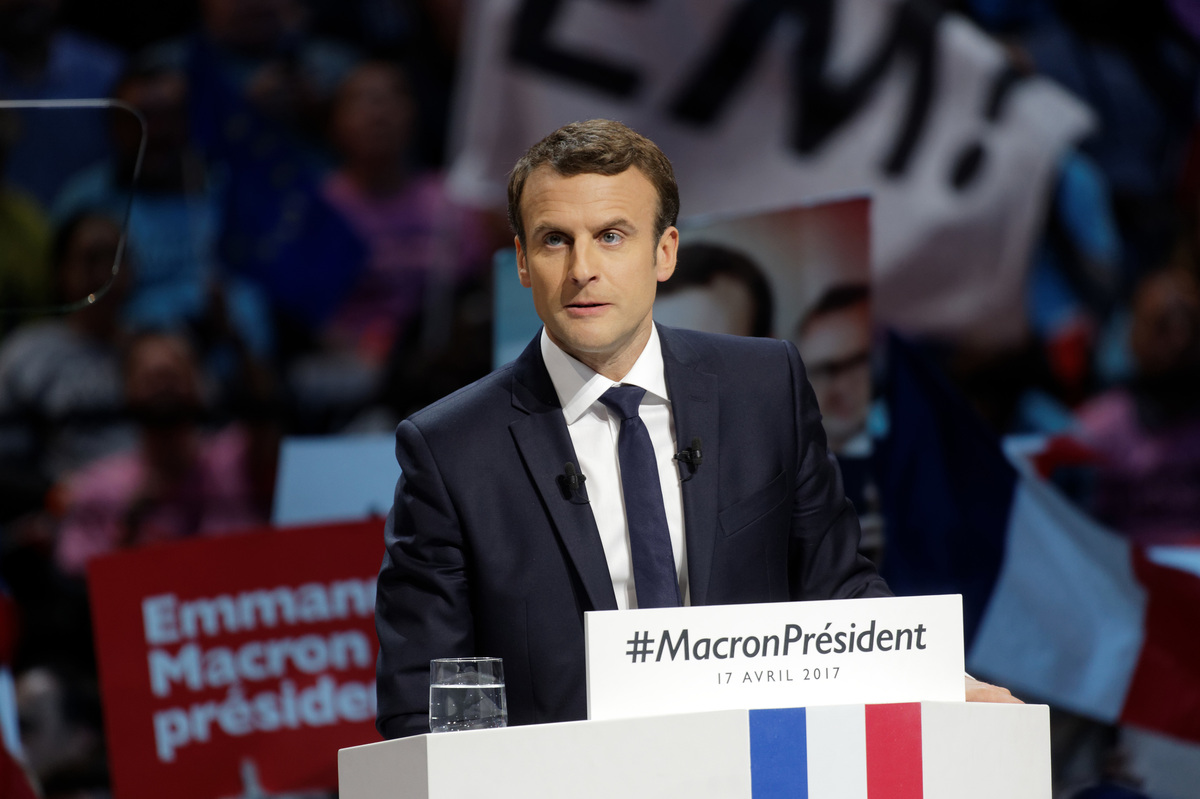 Emmanuel Macron is the presidential candidate of En Marche ("On The Move"), the party he founded.

Emmanuel Macron currently leads the polls, with an estimated 23 percent of the vote.

The 39-year-old former investment banker founded his political movement — En Marche, or On The Move — last August after stepping down as economy minister to Socialist President Francois Hollande.

Macron has never been elected to public office. He says he is neither left nor right, and says the traditional parties don't have the answers for 21st century problems. The self-proclaimed progressive says he wants to make France innovative and to encourage risk taking.

As president, Macron says he would make France more business-friendly and train workers for new jobs, rather than trying to save old jobs in dying industries.

Corinne Mellul, a professor of political science at the Catholic Institute of Paris, says Macron provides voters hope for change and an escape from the left-right divide.

"Whether it amounts to something real remains to be seen," she says. "But part of his appeal is that no one even knew who he was three years ago."

Macron's critics say he stands for nothing and has an empty program. There also been a disinformation campaign swirling about him, and his campaign says he has been targeted by Russian hackers. The candidate is pro-European Union and takes a hard line on Putin.

Some of the conspiracy theories charge that Macron is an agent of U.S. banks. Others say he has a secret private life or may be gay. Macron married his high school French teacher, who is 24 years his senior. Brigitte, his wife, appears regularly with him in public, and is said to be closely involved with his campaign. 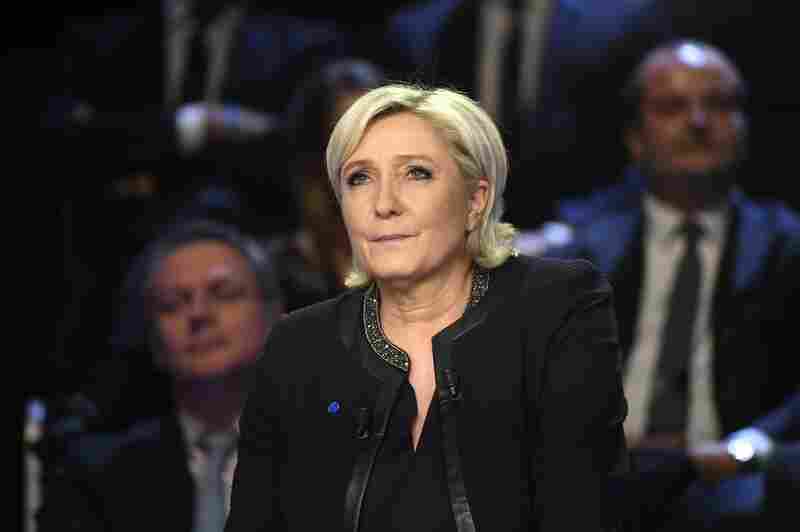 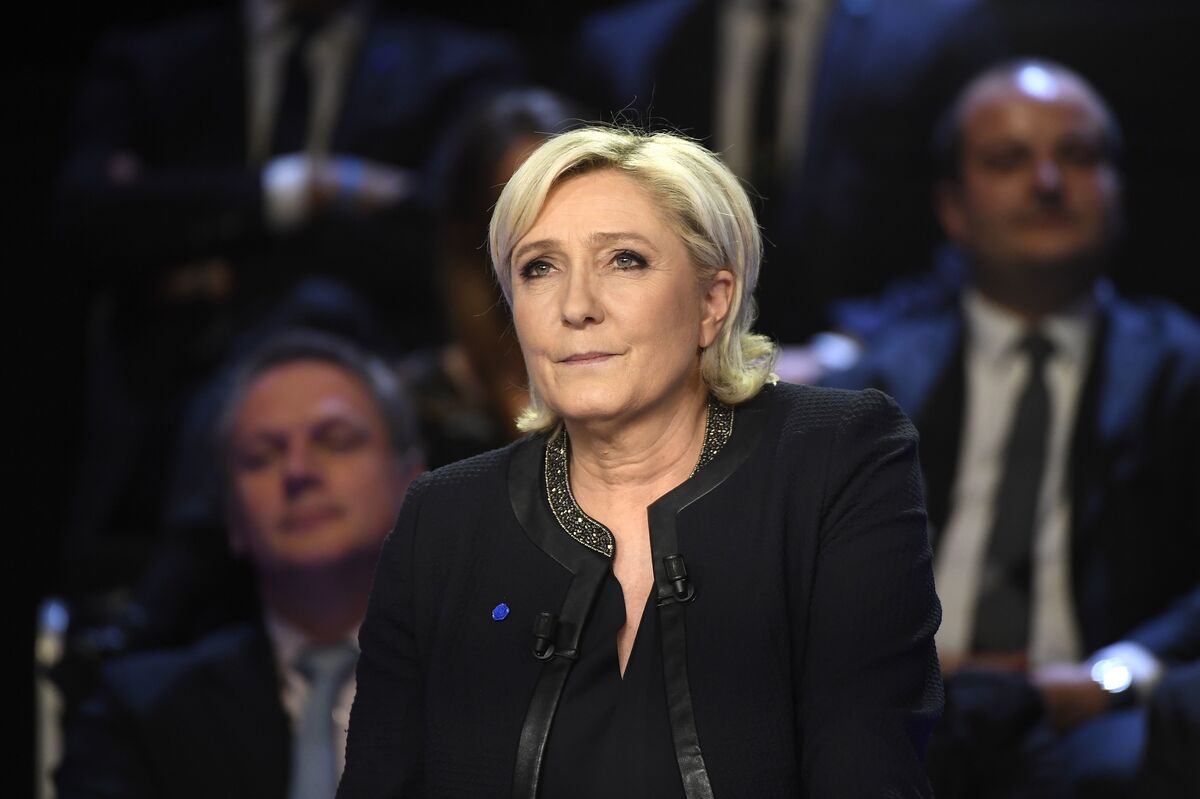 Marine Le Pen is the presidential candidate of the far-right National Front.

Marine Le Pen, leader of the far right, trails by just one point behind Macron in polls.

The National Front party has never been so strong. In 2011, Le Pen took over leadership of the party founded in 1972 by her father, Jean-Marie Le Pen. She has worked to bring the National Front more into the mainstream and break with the party's xenophobic, anti-Semitic past. She has succeeded in "de-demonizing" the party to a great extent.

If elected, Le Pen says France will vote in a referendum to leave the European Union, which she calls a tyrannical, undemocratic institution. France is one of the key founders of the EU, and if it pulls out, analysts say the EU could not survive.

Another priority for Le Pen is reinstating France's borders and severely curbing immigration. Le Pen believes the wind of history is behind her. She says globalization is gutting industry and agriculture in countries across Europe, and people yearn for a return to the strong nation-state.

Le Pen promotes "economic patriotism," which she says the EU prohibits. In other words, she wants to promote, buy, consume and eat French. 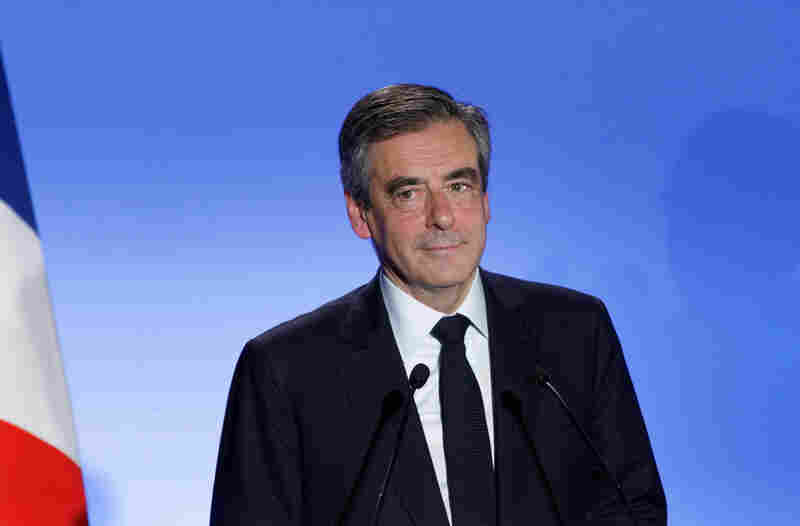 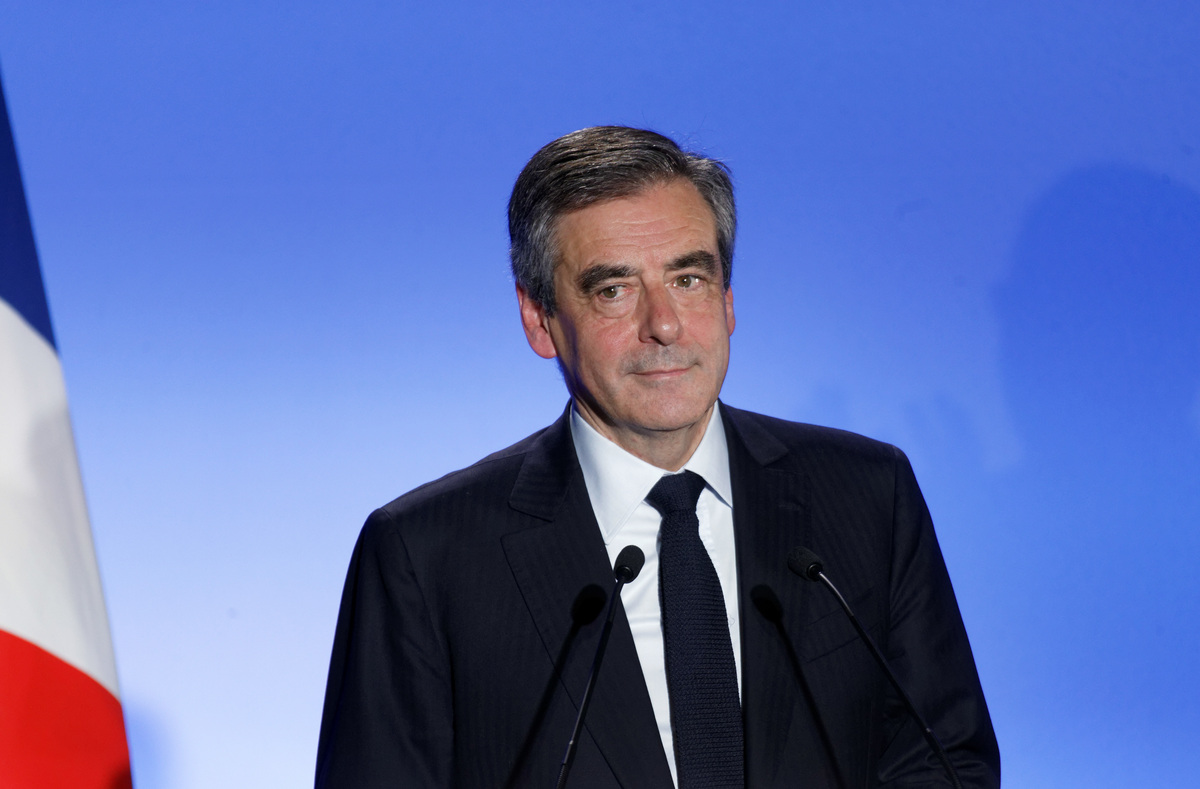 Francois Fillon is the presidential candidate of the center-right Republicans party.

Francois Fillon is the only candidate from the mainstream political establishment and the only one with real experience in governing.

Fillon served as prime minister to President Nicolas Sarkozy. Though Sarkozy allegedly treated him as an underling, Fillon got his revenge by soundly defeating his former boss (who was hoping to make a political comeback) in the conservative primary last November.

Fillon is a polished and seasoned politician and a wholesome family man who was considered a shoo-in for the French presidency — until January, when allegations surfaced that he may have employed his wife in a fake job as his parliamentary aide. Fillon is now under official investigation. He has also admitted to accepting expensive suits and watches from "a friend." (France has discovered that Fillon is a man of luxury tastes.)

Despite the cloud hanging over him, Fillon has plugged on, proclaiming his innocence. Hiring family members is not illegal in France, as long as they do real work. And he did give back those suits.

Even so, the scandal has tarnished him. Fillon once touted himself as the "irreproachable" candidate for the party founded by Gen. Charles de Gaulle. Not anymore.

If elected, the fiscal conservative says he'll get the country's finances back in order by cutting public sector jobs and reducing the deficit. That won't be easy with his own credibility in question.

Still, Fillon cannot be counted out. He's managed to maintain 19 percent support (just a couple points behind Macron and Le Pen) despite the relentless attacks against him. His supporters can also be counted on to go out and vote.

Political analyst Pascal Perrineau says many in Fillon's historically solid base will have no problem supporting him.

"Many people will say, 'OK, so he got some suits and watches, what's so grave about that?'" Perrineau says. "It's like the reasoning in Machiavelli's The Prince. Do we ask a prince to be moral or efficient? And Machiavelli says efficient." 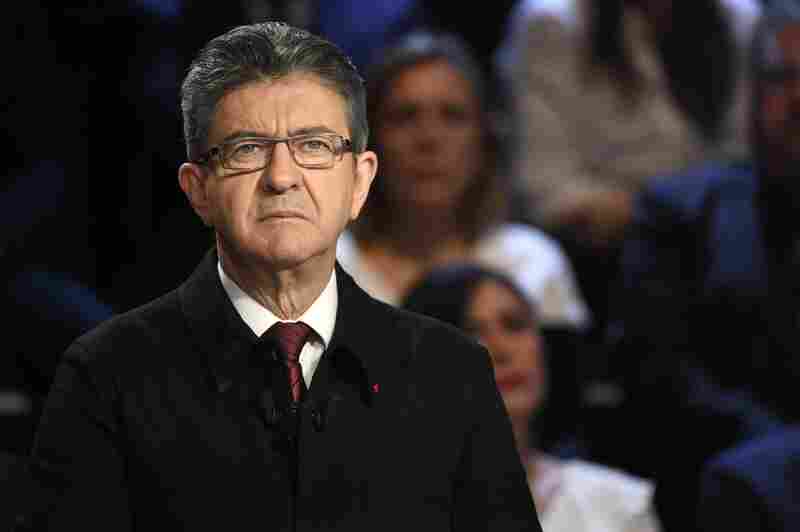 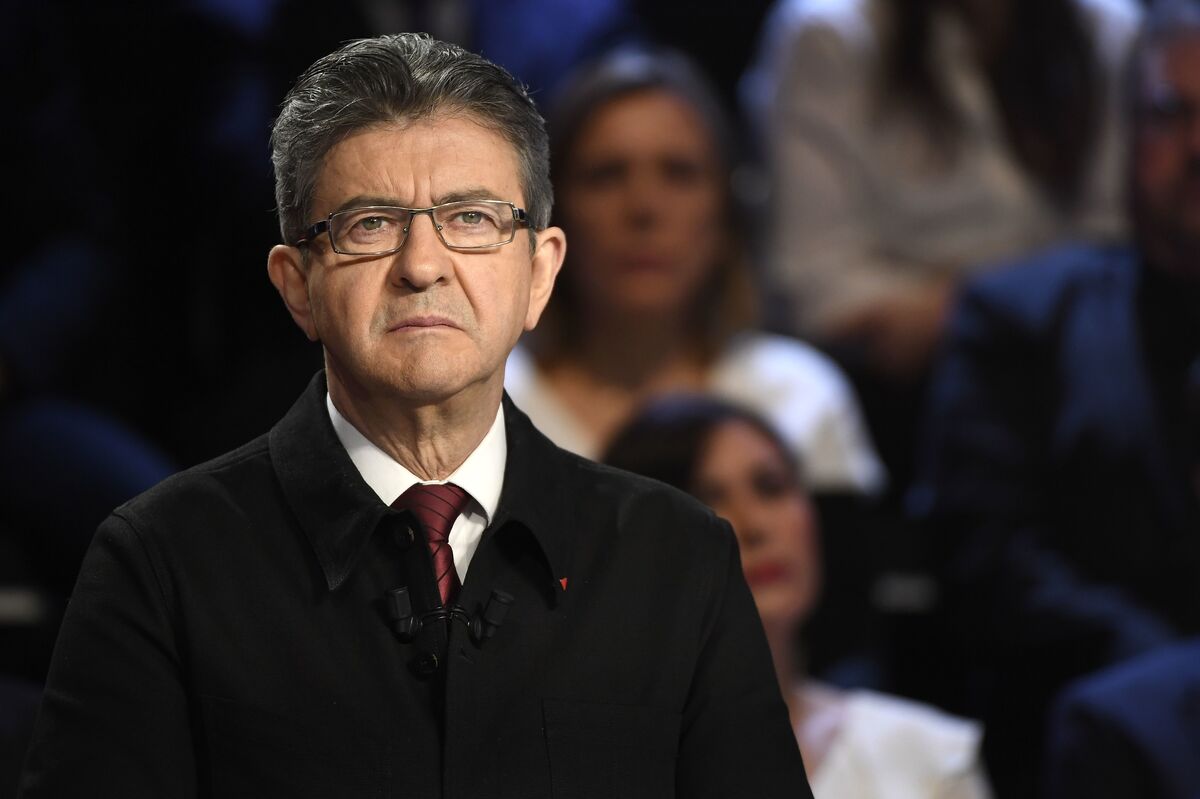 Jean-Luc Melenchon has surged in the polls in recent weeks and is now just half a point behind Fillon.

Known by some as "French Bernie Sanders," Melenchon is a charismatic speaker and began to soar after his humorous, brilliant performances in both televised debates. (Nevermind that he's a former Trotskyist.)

Many of Melenchon's ideas are similar to Le Pen's. Both oppose globalization and want generous social benefits and protection for workers. Neither likes the European Union.

"That there are a lot of similarities should not be a surprise," says Mellul, the political science professor. "The far left and the far right appeal to the same electorate. The disgruntled, left-out, working class and the disenfranchised victims of globalization."

Like Sanders in the U.S., Mellul says, Melenchon attracts young voters who think he can really change things.

"Don't underestimate the constant popularity of Trotskyism and communist ideas," she says. "And by communist, I'm not talking about the Soviet experiment, but Karl Marx. The appeal of this has never died in France."

Analyst Perrineau says whoever wins Sunday is unlikely to be able to unite a very divided country.

"We see there are two Frances," he says. "One is doing well. It is cosmopolitan, it has many colors and speaks several languages. But go out from the cities, you can find another France. It's immobile, unemployed and worried about its identity. A president must represent both sides of France and each of these candidates only speaks to one."