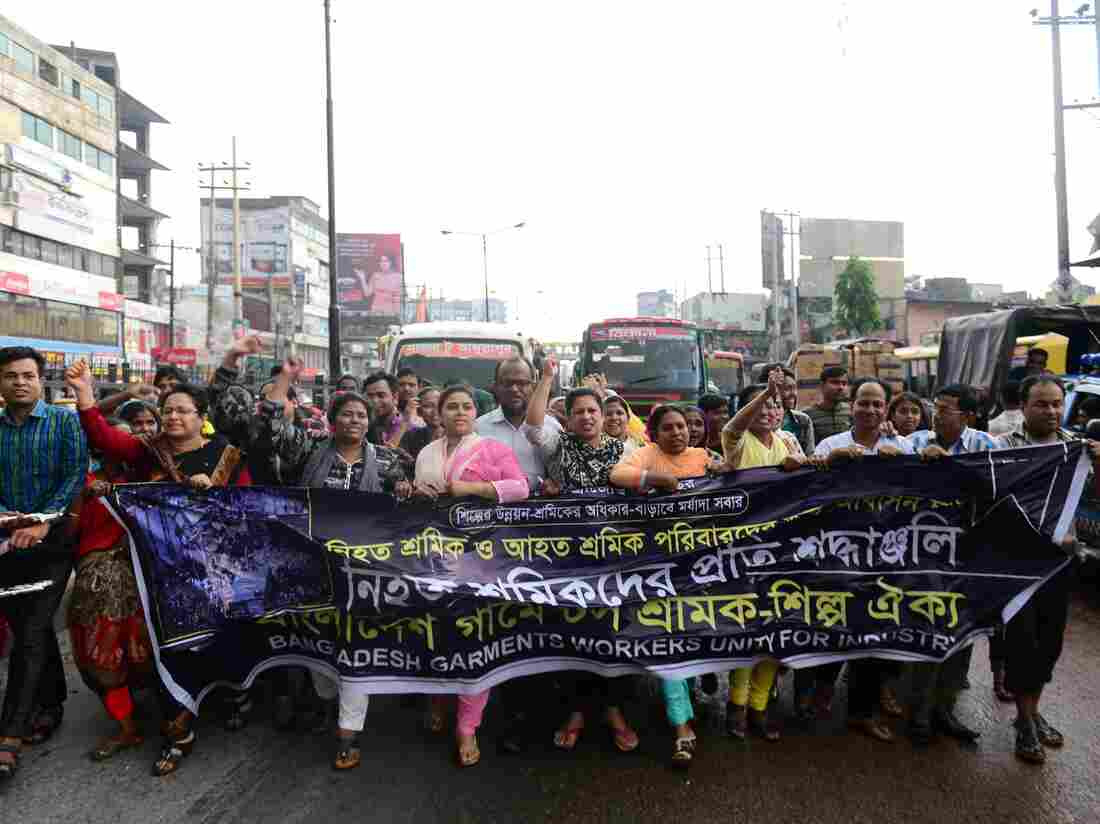 Bangladeshi activists mark the fourth anniversary of the Rana Plaza building collapse at the site where the building once stood in Savar, on the outskirts of Dhaka, on April 24. STR/AFP/Getty Images hide caption 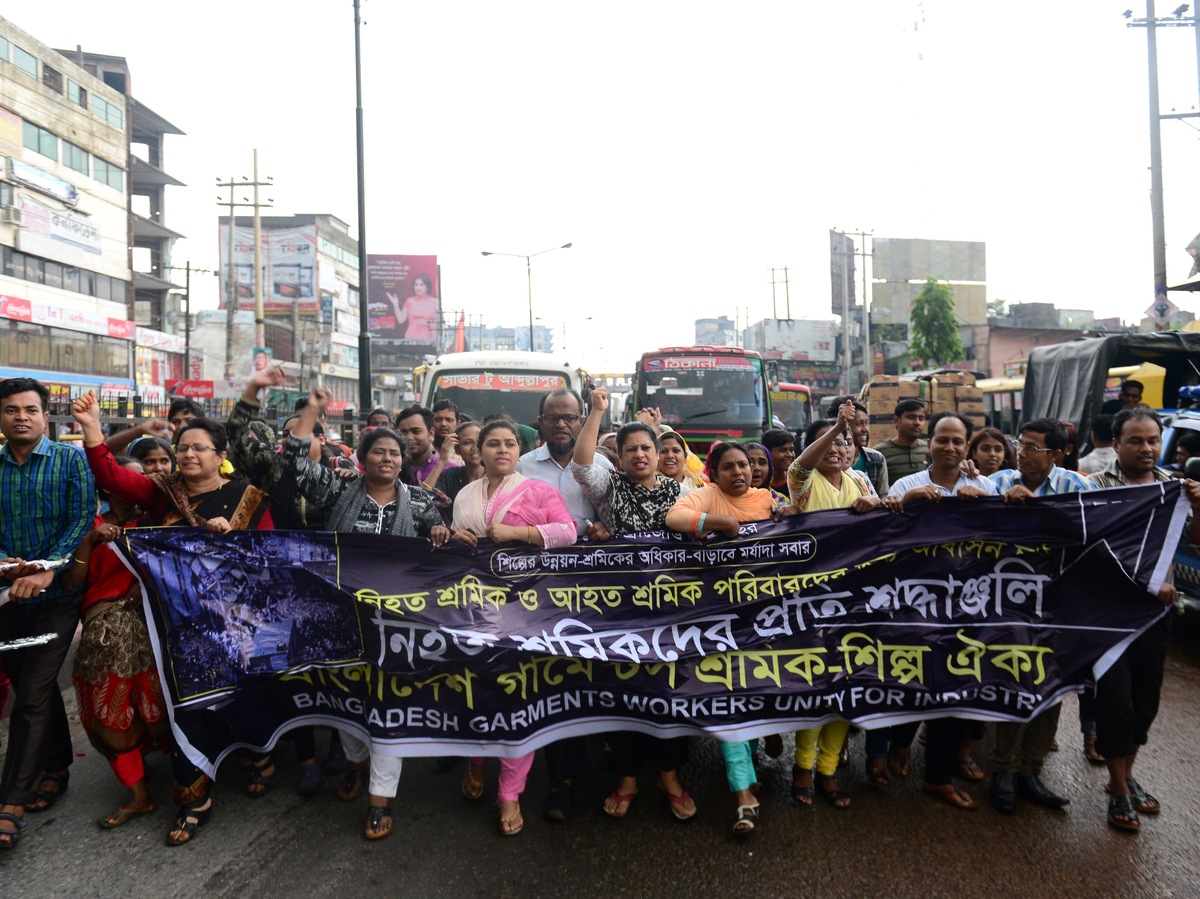 Bangladeshi activists mark the fourth anniversary of the Rana Plaza building collapse at the site where the building once stood in Savar, on the outskirts of Dhaka, on April 24.

On April 24, 2013, the eight-story Rana Plaza building outside Dhaka, Bangladesh, collapsed, killing more than 1,100 people and injuring thousands of others. At the time, the building housed five garment factories that manufactured goods for major retail companies in Europe and North America.

It is considered the deadliest disaster in the garment industry. The causes included shoddy construction, a building with too many floors and too much heavy equipment for the structure to withstand.

The incident shook Bangladesh's $28 billion garment industry, the second largest in the world behind China. It drew attention to horrific conditions for factory employees, and raised questions about transparency in the global garment industry in which they work.

But four years later, a report on supply chain transparency released by Human Rights Watch finds only 17 of 72 apparel and footwear companies contacted by a coalition of labor and human rights groups and global unions have agreed to implement a transparency pledge by the end of this year.

The Apparel and Footwear Supply Chain Transparency Pledge sets a minimum industry-wide standard for supply chain disclosure, says Aruna Kashyap, senior counsel in the Women's Rights Division of Human Rights Watch and co-author of the report. The pledge was drafted and endorsed last year by a nine-member coalition, which includes Human Rights Watch, the International Labor Rights Forum and International Trade Union Confederation, and requires companies to disclose twice a year all the sites that manufacture their products, including details such as addresses, types of products made and number of workers at each site.

In the aftermath of the Rana Plaza tragedy, the Bangladeshi government rushed to improve safety measures, and human rights and labor advocates called for greater accountability and transparency in the industry. Last year, 38 people were charged with murder in the building collapse.

Government labor reforms regarding workers' rights and pay and factory compliance have been put in place. But "in terms of effectiveness, there remains a gap," Khondaker Golam Moazzem, research director with the Centre for Policy Dialogue in Dhaka, recently told The Daily Star, a Dhaka-based newspaper. 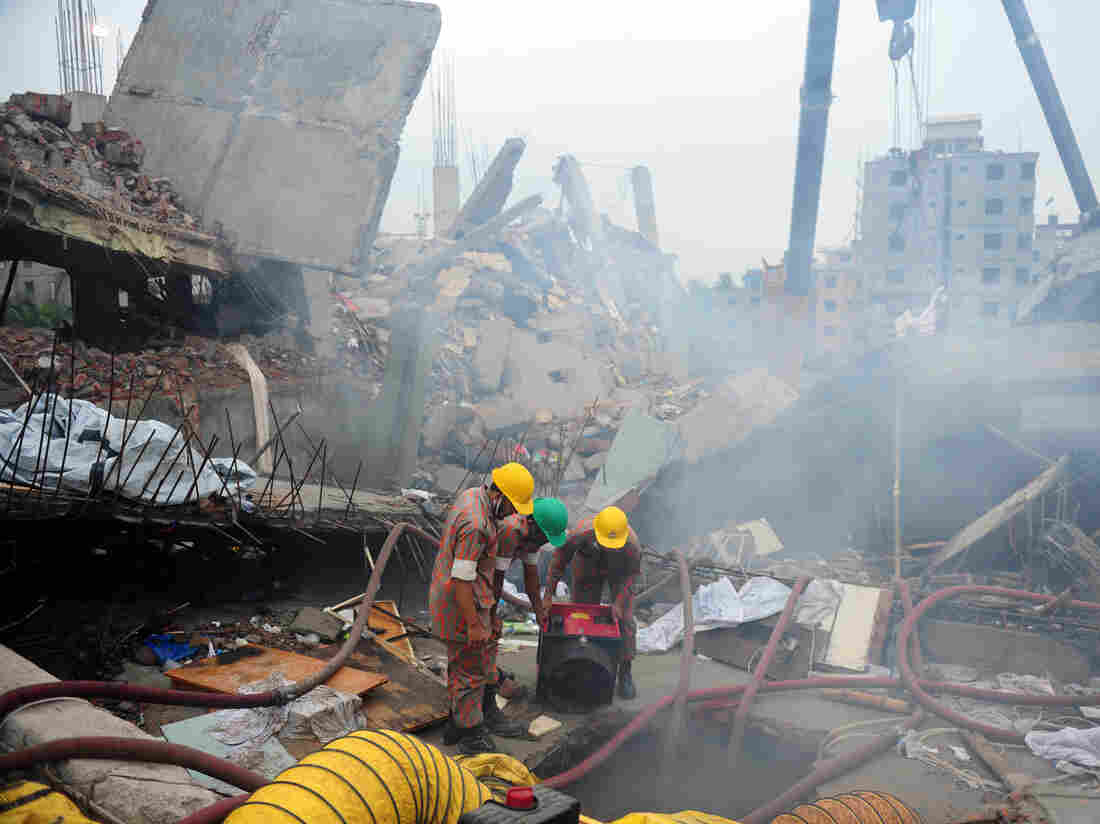 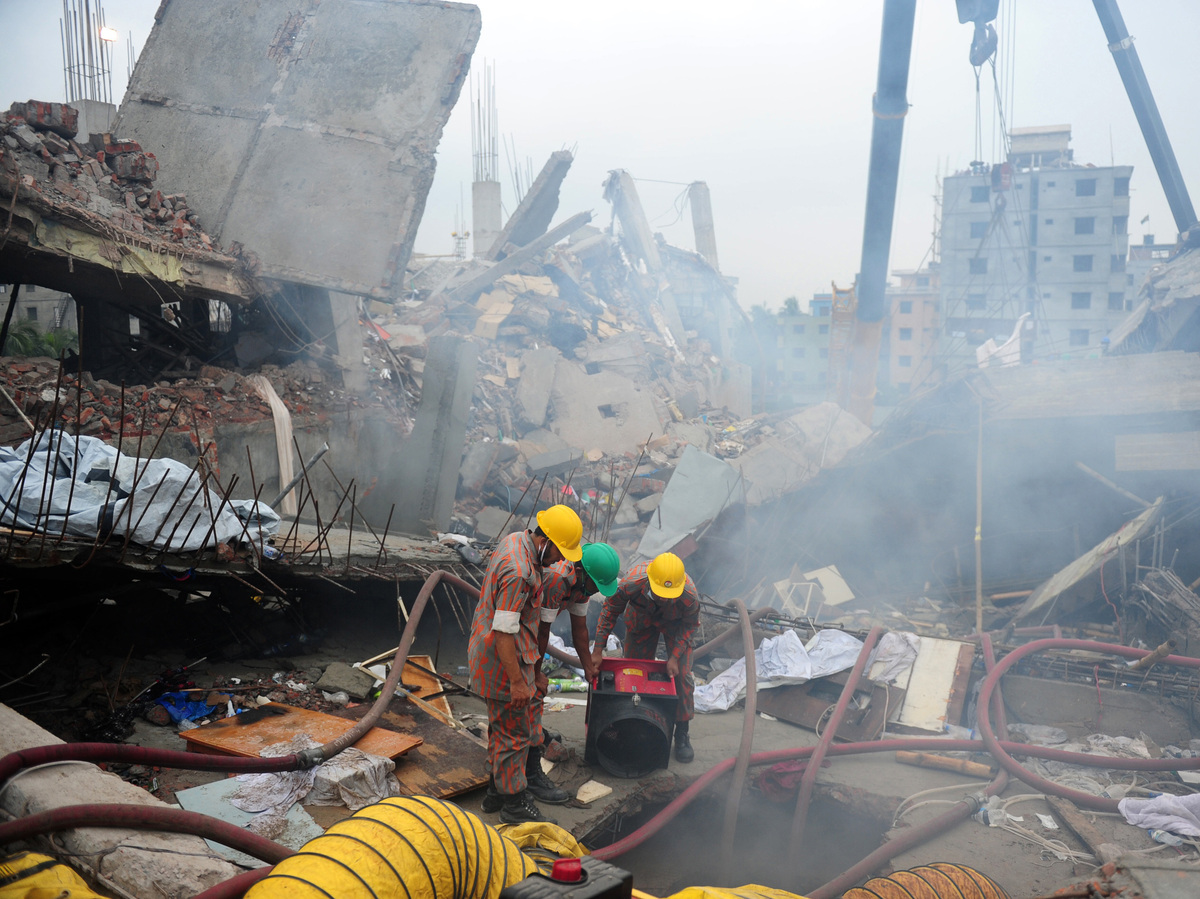 On April 29, 2013, Bangladeshi firefighters try to control a blaze during a rescue attempt as Bangladeshi army personnel begin the second phase of the rescue operation following the Rana Plaza collapse.

Two major agreements between global retailers and brands and trade unions – the Accord on Fire and Building Safety in Bangladesh and the Alliance for Bangladesh Worker Safety – were also signed after the tragedy. The organizations in charge of these initiatives released statements this month indicating they had made progress, but there was still more work to be done.

Kashyap says that even though global apparel companies don't directly employ workers in Bangladesh, they do own and sell brands that have business relationships with the factories that employ those workers. And it's transparency about those relationships — knowing which factories are producing for which brands being sold by which parent company — that is important, she says.

Companies such as Nike, Patagonia and H&M Group are among the 17 committing to adhere to the transparency pledge by the end of 2017. Others, such as Columbia Sportswear and the Walt Disney Co., which publish names and addresses of supplier factories, are acknowledged in the report as moving "in the right direction." Companies listed in the "No Commitment to Publish Supplier Factory Information" category include Hugo Boss, Mango and Walmart.

"The labor movement, over decades, has been demanding that parent companies have to publish their supplier information," says Kashyap. While many international retailers have been reporting that information in some capacity over the years, she says, it's been inconsistent.

Kashyap says the Rana Plaza tragedy was a wake-up call because no one knew immediately which companies were sourcing clothing from the building at the time of its collapse.

"And so [investigators] had to actually go through the ruins to collect labels or interview surviving workers ... to hold these brands accountable," says Kashyap.

In the end, major apparel companies from the U.S. and Europe, including Children's Place, Mango and Premier Clothing, were found to have had recent orders in factories at Rana Plaza.

'It does matter to consumers'

After Rana Plaza, which came on the heels of two other deadly factory fires — one in Pakistan and the other also in Bangladesh — Kashyap says no parent company in the garment industry should still be resisting transparency, but many are.

There are many reasons a company might not want to sign the transparency pledge, Kashyap says, including fears of competitive disadvantage and anti-competition concerns.

Some companies, such as Walmart, won't sign the transparency pledge because they already have their own transparency mechanisms in place. "Walmart is working to improve transparency around our supply chain through a number of initiatives," Marilee McInnis, a spokeswoman for Walmart, told NPR via email.

But Kashyap says even when companies implement their own measures, it may not be enough. "We're not saying that those systems should not be in place," says Kashyap. "What we're saying is that there are clear limitations to those systems and what transparency does complements everything else you have."

Another reason that so few companies have signed the pledge so far could be because, historically, factory lists have been viewed as proprietary information, says Sharon Waxman, president of the Fair Labor Association, a Washington, D.C.-based nonprofit that brings together brand suppliers and labor rights groups with the goal of improving workers' rights.

But agreements like the transparency pledge are still very important and they matter to consumers, says Waxman. She notes that many of the companies that have signed the pledge are members of her organization.

"I think consumers, if they have a choice to buy from a brand or supplier that has a very high level of labor standard compared to another one, the price being the same — I think it does matter to consumers," she says. "And if you step back and look at the spread of laws and regulations that are demanding and requiring more transparency in supply chains. I think that really speaks to the level of interest of consumers."

While the transparency pledge has no real enforcement mechanism, Waxman says once a company is on the record saying it's going to disclose more information about its supply chain, this will lead to greater accountability.

'They didn't know who to reach out to'

More transparency would also send a strong message to workers in the industry, says Kashyap of Human Rights Watch.

Bangladesh's garment industry is huge: According to the Clean Clothes Campaign, an alliance of non-governmental organizations and trade unions in the garment industry, it employs between 3.5 million to 4 million people and accounts for about 12 percent of Bangladesh's GDP.

Since the Rana Plaza collapse, Bangladeshis have become increasingly vocal in demanding better wages and working conditions. The country's minimum wage is just 32 cents an hour.

When tens of thousands of workers walked off the job to protest low wages at the end of last year, it resulted in a week-long shutdown of more than 50 factories outside Dhaka.

But after Rana Plaza, some refused to go back to work in the industry. Kashyap has been in touch with some of them, and wrote this month about one Rana Plaza survivor's ongoing struggle with depression and trauma.