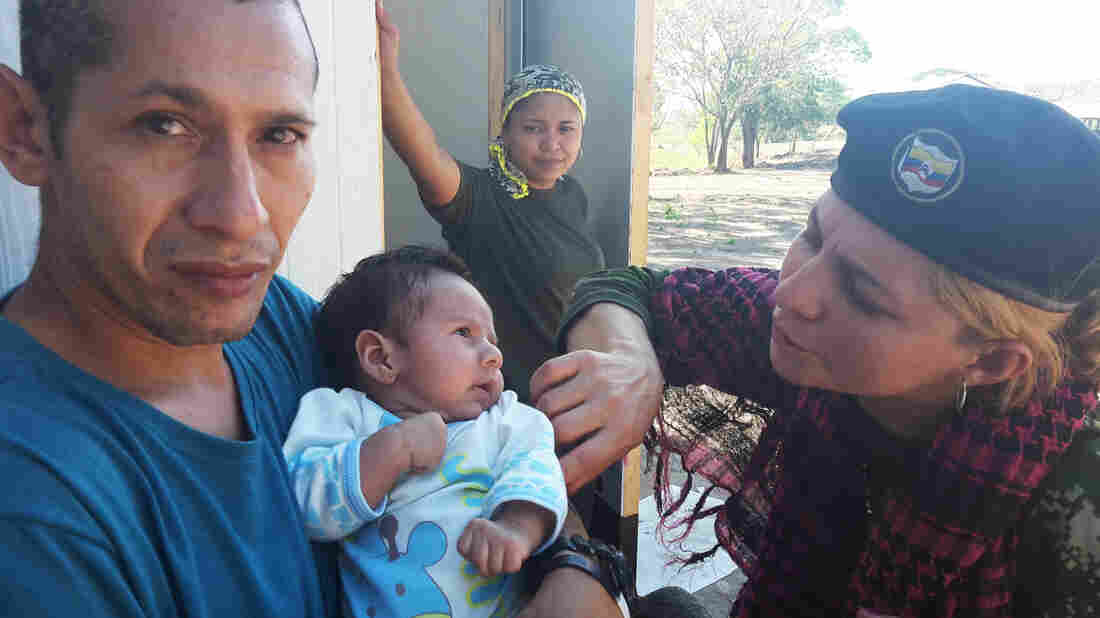 FARC rebel Alfredo Gutierrez holds his month-old daughter, Desiree, as fellow FARC rebel Jenny Cabrales plays with her. Since the Colombian government and FARC leaders reached an agreement last year to end the war, rebel women have given birth to more than 60 babies. About 80 more are pregnant. John Otis for NPR hide caption 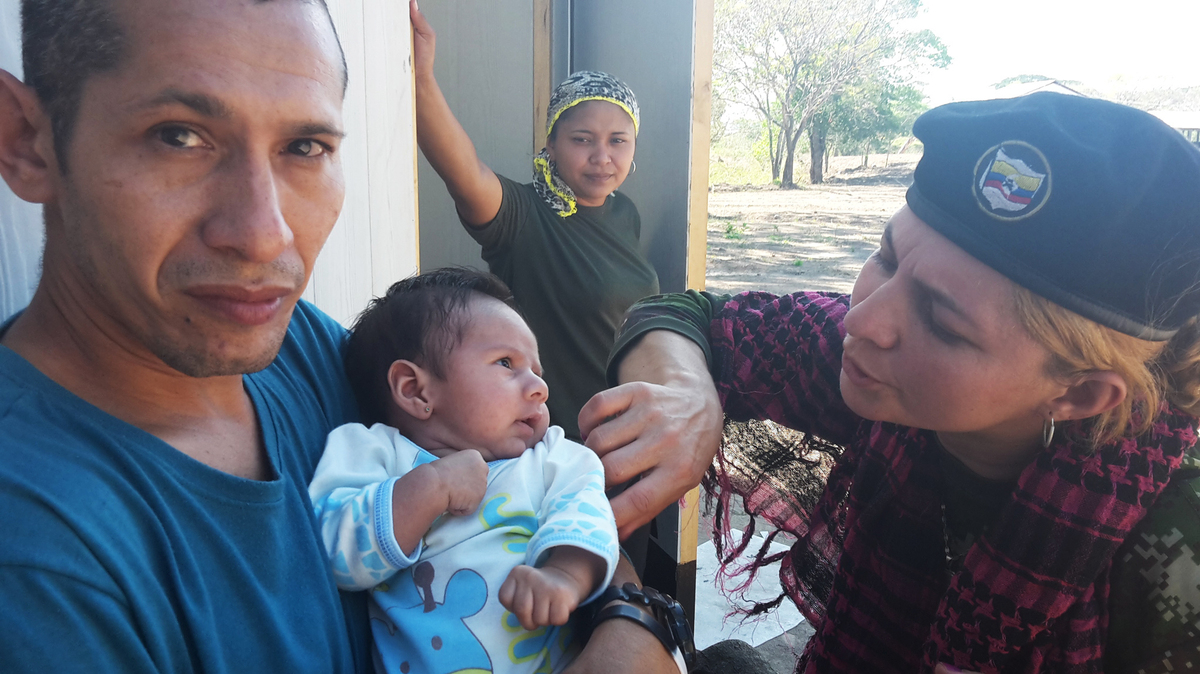 FARC rebel Alfredo Gutierrez holds his month-old daughter, Desiree, as fellow FARC rebel Jenny Cabrales plays with her. Since the Colombian government and FARC leaders reached an agreement last year to end the war, rebel women have given birth to more than 60 babies. About 80 more are pregnant.

For Colombian guerrillas on the run from the army, crying babies were considered a security risk. That's why during the country's half-century-long guerrilla war, women – who make up about one-third of rebel forces – rarely gave birth.

But under a peace treaty, fighting between Revolutionary Armed Forces of Colombia — the Marxist rebel group known as the FARC — and the Colombian government has ended. And that's led to a rebel baby boom.

At a FARC camp near the northern Colombian town of Conejo, the main attraction is an adorable month-old girl named Desiree, whose parents are FARC guerrillas. Rebels take turns cradling Desiree in their arms and cooing at her.

"I've always liked kids," says her father, Alfredo Gutiérrez, a lanky rebel who has been at war for 21 of his 39 years. He thanks God that he and his wife can raise their daughter now in peace.

Gutiérrez is among 7,000 FARC members gathered in 26 special demobilization camps around Colombia, where they are turning in their weapons and preparing to return to civilian life. Some plan to move back to the towns and villages they came from to look for jobs, reunite with loved ones — and raise families.

Since the Colombian government and FARC leaders reached an agreement last year to end the war, rebel women have given birth to more than 60 babies. About 80 more are pregnant.

"This is a show of confidence by the guerrillas" in the peace process, says Alirio Córdoba, the Conejo FARC camp commander. "Many couples are very hopeful about the future."

As they lay down their weapons — a six-month process scheduled to end May 31 — the guerrillas must stay put in their camps. But pregnant rebels, escorted by United Nations personnel monitoring the peace process, are allowed visits to nearby hospitals and clinics for checkups and to give birth.

It's a stark contrast from all the years when Colombia's war, which claimed more than 220,000 lives, was raging.

Although some rebel commanders were allowed to have children, in general, getting pregnant was frowned upon and female rebels were ordered to use contraceptives. But in their remote mountain and jungle hideouts, supply lines were unreliable, drugs often ran out and many rebel women got pregnant.

Except for cases of rape, when the mother's life is danger or when the fetus is not going to survive, abortion is illegal in Colombia. However, the procedure was common in FARC camps. In many cases, FARC medics performed abortions in makeshift jungle clinics, whether or not the patients consented, says Alexandra Sandoval, a lawyer in Bogotá for the human rights group Women's Link Worldwide.

"The idea was that having babies during wartime was too difficult and that it would make it easier for the army to follow the guerrillas," Sandoval says. "Some women agreed with this logic and had abortions, but others did not and were forced to have abortions."

Córdoba, the camp commander, denies the FARC ordered women to end their pregnancies. He also dismisses criticism of abortion within the guerrilla ranks and points out that the procedure is widely practiced throughout Colombia at clandestine abortion clinics.

"There is a lot of hypocrisy," he says.

It's unclear how many abortions were performed in FARC camps during the war, although reports in the Colombian media have placed the number in the thousands. In March, Spain extradited a medic to face charges that while working for the FARC, he forced pregnant female FARC members to drink a liquid that induced abortions. 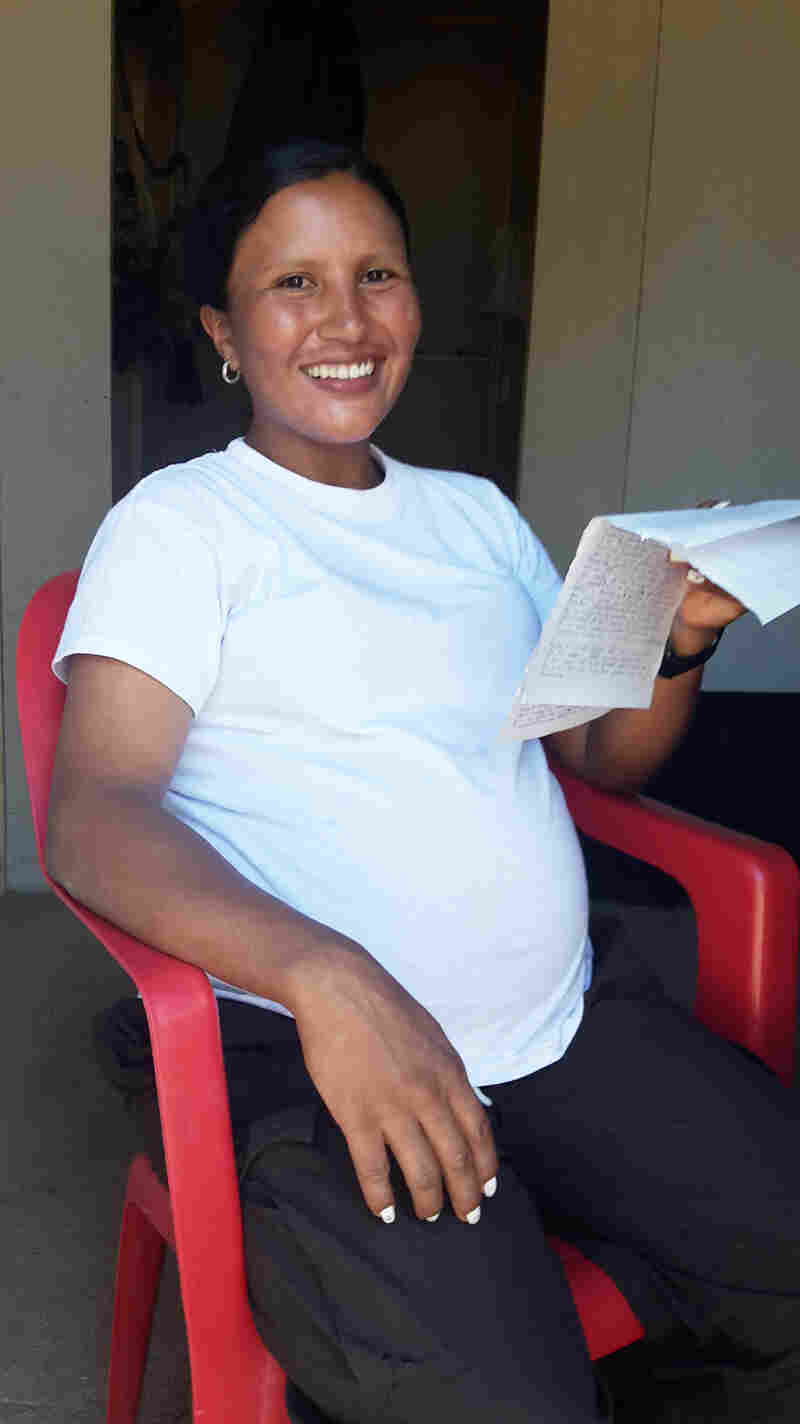 Yolanda Rivas, a nurse with FARC, had three abortions during the war years. "It was our duty," she says, "because having a baby would have put our lives and those of our comrades in danger." Now she is pregnant again and plans to keep her baby. John Otis for NPR hide caption

Sandoval, the lawyer, is urging rebel woman who had abortions against their will to seek reparations before a special tribunal set up to investigate Colombian war crimes.

"It has a huge impact in their mental health," she says. "For them, it's difficult to think if they want to have new children. Also, they feel guilt although it was not their fault."

Yolanda Rivas, a FARC nurse at the Conejo camp, says that during the war, she had three abortions.

"It was our duty," she says, "because having a baby would have put our lives and those of our comrades in danger."

Some children were born to FARC women, although the total number is unclear. A few grew up in FARC camps located far from combat zones. But most newborns were given up to family and friends in informal adoptions.

Jenny Cabrales, who joined the FARC at age 16, says she didn't realize she was pregnant until it was too late for an abortion. She was allowed to keep her infant daughter for just 20 days before turning the baby over to her parents. As the war dragged on, she didn't see her child again for 10 years.

Cabrales hopes to reunite with her now 15-year-old daughter once she has disarmed. Still, she laments their many years apart. "I never changed her diapers, never gave her a bath, never nursed her," she says.

With the FARC demobilizing, the restrictions on having kids have been lifted and rebel couples are taking advantage. The Conejo camp is home to two babies; six rebel women here are pregnant. One of them is Rivas, the nurse. This time she is determined to keep her baby.

"Things are changing," she says. "Now you can be with your children. They can grow up with you. They can be by your side."