Accessibility links
Emmanuel Macron's Unconventional Candidacy Stems From An Unconventional Life : Parallels The French presidential candidate has always gone against convention, his biographer notes. He married his high school drama teacher and entered the political fray as a little-known outsider. 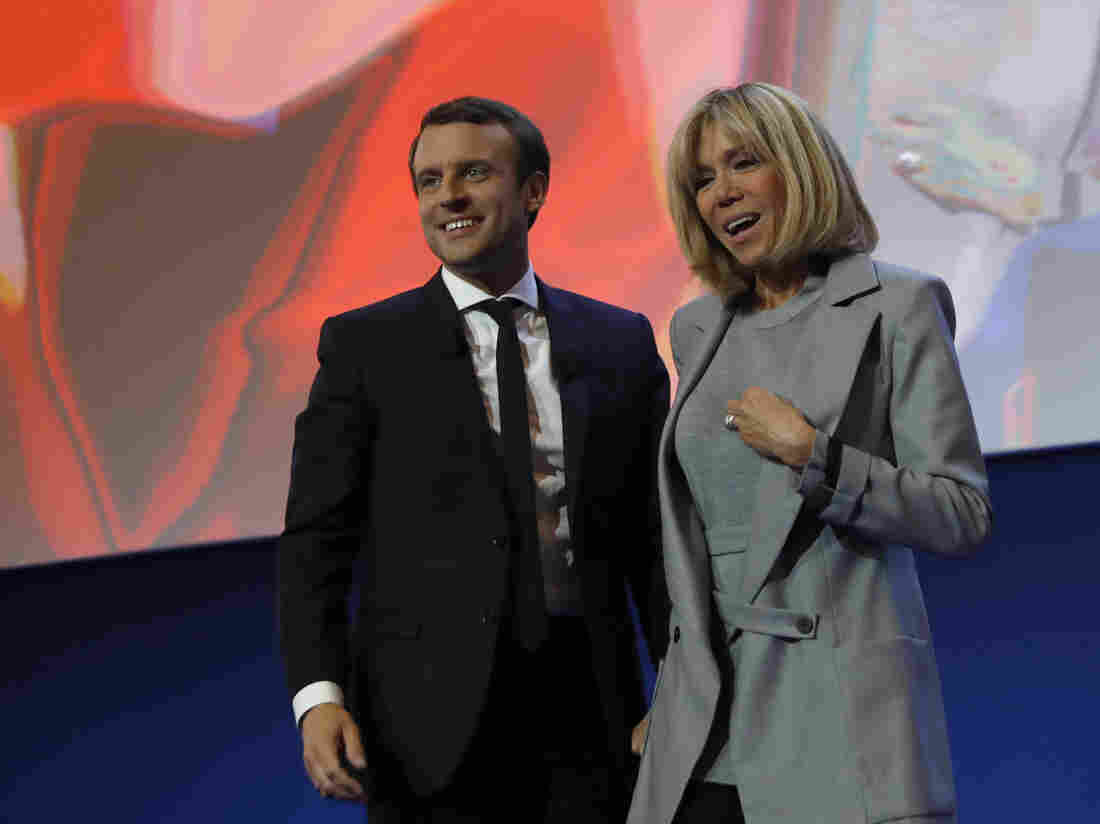 French presidential election Emmanuel Macron and his wife Brigitte met and fell in love when she was his high school drama teacher. They married in 2007. Patrick Kovarik/AFP/Getty Images hide caption 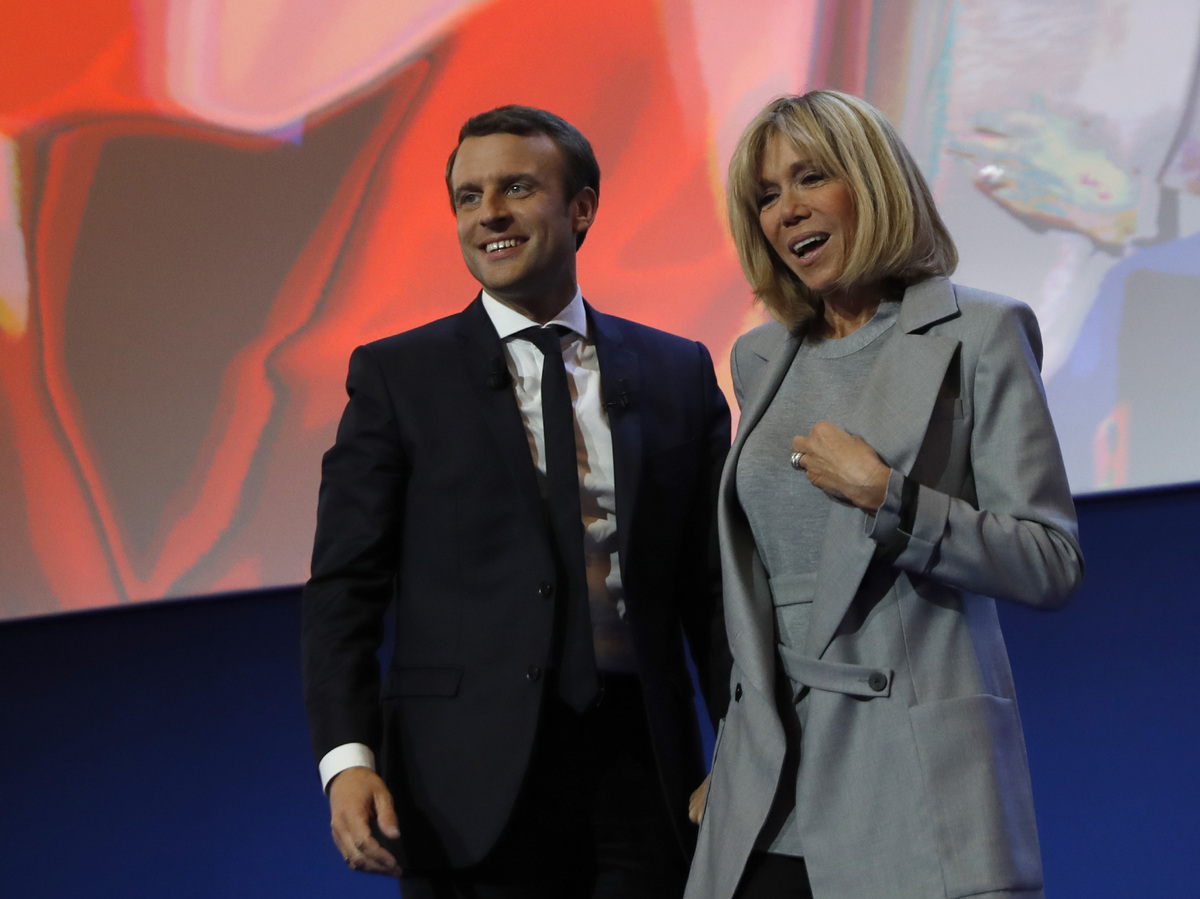 French presidential election Emmanuel Macron and his wife Brigitte met and fell in love when she was his high school drama teacher. They married in 2007.

"Emmanuel Macron was never a kid like the others," says French journalist Anne Fulda, who has just written a biography about the presidential contender titled Emmanuel Macron, un jeune homme si parfait, translated as "a young man so perfect."

Macron loved to read and existed slightly in his own world, she says. He always felt at ease and mixed easily with adults. Macron's most formative relationship growing up was with his grandmother.

Macron, 39, has said that it was his grandmother who helped him believe in his political destiny.

At 15, Macron fell in love with his high school drama teacher, Brigitte Auzière. She was married with three children — and 24 years his senior.

Now 64, she is married to Macron and set to become the first lady of France.

In the recent television documentary Emmanuel Macron — The Strategy of a Star, Brigitte Auzière Macron says she never felt the age difference between them. She describes the bond that first formed when they worked together to rewrite a play.

"We wrote together every Friday," she says in the film, "and little by little, I became completely subjugated by the intelligence of this young man. His mind is so full and perfect. His capacities are completely beyond any normal human being's."

Years later, Auzière confided to a friend that she had the feeling she was "working with Mozart."

Macron's parents were shocked when they found out about the relationship with his teacher. They asked Auzière not to see their son again until he was 18.

Biographer Fulda says the story is like something right out of the classic French novels by Balzac or Stendhal that Macron devoured as a child. Fulda says his relationship with Auzière caused a complete scandal in the small, provincial city of Amiens in northern France.

"You've got to imagine that this story begins in a provincial city, where everybody knows what everybody does, everybody speaks," says Fulda. "So it's difficult to live this story in a small city like Amiens. And especially because Brigitte Macron comes from a prominent and well-established family that has a chain of shops specializing in macaroons."

Macron's parents sent him to Paris to finish secondary school at one of the country's best high schools. But his bond with his former teacher only became stronger.

"They spoke for hours on the phone every day," says Fulda. "And Emmanuel told Brigitte, 'I will be back for you. Whatever you do, I will marry you.' "

In a video from the reception, the handsome young groom thanks the guests for their support over the previous 13 years.

"We're not exactly a normal couple," he says. "But you have accepted us and stood by us — and we exist, thanks to you."

Macron has said his parents initially "took it badly."

"Strength of conviction was required," he told Fulda. "They thought on several occasions that it was going to stop and naturally did everything to encourage that. ... You have to learn to fight for things, to bear the burden and have a life which does not in any way correspond to other peoples' lives."

Fulda says the experience is important in showing who Macron is today.

"To decide to run for president when nobody knows you — it's quite incredible," she says. "It's a sort of way to act against the system."

French voters go to the polls Sunday to choose their next president. Unless there are huge surprises, Macron is expected to beat far-right leader Marine Le Pen.

He has never been elected to political office. Those who know him say his trajectory is a combination of brilliance, ambition and luck.

Alain Minc, a business consultant who has known Macron for 15 years, says when Macron decided he wanted to seek the presidency, Minc advised him to prepare his presidential bid for the next time around.

"I told him, 'You want to go too quickly,' " says Minc. "I told him, 'You should not run in 2017, you should run in 2022 and you should prepare it now.' And his answer was fascinating. He told me, 'You are describing the world of yesterday. Now it doesn't work like that. You are wrong.' And he was right!"

Even though he's a political outsider, Macron is a pure product of the French system. He went to all the best French schools, including the esteemed École Nationale d'Administration, whose alumni include virtually every French president.

He worked as an investment banker and was an economic counselor at the Elysèe Palace when President Francois Hollande tapped him to be economy minister. Macron stepped down from his post two years later, disillusioned by what he felt was a dysfunctional system. He founded a political party and launched his presidential bid last August.

Macron's explosion onto the French political scene is as unusual as his personal life. In recent months, he's addressed packed rallies across the country. His message of engagement is in sharp contrast to his opponent's. Le Pen says she wants to close borders and close off from the world to protect the French from globalization and terrorism.

In a televised debate this week, Macron told Le Pen he rejected her message of defeatism.

"I bring the spirit of French conquest," he said. "France has always succeeded because it is part of the world. Our language, history and civilization shine out across every continent. And this global force is why we are the world's fifth largest economic power."

Macron's wife sits in the front row of every rally. The two are said to have an intimate personal and political relationship. He calls her his "equilibrium." He is also said to have an affectionate bond with her three grown children and seven grandchildren.

"I always tell him, you must have a contract with God," he says.

Minc says Macron's fortunes rose as every mainstream and establishment politician was swept away. But Macron knows how to seize his chance.

"When fate knocked, he was bold enough to take advantage of it," says Minc. "He was talented and lucky. That was exactly what Napoleon Bonaparte asked from his generals. Talent and luck."