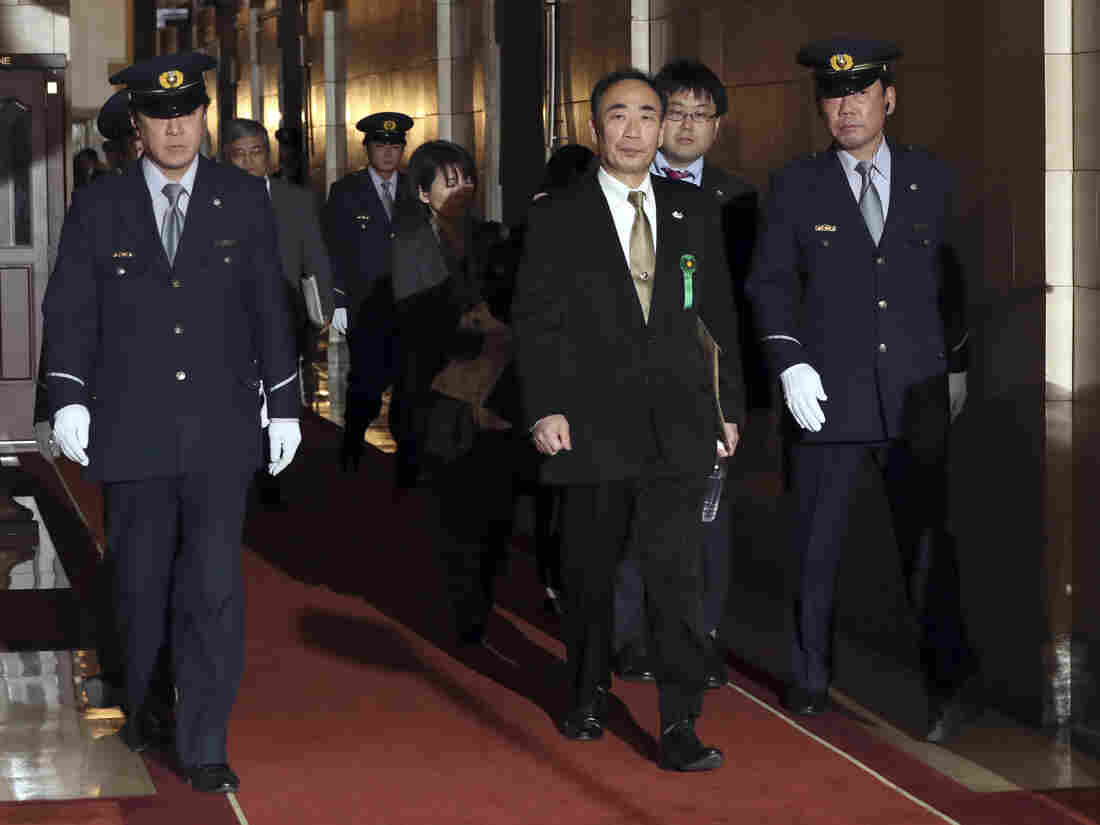 Yasunori Kagoike (center) head of an ultra-nationalistic Japanese school operator, walks through the hallway after testifying before an upper house panel at the parliament in Tokyo on March 23. Eugene Hoshiko/AP hide caption 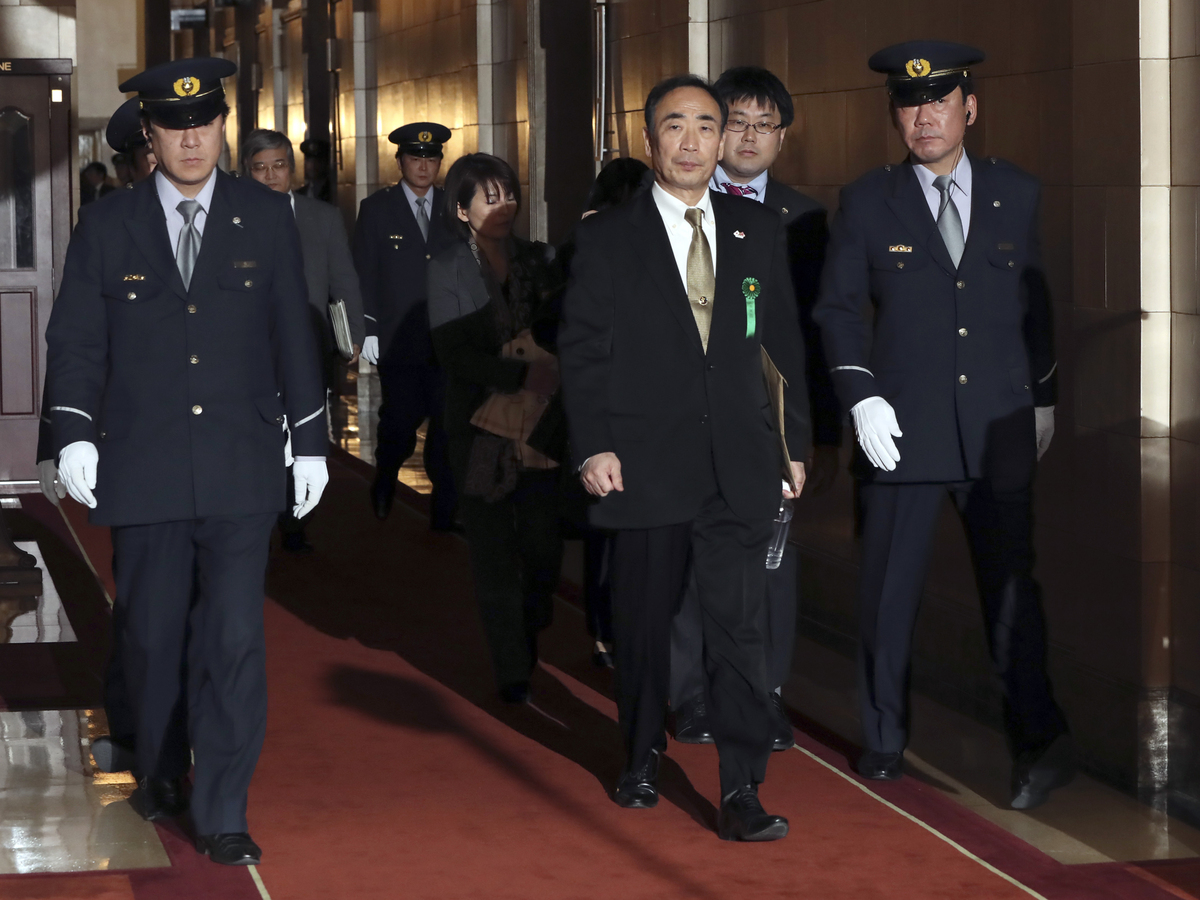 Yasunori Kagoike (center) head of an ultra-nationalistic Japanese school operator, walks through the hallway after testifying before an upper house panel at the parliament in Tokyo on March 23.

On a back street in Osaka, the sound of schoolchildren floats out of Tsukamoto Kindergarten. A cuckoo clock and a stand of bamboo sit in front of the school building's orange facade — and Astro Boy, a cartoon figure, looks down from a window.

From its exterior, there's no visible sign that the school is at the center of a scandal on which the leader of Japan has staked his political future.

The school's owner is accused of using his relationship with Japan's first family to secure a plot of land for a new, right-wing primary school at a massive discount.

Despite the scandal, Tsukamoto Kindergarten's traditional teachings have been an attraction to some parents.

"I decided to send my son there because they teach shogi [Japanese chess] and kendo [Japanese swordsmanship]," says parent Mrs. Sakamoto. "And they serve nice lunches." Mrs. Sakamoto asked that we not use her full name in order to protect her 5-year-old son, who was forced to leave the school after she got into a dispute with the school's management.

Sakamoto says discipline at the school was strict. Kids were only allowed to use the bathrooms at certain times. After attending the school, she adds, "My son became well-spoken and well-behaved. And his posture straightened up."

One thing that made Sakamoto uncomfortable was that the kindergarten made kids memorize and recite an imperial decree, issued in the name of the Meiji Emperor in the year 1890. Called the Imperial Rescript on Education, it teaches the kids Confucian virtues: respect your parents; work for the public good.

"I think it's dangerous," she says. "There may be some good things in it, but in the end, it says you should die for the sake of the emperor."

Sakamoto explains that the decree is in classical Japanese, and most students and parents didn't understand its meaning. So, although she didn't like her child reciting it, she let it go.

"Should emergency arise, offer yourselves courageously to the State," the document reads, "and thus guard and maintain the prosperity of Our Imperial Throne coeval with heaven and earth."

The U.S. occupied Japan after World War II. It drafted a new constitution, reducing the emperor to a figurehead. And it banned the decree's recitation.

The decree is controversial because it laid the ideological basis for half a century of Japanese militarism that cost millions of lives. It instructs students to behave as the emperor's obedient subjects without individual rights.

Last month, Japan's cabinet reversed its position and allowed the use of the edict as a teaching material. Japanese conservatives have welcomed the decision.

Prime Minister Shinzo Abe has expressed support for the kindergarten. His wife, Akie, served for more than a year as its honorary principal.

The kindergarten's founder, Yasunori Kagoike, testified before parliament that Abe donated $9,000 through his wife, although Abe denies this.

Kagoike, Abe and most of Japan's cabinet ministers are all members of the right-wing Japan Conference, or Nippon Kaigi, which shares Abe's conservative agenda.

Abe's government has played down school textbook references to the Imperial Army's use of sex slaves during World War II and the 1937-1938 Nanking Massacre, in which Japanese soldiers slaughtered as many as 300,000 civilians and Chinese troops who had surrendered, and raped tens of thousands of women.

The Abe government promotes patriotic education, defined as strengthening national identity, promoting the government's "positive" view of history and promoting use of the national flag and anthem, among other priorities. It has loosened postwar constitutional restrictions on deploying Japan's military overseas. And Abe wants to replace the current constitution with one that puts public security before individual rights.

"It seems if you're ideologically close to the prime minister, and have a good personal relationship with the spouse of the prime minister, then doors open mysteriously," says Sophia University political scientist Koichi Nakano. He's referring to the allegations of corruption that are at the heart of this scandal.

Last year, when Yasunori Kagoike acquired state-owned land to build his new elementary school, he got a nearly 90 percent discount. The government explained that it was because the land was polluted. Kagoike told opposition party lawmakers that the government saw his as a "special case."

"I told the person in charge of our case at the finance ministry that I was reporting back to Mrs. Abe about the process," he said. "I figured this is what resulted in our 'special case.'"

As the scandal began to hurt the government, nationalist politicians who once supported Kagoike dropped him "like a hot potato," says political scientist Nakano. Nippon Kaigi officials began to distance themselves from Kagoike after the scandal broke in early February. The Abes distanced themselves in February, too.

Tokyo-based freelance journalist Tamotsu Sugano argues that politicians' support for Kagoike was an alliance of convenience.

"They just wanted to avoid being labeled as liberals," he asserts.

For now, there's no hard proof that either of the Abes influenced the decision. The finance ministry says it destroyed government records of the land sale. By law, the government is entitled to destroy some records after one year.

She plans to do just that in court. She admits, though, that if political influence played a role in the land sale, it might not have been recorded in government documents.

"He's got a Teflon coating," says Nihon University political scientist Tomoaki Iwai. He says that Abe's ambition is to stay on and preside over the opening of the 2020 Tokyo Olympics.

Abe's ratings remain high, Iwai says. And he faces no challengers from within the ruling or opposition parties.

"Since the start of Abe's term, people supported him for his leadership and his policies," he says. "But in the last two years, polls show people support him mainly because there's no alternative."

The only problem, Iwai says, is that Abe has promised to resign if he's found to have had any involvement with the land deal. And if a smoking gun is ever found, he might have to do just that.