Accessibility links
For Palestinian Hikers In West Bank, A Chance To Enjoy Nature And Escape Tensions : Parallels "To walk for three or four hours without checkpoints, without seeing soldiers ... it makes you feel, somehow, you can feel some free," says a hiker. There are scores of Palestinian hiking clubs. 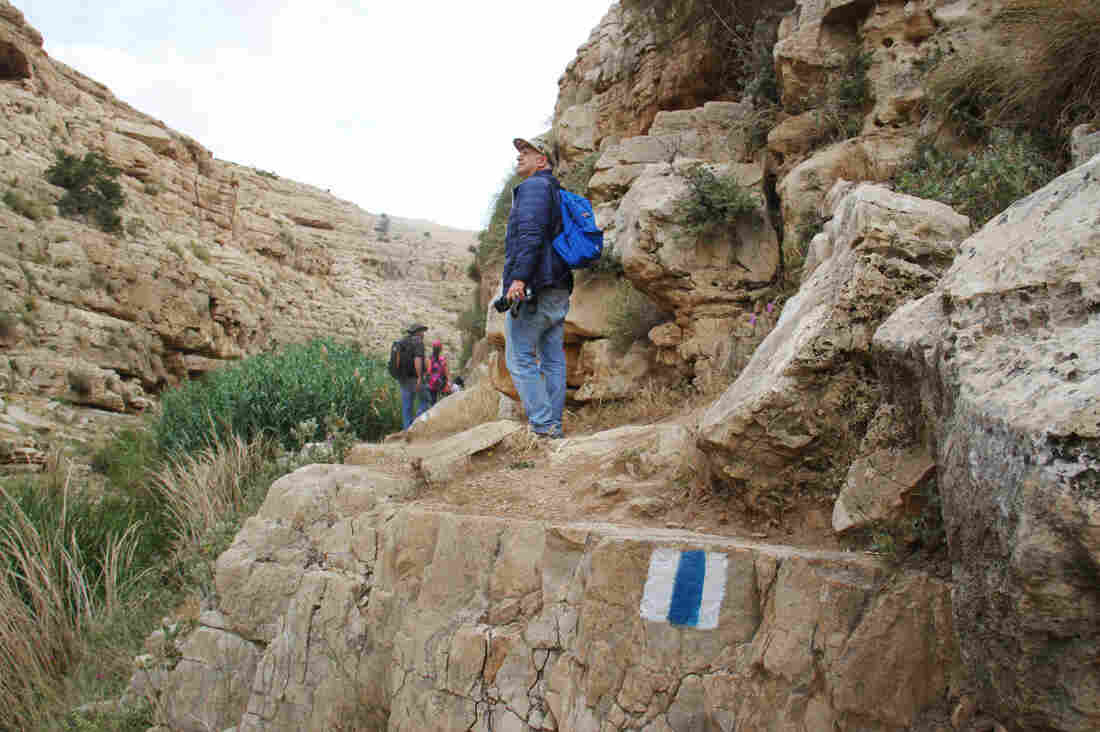 Ibrahim Habash walks with one of the many Palestinian recreational hiking groups that have sprung up largely in the last decade. The Israeli trails network, with its blue and white markings, extends into the West Bank, and Israeli and Palestinian hikers often cross paths on the same trails. Daniel Estrin/NPR hide caption 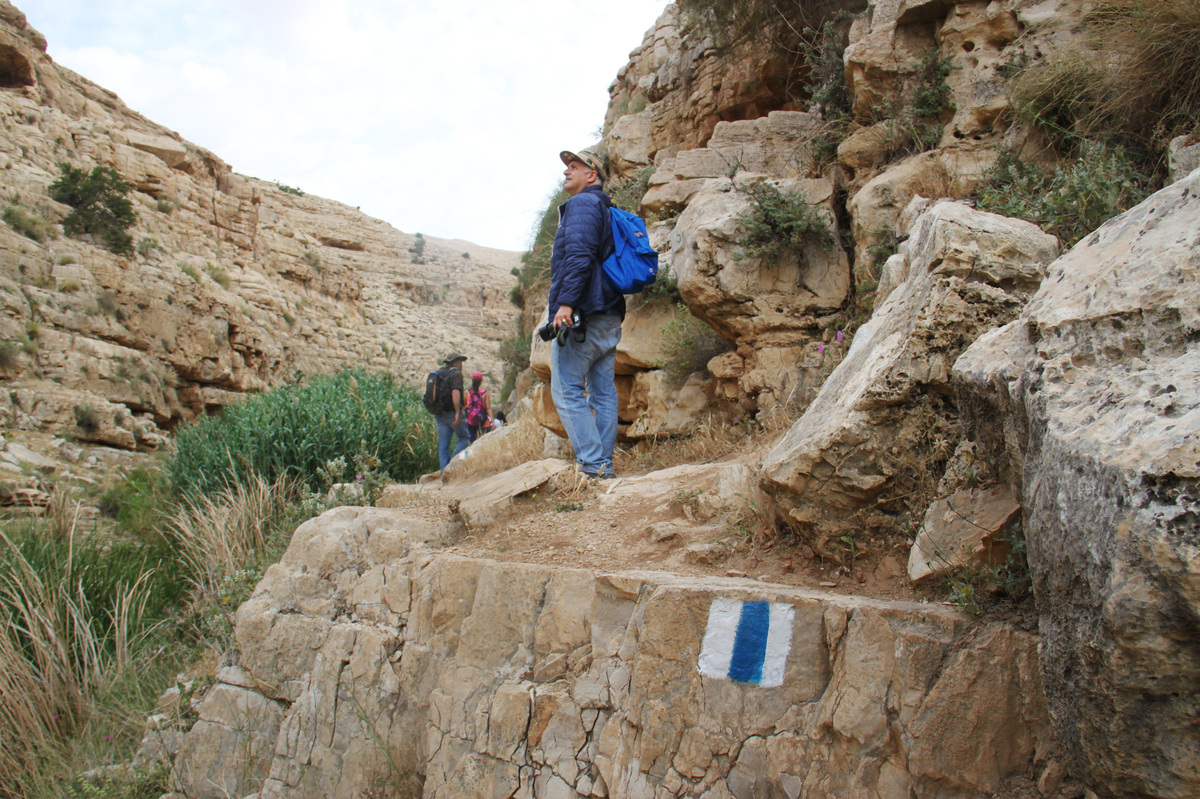 Ibrahim Habash walks with one of the many Palestinian recreational hiking groups that have sprung up largely in the last decade. The Israeli trails network, with its blue and white markings, extends into the West Bank, and Israeli and Palestinian hikers often cross paths on the same trails.

The hikers pile out of minivans on the side of a serpentine highway, climb a dusty hill, pass a Bedouin woman preparing morning bread in a tent, then turn the corner and find themselves embraced by the desert hills — a world apart.

There are about 20 of them, nearly all Palestinians, ranging in age from their late 20s to 60s, wearing backpacks and hats, some carrying trekking poles and large cameras. Among them is an alternative medicine practitioner, an occupational therapist, a retired United Nations worker and a Palestinian-American customer service professional.

Outdoor exploration is a weekly Friday morning ritual for the group, which calls itself Shat'ha, or "Picnic" in Arabic – one of scores of informal Palestinian hiking groups that have sprung up in recent years.

Their home, the West Bank, is a hikers' paradise: mountains shimmering with olive trees, exquisite views, natural springs, vineyards, desert expanses and historic ruins at nearly every turn. The Palestinian hiking groups aim to enjoy that nature, but also to escape the tensions of life under Israeli military occupation and display ownership over the land they walk.

"To walk for three or four hours without checkpoints, without seeing soldiers, something like this, it makes you feel, somehow, you can feel some free," says Ammar Jawdat, 28, a lawyer. He walked through a dry riverbed with his wife and warned fellow hikers of snakes.

The West Bank is a well-trodden land, conquered by many peoples throughout the centuries. In 1967, Israel captured the territory, and today, hundreds of thousands of Israelis have planted roots in Jewish settlements, many of which are near Palestinian cities and villages or on land Palestinian families claim as their own property. Palestinians want them out, and want the land to create an independent country of their own – a country named Palestine.

In West Bank, Israeli And Palestinian Archaeologists Both Lay Claim To Heritage

Life in the West Bank is tense. That is why four Palestinians started the Shat'ha club about 11 years ago. They wanted to get some fresh air after the violence of the Second Intifada, a Palestinian uprising against Israel that brought scores of attacks on Israelis and military incursions into Palestinian cities.

"Nature ... gives me a lot of power. I found it a very important thing in my life," says Juwana Rafidi, the hiking organizer for the day, wearing a tan sunhat.

For Israelis, hiking has long been a popular pastime. It stretches back to the 1920s, before Israel became a state, when Zionist youth movements organized group hiking trips as a way to get to know the land of the Bible and stake claim to their spiritual homeland.

Palestinian hiking clubs embrace a similar nationalistic ethos. One Palestinian hiking group even makes a point of carrying a Palestinian flag when hiking in the West Bank. The Shat'ha group has a strict rule for its Palestinian hikers: No Israeli food products — whether they be Hebrew-labeled packs of crackers or Israeli-grown apples — are allowed on the trek. 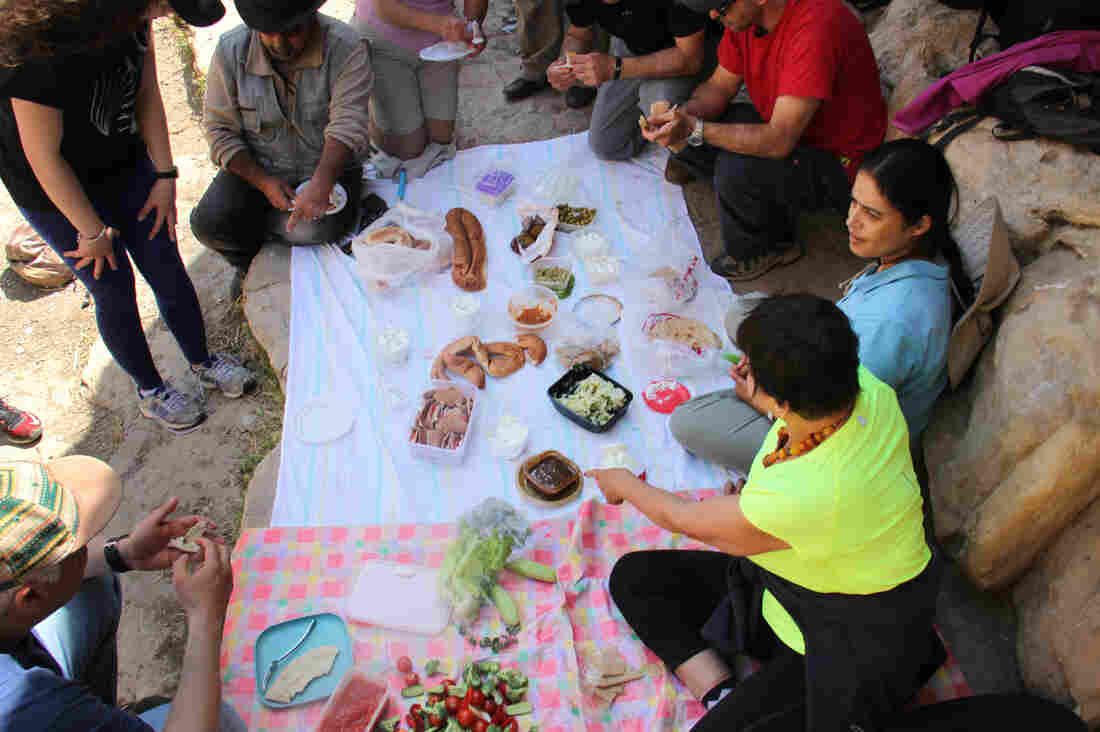 Hikers spread tablecloths on the rocks for an al fresco meal as part of a Shat'ha ("Picnic") group hike. Daniel Estrin/NPR hide caption 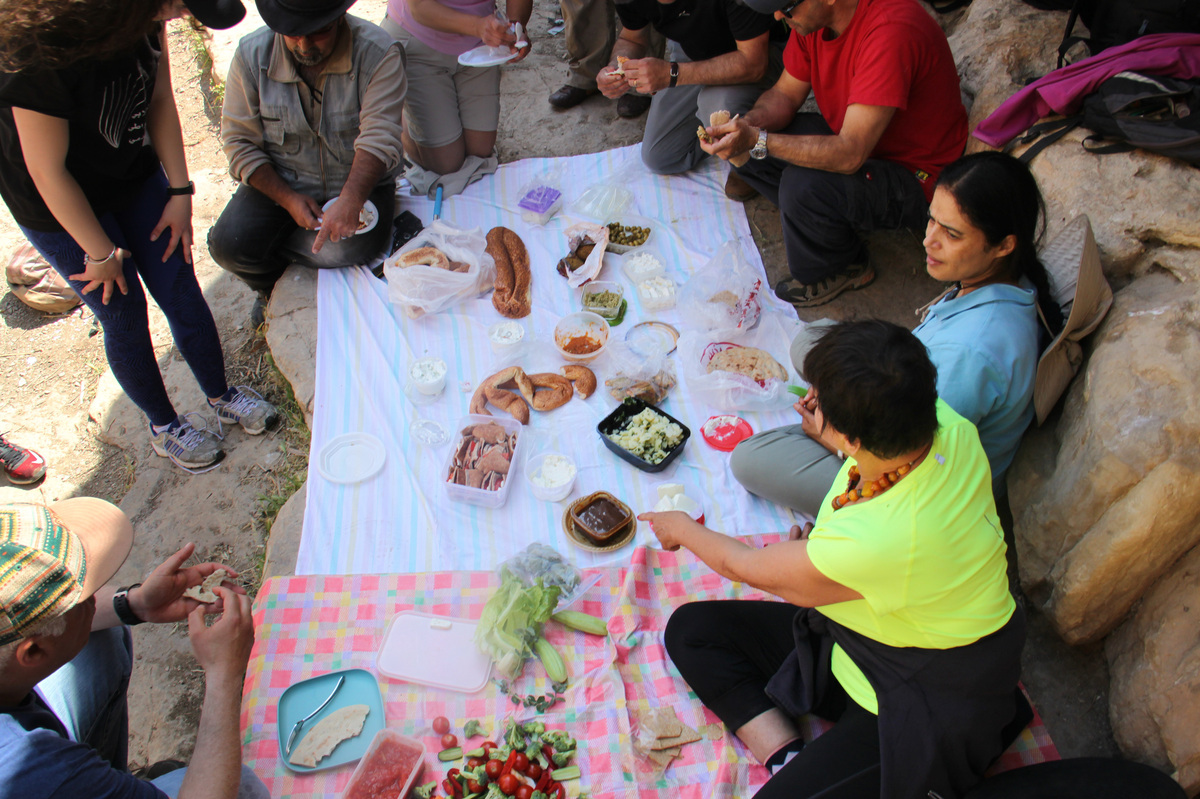 Hikers spread tablecloths on the rocks for an al fresco meal as part of a Shat'ha ("Picnic") group hike.

Today, there may be as many as 70 grassroots Palestinian hiking clubs, says Shay Rabineau, an assistant professor at Binghamton University and expert in Israeli and Palestinian hiking. The groups have names like "Wild Palestine," "Palestinian Women Hikers Club" and "Walk and Get to Know Your Country."

Wandering the outdoors has always been a part of local culture, whether to shepherd flocks or to gather wild sage and thyme. Writer Raja Shehadeh began taking walks in the West Bank hills in the late 1970s, as he recounts in his 2008 book, Palestinian Walks: Forays into a Vanishing Landscape.

But organized Palestinian recreational hiking groups — for those with the means to afford the leisure time — have sprung up largely in the last decade, following the Second Intifada, when people felt it was safer to wander the West Bank. The recent boom in Palestinian hiking has been led by local Palestinians, Rabineau says.

"It's not a copy or an import; it's taking on a character all its own," he says.

Meanwhile, a Palestinian nonprofit organization, Masar Ibrahim al-Khalil – with help from the international Abraham Path initiative , which is spearheading a project to create one long walking trail across the Middle East – has completed marking the first Palestinian long-distance trail across the West Bank, including in Area C, where the Israeli military has full control.

The Masar Ibrahim al-Khalil organization also runs weekend hikes catered to international tourists, led by Palestinian tour guides and with lunch served in Palestinian family homes. Throughout the Middle East, there are efforts to create hiking trails to attract tourism, from the Lebanon Mountain Trail to the Jordan Trail to Egypt's new Sinai Trail. 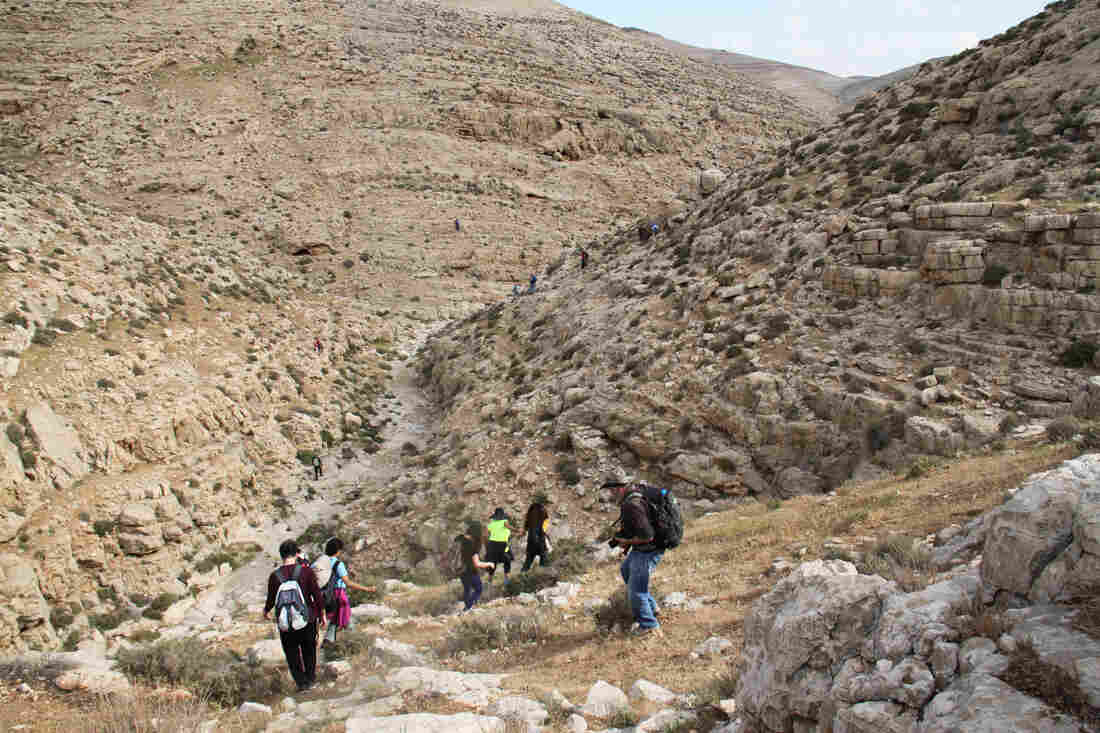 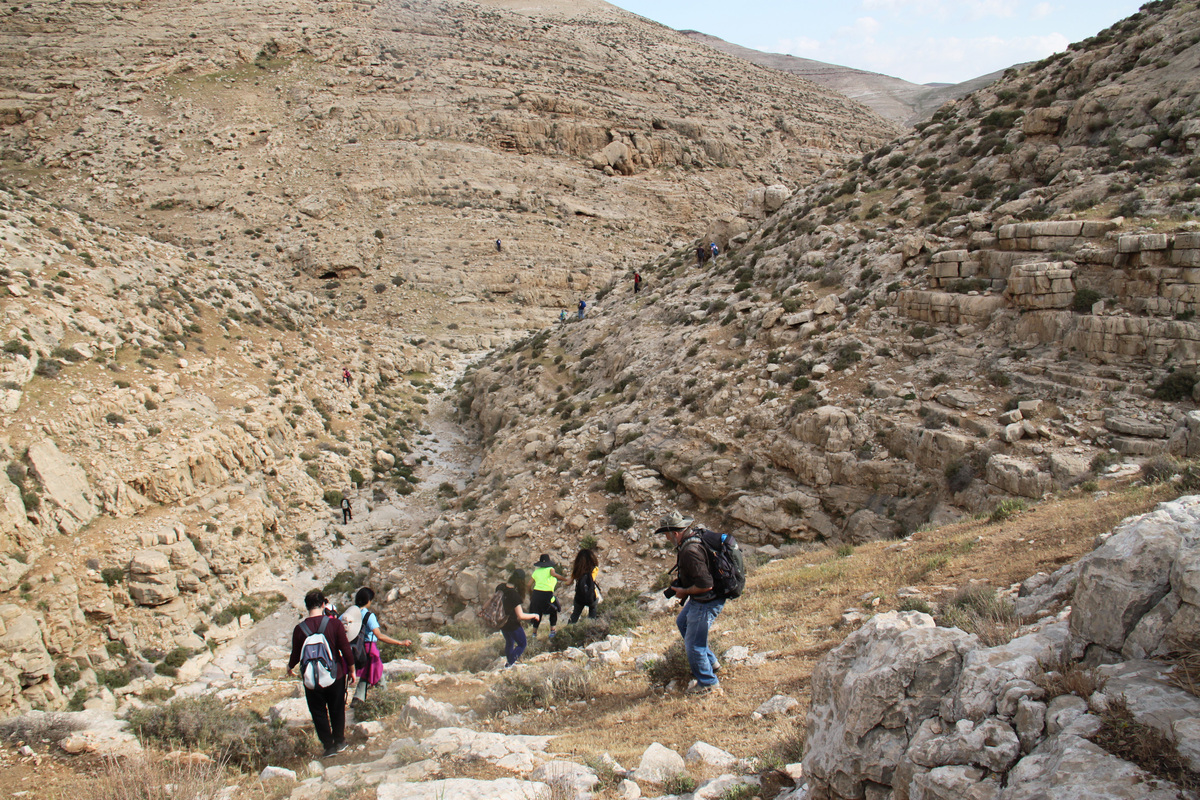 Today, there are scores of grassroots Palestinian hiking clubs.

About three years ago, Shai Yagel, then the trail-marking coordinator for Society for the Protection of Nature in Israel, was creating a new trail in the West Bank when he came across what he called "pirate markings" — a trail marked by amateurs without permission.

He thought it was created by settlers. Settler organizations, he says, tended to pressure him to blaze new trails in areas he felt were too close to Palestinian cities and posed a security risk for Israeli hikers. He erased the trail, and called a settler group to complain.

A few days later, he was contacted by a representative of Abraham Path, who said his Palestinian counterparts had forged that trail – and were certain Israeli authorities had destroyed it to spite the Palestinians.

"In the West Bank, no matter what you do, people are sure it was political. You move a rock ... and someone thinks it's because you are for or against someone," Yagel says.

For this day's outing, the Shat'ha hiking group chose a path from the Ein Fara spring to the Ein Fawwar spring, west of the city of Jericho. The hikers amble down steep desert hills that give way to streams with fish and crabs and frogs. They spot a badger dashing across the rocks; somebody coos at it. Rafidi hums a song set to a poem by the late Palestinian national poet Mahmoud Darwish.

Every so often, an Israeli settlement perched atop a hill comes into view. So do Israeli hikers.

"Cousins," one of the Palestinian hikers says, using a euphemism Palestinians and Israelis often use to refer to each other.

"Be careful, he's armed," one of the Palestinian hikers says.

The armed man is a young Israeli, originally from Boca Raton, Florida. He's a soldier, and soldiers are required to carry their weapons even when off duty. He says he feels safer armed when he's hiking in this part of the West Bank.

"It's not like I expect anything to happen. It's more like a safety. But yeah, I definitely feel safer," he says, giving his name as Avishai before he sets off with his friend, who's from an Israeli settlement nearby.

The Palestinian group spreads a tablecloth on the ground for a picnic of grape molasses mixed with tahini, tomatoes with garlic and spicy shanklish cheese.

After the picnic, they hit the trail again and pass another Israeli trekker.

"Where are you from?" the Israeli asks.