Accessibility links
For Family Of Embattled Chinese Lawyer, A Long Road To Safety — With U.S. Help : Parallels U.S. diplomats staged a rare intervention to rescue the family of a Chinese human rights lawyer. It offers clues, and raises questions, about the Trump administration's human rights approach in China. 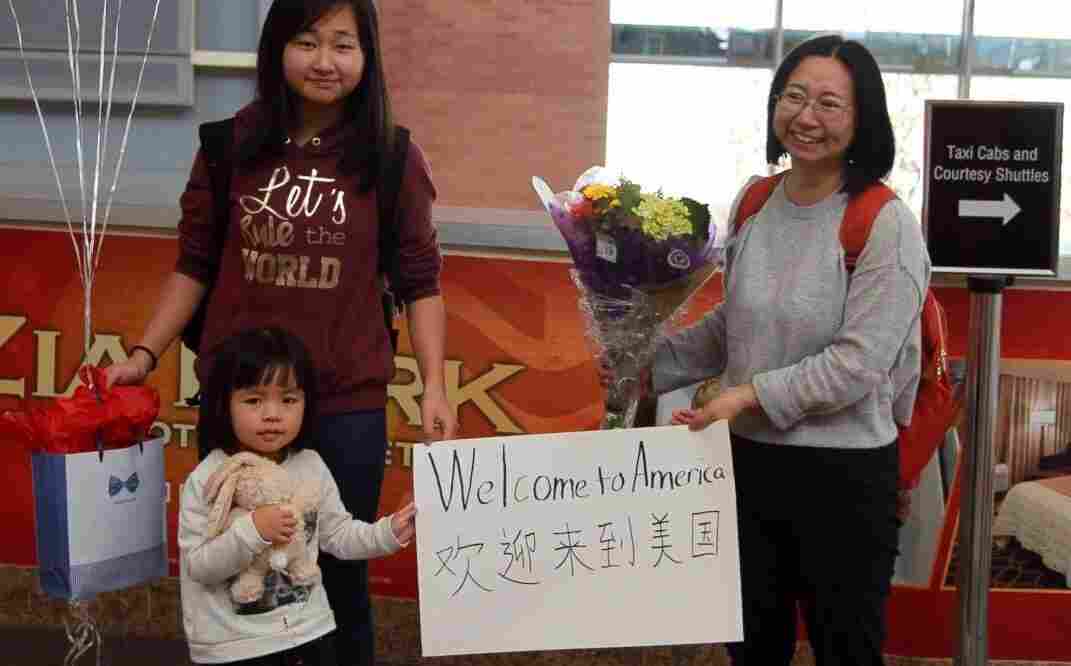 In this photo from March 17, released by China Aid, Chen Guiqiu (right) holds a welcome sign with her daughters Xie Yajuan, 15, and Xie Yuchen, 4, after arriving at an airport in Texas. Chen's husband, lawyer Xie Yang, was charged with inciting subversion. Courtesy of ChinaAid hide caption 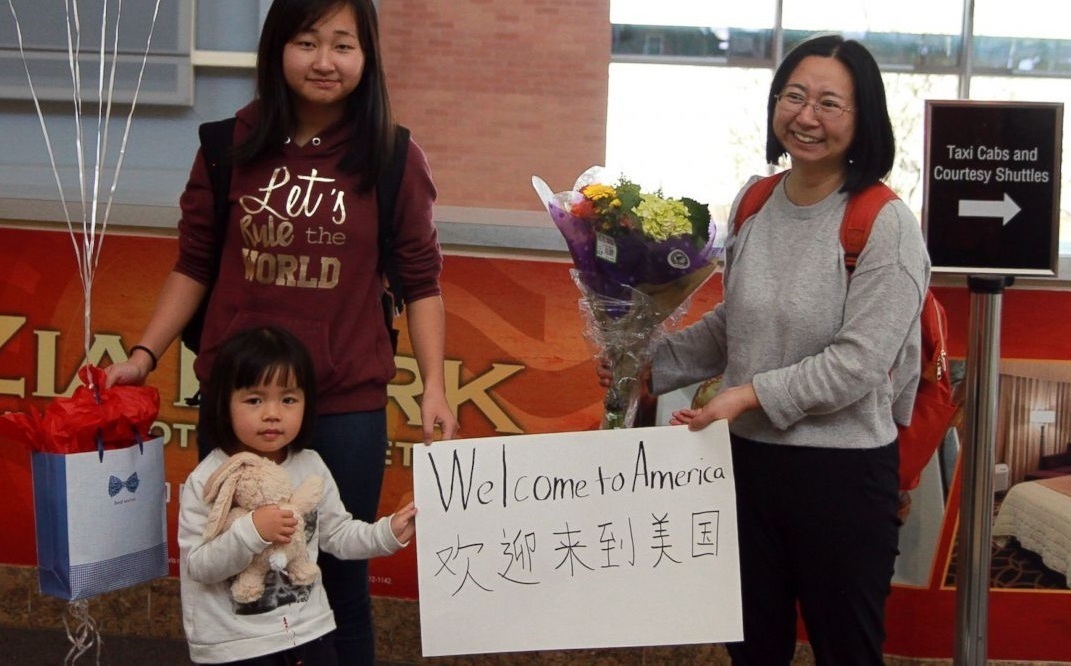 In this photo from March 17, released by China Aid, Chen Guiqiu (right) holds a welcome sign with her daughters Xie Yajuan, 15, and Xie Yuchen, 4, after arriving at an airport in Texas. Chen's husband, lawyer Xie Yang, was charged with inciting subversion.

U.S. diplomats staged a rare intervention to rescue the family of a human rights lawyer held in China. The attorney was released last week, after having been swept up in a two-year-old crackdown that has put most of the country's rights lawyers and legal activists out of business.

Human rights groups have been watching to see whether the Trump administration will take a more or less muscular approach to human rights in China than their predecessors, and this case highlights some of the issues at stake.

The target of the rescue was Chen Guiqiu, a professor of environmental science, and the wife of human rights lawyer Xie Yang.

Chen had fled China with the couple's two daughters in February, fearing for their safety. They snuck into Thailand, but local authorities raided their safe house and detained them.

On March 2, Chen was locked up in a Bangkok immigration jail.

"I couldn't communicate with the outside world," Chen recalls. "I was worried, almost in despair, and in my heart, I was praying to God."

A group of Chinese government agents milled outside the front gate of the jail, waiting for Chen to be deported so they could take her back to China. This is according to Bob Fu, president and founder of China Aid, a Midland, Texas-based organization that describes itself as a "Christian human rights group."

But action by Fu's group and U.S. officials caught the Chinese agents off guard, and now Chen and her daughters are in the U.S.

The unusual tale of Chen's rescue offers clues – and raises questions – about the Trump administration's approach to the issue of human rights in China.

"I pinpointed the exact prison cell that Professor Chen and the two daughters were staying in," Fu explains, before he urged the State Department and other agencies to rescue her. Within hours, U.S. officials were headed for the jail.

"The decision was already made by, I was told, the highest authorities in the Trump administration," Fu says.

Chen's youngest daughter is a U.S. citizen. This was apparently the main consideration behind the U.S. government's intervention. It is unclear whether Chen Guiqiu's Christian faith was a factor in the decision to intervene.

With the Chinese agents waiting in front of the jail, American diplomats persuaded Thai authorities to let them escort the three out a back door.

They headed to the airport, where, Fu says, Chinese agents showed up. They pressured Thai authorities not to let the trio depart the country.

"It was a major standoff, I was told," says Bob Fu, "almost a physical clash."

In the end, some kind of diplomatic deal was reached, and Chen and her two daughters flew to Texas.

Chen and Fu declined to reveal the details of the deal, citing diplomatic sensitivities and the need to protect people involved in the rescue operation.

"The Department of State takes its obligations to assist U.S. citizens abroad seriously," said Mary Beth Polley, the U.S. embassy spokesperson in Beijing. "Due to privacy considerations, we have no further comment." 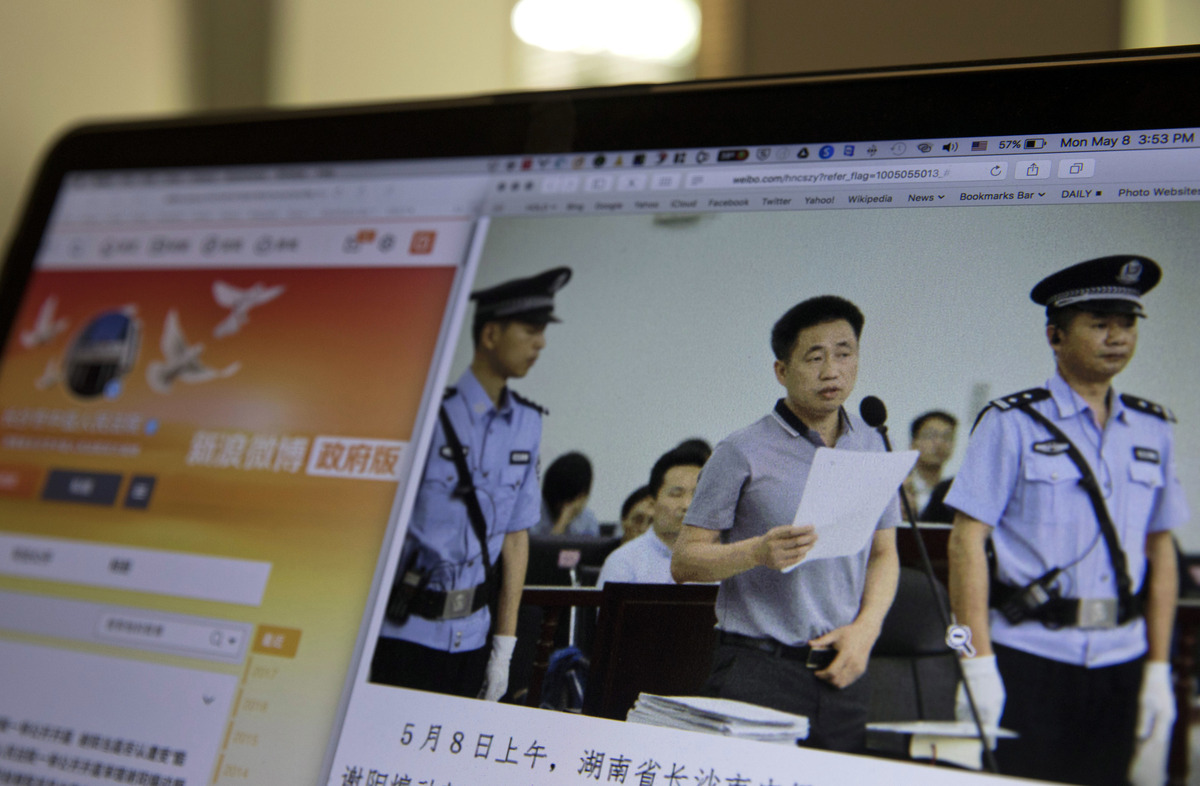 China's Foreign Ministry said it had no knowledge of the case.

Chen had fled China because she came under intense pressure from authorities after publicizing the plight of her husband. Xie Yang was swept up along with other rights lawyers in a July 2015 crackdown. The government charged him with incitement to subvert China's government.

In January, Xie alleged in a written statement that police beat him and tortured him in custody. He also wrote that that if he ever admitted his guilt or denied that he had been tortured, it was probably because he was forced to.

During Xie's trial this week, he pleaded guilty to the charges against him. A judge asked him if he had been tortured — and he replied no.

"For these words to come out of his mouth, he had to have faced some sort of coercion that he couldn't bear," Chen says. In other words, she believes that her husband was threatened or tortured into saying he wasn't tortured.

Xie has not yet been sentenced. He is out of prison on bail, but his wife says he's still not free.

Many of the other Chinese human rights lawyers swept up in the two-year-old crackdown are in a similar situation, under police surveillance and unlikely to resume their work as rights lawyers any time soon.

Chen thanks her rescuers, saying, "I felt that God had sent a messenger to help my family." She hopes she and her husband can be reunited soon in the United States.

Fu and his group have been helping people like Chen for years, but he says he's never seen anything like this.

"I really want to give credit to the Trump administration," he says. "I think it was a very daring and decisive action, reflecting really the Americans' commitment to fundamental values."

"That's what the U.S. government and other governments are supposed to do on behalf of their citizens," says Sophie Richardson, China director at Human Rights Watch.

But rights groups were concerned when, in February, 11 foreign governments wrote to China to express concern about reports that it was torturing lawyers, including Xie Yang, and the U.S. did not sign that letter.

Richardson says it's too early to say whether the Bangkok rescue is representative of a broader U.S. human rights policy.

"It's really about whether the U.S. will be comparably muscular in cases that don't involve U.S. citizens," she says.