Accessibility links
For China's 'New Silk Road,' Ambitious Goals And More Than A Few Challenges : Parallels The multibillion-dollar "plan of the century" aims to create a network of trade routes, rail lines, ports and highways, linking countries on four continents. Nearly 70 countries have signed on. 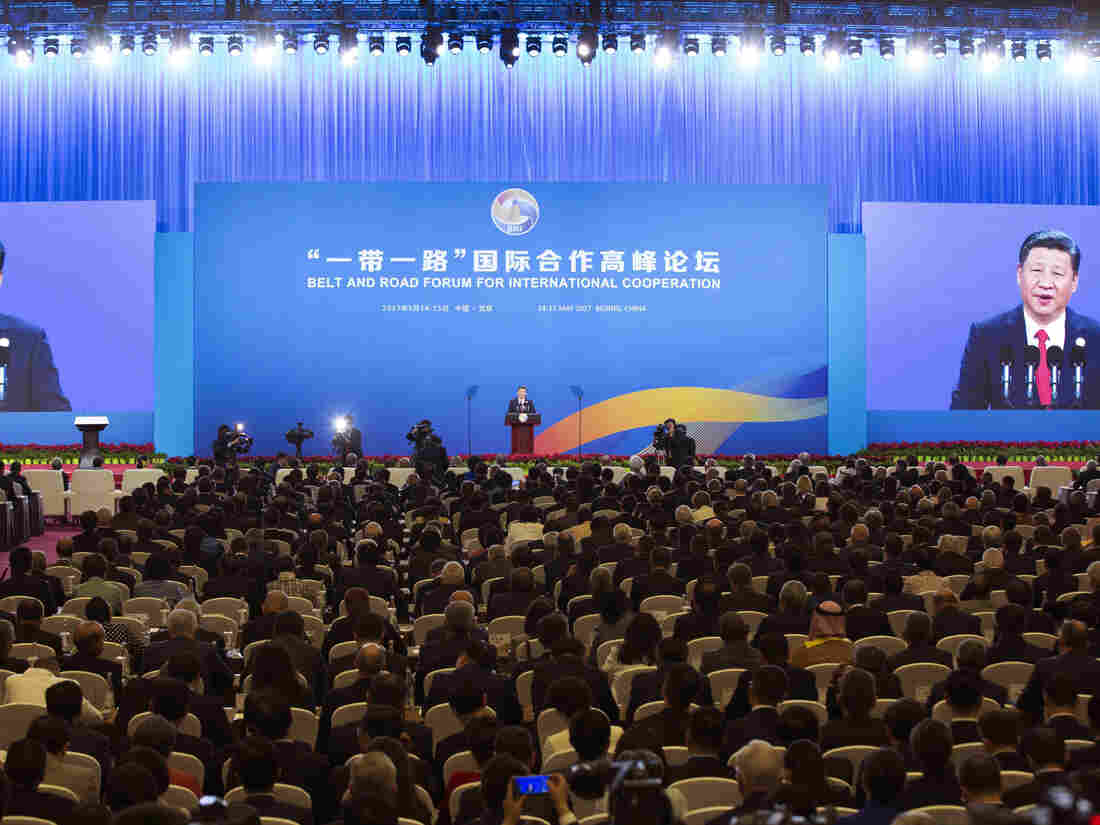 Chinese President Xi Jinping delivers his speech during the opening ceremony of the Belt and Road Forum in Beijing on May 14. Xi offered tens of billions of dollars for projects that are part of his signature foreign policy initiative linking China to much of Asia, Europe and Africa. Alexander Zemlianichenko/AP hide caption 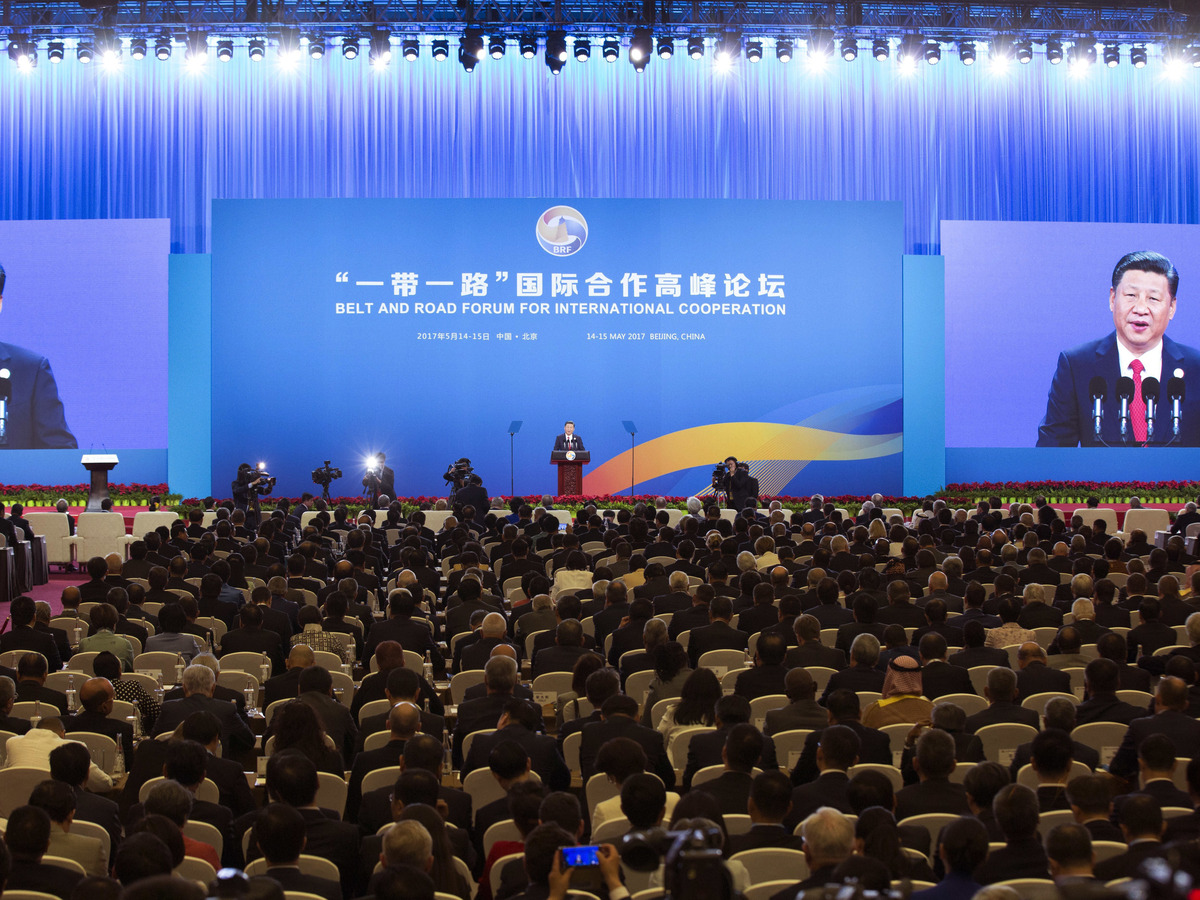 Chinese President Xi Jinping delivers his speech during the opening ceremony of the Belt and Road Forum in Beijing on May 14. Xi offered tens of billions of dollars for projects that are part of his signature foreign policy initiative linking China to much of Asia, Europe and Africa.

Over the weekend, China pledged tens of billions of dollars in infrastructure financing and development aid, and elicited support from scores of countries to promote economic integration and free global trade through the creation of what Beijing is calling a "new Silk Road."

Twenty-nine heads of state and representatives of more than 130 countries attended the two-day Belt and Road Forum for International Cooperation in Beijing. At its conclusion, leaders signed a communiqué espousing a "shared commitment to building an open economy, ensuring free and inclusive trade [and] opposing all forms of protectionism."

The plan would, in theory, create a network of trade routes, rail lines, ports and highways, linking countries on four continents. China is calling it the "plan of the century."

So far, nearly 70 countries have signed agreements with China to participate in the initiative, known as One Belt, One Road. Many of China's Asian neighbors are sorely in need of infrastructure investment and development aid.

While some details remain sketchy — and some countries are skeptical or sitting things out for now — China has elevated the plan to a national strategy. It is also President Xi Jinping's signature foreign policy.

In his opening speech, Xi described the Silk Road that connected Europe and Asia some two millennia ago, and conjured up images of camel caravans carrying goods and ideas among ancient empires.

"This part of history shows that civilization thrives with openness," he said, "and nations prosper through exchange."

(Some historians argue that the actual Silk Road differed from the mythological one described by China's current government. But no public challenges to the narrative were heard at the forum.)

Xi announced more than $100 billion in infrastructure financing for the project — some through a Silk Road Fund, some through Chinese government policy banks like the China Import-Export Bank and China Development Bank.

But he also described China as a provider of public goods and a bringer of prosperity, security and environmental protection.

"We should intensify counter-terrorism efforts, address both its symptoms and root causes, and strive to eradicate poverty and social injustice," he said.

Zhao Hong, a Southeast Asia expert at Xiamen University, says this represents an attempt by China to improve its foreign investment policies. China has only become a net exporter of capital and builder of big foreign infrastructure projects in the past decade or so, and its learning curve has been steep.

"China's cooperation has mostly been government-to-government," notes Zhao. "China did not fully consider local people's feelings about the projects. China is now in the process of adjusting these policies."

In countries such as Myanmar and Sri Lanka, citizens have opposed Chinese investments, whose terms they saw as unfavorable. Some projects have imposed onerous financing costs, which leave the countries deep in debt.

There has been little effort to assess or publicize the environmental impact of certain projects. Others have relied mostly on Chinese labor, creating few local jobs.

In countries like Myanmar and Pakistan, Chinese-backed pipelines and highways traverse areas plagued by ethnic insurgencies, necessitating spending on security for the projects and raising concerns that they could be the target of insurgent attacks. At home, some critics point out that China is still a developing country, parts of which are mired in poverty, and cannot afford to be so generous to other nations.

Another major concern is that China is trying to create a new international order with itself at the helm.

Xi tried to dispel such suspicions, saying, "We have no intention to interfere in other countries' internal affairs, export our own social system and model of development or impose our will on others."

He added: "We will not resort to outdated geopolitical maneuvering."

But Zhao Hong observes that China sees the Belt and Road initiative domestically as a top-priority geopolitical strategy. In recent years, he says, China has felt hemmed in by the U.S. and its ring of alliances with Japan, the Philippines and Australia — especially during the Obama administration's pivot to Asia.

"So if China could find a way out to the west," Zhao says, "then it could relieve this pressure coming from the east."

Zhao says so far, the strategy seems to be working. A change of presidents in the Philippines and the U.S. withdrawal from the Trans-Pacific Partnership Agreement, which excludes China, have helped.

An important part of the Belt and Road initiative has been to build energy pipelines directly to China's western provinces through Myanmar and Pakistan, bypassing a potential choke point in the Strait of Malacca.

"This is going to be the kind of initiative that will put an end to terrorism," Turkish President Recep Tayyip Erdogan told the Beijing forum.

India is one notable holdout. It boycotted the Beijing gathering because China's energy and economic corridor in Pakistan cuts through parts of Kashmir claimed by both India and Pakistan. China insists it takes no side in the dispute.

The U.S.'s initial skepticism toward One Belt, One Road appears to have been tempered by the participation of many of its allies and partners, such as the U.K.

"As China drives forward the Belt and Road initiative from the east," British Chancellor of the Exchequer Philip Hammond told the forum, "we in Britain are a natural partner in the west" — especially, he added, "as we leave the European Union."

Although the U.S. is not yet a member of the initiative, it sent a delegation led by Matthew Pottinger, East Asia director on the National Security Council.

"U.S. firms have a long and successful track record in global infrastructure development," Pottinger told the forum, "and are ready to participate in 'Belt and Road' projects."

China has scheduled its next summit to discuss the Belt and Road initiative in 2019. Zhao Hong cautions that for now, the initiative is largely a vision. Relatively little of the money pledged has actually been invested — and it could take decades for the plan's framework to be built out.

China conceived many of the projects long before including them under the initiative. Others, like plans for a mega-region around the Chinese capital, seem to have scant relevance to the Belt and Road.

This has not stopped China from launching a massive propaganda and marketing effort targeting foreign audiences. State-run media including the People's Daily and China Daily newspapers have all recently put out cheerful videos featuring young foreigners singing the praises of the Belt and Road initiative.