Accessibility links
On Election Day, Iran Chooses Between Gradual Reform And Conservative Return : Parallels Iran's reform-minded president, Hassan Rouhani, is up for re-election. Subtle changes in Iranian society are evident in the burgeoning tech sector. But conservatives say Rouhani has changed too much. 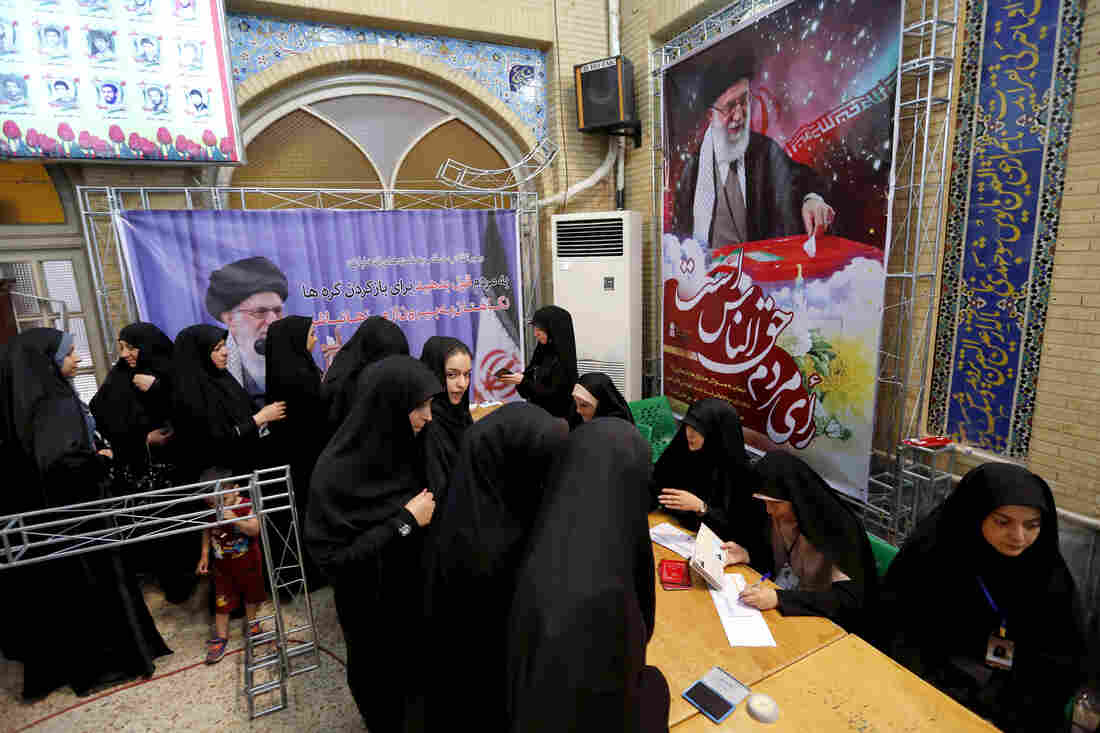 Iranian women cast their ballots for the presidential elections at a polling station at the Lorzadeh mosque in southern Tehran on Friday. Atta Kenare/AFP/Getty Images hide caption 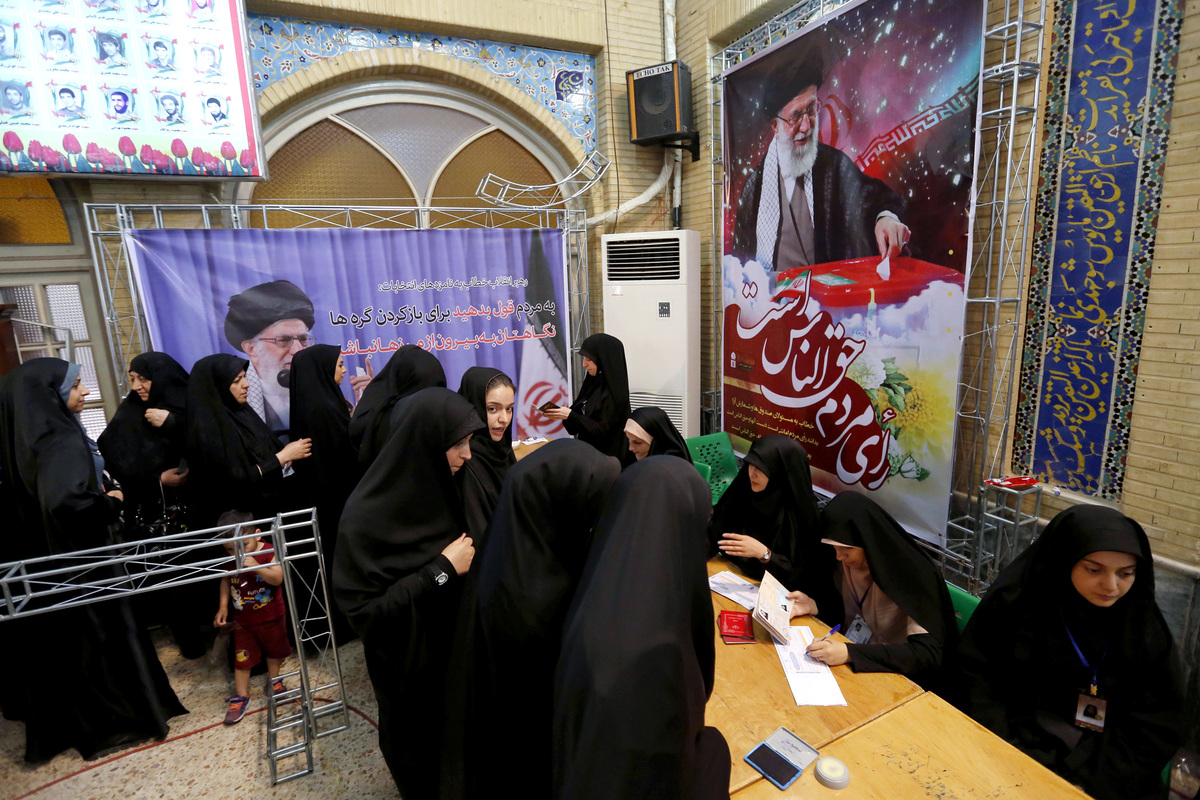 Iranian women cast their ballots for the presidential elections at a polling station at the Lorzadeh mosque in southern Tehran on Friday.

What difference does it make who's president of Iran?

It's fair to ask the question on this weekend of Iran's presidential election. After all, the president's title makes him sound like the top official, but he is not. Iran's supreme leader, Ayatollah Ali Khamenei, holds far more power.

Still, the election of Hassan Rouhani to Iran's presidency in 2013 made a difference. Iranian voters decisively declared that they wanted more openness to the world. And while the people don't have the last word in Iran — Khamenei gets that — Iran's Shiite Muslim clerical establishment had to listen in order to preserve its own legitimacy. Rouhani made a nuclear deal with the West. And now Iranians decide if they want to keep moving in his direction.

During five days in Iran, we looked for signs of how Rouhani changed the country in his first term. They were subtle. Despite the drama of the nuclear deal abroad, it's commonly said that Rouhani failed to bring greater freedom at home. Our reporting found a more complex picture: In the absence of big steps, resisted by the clerical establishment, Rouhani took small ones. 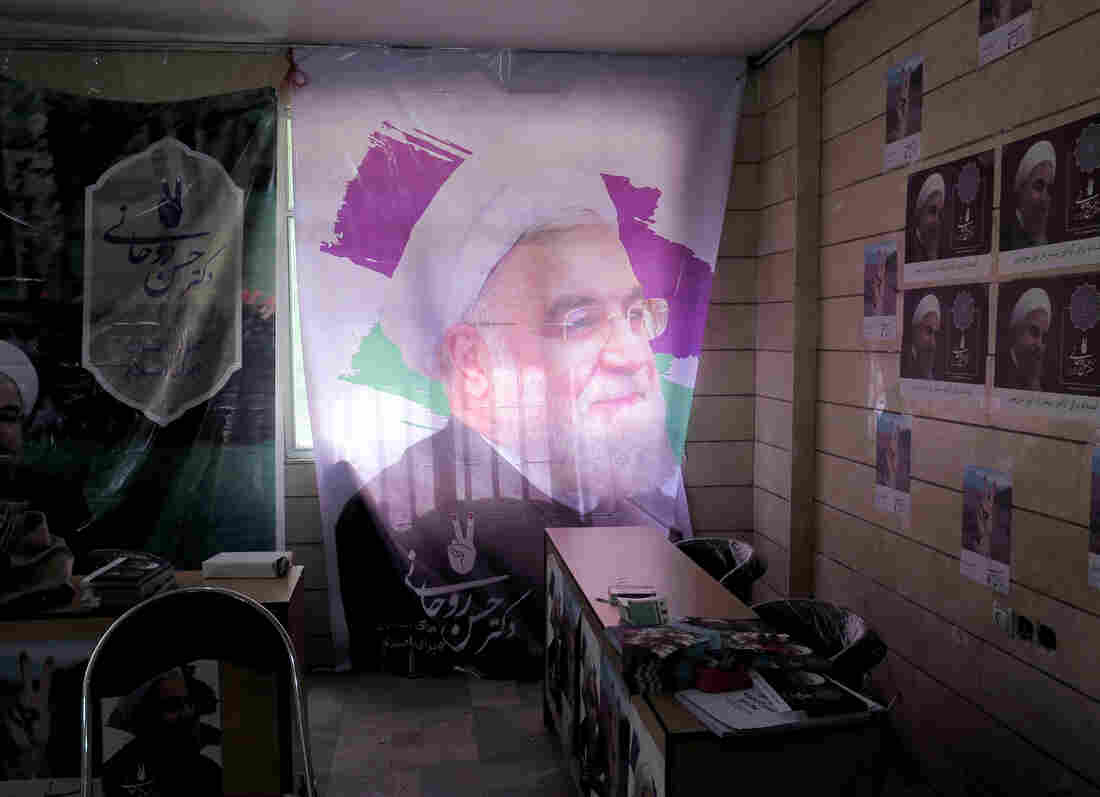 A portrait of Iranian president Hassan Rouhani hangs in a campaign office in Tehran. Iranians vote today on whether to give another four years to the president who made a nuclear deal with the U.S. Kevin Leahy/NPR hide caption 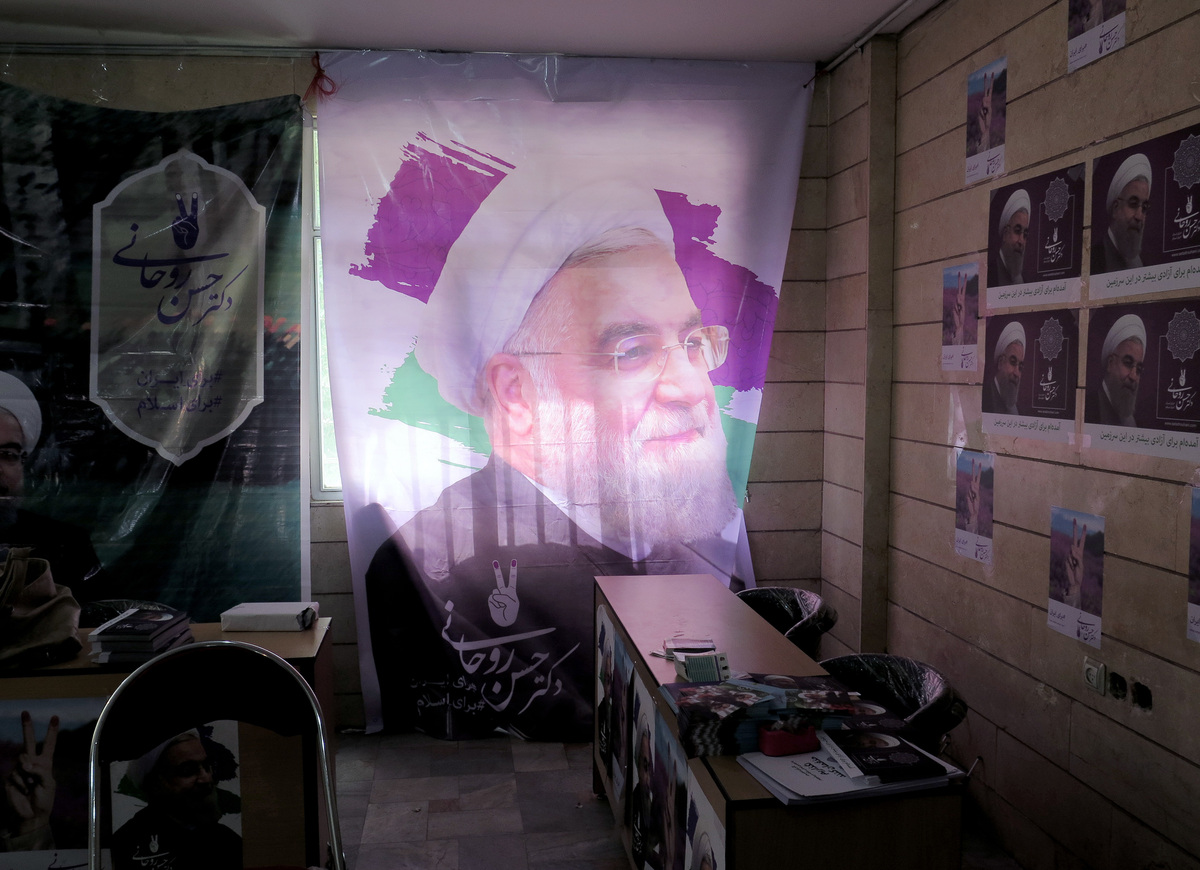 A portrait of Iranian president Hassan Rouhani hangs in a campaign office in Tehran. Iranians vote today on whether to give another four years to the president who made a nuclear deal with the U.S.

Some writers and journalists feel more free. There is still no such thing as an American-style guarantee of a free press, but reform-minded newspapers, many of which were closed in recent years, have restarted. Journalists who were once jailed are out. We chatted with one of them, Maryam Majd, a photojournalist arrested for several weeks in 2011. She's now making a documentary film about an Iranian female film director.

There is also freer communication. Rouhani's government actively supported a dramatic expansion of 3G and 4G cellphone service across much of the country. The improved data service has altered daily life, according to Alireza Sadeghian, a CEO who oversees half a dozen Internet businesses.

"Once 3G comes, the culture changes," he says. "The fact that you have Internet on the street makes you much more addicted to your phone, makes you download much apps, use much more apps, makes you use technology much more ... I don't like it!" Sadeghian added with a laugh — even though it's good for business. It's also, by the way, good for the Internet political conversation — much of which tends to favor Rouhani and reform, and finds its way online even though some social media platforms are blocked.

A more tangible result of this tech upgrade is visible in Tehran kitchens, like that in the apartment of Maral Mohamedzadeh. She's a housewife who cooks two dozen lunches per day — and sells them to customers via the Internet. She's part of a business called Mamanpaz, which works with dozens of housewives to deliver actual home-cooked meals to businesses. People place orders online; the cooks are connected to them through a mobile phone app. The business is the creation of Tabassom Latifi, who's 31, and started the business early in Rouhani's term. 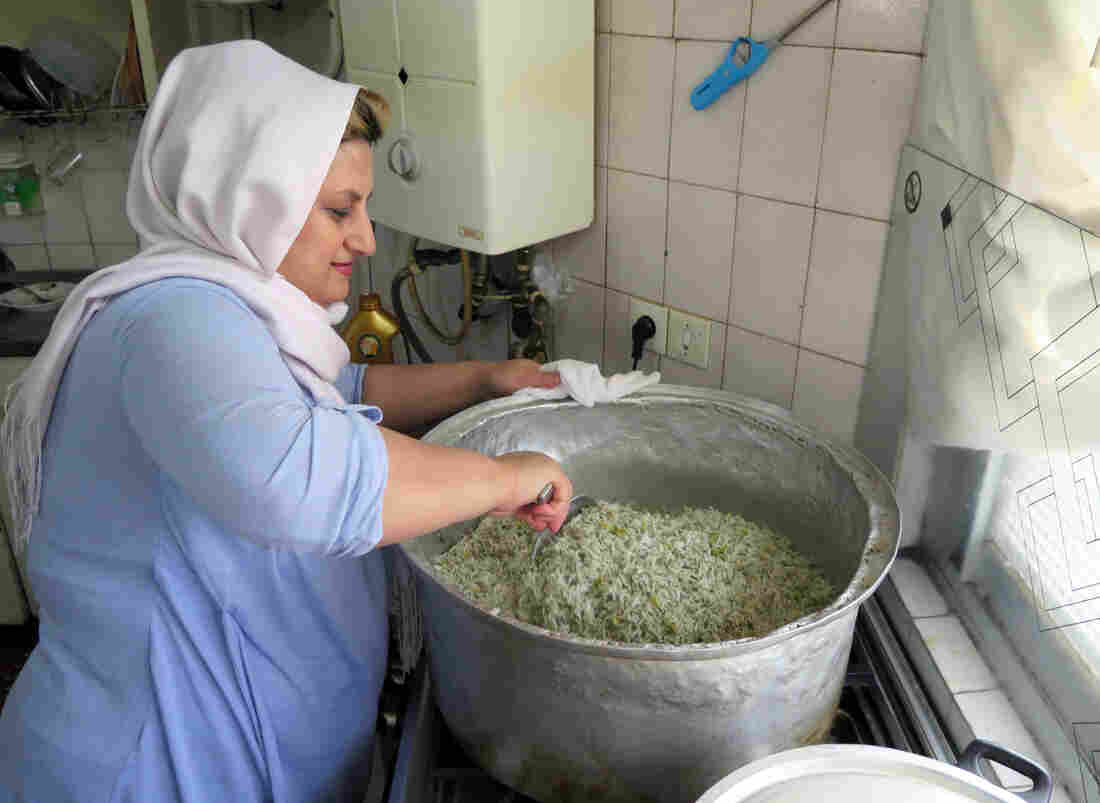 Maral Mohamedzadeh prepares food at her home for Mamanpaz, an organization that works with dozens of housewives to deliver home-cooked meals to businesses. Kevin Leahy/NPR hide caption

And then there's Kourosh Qadiri, who works for another Internet business: He's a driver with an Iranian equivalent of ride-hailing services like Uber. In Tehran one such business is called Snapp, and Qadiri, a college student, makes extra money driving. Indirectly, then, he benefits from Rouhani's tech-friendly government, although he told us he is not a fan of the president: He opposes Rouhani's nuclear deal.

The more things stay the same

There is also a lot that did not change in Rouhani's first term, as we heard when we left Tehran for the much smaller city of Qazvin.

Ringed by factories, it's both an industrial town and a historic site, home of a 1,200-year-old mosque that had once been a Zoroastrian temple. It's also home of a centuries-old caravanserai, a kind of hotel and stable where camel caravans would stop to rest centuries ago.

At Persepolis, Iran's Grand Past Overshadows Its Frustrating Present

Today the caravanserai has become a kind of upscale bazaar. In its arched brick passageways, we met Ashran, a 20-year-old college student who was deeply cynical about Iran's government, which he felt was just out to control him. A nearby shopkeeper summed up his own skepticism: "The people live for themselves, and the government lives for itself."

Yet he hasn't brought down unemployment. The rough economy was evident in a Qazvin real estate office, where the brokers told us that a few years ago they were selling 15 or 20 houses per month, but now just two or three. In fairness, this may also be a sign of progress: A few years ago, Iranians were desperately putting their money into real estate, hoping to jump before inflation made their money worthless.

Now President Rouhani has brought down inflation, but he slowed the economy while doing so. His record is mixed enough that his critics had no trouble bringing out a crowd for a rally in a Qazvin suburb on Wednesday, the last official night of campaigning. 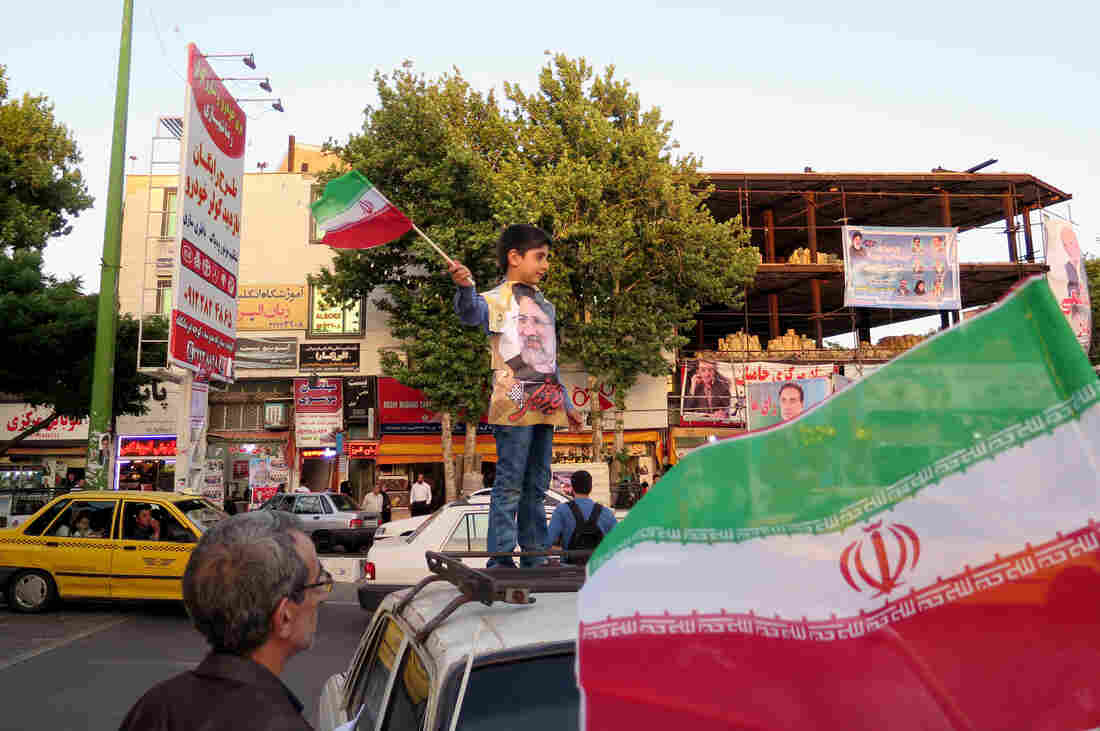 A boy waves an Iranian flag at a rally in Qazvin on Wednesday for the conservative cleric Ebrahim Raisi, the presidential candidate pictured on the boy's shirt. Kevin Leahy/NPR hide caption 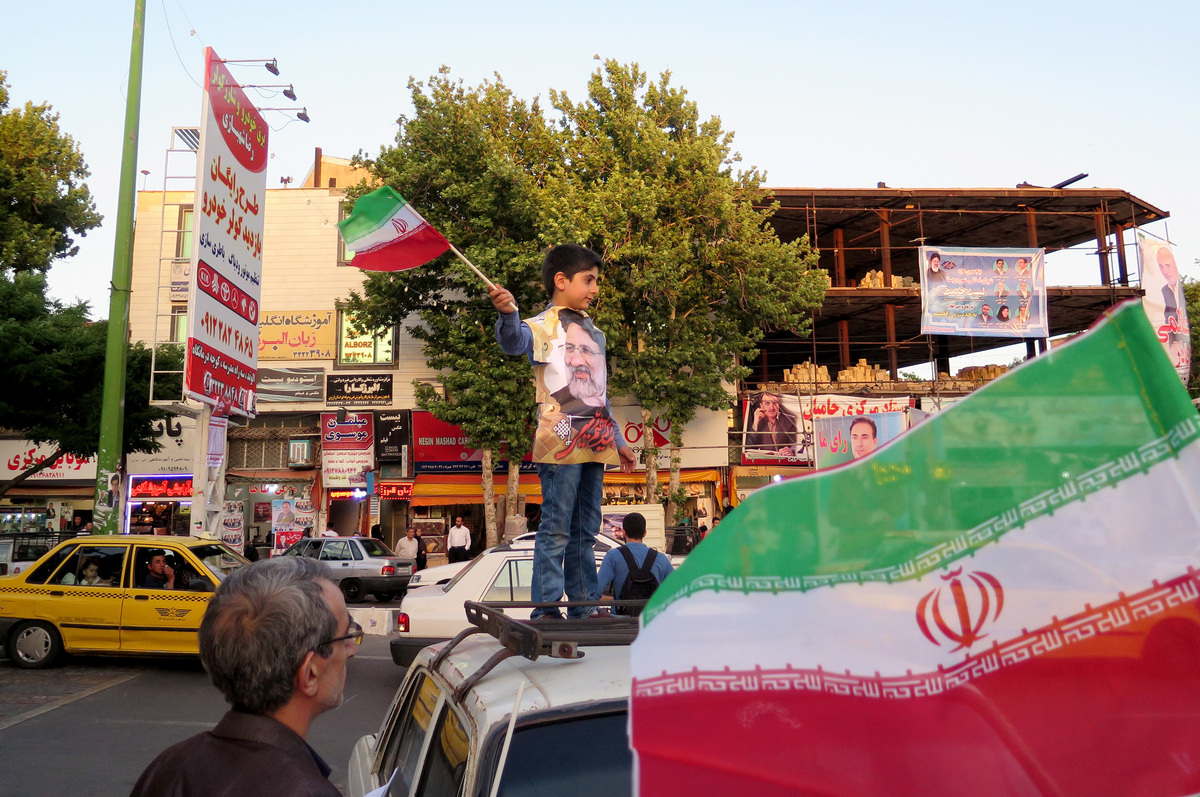 A boy waves an Iranian flag at a rally in Qazvin on Wednesday for the conservative cleric Ebrahim Raisi, the presidential candidate pictured on the boy's shirt.

Some at the rally feared Rouhani has changed too much. One was Mehdi Mohammad Khani, a clerical student, who wants to reinforce the rule of Iran's supreme leader. Nearby, a 17-year-old said he feared Rouhani would encourage boys and girls to have sex.

In reality, the moral and social codes of the Islamic Republic remain essentially as they were. Not only do some women chafe at the requirement that they cover their hair — many hope for equal treatment in the workplace, and changes to divorce laws that currently favor men. In Tehran, we met Maryam Abdi and Sagedeh Kianooshrad. They were working in a campaign office supporting Rouhani even though he has not delivered on their issues. They feel he is their best hope.

In the end, four years of drama came down to a single choice for millions of Iranians: either stay the course with Rouhani, or try a new direction with a more conservative challenger, Ebrahim Raisi. On Friday, they marked their paper ballots and dropped them in plastic boxes. They will choose the leader who will face President Trump's administration as it works to pressure Iran — and that same leader will face pressure from both sides of Iran's cultural divide at home.