Accessibility links
Defectors Reflect On Life In North Korea : Parallels Now in Seoul, North Korean defectors recall life inside one of the world's most secretive regimes, talking of brainwashing, required military service — and the jolt of seeing the outside world. 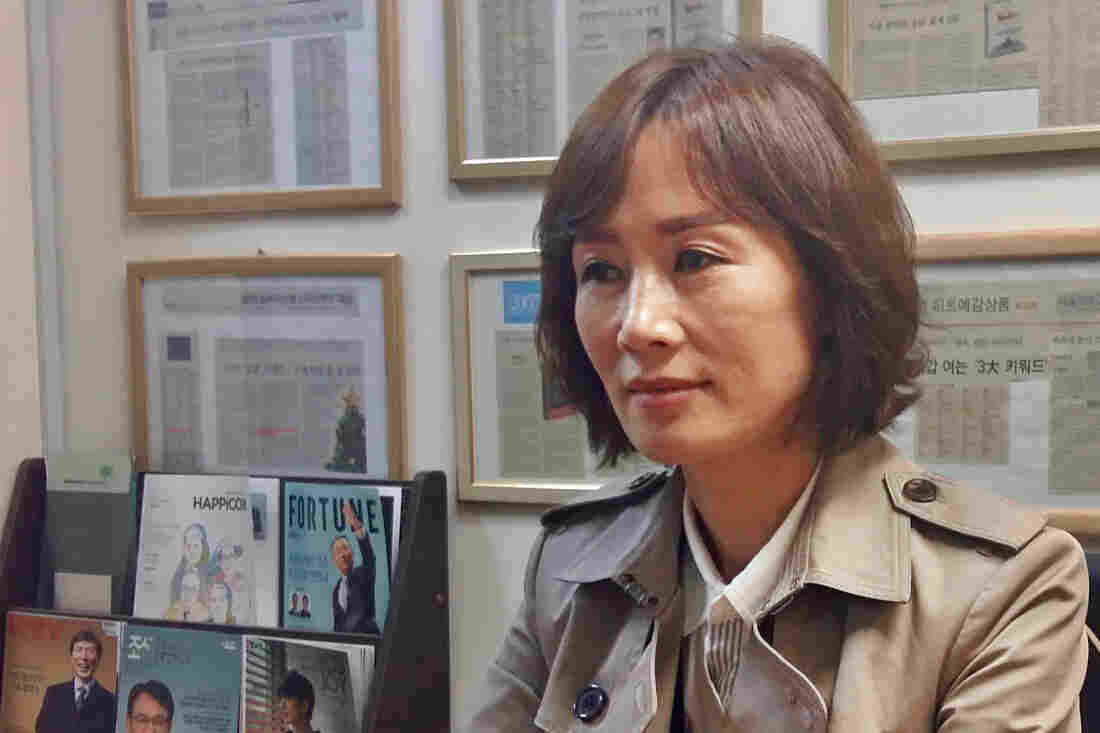 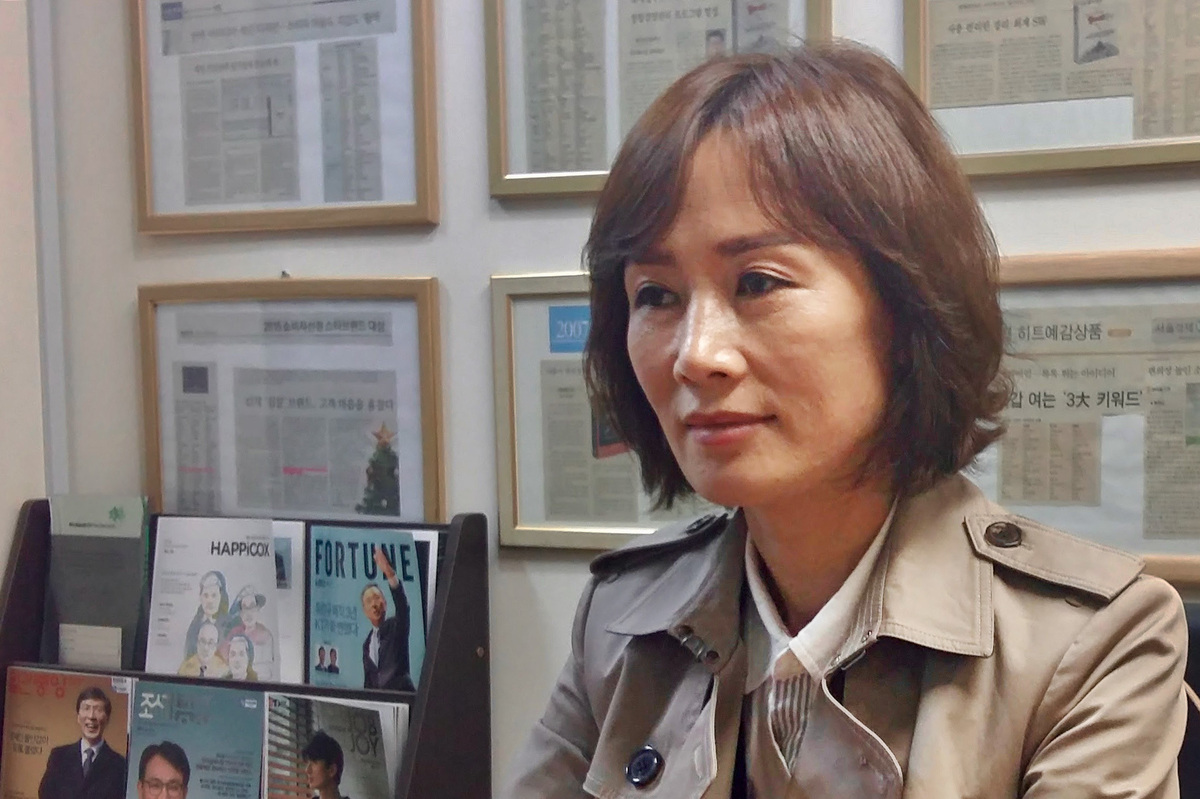 Lee So-yeon, a North Korean defector, used to be a signal corpsman in North Korea's army.

Watching footage of April's military parades in North Korea — with soldiers marching in formation to patriotic tunes — Lee So-yeon recalls all the steps. She was once one of those soldiers.

The daughter of a university professor, Lee, now 41, grew up in North Korea's North Hamgyong province. But when famine devastated the country in the 1990s, women — including Lee — volunteered for the military in droves, often for the food rations.

Since 2014, North Korean women have been drafted for seven years of mandatory military service. Men serve 10 to 12 years. For each gender, those are the longest conscription terms in the world.

Lee joined the North Korean army in 1992 and served nearly 10 years, mostly in a desk job with the signal corps. But on holidays, she had to march.

"All of us soldiers had to march," she recalls in an interview inside a glass-and-steel skyscraper in South Korea's capital, Seoul. "It unified us, and showed off our strength to the outside world."

In the military, Lee says, she witnessed sexual abuse and violence against female soldiers. She tried to defect but was imprisoned and tortured. Finally, in 2008, she managed to sneak across the Tumen River to China.

"I was shocked by freedom — that I didn't need permission to do anything!" Lee recalls. "I couldn't believe there was hot water, hair dryers! I could vote for whomever I wanted. And all the food!"

Lee has since become an advocate for female defectors as head of the New Korea Women's Union, based in western Seoul. But from her time in the military, she is able to offer insight into what the North Korean government wants its own people to know — and what it's like to be inside one of the most secretive regimes in the world at times of heightened tension with the West.

When she was a soldier, state TV blasted nonstop in her office, she says.

"There's a TV in every army barracks. When there was a nuclear test, state TV told us to feel proud, so we did," Lee says. "Even when there were peace talks between North and South Korea, state TV told us it was a ploy by the South to take over our country."

The media in North Korea do not merely report information. Instead, they're a tool for the regime to stir emotion, especially when it feels threatened — as it does now, says Jeon Young-sun, a professor of North Korea studies in Seoul. 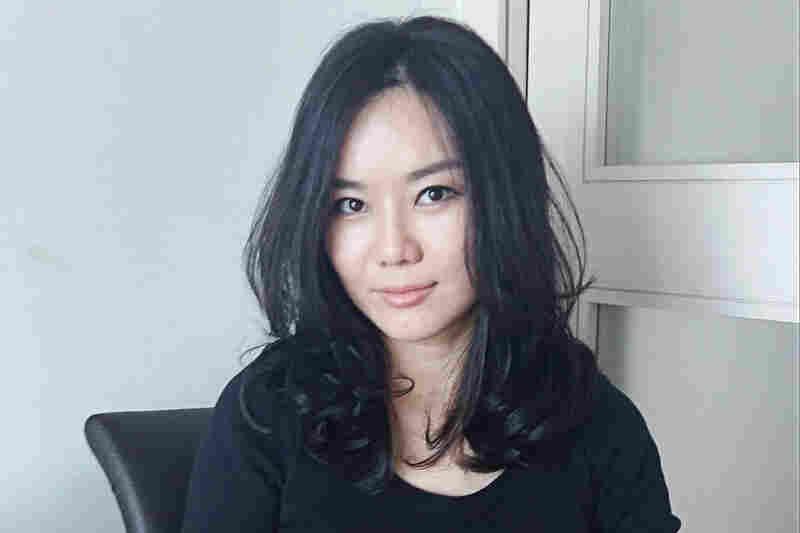 Lee Hyeonseo, who defected from North Korea, is the author of a memoir, The Girl With Seven Names, about her escape. Lauren Frayer/NPR hide caption 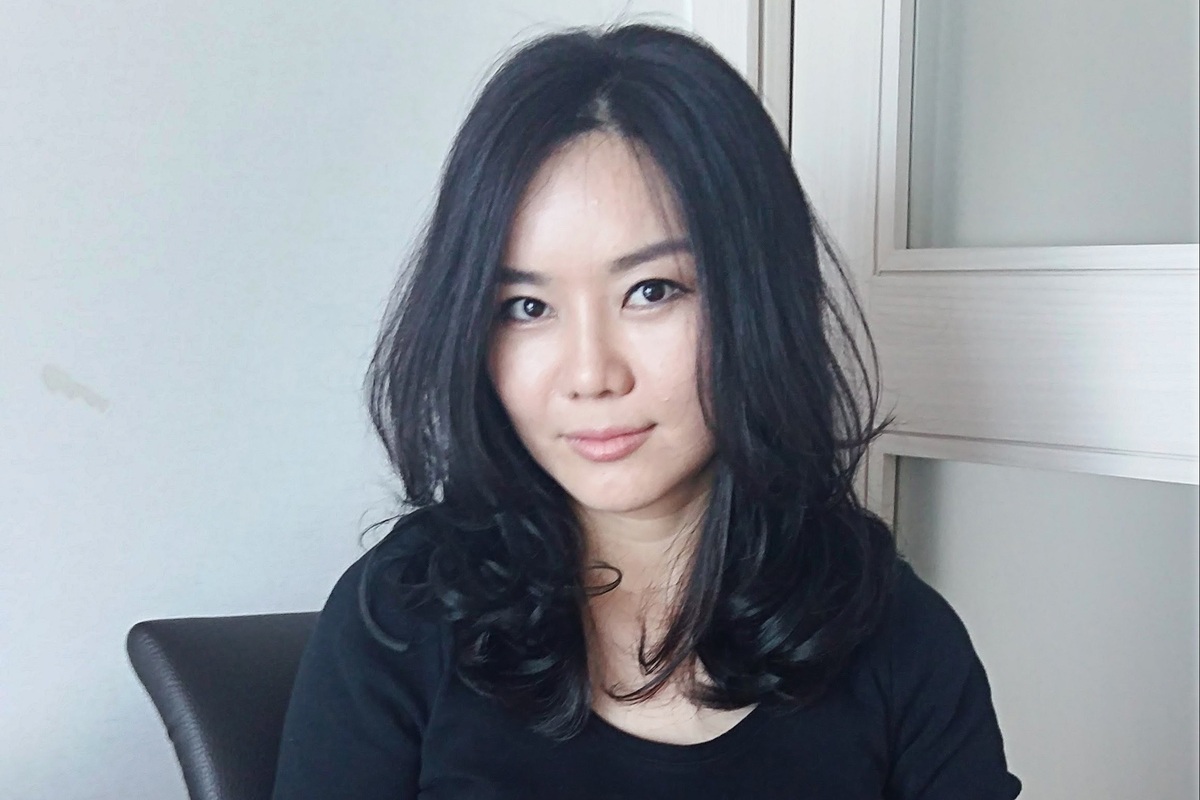 Lee Hyeonseo, who defected from North Korea, is the author of a memoir, The Girl With Seven Names, about her escape.

"Outside pressure on North Korea — sanctions or threats of attack — actually help the regime win domestic support," Jeon says. "North Korea is as always on the defensive, and fear rallies people around their Dear Leader."

It's not just soldiers. Defector Lee Hyeonseo was a high school student in 1994, when the Clinton administration came close to a pre-emptive military strike on North Korea's nuclear facilities. Her school ended classes and sent the students out digging trenches for months.

"We were so scared at the time. We really thought we were going to have a war," says Lee, 36. (She is not related to Lee So-yeon, with whom she shares a surname.) "And then, we were proud. Somehow, we believed we were going to win that war, because our dear leaders Kim Il Sung and Kim Jong Il, they were superior gods who can make everything happen."

Lee wrote a 2015 memoir of her escape from North Korea, The Girl With Seven Names, about how she used fake identities to escape across China and, finally, years later, to Seoul. She also helped bring her mother and brother to safety in Seoul.

The family still talks occasionally to relatives inside North Korea, who live close enough to China to pick up a Chinese cellphone network. But authorities are cracking down, Lee says. She recently spoke with her aunt, asking what it feels like inside North Korea now, after President Trump warned of "major, major conflict" with Pyongyang. But they're unable to talk on the phone in confidence and can't speak for very long. Lee couldn't get a real answer from her aunt.

"It's really, really difficult right now. After only one minute, the GPS reveals [to North Korean authorities] where the phone call is taking place," Lee explains. "People are super scared."

Many defectors, having been exposed to North Korean propaganda for so long, cannot leave it behind.

At one point during NPR's interview with Lee So-yeon, the former North Korean soldier, she began to sing — an old army song, about becoming a bullet for the Dear Leader.

Lee laughs and says she realizes how strange it is to sing a North Korean propaganda song in Seoul, the capital of what the song's lyrics call a "puppet regime."

"But I was brainwashed," she says. "And that's what's scary."