Accessibility links
Trump And Tillerson Appear To Contradict Each Other On Qatar : Parallels While Secretary of State Rex Tillerson attempted to heal a deep rift among Arab partners with a carefully crafted statement, Trump called out Qatar for its "very high level" of terror financing.

Secretary of State Rex Tillerson speaks in the Treaty Room of the U.S. Department of State on Friday, urging Saudi Arabia and its regional allies to ease their blockade of Qatar. Paul J. Richards/AFP/Getty Images hide caption

Secretary of State Rex Tillerson speaks in the Treaty Room of the U.S. Department of State on Friday, urging Saudi Arabia and its regional allies to ease their blockade of Qatar.

As Secretary of State Rex Tillerson tries to heal a deep rift among Arab partners, President Trump seems to be upping the ante. Trump says he consulted with Saudi Arabia and others on a recent trip to Riyadh and decided to call out Qatar for its "very high level" of terror financing.

Since then, Saudi Arabia, United Arab Emirates, Egypt, Bahrain and Egypt have severed diplomatic ties and transport links with Qatar. Tillerson told reporters at the State Department shortly before Trump spoke that this blockade is hindering the U.S.-led military campaign against ISIS, creating hardships for the people of Qatar and "impairing U.S. and other international business activities in the region."

Trump had asked Tillerson to help mediate the crisis, and the secretary has been calling his counterparts in the region to "de-escalate" the situation and resolve their grievances. Tillerson's carefully crafted statement urges the emir of Qatar to do more to stem terrorist financing but adds that "others must also continue to eliminate factions of support for violent organizations within their own borders." He also pointedly asked Saudi Arabia and others to ease their blockade on Qatar. 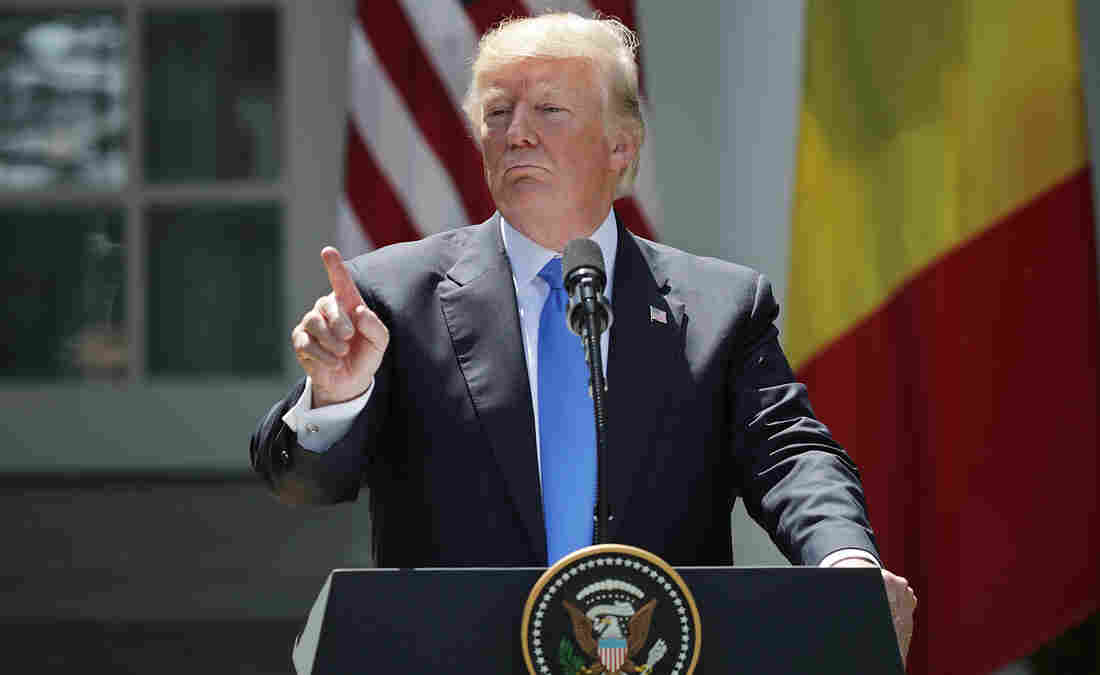 Tillerson then went to the White House, where Trump seemed to contradict him, putting the focus squarely back on Qatar. At a joint news conference with his Romanian counterpart, Trump described his recent visit to Riyadh, where "nations came together and spoke to me about confronting Qatar over its behavior. So we had a decision to make. Do we take the easy road or do we finally take hard but necessary action?" he said, adding he decided "the time had come to call on Qatar to end its funding."

Qatar is the regional headquarters for U.S. Central Command and home to some 10,000 American troops, NPR's Scott Horsley has reported.

"While current operations from Al Udeid Air Base have not been hindered or curtailed, the evolving situation is hindering our ability to plan for longer-term military operations," said Capt. Jeff Davis, a Pentagon spokesman, according to The New York Times.

Asked for comment after the president's remarks, a State Department spokesman offered a chart comparing parts of the two speeches that appeared to track, but he did not directly answer whether the speeches were coordinated.

A senator on the Foreign Relations Committee, Chris Murphy, D-Conn., noticed the contradiction between Trump's and Tillerson's remarks, writing on Twitter that this is not how foreign policy is supposed to work. "This is bananas," Murphy wrote.

This is bananas. At presser Trump reaffirms U.S. support for Qatar blockade - despite Tillerson's statement of opposition 90 MINUTES AGO. https://t.co/PwGFl6M9Ai