Accessibility links
Qatar's Crisis With Saudi Arabia And Gulf Neighbors Has Decades-Long Roots : Parallels It's the most recent flare-up in a series of long-running tensions between Qatar and Saudi Arabia and the Gulf states. This time, analysts say, there will be no easy or quick resolution. 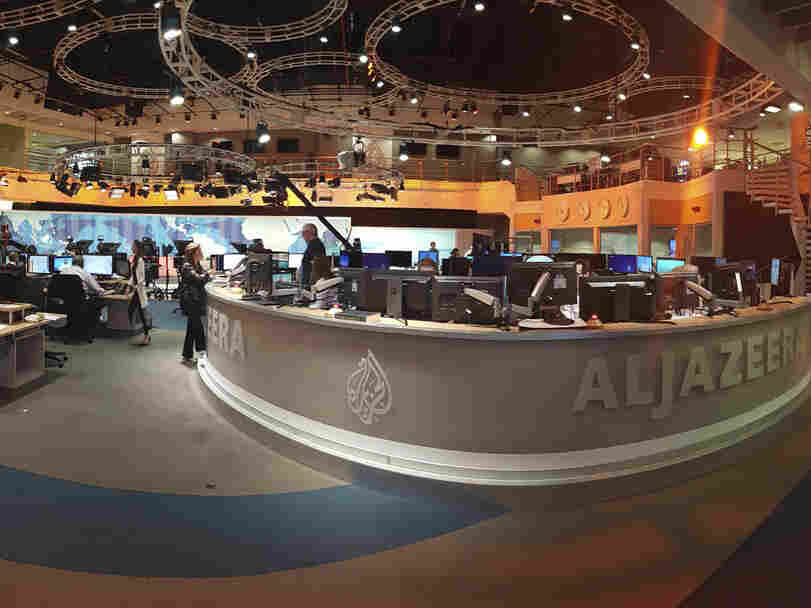 Coverage by the Arabic-language satellite channel Al-Jazeera has long been a sticking point in Qatar's relations with its neighbors. Saudi Arabia and others are pressuring the country to shut down the channel. Malak Harb/AP hide caption 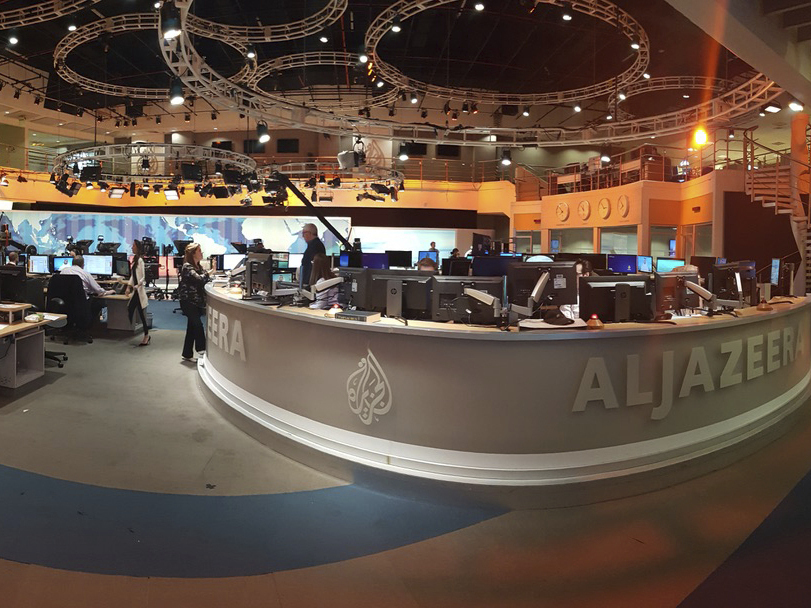 Coverage by the Arabic-language satellite channel Al-Jazeera has long been a sticking point in Qatar's relations with its neighbors. Saudi Arabia and others are pressuring the country to shut down the channel.

The decision last week by Gulf Arab states to sever ties and halt trade with the tiny, hydrocarbon-rich country of Qatar has focused attention on what critics call Qatar's funding of Islamist groups, including the Muslim Brotherhood and Hamas.

U.S. investigators believe the crisis was sparked by hackers who transmitted fake, inflammatory messages appearing to come from Qatar's emir.

But the dispute is unfolding against a backdrop of long-standing irritation with Qatar among its larger Sunni Arab neighbors in the Persian Gulf.

Saudi Arabia (which has also been accused of supporting terrorist groups), the United Arab Emirates and others have frequently complained about Qatar's state-backed media outlet Al-Jazeera and its equable working relationship with Saudi Arabia's main rival, Shiite power Iran.

To some, the current crisis is a simple tale of cracking down on one source of terror financing. To others, it's the latest effort to rein in a small country with a history of going its own way.

Tensions that date back decades

Long before it was an oil and gas power, Qatar was controlled by outsiders. In the late 19th century, the Ottoman Turks held sway. For much of the 20th century, until it gained independence in 1971, Qatar was a British protectorate.

The oil and gas age — the tiny peninsula controls the third-largest gas reserves in the world — made Qatar into one of the richest nations on Earth per capita.

But Qatar's leaders, all from the ruling Al Thani family – Sheikh Tamim bin Hamad Al Thani is currently in charge — chafed against the dominating, conservative influence of the behemoth next door, Saudi Arabia. 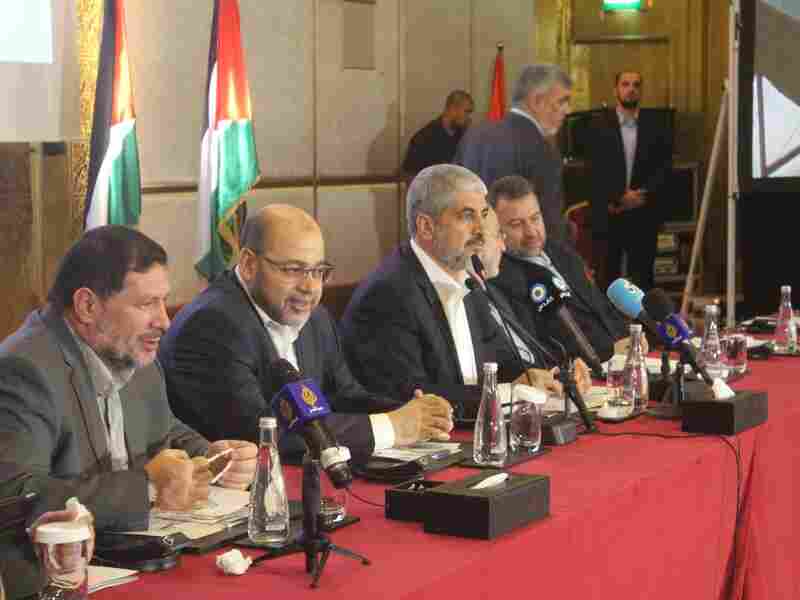 Hamas leader Khaled Mashaal (third from left) has been living in Qatar. The nation's ties to Hamas are among the Saudi and Gulf states' grievances. Anadolu Agency/Getty Images hide caption 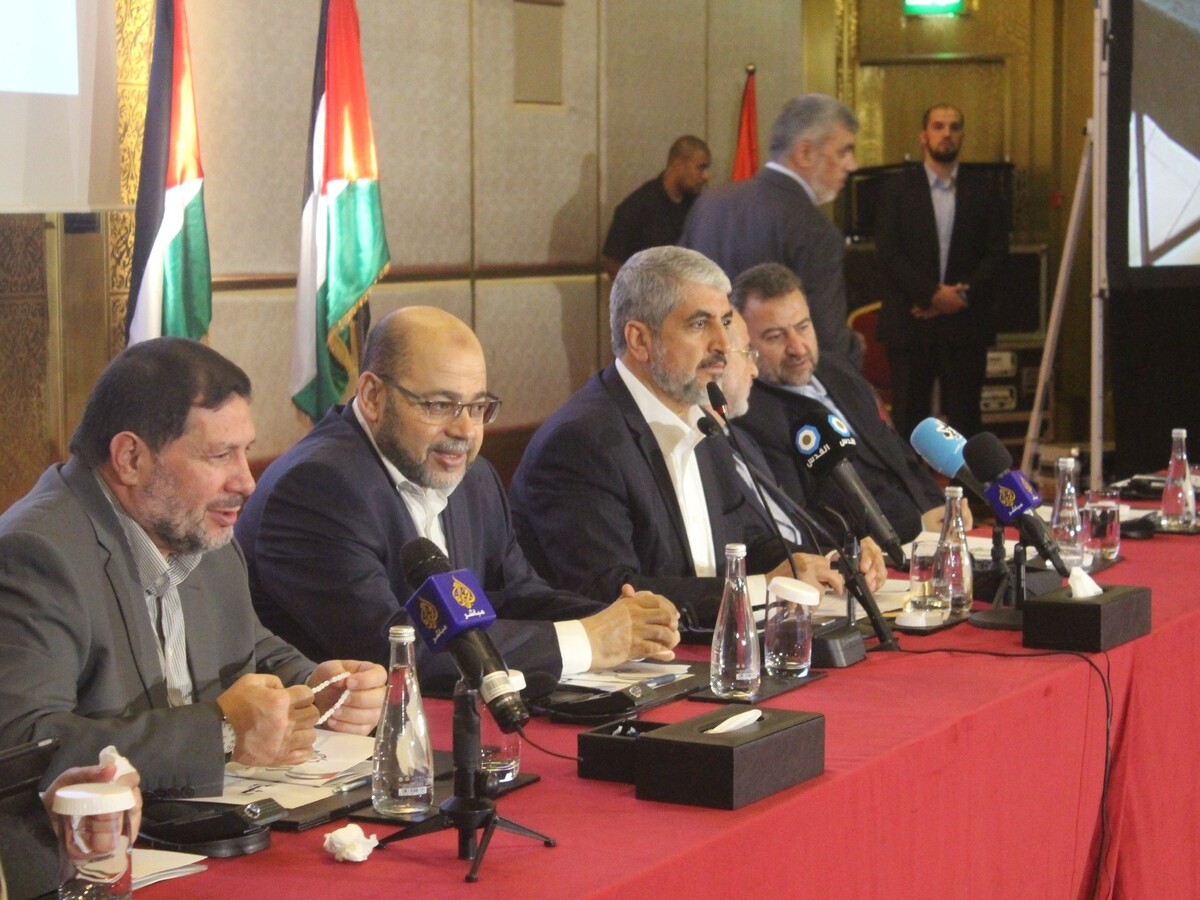 Hamas leader Khaled Mashaal (third from left) has been living in Qatar. The nation's ties to Hamas are among the Saudi and Gulf states' grievances.

The tensions date back decades, but here are a few highlights:

The Saudi ruling family loathed the Arab Spring uprisings as destabilizing to the region and possibly a threat to its own rule. It stepped up its own activism in the region, both on the ground and diplomatically.

In Libya and Syria, the Saudis and Qataris backed different fighting groups that were vying for influence. In 2014, Gulf states — led by Saudi Arabia — suspended diplomatic relations with Qatar for several months and threatened to do worse.

Now, after a visit last month by President Trump to Riyadh, the Saudi Arabian capital, they have done worse. They are demanding far greater concessions from Qatar than they ever did in the past — such as closing Al-Jazeera and expelling Hamas leaders — in return for restoring ties.

"This is far more dramatic than the diplomatic row that occurred in 2014," says Mehran Kamrava, head of the Center for International and Regional Studies at Georgetown University's outpost in the Qatari capital, Doha.

This time, the Saudis have closed Qatar's only land border, through which around 40 percent of its imports enter the country, and Gulf states have stopped air and sea shipments to Qatar. (Saudi Arabia has denied that there is a blockade against Qatar.) 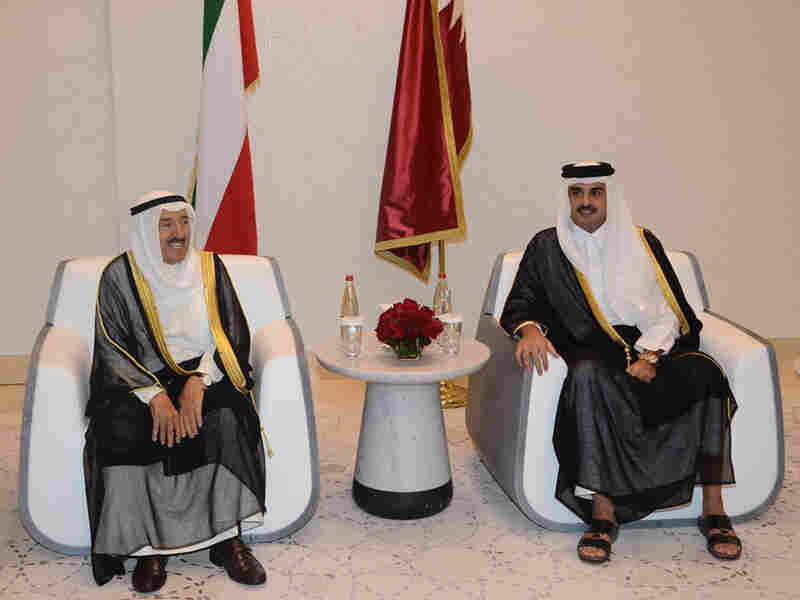 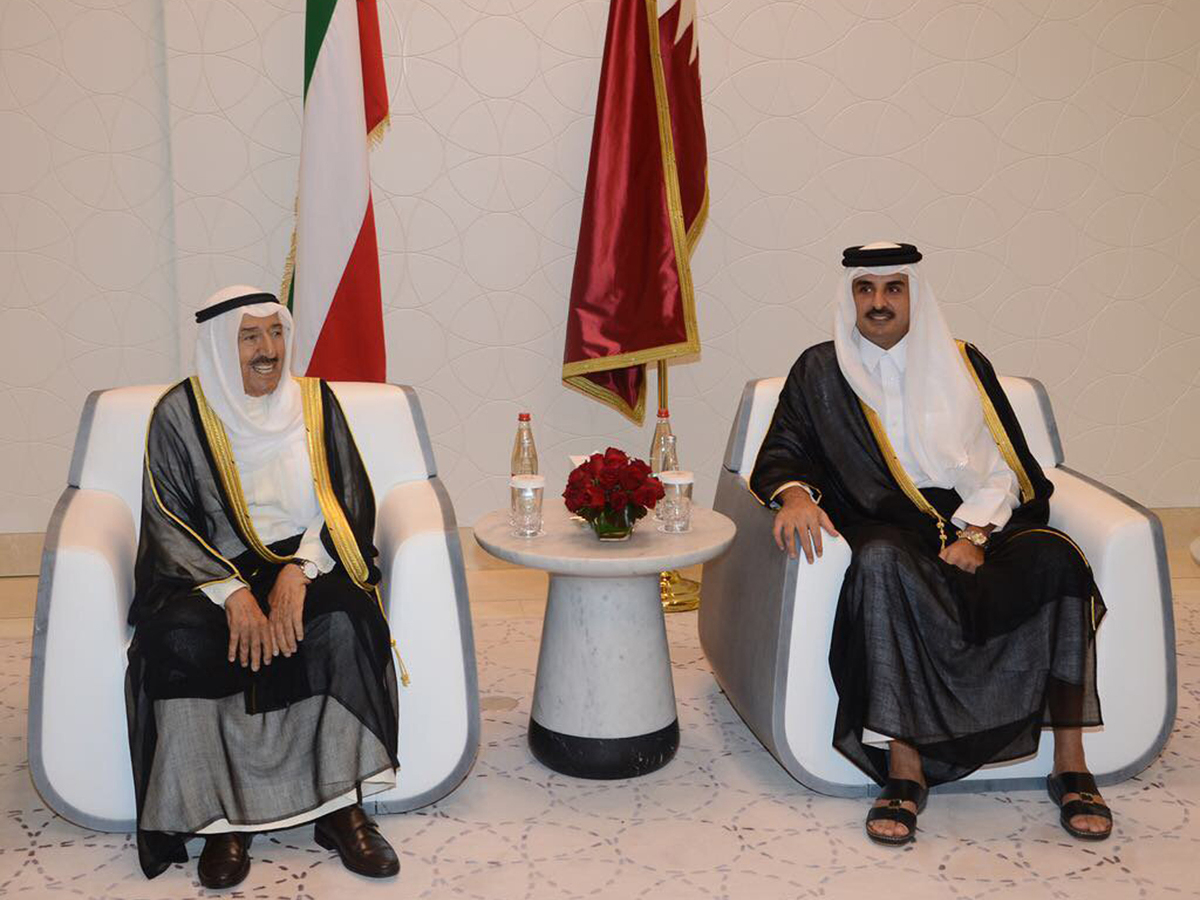 Kuwaiti Emir Sheikh Sabah Al Ahmad Al Jaber Al Sabah (left) met with Qatari Sheikh Tamim bin Hamad Al Thani in Doha, Qatar, earlier this month as the Kuwaiti leader tried to mediate an end to the regional crisis. But analysts warn there will be no quick or easy resolution.

Qataris in Saudi Arabia, the UAE and Bahrain have been given two weeks to leave, and citizens of those three countries were given the same June 18 deadline to leave Qatar.

Beyond that, says Kamrava, the dispute feels more visceral.

"This time, the disagreement appears much more personal," he says, adding that Qataris are "a bit shell-shocked" by the hostility.

Kuwait has tried to mediate. But Philip Gordon, a senior fellow at the Council on Foreign Relations, says the escalating tensions and tougher demands will make a diplomatic solution that much harder to reach.

"Some of what [Saudi Arabia and the Gulf states are] asking for ... expelling members of the Muslim Brotherhood and Hamas, and shutting down Al-Jazeera ... those are pretty big asks," he says — not to mention demands that Qatar cut ties with Iran.

But in the wake of Trump's visit to Riyadh — and his ensuing comments specifically targeting Qatar without mentioning complaints about Saudi Arabia's behavior in the region — the view among Gulf states is that they now have the leverage to force Qatar to be more cooperative.

Riad Kahwaji at the Dubai-based Institute for Near East and Gulf Military Analysis says the "gray zone" Qatar has been operating in — pledging allegiance to its Sunni Muslim neighbors in the Gulf Cooperation Council while continuing to support Islamist militants and cooperate with Iran — is disappearing.

He says it's time for Qatar to choose.

"If you are a true ally, and a member of the GCC," he says, "you cannot be supporting extremist groups, you cannot be in the same trench with Iran."

The crisis has forced Qatar to seek help — including from Iran. Iranian media are reporting that the country will send "humanitarian aid" shipments to Doha. Russia has also voiced support, and Turkey has stepped in to send food.

Turkish President Recep Tayyip Erdogan says a "very grave mistake is being made in Qatar" and has decried the isolation of the country as "inhumane and against Islamic values."

Some wonder whether all this pressure on Qatar might backfire, driving the country into an alliance with Russia, Turkey and Iran — one with very different objectives from the U.S.

But Sinan Ulgen, director of the Center for Economics and Foreign Policy Studies in Istanbul, says he doesn't see a Qatar-Russia-Iran-Turkey alliance being forged — at least, not yet.

"There certainly is a risk, now that Turkey has firmly sided with Qatar, that this would lead to increased tension" with Saudi Arabia, the UAE and Egypt, says Ulgen. But at the end of the day, Qatar "does not have the ability to withstand sustained pressure from its larger neighbors in the Gulf, especially if this strategy is indeed being backed by the U.S." 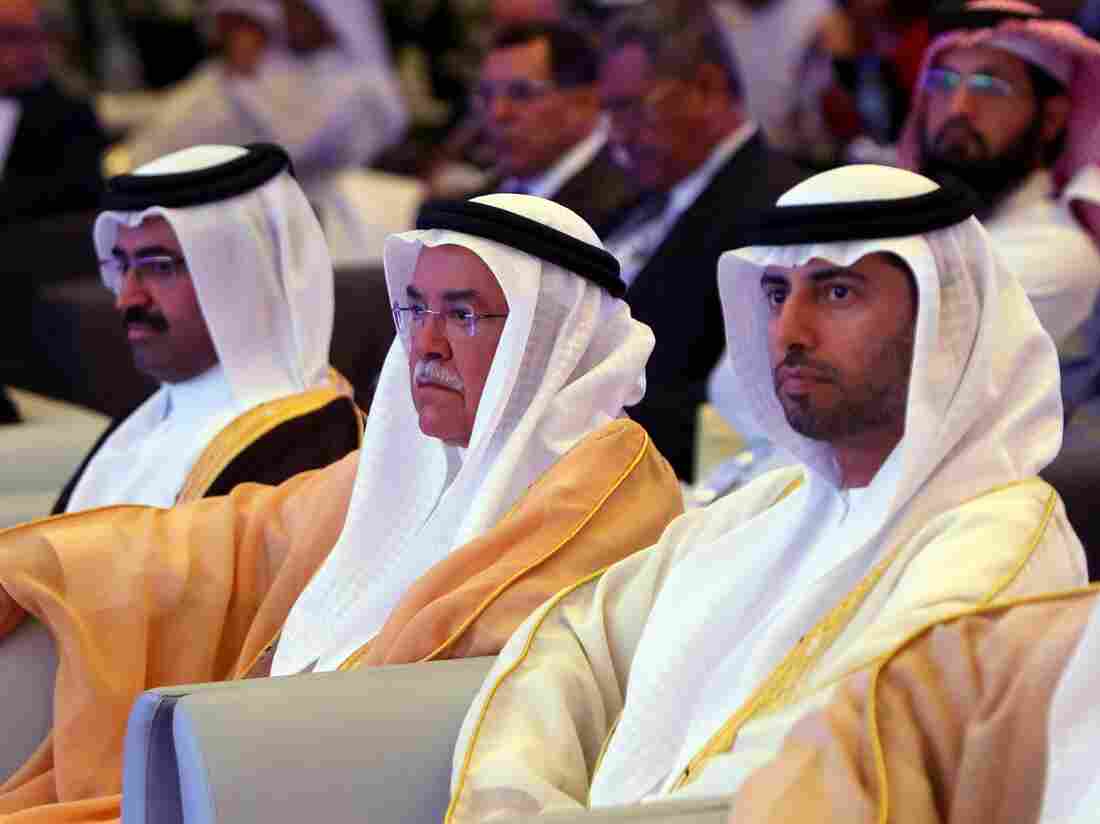 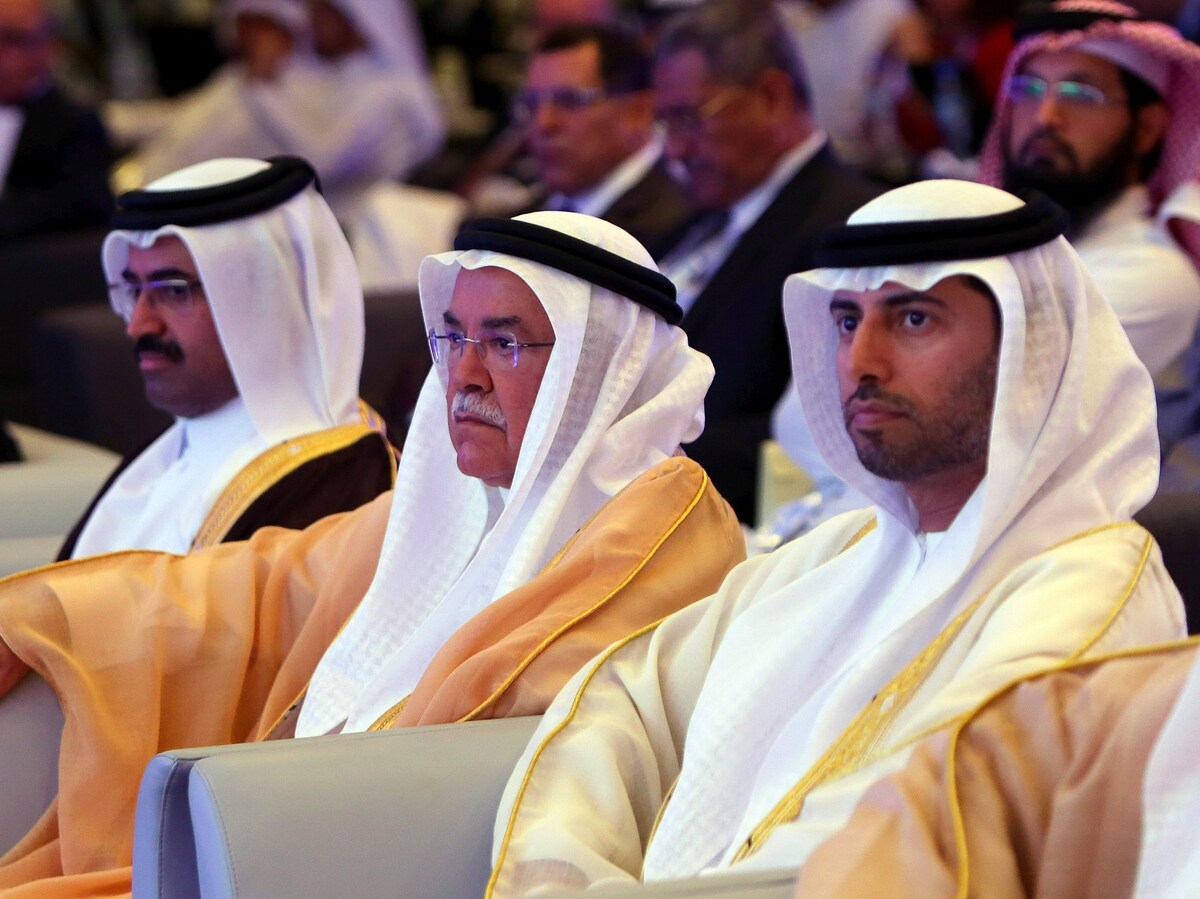 Thus far, Washington has sent mixed messages about the dispute, with Secretary of State Rex Tillerson calling for calm and dialogue, and President Trump saying it's time to put an end to Qatar's "very high level" of terror financing.

The Pentagon, meanwhile, maintains the U.S. Central Command's regional forward operating base in Qatar and has just signed a deal reportedly worth $12 billion to sell F-15 fighter jets to Doha.

Efforts to resolve the dispute appear to be still in the early stages, with a number of questions unanswered, says Mideast analyst Steven Cook at the Council on Foreign Relations.

"How sustainable is the Turkish relief effort? How far are the Iranians willing to go to exploit this problem on the other side of the Gulf?" he asks — and wonders, for that matter, how far Qatar will be willing to go to satisfy the Saudis.

"Can they really, truly expel members of the Muslim Brotherhood and Hamas, and will that be enough?" says Cook. "We're still in the, kind of, opening bids here, so I think this is going to go on. This is going to occupy us for the better part of the summer — and well beyond, actually."

A previous version of this story misspelled Mehran Kamrava's first name as Merhan.