Accessibility links
As ISIS Gets Squeezed In Syria And Iraq, It Aims To Motivate Fighters With Music : Parallels The Islamic State is losing territory in Iraq and Syria but is trying to keep its supporters' spirits up through song. Its newest release, "My State Remains," reveals an organization down but not out. 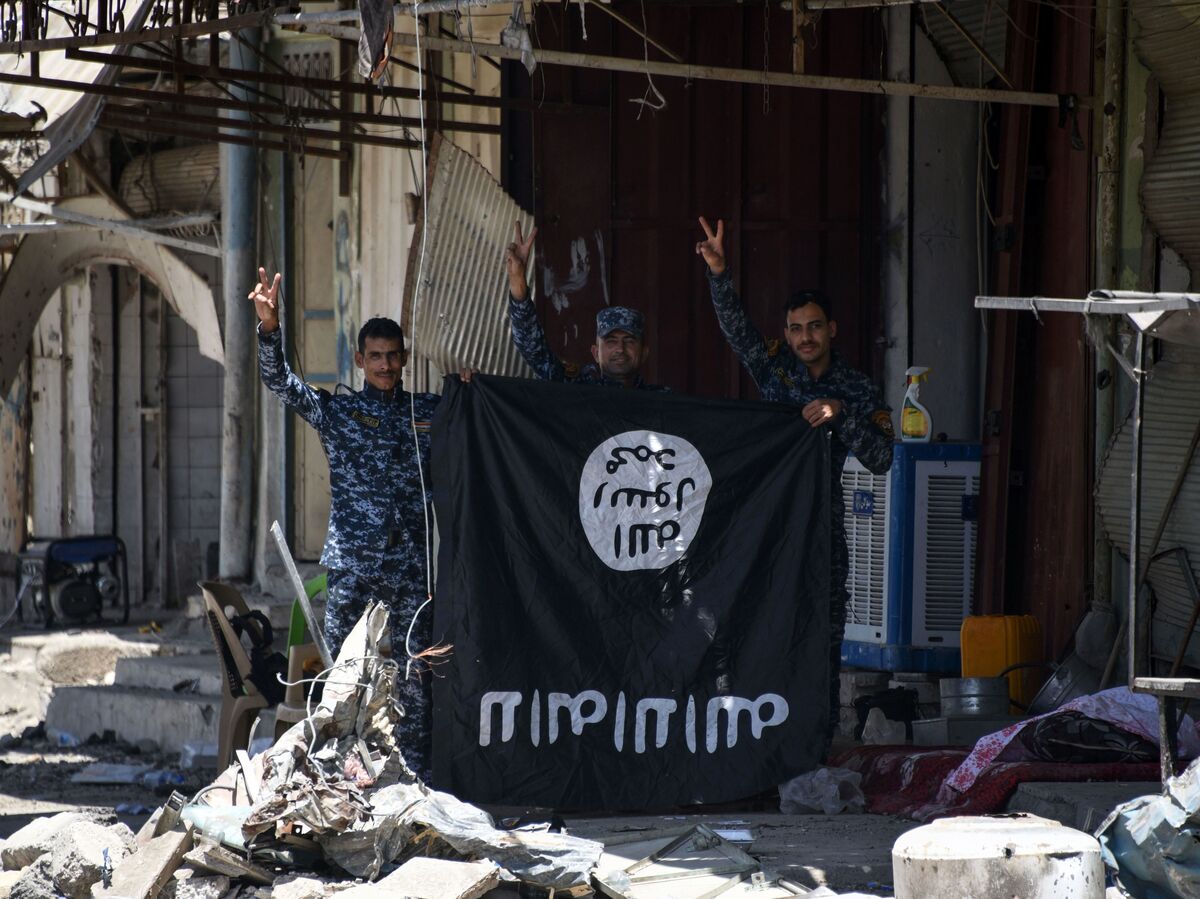 Three years ago, the Islamic State overran large swaths of Iraq and Syria, and soon declared a caliphate that straddled the border between the two countries. Today, the group's physical caliphate is declining — and the group is preparing its base of fighters for a future under siege.

One of the ways it is doing that is through its musical propaganda.

In the most austere interpretations of Islam, musical instruments are prohibited. But the a cappella hymn nasheed, in Arabic, is permissible. The Islamic State has used nasheeds to spread its message since its founding, disseminating battle hymns online through its own media unit and other affiliated propaganda outlets.

Most ISIS nasheeds are in Arabic, but the language of delivery can be as diverse as the foreign fighters who have joined its ranks.

The Islamic State's latest nasheed, released earlier this month, is titled "Dawlati Baqia" or "My State Is Remaining." Like other nasheeds circulated by ISIS, it sounds like it was professionally recorded and has an Auto Tune quality to it.

My state is remaining, firing at the enemy.
Its soldiers shout that it is remaining.
Its path will not be eliminated; its light seeks to expand.

Like other ISIS nasheeds, this one was disseminated across the Web, on encrypted messaging applications and likely on the group's radio station — still broadcasting in areas under its control. The verses are a defiant reply to those who believe ISIS' battlefield setbacks signal the group's demise.

Aymenn Jawad al-Tamimi , a research fellow at the Middle East Forum, has been tracking the Islamic State's full range of propaganda, including its music, since the group emerged. He says the nasheeds reflect the group's evolution from a battlefield force implementing its rule over an expanding territory and population to an embattled base now under intense pressure. 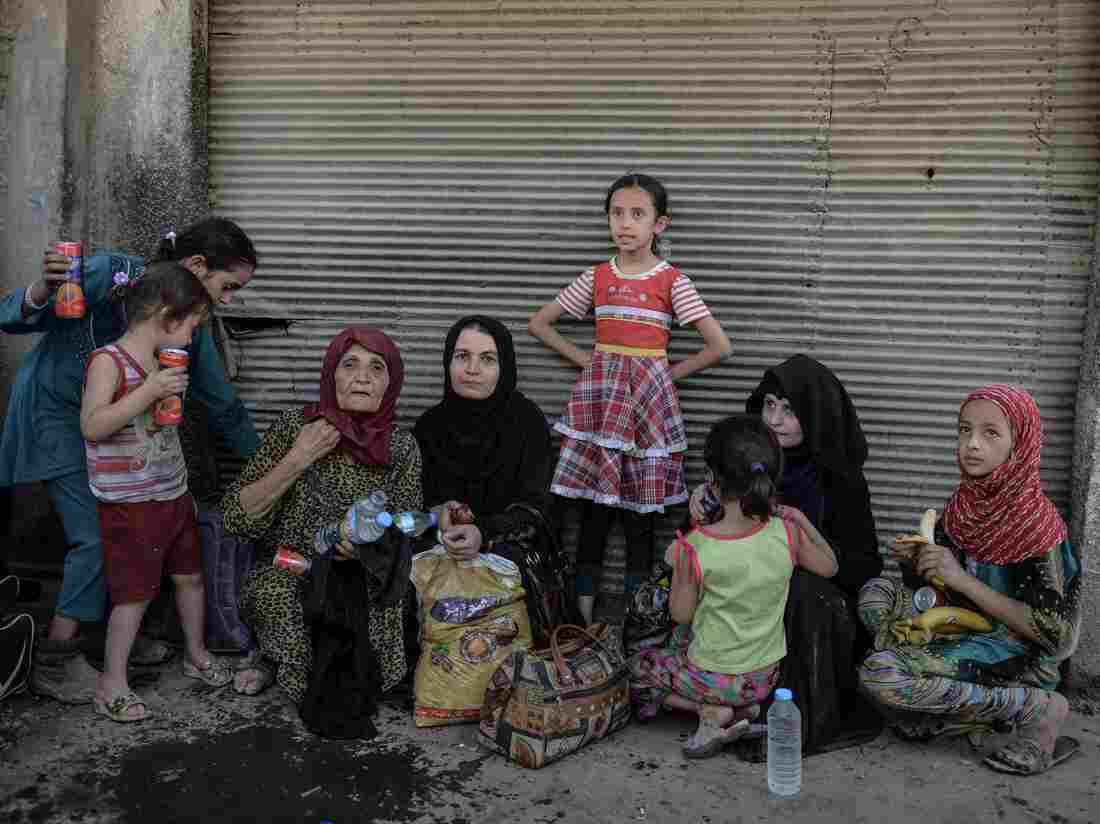 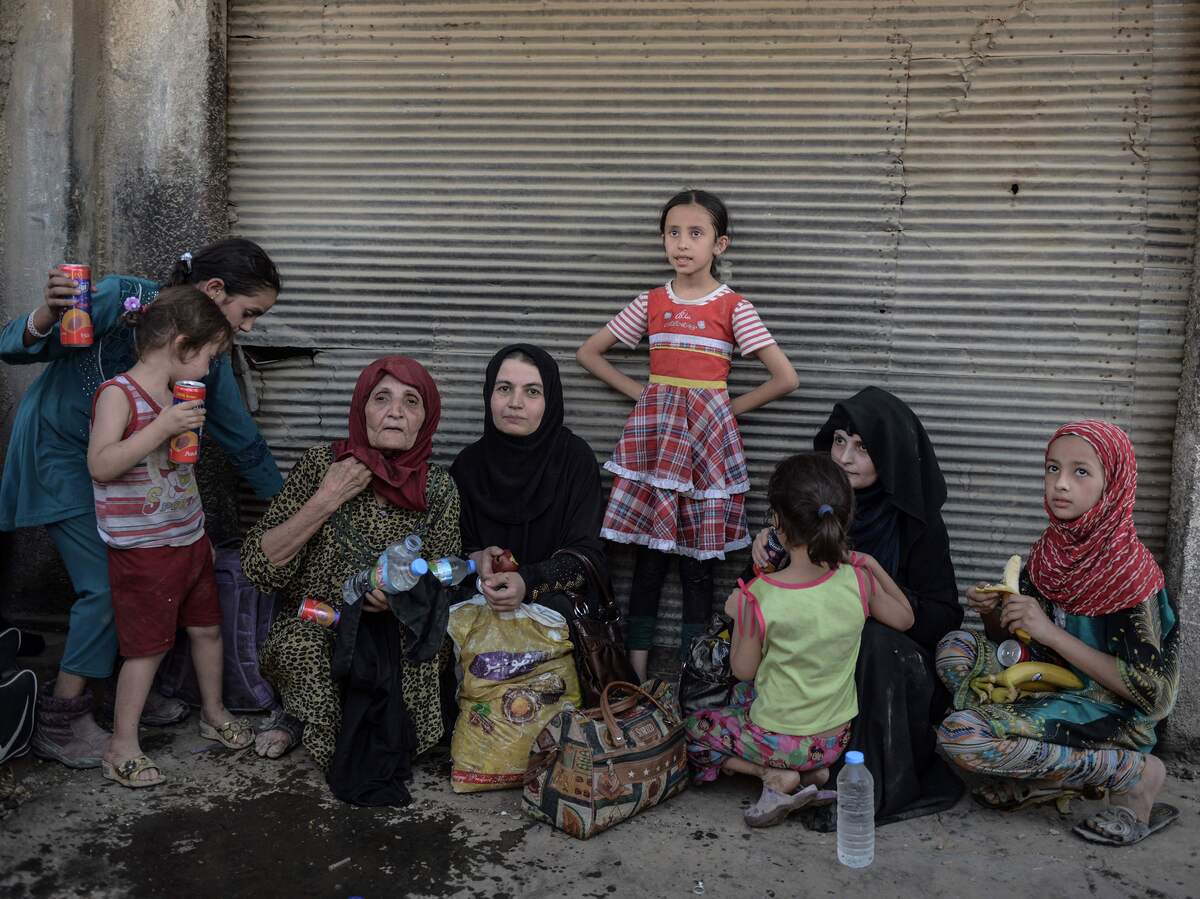 Iraqis fled the Old City of Mosul on June 23 after escaping the fighting between Iraqi forces and Islamic State jihadists.

The past few months have been a struggle for the group. The physical caliphate, which at its height drew adherents from as far afield as Europe and Chechnya, is dwindling. In Iraq, U.S.-backed Iraqi troops are closing in on the last ISIS-held enclave of Mosul, where Abu Bakr al-Baghdadi announced his caliphate three years before. And in Syria, ISIS is facing separate offensives from U.S.-backed Kurdish and Arab tribal forces as well as from Syrian pro-government forces, backed by Russia and Iran.

"My State Is Remaining" warns that the fight isn't over, though:

The Muslim nation has been awoken from its slumber.
Oh people of error! The state is remaining — not vanishing,
Anchored like the mountains, anchored, anchored.

The "people of error" may refer to Islamic State's battlefield enemies, including the U.S.-led coalition — or even those trapped under ISIS control, seeking to flee.

Between 2013 and 2015, Tamimi says, "You see [in the songs] the rise of the Islamic State, implementation of Islamic law and how it creates its realm of justice. But now what you see is the nasheeds are responding to the current situation faced by the Islamic State, which is the setbacks — territorial setbacks, potential loss of Raqqa and almost loss of Mosul."

In response to its losses of territory and people, ISIS released a nasheed in May titled "Heed the Call," referring to the call to jihad. The lyrics exhort the fighters "in the era of epic battles and conflict" to hold their ground in the face of death. "Where are the real men?" the song asks. "Where are the lions of the struggle?"

"The idea behind this messaging is two things," Tamimi says. "One is [a message that] we'll still remain, and the second one, encouraging people to keep up the fight."

Two years ago, when ISIS was still expanding geographically and attracting recruits to its nascent caliphate, the group was producing threatening battle hymns. They often served as the background music for its terrifying and bloody propaganda videos.

The nasheed "Soon, Soon" can be heard in the background of one of the most horrific ISIS execution videos — in which a captured Royal Jordanian air force pilot, Moath al-Kasasbeh, appears to be burned alive in a cage. "You'll see the battle come to your very home," the lyrics go. "To destroy you, my sword has been sharpened."

The nasheed was released within a day of the pilot's death, an emblem of the unapologetic brutality and defiance of ISIS at the height of its power.

But the murder did not stop the anti-ISIS coalition's bombing campaign. And in the years since, the physical caliphate has largely crumbled.

Tamimi says that as ISIS has lost territory and men, its nasheed production and variety also fell off. Foreign-language nasheeds — in Turkish or Uighur, for example — that were once churned out for ISIS' global following are becoming scarcer. Even the Arabic nasheeds directed at its base appear less and less often.

Tamimi says at first he thought perhaps the singers had been killed in airstrikes. But then ISIS released "Heed the Call" and "My State Remains" in May and June.

Despite the mournful tone of "My State Remains," the latest nasheed, the lyrics reveal a group keenly aware — and even proud — of the terror and upheaval it has unleashed, and the many lives it has destroyed. "Our state has made the tears of our enemies flow," the song says. "We have killed them by the thousands and led them to their deaths."