Accessibility links
Philippine President Duterte's First Year In Office Is Marked By Bloody War On Drugs : Parallels Some 7,000 alleged drug suspects have been killed so far in Rodrigo Duterte's drug war. And he's more popular than ever — except among the poor, where the drug war's effects are most keenly felt. 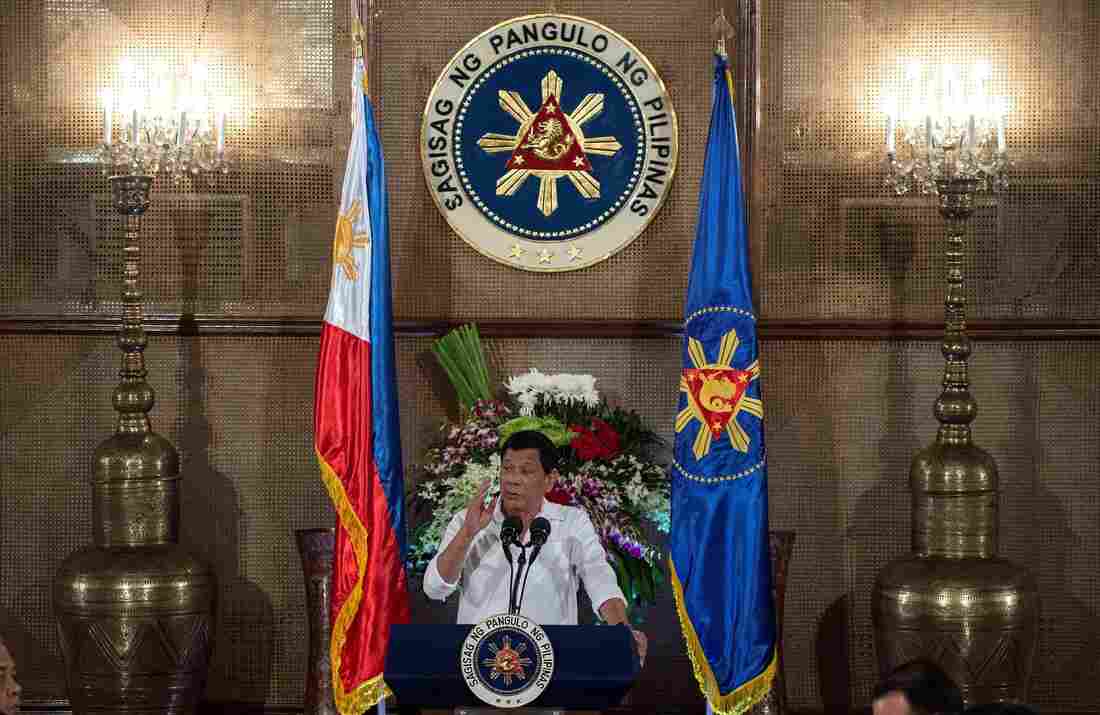 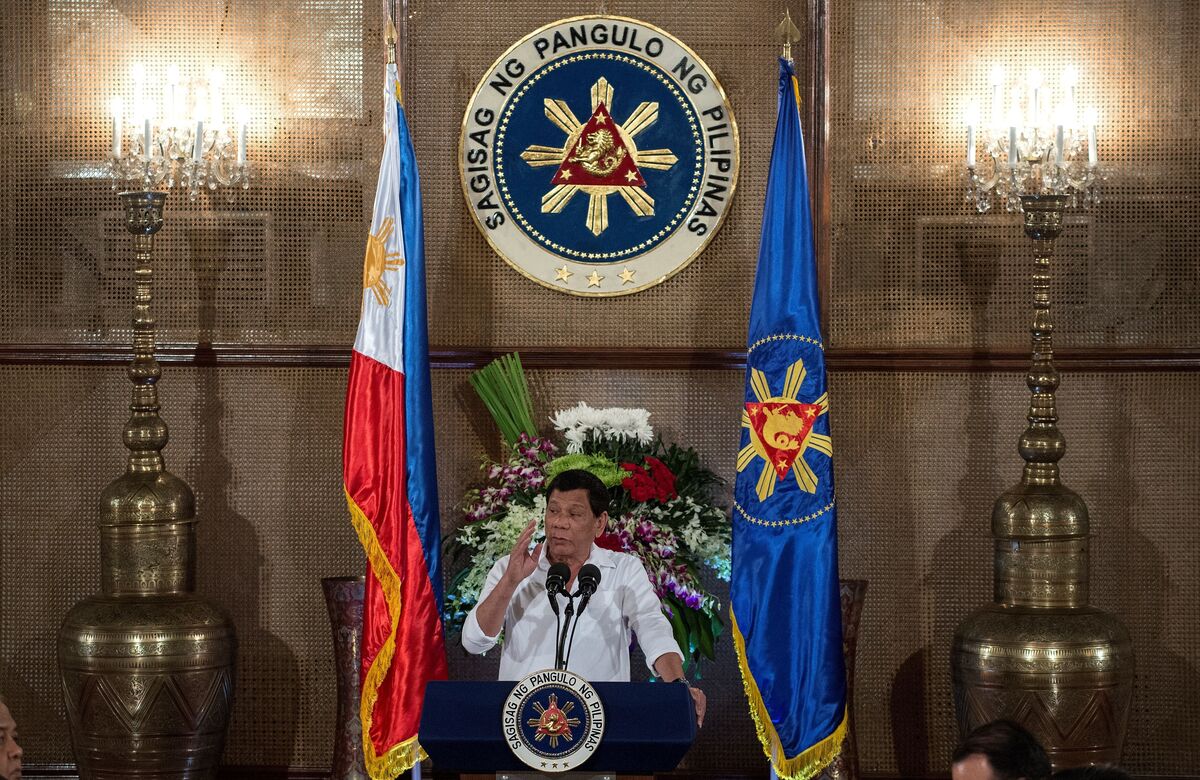 Philippine President Rodrigo Duterte gives a speech during Eid al-Fitr celebrations marking the end of Ramadan at the Malacanang Palace in Manila on June 27.

The president of the Philippines, Rodrigo Duterte, celebrates his first year in office Friday. Since becoming president, he has picked a fight with former President Obama, cursed out the Pope, joked about raping women and declared his "separation" from the United States to pursue a more independent foreign policy with new friends China and Russia.

But none of that really matters at home.

What does matter is that Duterte ran for president promising a brutal, bloody war on drugs. And he's delivered.

More than 7,000 alleged drug suspects have died in extrajudicial killings, in encounters with police or gunned down in so-called vigilante killings. The killings have drawn widespread international condemnation, with Human Rights Watch describing Duterte's first year in power as a "human rights calamity."

But here's the thing: Duterte is actually more popular now than when he was elected. 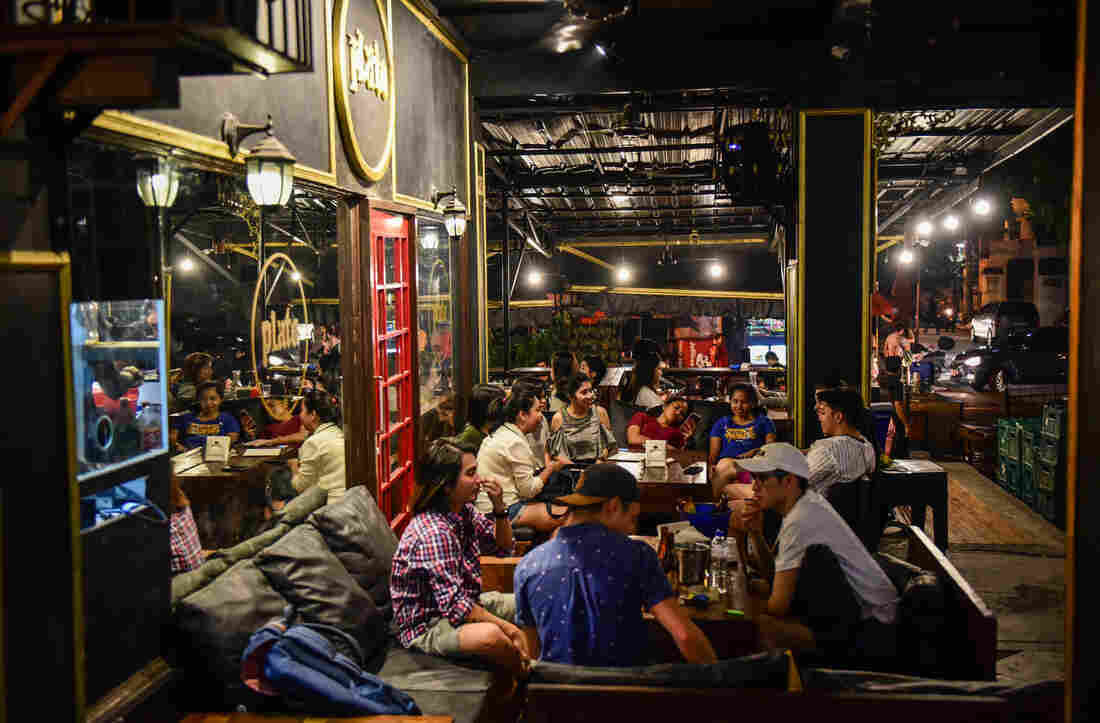 People gather in a bar popular with students from nearby De La Salle University. Alecs Ongcal for NPR hide caption

A year ago, he won the presidency with just under 40 percent of the vote. Today, according to the latest opinion polls, his approval rating is between 75 percent and 80 percent.

"He's a man of his word. He's a man who does what he says he's going to do," says Clarisse Santiago, an 18-year-old student from Manila. "It's because of him that drug-related crime is going down."

"He's like a father for every Filipino," says Daniel Bernardo, 31, a political science Ph.D. student. "I believe in his integrity. Of course, you can't say he's perfect. He has flaws. But he's a game-changer, not a traditional politician."

Both are sitting in one of the many bars across the street from Manila's De La Salle University, where the clientele is mostly middle- to upper-middle class students. The extrajudicial killings in the war on drugs aren't much of an issue, at least among the Duterte supporters here.

"I don't even consider them extrajudicial killings," Bernardo says. "It's a moral killing, in a way. It's like a pest in your house. If you see a cockroach or a mosquito, you'd kill it. For me, if you're a drug user, a drug seller, you're a sickness in society. You need to disappear." 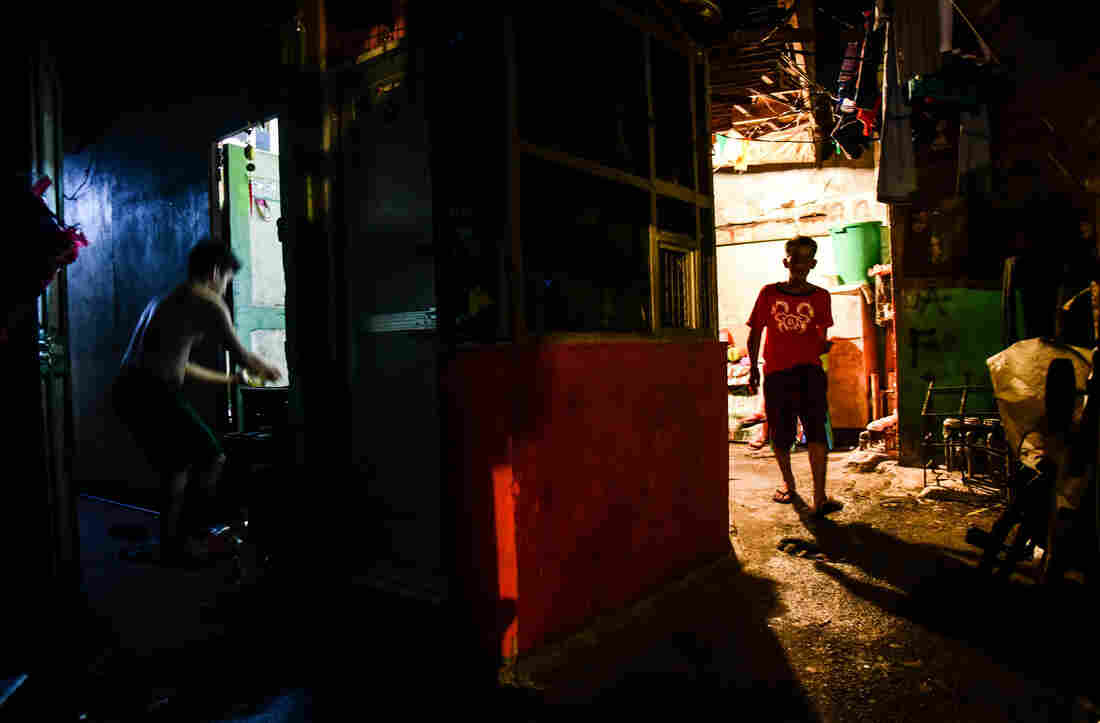 A man walks down a small street in the Arellano district of Manila. Alecs Ongcal for NPR hide caption

"It's because we have a very weak legal system and people are fed up and they want to see results, and they don't seem to mind the shortcuts as long as they get results," Diokno says.

But not everyone is on board.

"If you look at the recent surveys, support among the poor has gone down," Diokno says. "There are less of the poor supporting it because they are feeling the brunt of the extrajudicial killings."

'We're scared of the police'

Arellano, just a few blocks from the university, is a slum area I've been visiting since the drug war began last year. Before then, residents say, there was a lot of drug-related crime here.

Not anymore. The police have rounded up hundreds of alleged drug users and dealers in the past year. And more than a dozen alleged drug suspects have been killed in encounters with police.

"It's safer now, because the addicts are either gone or lying low," says Cindy Medrano, a 26-year-old mother of two.

But there's a new problem, she says: "We're not scared of the addicts. We're scared of the police and how they're harassing us, just barging into our houses and violating our rights."

Cindy's got a 27-year-old brother who recently got out of jail. He stopped at home just long enough to see his mother, she says, then left for the provinces.

"He was scared he'd be a target," she says — that he'd be killed. "He said he wouldn't come back as long as Duterte was president."

Down a nearby alley, I go to visit Sylvia Garcia, whose son Aristotle was killed in an encounter with police back in September. I ask her how it's going. 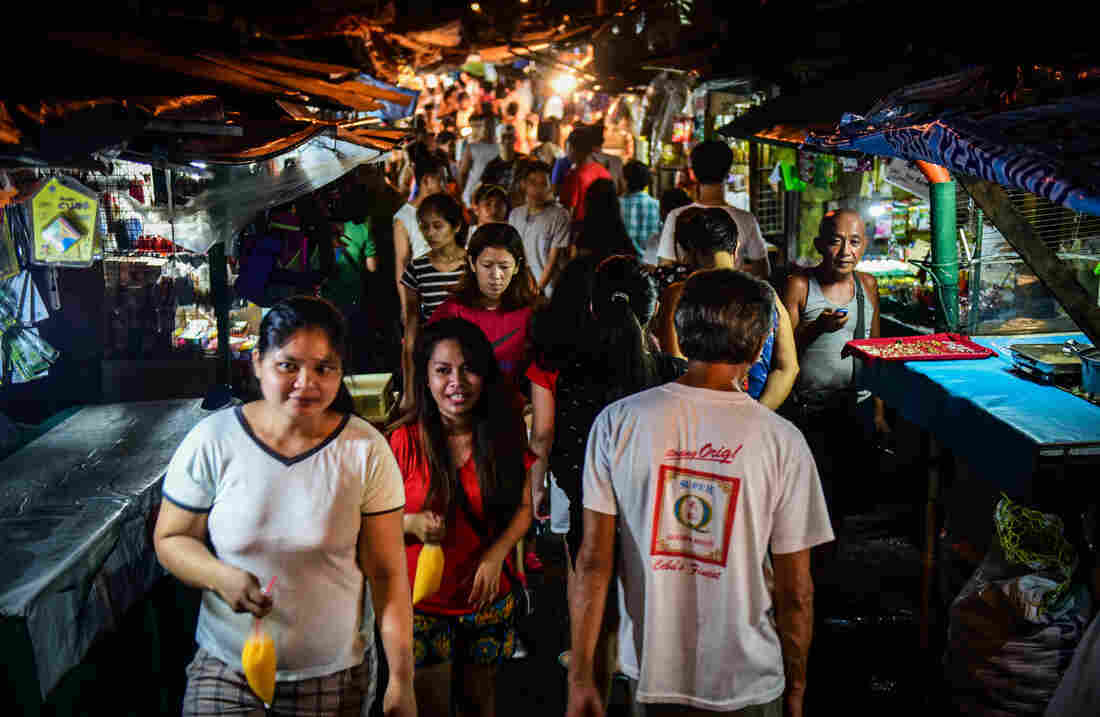 She says she's noticed that a lot of young men have moved on — or, more precisely, fled — in the past few months. Like Cindy, she says the neighborhood is quieter these days — and people are afraid of the police.

The family never believed the police explanation that Aristotle was shot while resisting arrest. Garcia says he was executed, plain and simple.

The crime scene photos didn't do much to dispel that argument. But the family didn't fight when the case was closed two days after his death.

Sylvia tells me the policeman who shot her son was killed in a drive-by shooting by vigilantes on a motorcycle a few weeks after her son's funeral.

"Karma," she says, smiling. In the absence of justice, she says, it's better than nothing.

'They can kill you anytime'

The Mallari family, who live across Arellano St. and down another alley, have given up on justice too. Marcelina Mallari's son Robert was killed by police in an alleged drug-related operation in the neighborhood a few months ago. That's the official story, anyway.

Someone on the inside has admitted Robert's killing was a mistake — that the cops were after another guy and Robert was in the wrong place at the wrong time. 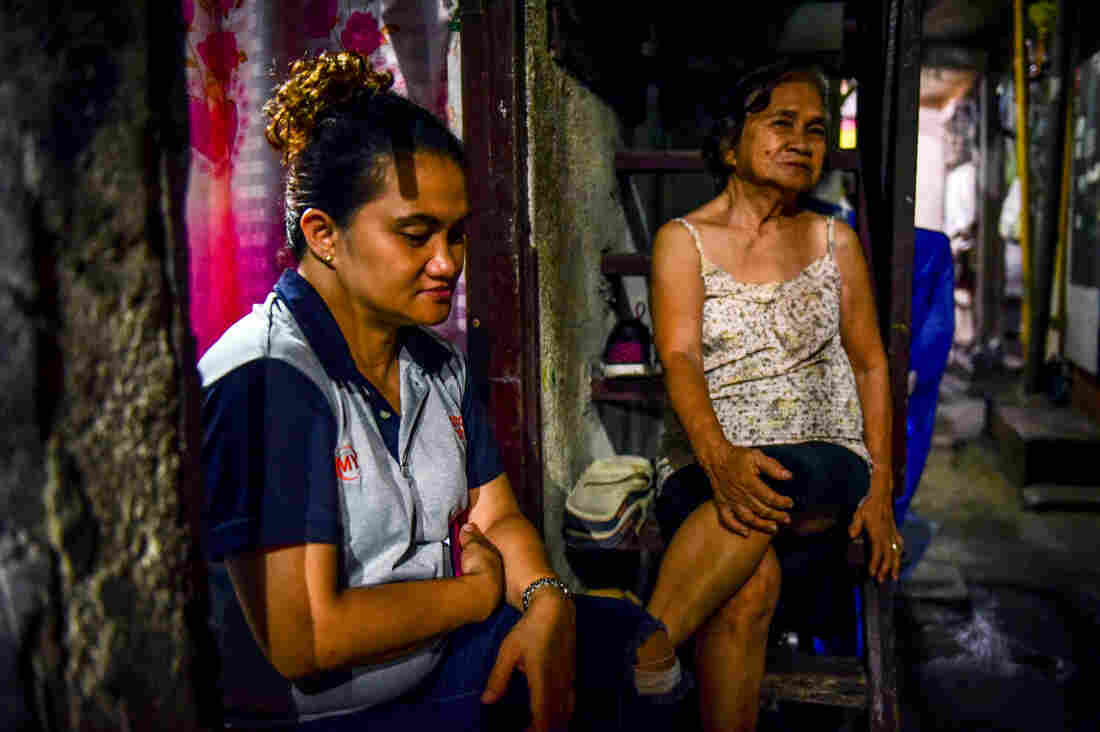 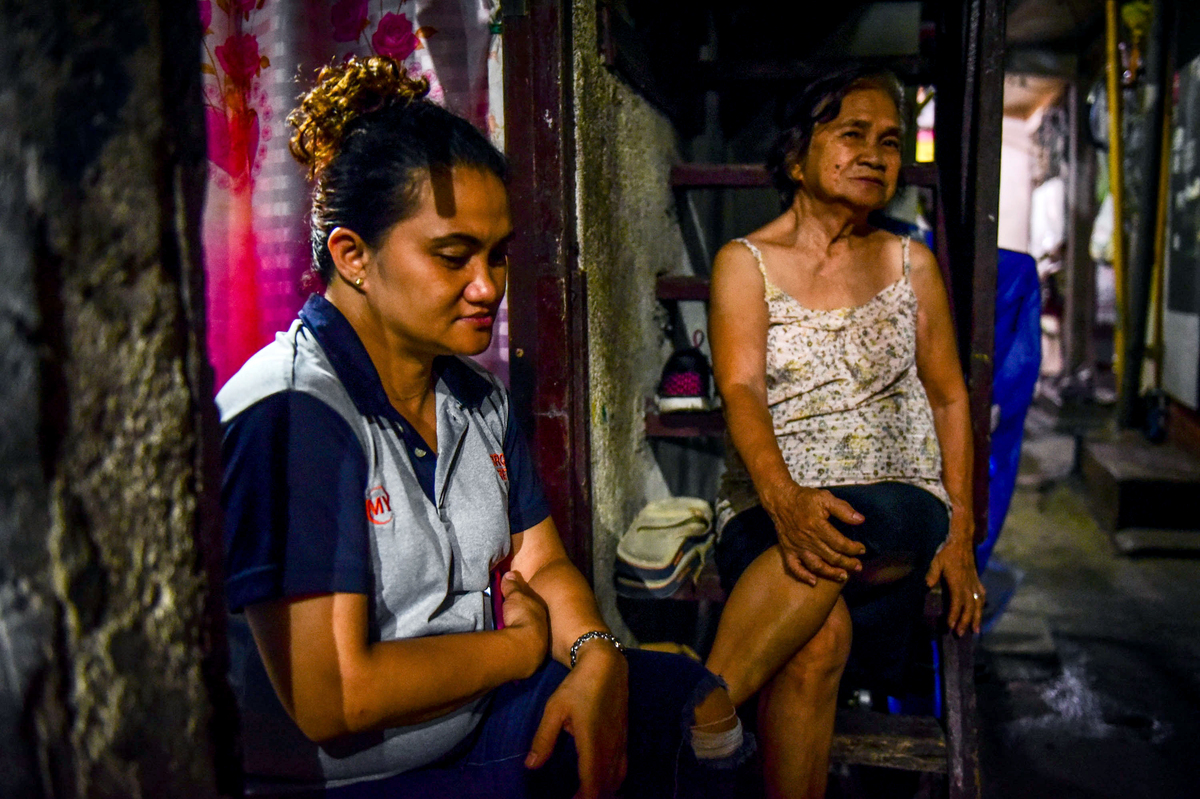 Marcelina Mallari (right) and her daughter Gina share the heartache of losing Robert, Mallari's son and Gina's brother, in the drug war.

Robert's sister Gina says she knows the police officer who killed her brother. But the family is not about to challenge the official explanation.

"We're scared," Gina says. "If they want to, they can kill you anytime, anywhere."

There are two young men in the family they still need to protect — her son and her nephew.

"That's the reason we decide to be quiet, not rock the boat anymore," she says. "What if another victim will be one of my family because we pushed for justice?"

"So you've given up on justice because you fear retribution," I say. 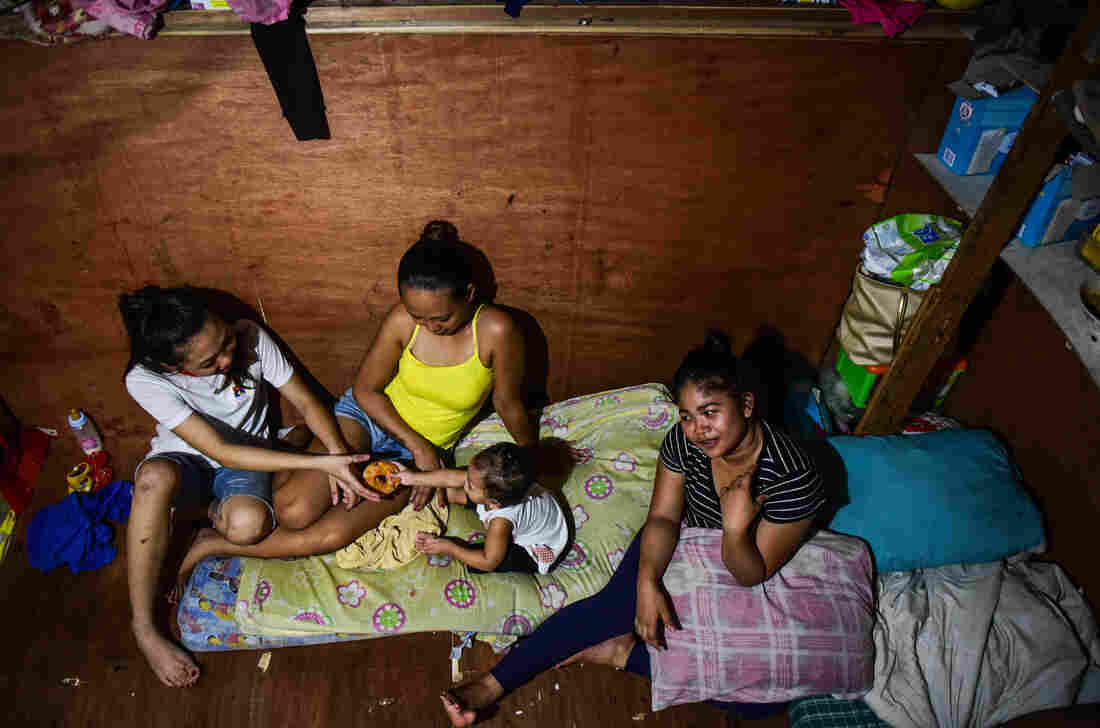 Baby Roseann plays with her two aunts and mother Rachel Quebec (far right) in their small house. Roseann's father, Clarence Jepadre, 17, was stabbed and killed last year. His body was found with a packet of marijuana and a note saying, "I'm a pusher... Don't be like me." Alecs Ongcal for NPR hide caption

About a hundred yards down the alley and around the corner, I visit Rachel Quebec. Her boyfriend, Clarence Jepadre, 17, was killed a few months back, too — stabbed nine times, then wrapped in plastic, with a packet of marijuana next to him and a sign attached to his body that read "I'm a pusher. I'm a robber. Don't be like me."

The police blamed vigilantes. The family blames the cops.

Quebec doesn't know who to blame, and she's struggling emotionally and financially. She can't get used to the idea of Clarence began gone. Sometimes their baby daughter, Roseann, will point at the door and say "Papa, papa," she says. And sometimes she and other family members feel Clarence's presence late at night.

"We believe his spirit is lingering because his case isn't solved yet," she says. "There's been no justice. Clarence can't accept what's happened to him, so his spirit just lingers here, waiting."

It's going to be a long wait. The homicide detective in charge of the case, Nino Sadsad, says the investigation is ongoing, but he has no leads. And this neighborhood is not even one of the worst affected by the war on drugs. 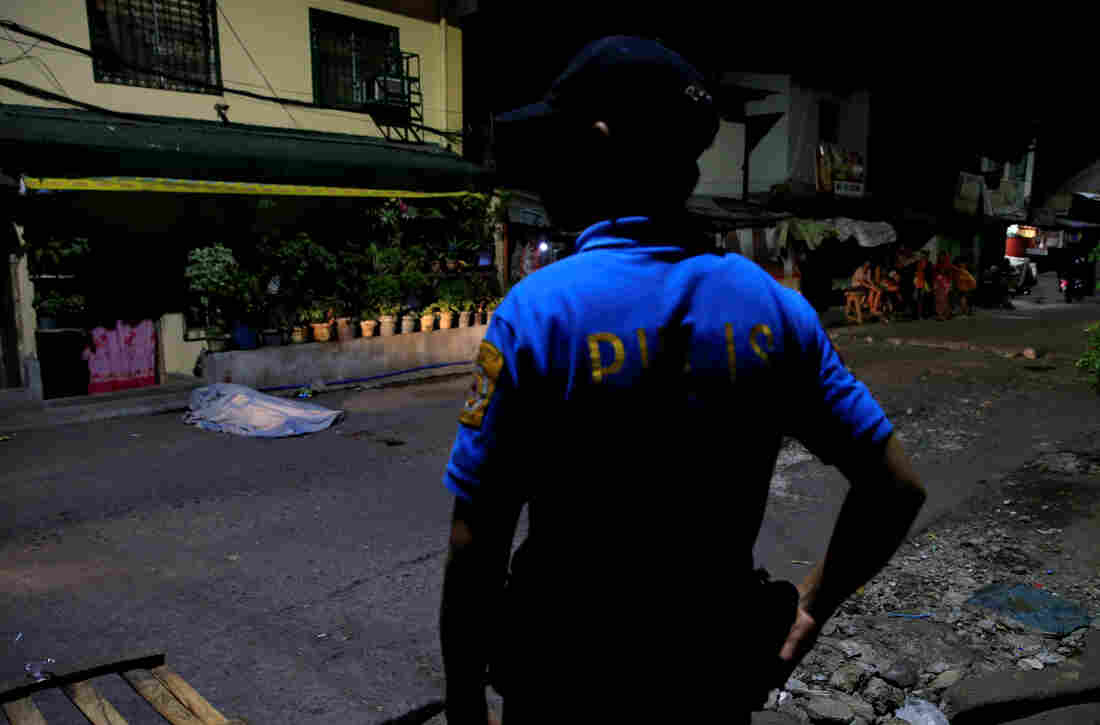 A policeman stands guard near the body of a suspected drug dealer on a street in Quezon City, Metro Manila, on March 1. Police investigators said the victim was shot and killed by unidentified men. Romeo Ranoco/Reuters hide caption

So many have come up with a workaround.

"Some relatives, some families, don't wait for the scene-of-the-crime operatives to claim the body," Diokno says. "As soon as the police or the vigilantes, or whoever is responsible, commit the extrajudicial killings, before the authorities can come, [the families] get the body and bury it so they don't have to pay."

Diokno says those killings don't get recorded. He believes many others go unrecorded these days, too. His legal assistance group receives reports from communities of people just disappearing. And nobody, he says, knows where the bodies are.

He doesn't believe the commonly accepted estimate of 7,000 dead since the war on drugs began last year, and thinks the number may be between 10,000 and 12,000.

Meanwhile, Duterte has given no indication he'll relent anytime soon — though even some of his staunchest supporters think maybe he should.

"The problem with Duterte now," says Daniel Bernardo, the Ph.D. student, "is that he's so much focused on drugs, he's missing a lot of opportunities."

By that, he means fighting corruption — another Duterte campaign pledge — and a whole lot of other priorities, like improving infrastructure and creating more jobs at home to keep people from having to work abroad. Overseas remittances — the money sent home by workers abroad — account for some 10 percent of the Philippine gross domestic product.

Meanwhile, the Philippine military is battling ISIS-linked militants on Duterte's home island of Mindanao, a challenge that will test Duterte in the months to come. But the defining factor of his first year as Philippine president is the other war — the war on drugs — which shows no sign of ending.