Accessibility links
Hot, Dry Madrid Aims For A Cooler, Greener Future : Parallels A huge, vertical garden covering the wall of Madrid's CaixaForum is both a work of art and something practical for the environment. It's among several steps the city has taken to fight climate change. 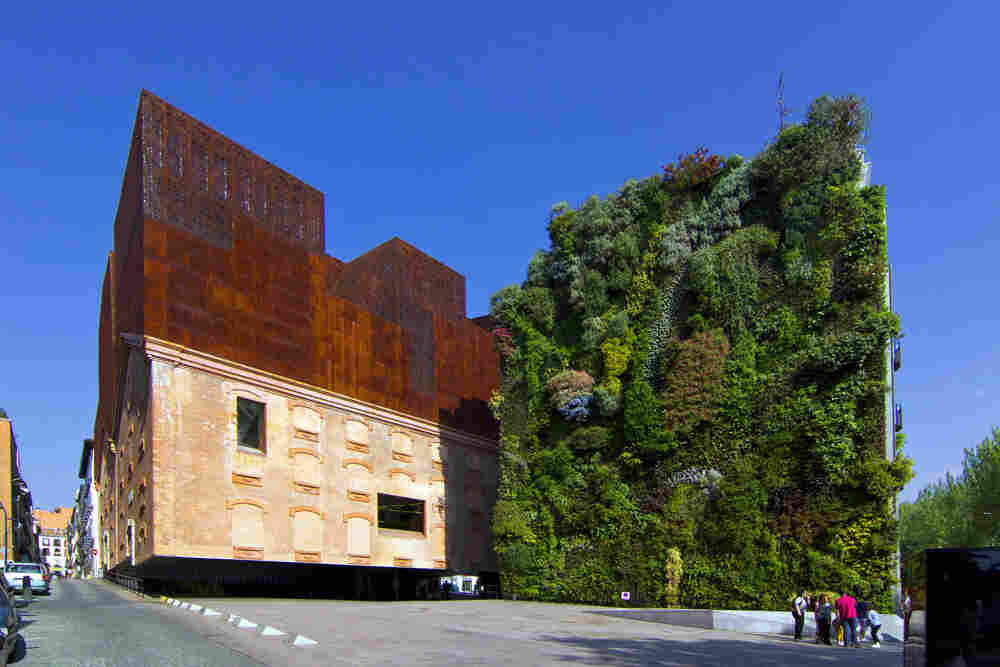 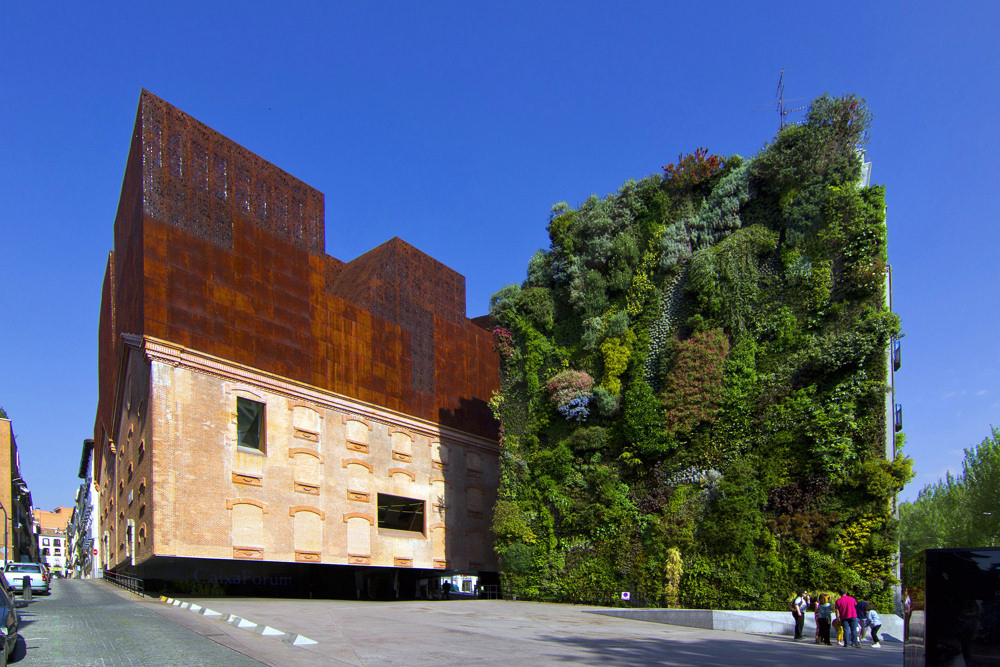 Tourists flood the area of Madrid's "Museum Mile" — a stretch of the huge, eight-lane Paseo del Prado thoroughfare that's home to Spain's most renowned art museums. It's smoggy and crowded with all the traffic.

At the CaixaForum, an arts foundation, people pause. It's what's on the outside of this museum, rather than what's inside, that's halted them: a giant vertical garden with more than 15,000 plants from 300 native species — begonias, yucca plants, ferns — coating an entire outer wall stretching the length of a city block.

"I just think it's really cool to see all the different vegetation!" says Laura Laskin, a visitor from Philadelphia.

"We honestly just ran into it by accident, but it's really cool," chimes in her daughter, Sarah. "We didn't know anything about it prior to coming here."

The CaixaForum's vertical garden is quickly becoming a tourist attraction. Installed in 2008 and designed by the French botanist Patrick Blanc, it consists of a polyurethane sheet, plastic mesh and a non-biodegradable felt blanket coating the exterior wall of a former power plant adjacent to the museum. Irrigation hoses line the top. The felt layer acts as a sponge, absorbing water and allowing the plants to take root without soil.

It's both a work of art and something practical for the environment.

Walls like this one are part of Madrid's new strategy to fight climate change. The Spanish capital is one of the hottest, driest cities in Europe — on the front lines of this battle. It's just emerging from a punishing recession and doesn't have a lot of money. 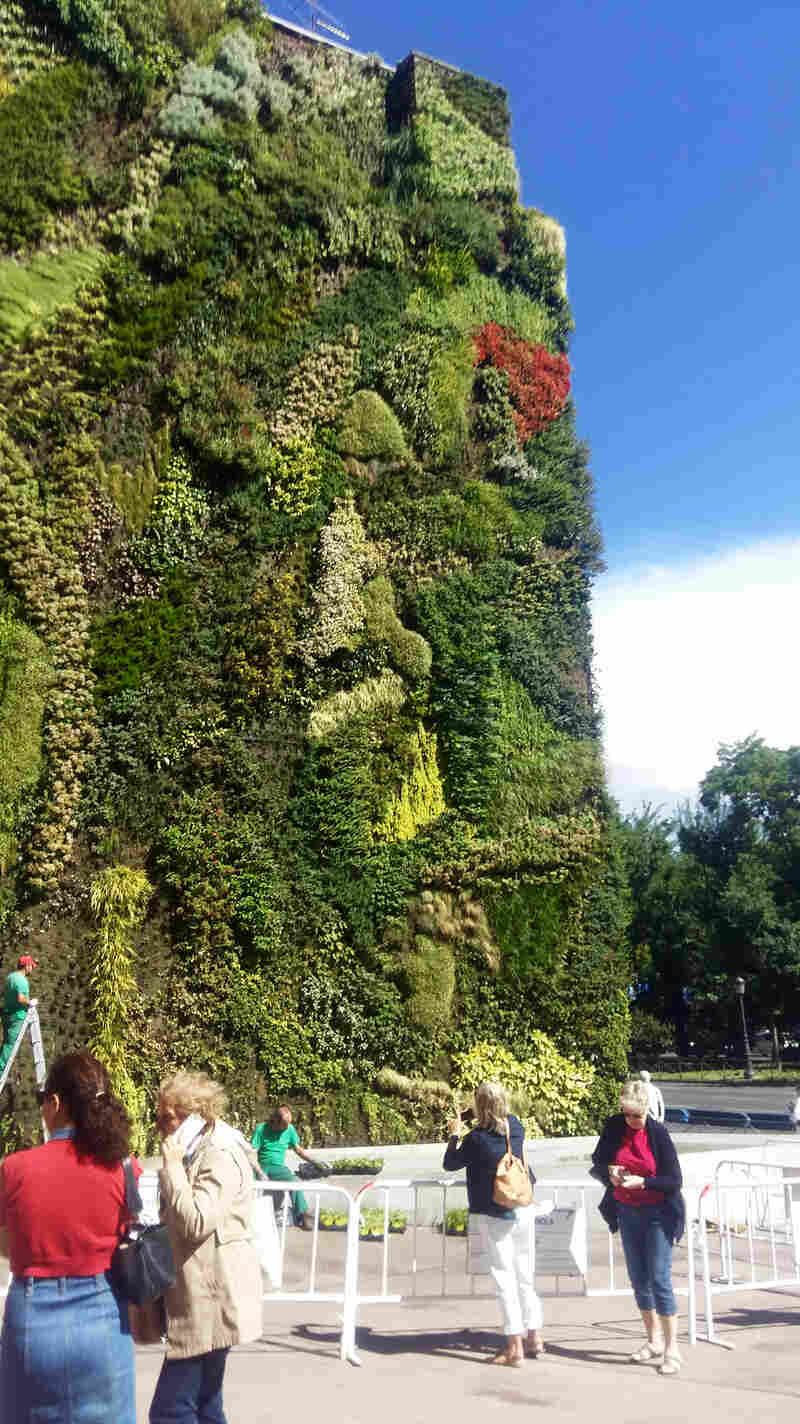 Tourists snap photos of a vertical garden outside the CaixaForum, an arts foundation in Madrid. Lauren Frayer for NPR hide caption 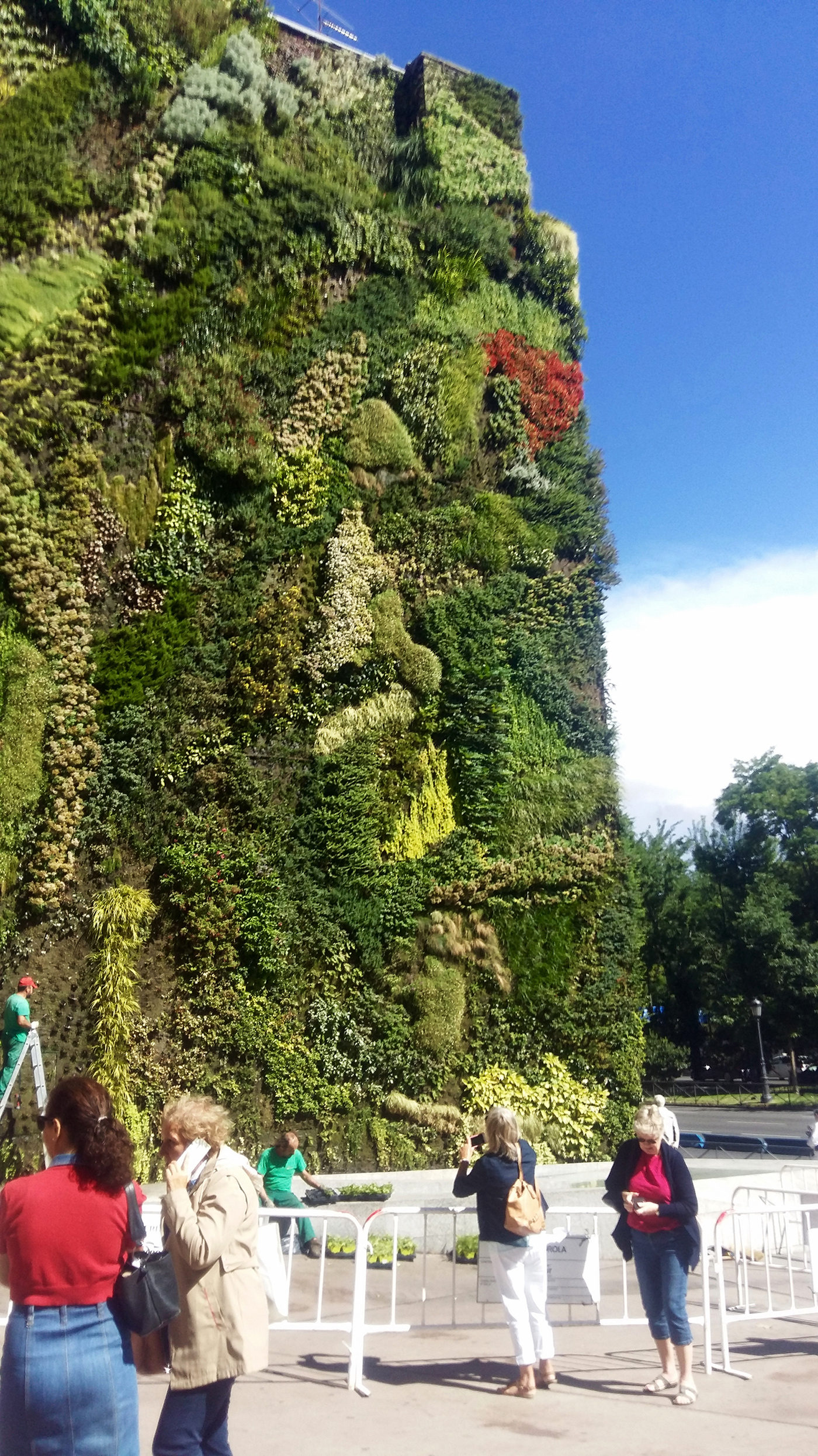 Tourists snap photos of a vertical garden outside the CaixaForum, an arts foundation in Madrid.

So the city has come up with a simple, low-tech solution: plants. Lots of them. Madrid aims to cover as much of its surface as possible with greenery — roof gardens, walls and empty lots.

"You can see it changing — in summer, it's an incredible panel of colors," says Isabel Fuentes, director of Madrid's CaixaForum. "It helps to avoid noise, and it also helps to fight contamination because 460 [square] meters of plants give a considerable amount of oxygen to the air."

The vertical garden also insulates a south-facing wall from heat in summer and cold in winter. And it helps to lower Madrid's overall temperature, by boosting green space.

Scientists recognize the importance of greenery in combating climate change, and Madrid is not alone in enlisting in the fight. When it comes to climate change, there's a lot of focus on coastal cities and the risk of flooding from rising sea levels. But Madrid is hundreds of miles from the coast, at nearly 2,200 ft. above sea level. There's no risk of flooding here. Instead, it's become a different type of island — "the heat island," says Juan Azcarate, the city official who heads efforts to fight climate change. "We are a city where the main risks will be related to heat and the scarcity of water resources."

In an urban heat island, dark, paved surfaces and buildings absorb warmth from the sun, boosting the air temperature around them. Madrid is several degrees warmer than the surrounding countryside.

In a municipal office building that's been renovated to install heat-deflecting windows, Azcarate and his team pore over climate change data. Scientists estimate that by the year 2050, Madrid will experience 20 percent more unusually hot days — in which the temperature is several degrees hotter than historic averages on that day of the year — than now, and it'll rain 20 percent less. So city officials have allocated millions of euros in public funds to to try to head that off — or at least prepare for it — by expanding existing parks, painting roofs white instead of black to reflect the sun's rays, converting vacant lots into green space and building roof gardens and walls. 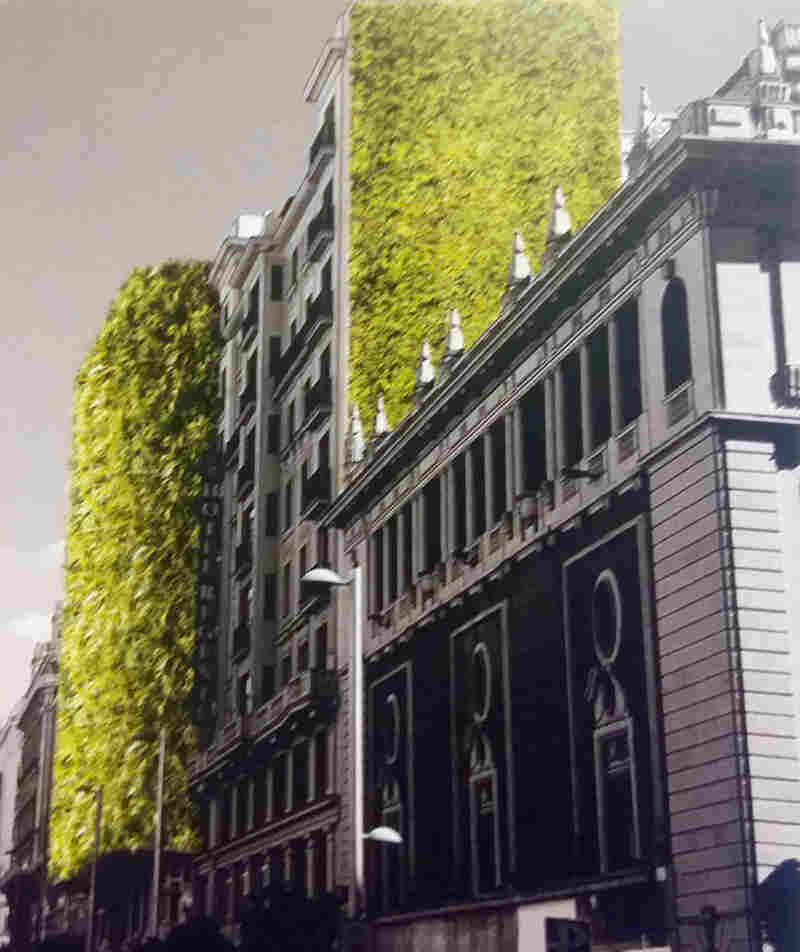 An artist's rendering of Madrid's Gran Vía, one of the city's biggest and busiest avenues, shows what the thoroughfare would look like if building facades were covered in plants. Madrid is offering tax incentives to companies or private owners willing to install roof and facade gardens, to combat the effects of climate change. courtesy of the Ayuntamiento de Madrid/Madrid City Hall hide caption 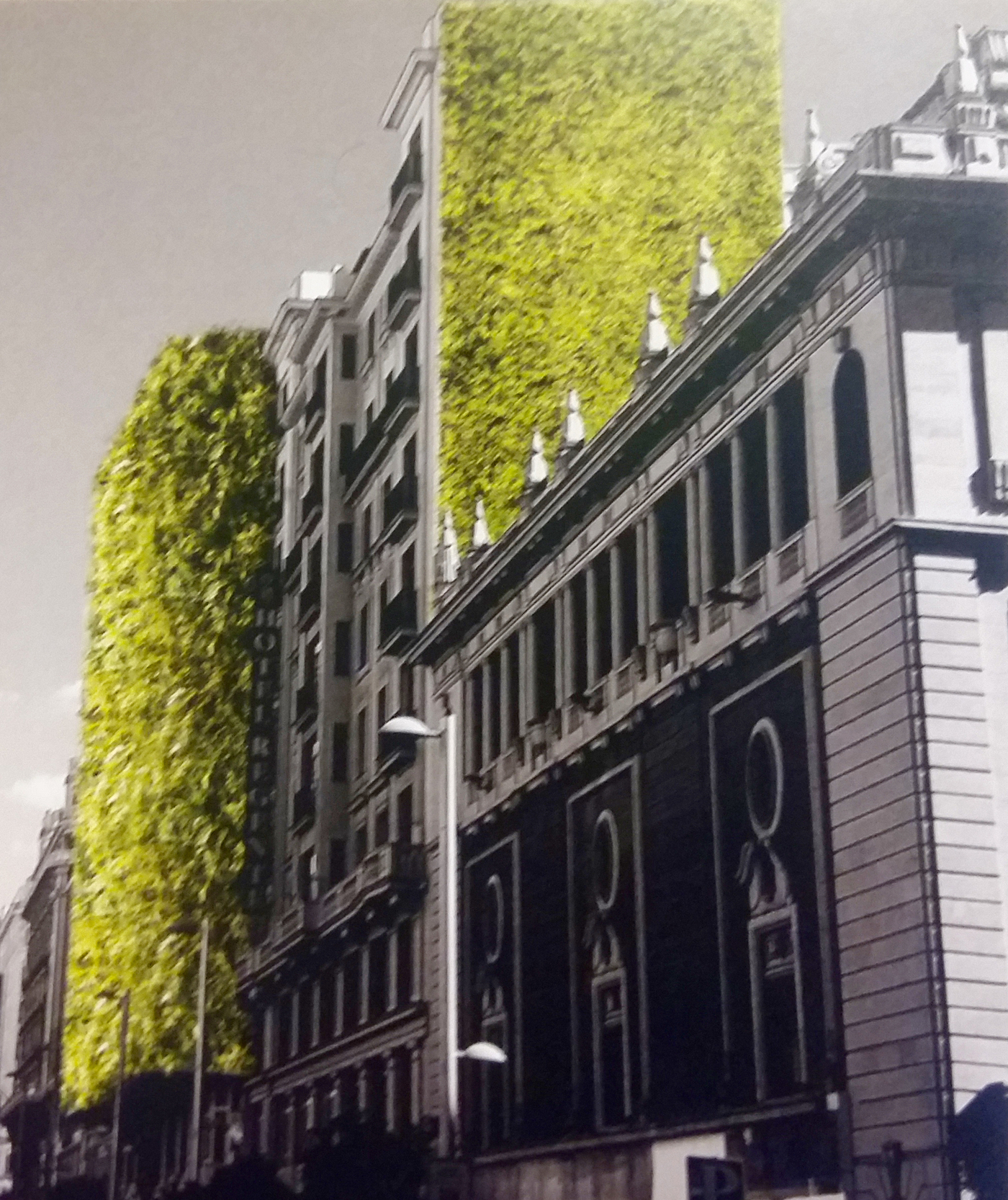 An artist's rendering of Madrid's Gran Vía, one of the city's biggest and busiest avenues, shows what the thoroughfare would look like if building facades were covered in plants. Madrid is offering tax incentives to companies or private owners willing to install roof and facade gardens, to combat the effects of climate change.

"Big, green areas have an effect of cooling the city at night, and also have an added value of capturing carbon," Azcarate says.

Greenery also shades the pavement and releases water vapor into the air. Last summer, temperatures were measured at 7 degrees Fahrenheit lower in pilot neighborhoods, where the first of these gardens have been installed, than in neighborhoods with vacant lots, black roofs and no parks.

To water them, the city is re-paving plazas with porous material that captures rainwater. There are also tax breaks for companies that coat their roofs or facades with greenery.

This is all part of a larger environmental strategy that started with burying a major city highway in 2003 — routing it through an underground tunnel and then planting trees above. The area has since become one of the city's most popular parks.

On a walk from Puerta de Alcalá, one of Madrid's busiest traffic circles, into the neighboring greenery of Buen Retiro park, Susana Saiz, one of the consultants behind Madrid's climate plans, explains that the transformation from smog to greenery is exactly what she seeks to create in her work.

"As you can feel, we just came from the noisy street and now we're just surrounded by trees," says Saiz, who did her Ph.D. on how vegetation in roof gardens can change the climate in urban areas. "It's colder. You can really feel the heat island is reduced. The climate is nicer."

Saiz works as an architect at Arup, one of a growing number of environmental design and sustainability companies that help cities like Madrid prepare for the climate future. The city commissioned Arup to prepare a report called Madrid + Natural, which includes designs the city wants to implement for roof gardens, water catchment areas and urban forests.

The goal is to create a so-called "green envelope," protecting Madrid from the effects of climate change. Arup's research shows that if 10 percent to 25 percent of city buildings were to coat their roofs or facades in greenery, it could reduce urban noise by up to 10 decibels, reduce temperatures by up to 18 degrees Fahrenheit and reduce particle pollution by up to 20 percent.

"It's absolutely quantifiable — the impact of these solutions on air pollution, mitigation of heat island, water storage and management," Saiz says, as she walks out of the park and back into a concrete jungle of traffic, heat and noise — a reminder of what Madrid is up against.