Accessibility links
Fethullah Gulen, Exiled Cleric Accused Of Turkey Coup Attempt Plot: 'I Have Stood Against All Coups' : Parallels Nearing the anniversary of the coup attempt, Fethullah Gulen tells NPR's Robert Siegel that if he were to be extradited, he'd "go willingly." As for Turkey's president: "I want to spit in his face." 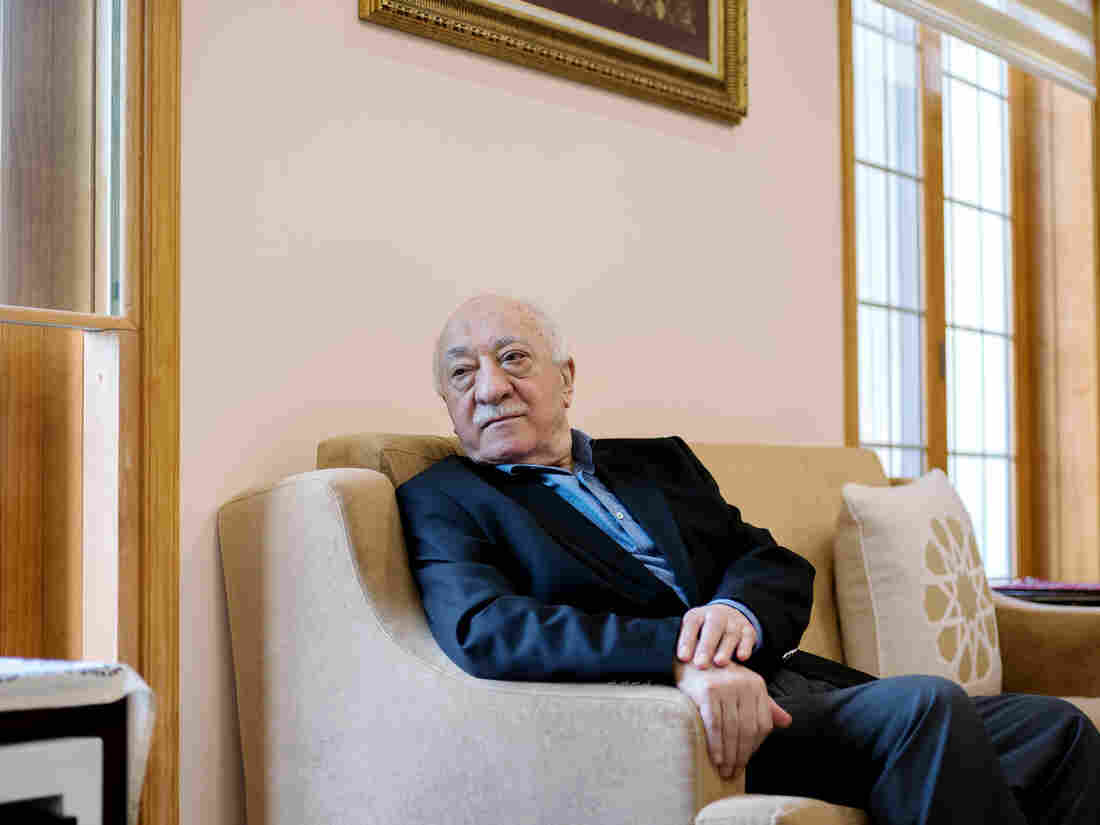 Fethullah Gulen sits in a room at his compound in Saylorsburg, Pa. He has lived in exile in the United States since the late 1990s. Turkish President Recep Tayyip Erdogan blames Gulen for last year's failed coup and is seeking his extradition. Bryan Thomas for NPR hide caption 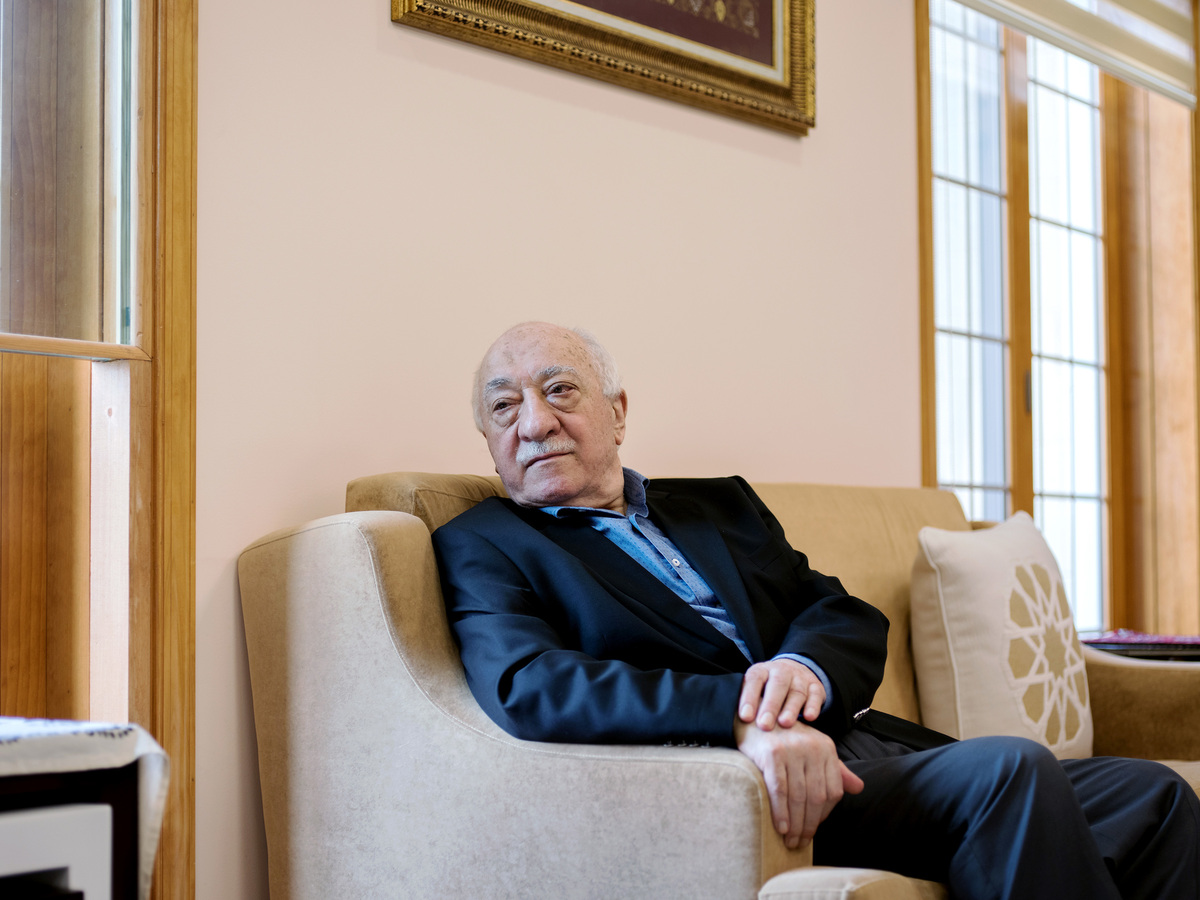 Fethullah Gulen sits in a room at his compound in Saylorsburg, Pa. He has lived in exile in the United States since the late 1990s. Turkish President Recep Tayyip Erdogan blames Gulen for last year's failed coup and is seeking his extradition.

On July 15 last year, in an attempted coup, a faction of the Turkish military bombed government buildings, blocked roads and bridges and attempted to overthrow President Recep Tayyip Erdogan. The coup attempt was quelled by the next day — but Turkey has been feeling the repercussions ever since.

The government has engaged in sweeping purges, arresting tens of thousands and firing more than 100,000 people from their jobs, including civil servants, university professors and soldiers.

But the primary target of Erdogan's wrath is Fethullah Gulen, an Islamic scholar in his late 70s living in exile in the United States. Erdogan blames Gulen for masterminding the failed coup attempt. The government has declared Gulen's movement a terrorist organization.

Gulen, who is said to have millions of supporters in Turkey, has steadfastly denied any responsibility for the coup — but Turkey is demanding his extradition from the U.S., where he has lived since the late 1990s.

"To this day, I have stood against all coups," Gulen told NPR's Robert Siegel, who traveled Monday to the cleric's compound in Saylorsburg, Pennsylvania, in the Pocono Mountains. "My respect for the military aside, I have always been against interventions. ...If any one among those soldiers had called me and told me of their plan, I would tell them, 'You are committing murder.' "

Gulen, who rarely speaks with the press, expressed concern for Turkey's future, but has "some hope," he said.

"If they ask me what my final wish is," he added, "I would say the person who caused all this suffering and oppressed thousands of innocents, I want to spit in his face."

When asked if he was referring to Erdogan, he replied: "It can't be anyone else. He is the oppressor."

NPR has sought comment from the Turkish embassy, which declined to issue a written response to Gulen's remarks.

To this day, I have stood against all coups. I suffered during the military intervention of May 27, 1960, and then again on March 12, 1971 and again on September 12, 1980, and I was targeted February 28, 1997. My respect for the military aside, I have always been against interventions. I don't know the people who attempted the July 15 coup. They might know me, they may have attended some lectures — I have no idea. Thousands of people have come here to the retreat to visit, among them 50 members of parliament, former President Abdullah Gul, former Foreign Minister Ahmet Davutoglu. ...For this reason, many people might know me, but I don't know them. ...

One other thing is I live here, thousands of miles away from Turkey. Some soldiers decided to do the coup, and despite the many questions and suspicions that remain of the government account of what transpired that night, if such claims are still taken to be credible, I shudder in astonishment. But if I were to humor that idea, if any one among those soldiers had called me and told me of their plan, I would tell them, "You are committing murder."

I think the United States is mindful of its reputation for its democracy and rule of law, and if they are willing to risk that reputation by extraditing me based on the request and claims made by Turkey, I would never say no. I would go willingly.

I am living my final years, even if they decide to kill me or poison me or bring back the death sentence to hang me. When I was a young imam back in the day, I was present at the execution of two men, and I asked them about their final wish. If they ask me what my final wish is, I would say the person who caused all this suffering and oppressed thousands of innocents, I want to spit in his face.

On allegations that his organization is secretive

The perception that I control all of this... that I tell people to do things and that they are doing them... there is no such thing. As I have said to one lawmaker, if there is any suspicion of secrecy, they should conduct deep investigations and expose it. I am not clear on what it is that is so secret, but they should send their law enforcement and intelligence services to uncover it. I firmly support that.

Before I moved here, I always lived in Turkey and was subject to many difficult situations and targeted in the numerous military coups that happened over the years. ... I never really wanted to leave Turkey, but I had some heart problems and a cardiologist at the Mayo Clinic insisted that I come here and get treatment. So I traveled here and while I was in the hospital, a prosecutor in Turkey opened a case against me, so I was advised to remain here until things calmed down, but they never quite did.

I don't want to be perceived as pretentious to Americans for speaking to an American outlet and for what I'm about to say, but I have always carried an admiration for the United States for its democracy and its leadership of the world. I had freedom here and for that, I decided to stay here. And a few years later, I received my permanent residency, and as such I am still here and I think it was a wise decision.

I haven't ventured out of the retreat much, only to come and go to the hospital, as I prefer tranquility.

On what he foresees for his movement's future

[Erdogan] thinks that if he can eliminate me, everyone else in this movement will dissolve. ... Erdogan thinks if he gets rid of me, he thinks ending me will end the movement. He couldn't be more wrong. We are mortals, we will die one day. But this is a movement of love and dedication to humanity and God willing, the people who use their rationality and free will shall continue doing their great work.

On his hopes for Turkey's future

I am neither a sociologist nor a psychologist, but you don't have to be one to see that Turkey is in a vortex of problems, isolated from the world. Diplomacy has been replaced by profits and benefits. ...

The whole world has borne witness to this. From this perspective, I don't see a bright future for Turkey. It pains me, but I have some hope, I pray for it to be better. It is a blessed country, a NATO member, and was an E.U. candidate. These were things we wanted — to see progress in the democracy, to see respect for diversity of thought. ...

Turkey is a diverse country ...I think that democracy is the ideal system for a country with a social foundation such as this. My view is based on my belief that everyone should be able to comfortably live what they believe, and this is only possible in a truly democratic environment. I am insistent in my views and I strongly believe in what I say.

In addition, I have previously expressed to others that the Turkish constitution should be modeled on the American constitution. America is a non-homogenous society of more than 300 million governed under such a constitution. It would be very effective for Turkey.