Accessibility links
A Year Later, A Divided Turkey Remembers Failed Coup Attempt : Parallels A year after the failed coup, President Erdogan honored the civilians who died resisting the effort to overthrow his government. "We will not forget, (and) will not let it be forgotten," he said. 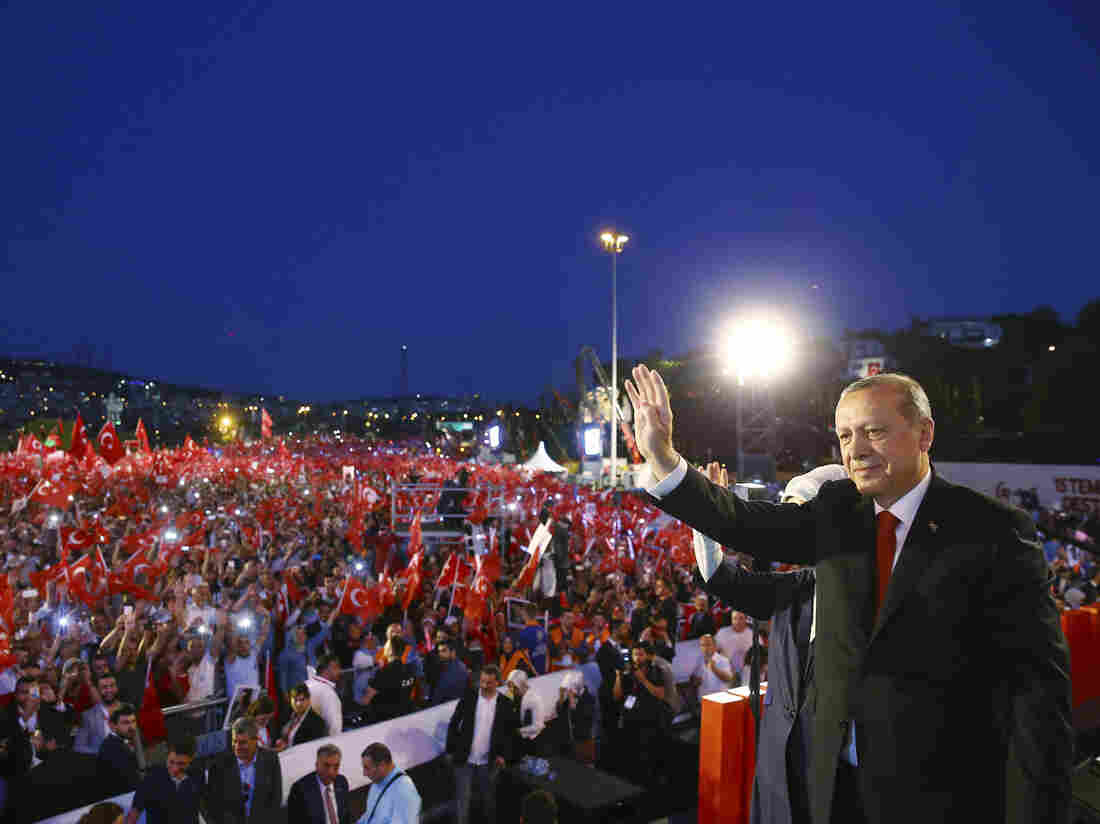 Turkey's President Recep Tayyip Erdogan waves to his supporters as he arrives to commemorate the one year anniversary of the July 15, 2016 failed coup attempt, in Istanbul, Saturday. Pool Photo/AP/AP hide caption 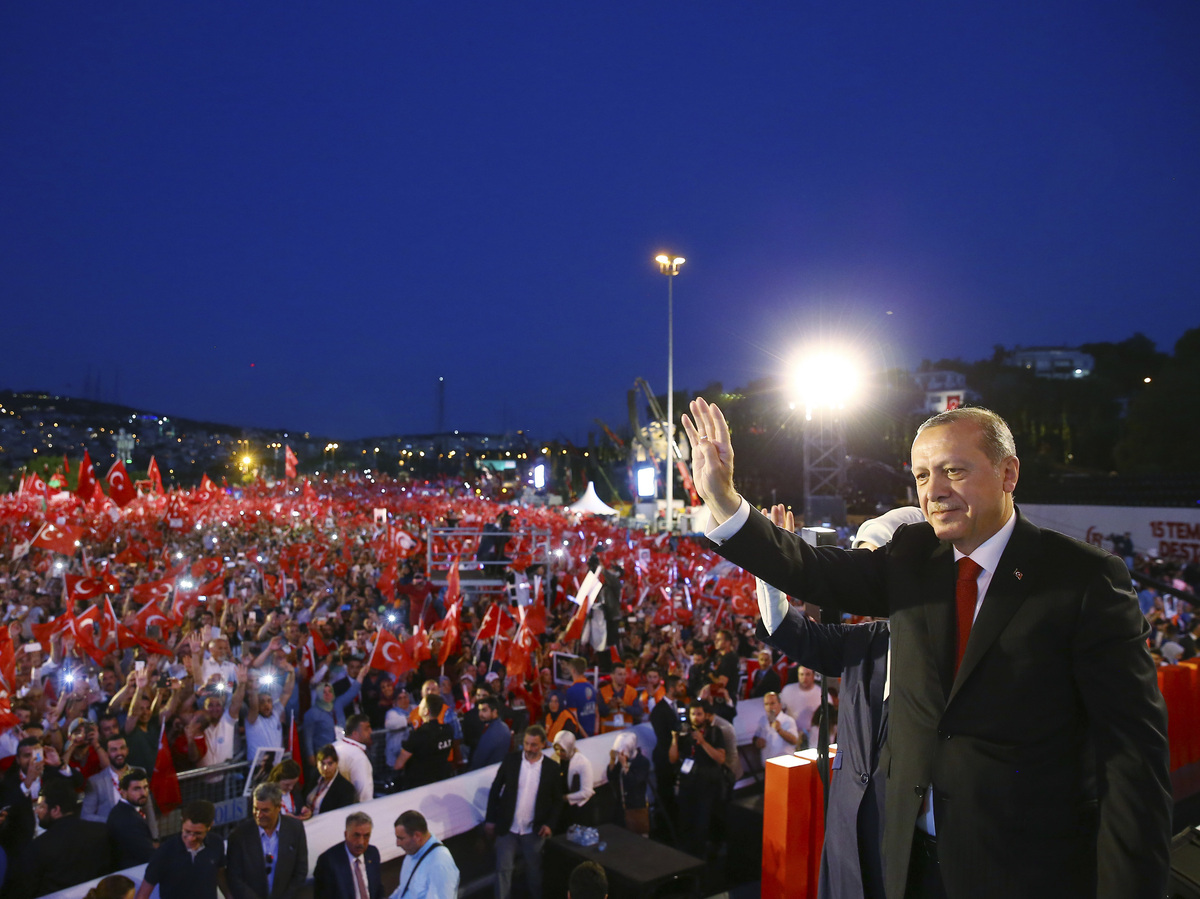 Turkey's President Recep Tayyip Erdogan waves to his supporters as he arrives to commemorate the one year anniversary of the July 15, 2016 failed coup attempt, in Istanbul, Saturday.

This weekend, people across Turkey are recalling the shocking attempted coup of last July 15 and remembering the 249 civilians who died resisting the effort to overthrow the government of President Recep Tayyip Erdogan.

The government has declared a national holiday, "Democracy and National Unity Day." But Turkey remains deeply divided a year after the coup attempt, and the sweeping crackdown that followed.

Erdogan addressed a huge crowd in Istanbul Saturday night from one end of the Bosphorus Bridge linking Asia and Europe. The bridge has been renamed the July 15 Martyrs Bridge, and for people across Turkey's political spectrum it remains a point of pride that a military coup was stopped by popular opposition.

It wasn't entirely unarmed popular opposition that won the day – police and loyalist military personnel helped round up the renegade soldiers. But in the popular imagination it's the image of civilians facing off against tanks and automatic weapons that lingers.

Before inaugurating a memorial to those who died, Erdogan said the events of a year ago will never be forgotten.

"We will not forget, (and) will not let it be forgotten," he said. "If we do not learn the lessons from July 15th, new July 15ths will be inevitable."

The president also promised to "chop the heads off the traitors." Currently there is no death penalty in Turkey, but Erdogan has spoken of bringing it back despite warnings from the European Union that such a move would kill off Turkey's bid to join the union.

At a series of events marking the anniversary, Erdogan has shrugged off criticism of the ongoing purge that has seen roughly 150,000 people suspended or sacked from their jobs, and more than 50,000 arrested to face charges. Critics say the purge, made possible by a state of emergency that grants the government sweeping powers, has targeted Erdogan's political opponents as much as suspected coup conspirators.

Erdogan also dismisses calls for bringing an end to the state of emergency a year after the failed coup.

"We will not allow the West to determine the time frame of the state of emergency, we will determine that for ourselves," he told an audience in Ankara this week. "This nation gave us the authority, and we are implementing it."

Erdogan and other officials say the emergency, due to expire this week, will be extended for at least another three months. No official has been willing to put a date on when it might be lifted. 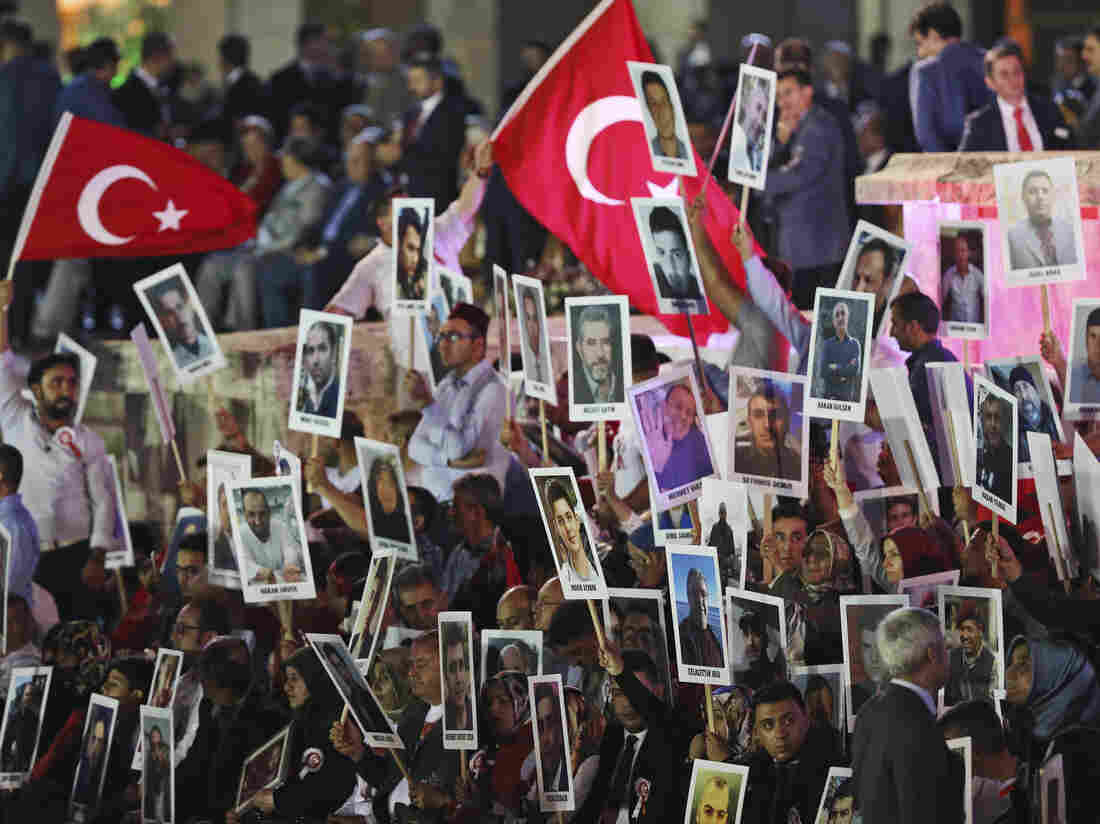 People hold photographs of the victims of the July 15, 2016 failed coup attempt, during a ceremony to commemorate the one year anniversary in Turkey's Parliament in Ankara, Turkey, early Sunday, July 16, 2017. Ali Unal/AP hide caption 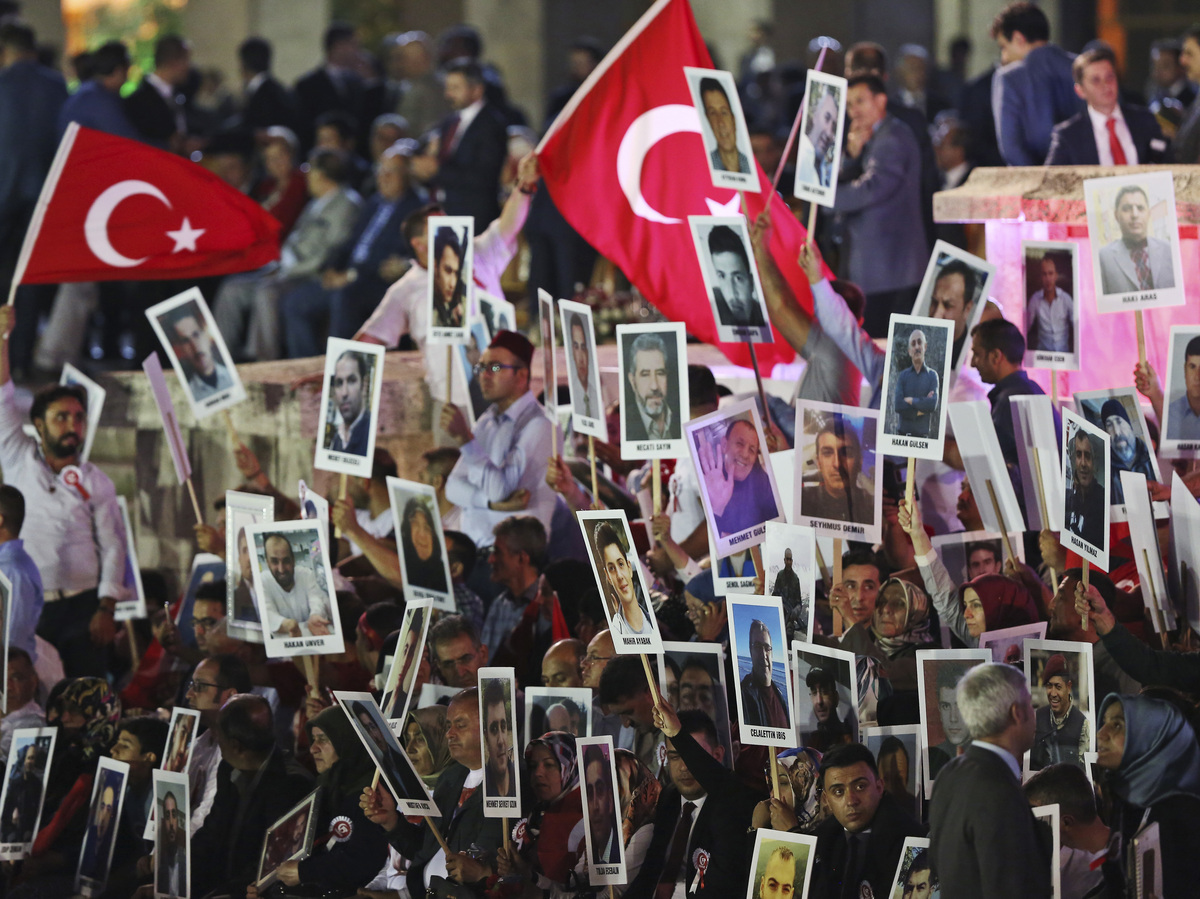 People hold photographs of the victims of the July 15, 2016 failed coup attempt, during a ceremony to commemorate the one year anniversary in Turkey's Parliament in Ankara, Turkey, early Sunday, July 16, 2017.

Those caught up in the purge say it's like having your life pulled out from under you overnight.

Twenty-eight-old Muhammad Sevinctekin was a high school literature teacher in Istanbul. He's from a conservative family and was himself a former Erdogan supporter, until his political views shifted to the left. In February, newly-married with his wife five months pregnant, he woke one morning to find he'd been sacked by emergency decree.

"All my close friends vanished - even the ones with safe civil servant jobs, they thought the firings might be contagious," he says. "That's what it's like here these days – they can just kill your career, end it like that."

When pressed on how the authorities decide whether people are supporters of the Gulen movement (known in Turkey as FETO, for "Fetullah Terrorist Organization"), officials point to things like Bylock. That's an encrypted messaging app for smartphones that the government says was used by the coup conspirators. Some Bylock users have admitted ties to the Gulen movement, but IT experts point out the app was widely available on commercial app stores, and may have been downloaded by more than 200,000 people.

Other triggers include having an account at Bank Asya, a bank linked to the Gulen movement, or signing a petition calling for an end to Turkey's armed conflict with Kurdish militants in the country's southeast.

Sevinctekin says none of those criteria, vague as they are, apply to him. The only reason he can come up with for why he was sacked is his membership in a teacher's union known for its opposition to many policies of the ruling AK Party.

"We voice our opinions publicly," he says. "But these are political differences, not a threat to national security."

Recently there has been some pushback to the crackdown. The People's Republican Party organized a "March for Justice" from Ankara to Istanbul and staged a huge rally not far from where some of the purge victims are jailed. But activists say it will take sustained pressure – from the international community as well as the Turkish opposition – to have an impact on a government that at the moment seems more powerful than ever.